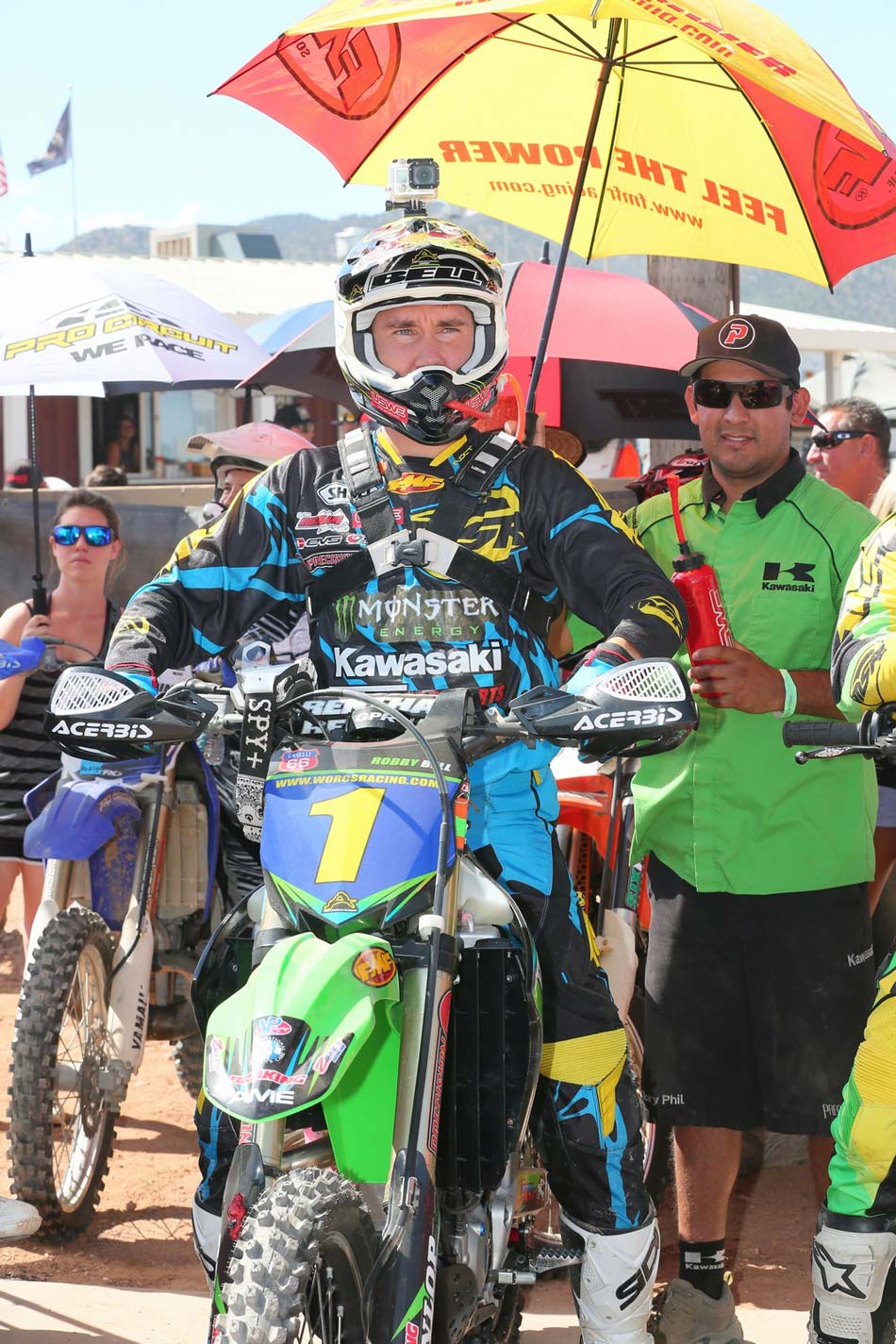 With the sudden closure of Pala Raceway, the scheduled destination of the sixth round, the WORCS crew picked a brand new venue to play host: Iron Mine race park in Cedar City, Utah. What awaited the racers was a very fast, wide racecourse that flew around the surrounding desert, interconnected by the motocross track and a secondary track that felt a lot like a serpentine. 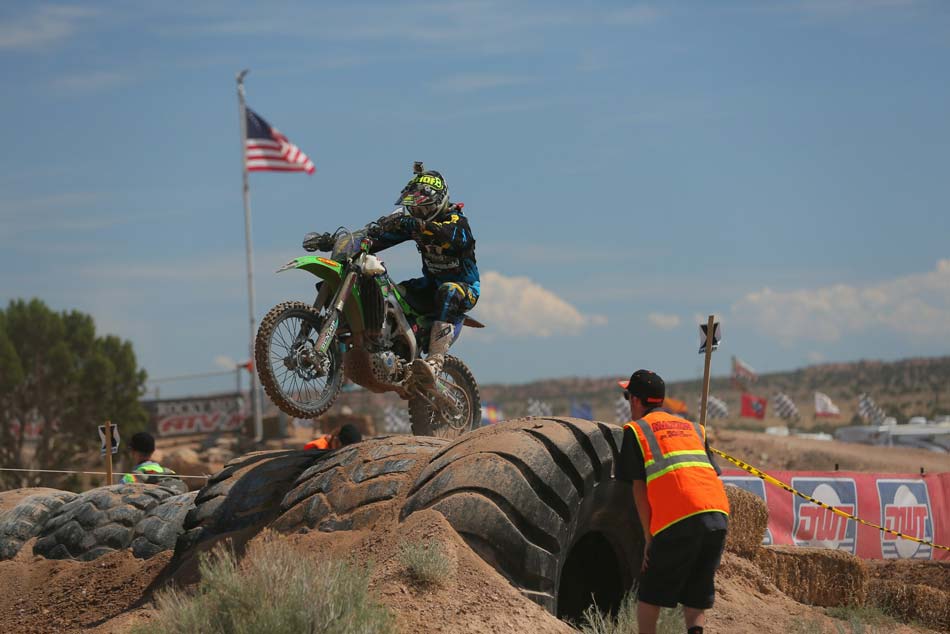 Adding some extra excitement to the already very competitive pro class was the presence of factory KTM riders Taylor Robert and Ivan Ramirez and Honda’s Colton Udall and Mark Samuels. I always enjoy racing against Taylor and was stoked to have another chance to push myself to try and beat him. I was also hopeful that a couple of the new arrivals would play a bit of a spoiler in the championship and finish in between myself and Gary (assuming of course that I could beat him) as I had a bit of a points gap to make up.

For the first time since the first round in Taft, CA we would be using the cement gate start; I was happy to be doing a motocross-style start once again, but in the back of my mind I was a little bummed to not be doing dead engine since my technique has been improving lately. With temperatures flirting with 100 degrees during the weekend the dust would definitely play a little role; the WORCS boys did a god job of trying to keep the dust down, but the track was expansive and it was a tall ask to keep everything wet. As always, a good start would be crucial.

We sat on the line, waiting for the thirty-second board to fall sideways, and as it did a deafening roar of four hundred fifty cc motors built their revs. The gate dropped and released us onto the course; I had a decent jump, but Taylor and a couple other riders popped off the gate a little quicker and I found myself pinched back around sixth position. In the chaos of the first few corners I lost a spot to Gary Sutherlin, gained a position past Justin Seeds, then Eric Yorba when he slid out and finally Justin Jones as he did an unintentional freestyle maneuver in the Endurocross section right in front of me. As we sped into the desert section I had settled into fourth place with Taylor leading, Ivan Ramirez second and Gary just ahead of me in third. 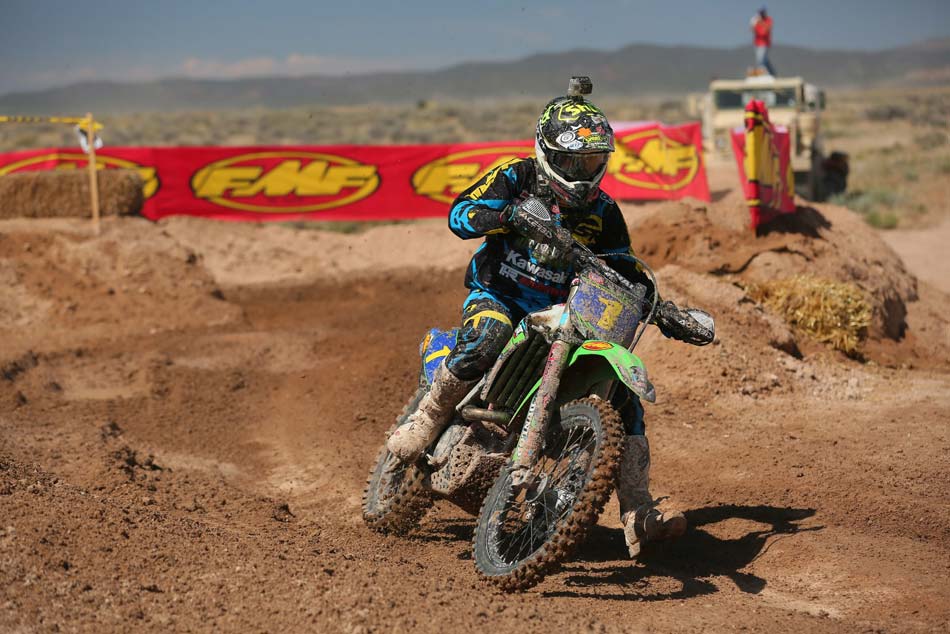 I played the first couple laps slightly on the cautious side; some of the freshly watered sections were really slippery and I chose to build my pace rather than risk sliding out or going too hard and pumping up. In hindsight I would have been better served to just go for it from the off and trust myself, and my fitness, a little more.

By the third lap I had caught up to the back of Gary and started lining him up to make the pass. I was starting wide, squaring him up and trying to out brake him corner after corner, but he had enough entry speed to keep me at bay. Finally I ran it in deep behind him through a sweeping right-handed corner that led down a fifth gear straight in the hopes of carrying more momentum and a better drive down the straight. My plan worked and I slowly motored up alongside Gary, then slightly past him and as I cleared his wheels I edged over on him just a little bit to take the line away and make sure he couldn’t recover his speed and battle back up alongside me. With the pass made, I set my sights on Ivan.

It took another lap to catch up to the back of Ivan, and then I got a bit of a gift when he slid out up ahead of me. He was able to remount fairly quickly, but I was suddenly all over the back of him, looking for a way by. Ivan tried to up his pace to keep me at bay, but after making a couple mistakes he made the decision to lift and let me by. It was a welcome surprise that he allowed me by as I had already lost around twenty-five seconds to Taylor; I had my work cut out for me if I hoped to take the win.

I pushed myself incredibly hard, dropping my lap times over the next few laps and actually turning my fastest lap of the race on the seventh time around the circuit. I had cut Taylor’s lead down to around fifteen seconds when he came into the pits and it was enough for me to overtake him for a lap as I waited to pit the following lap. It actually surprised me that he pitted a lap early and when I heard a bike right behind me I remember thinking, “who the heck is this!?” A quick glance over down a long straightaway revealed a charging number thirty-three and I remember thinking “Game on!” 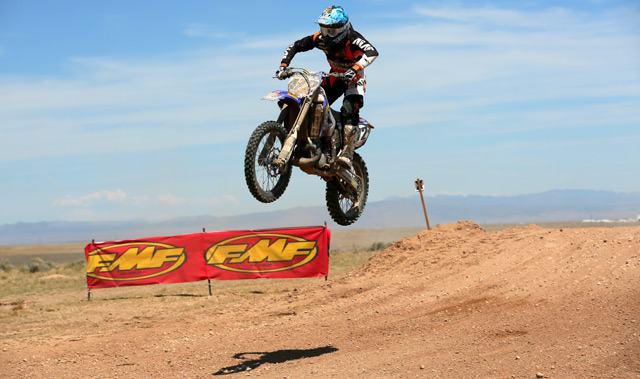 I held the lead that lap, but I handed it straight back to him as I came in for my pit. Then just for giggles I stalled the bike during the gas stop, losing a few valuable seconds in the re-firing process, and I left the pits just under twenty seconds back with a few laps remaining. I once again set myself to the task of reeling him in and could see that over the next couple laps I was getting closer little by little.

As the white flag flew I had caught to within five or six seconds of Taylor and had all the confidence in myself that I was going to hang it out in the desert and have one heck of a last lap battle for the win. As we neared the Endurocross section I could see Taylor just up ahead of me and threw the bike hard into the right-handed rut. Unfortunately there was an embedded rock on the inside of the rut and I leaned the bike too hard into it, clipping the rock with my frame and popping my rear tire out of the rut. Without warning I was spinning sideways and had slid out. I kept the bike running, but the off-camber nature of the corner kept me from remounting quickly and I lost eight or nine seconds in the crash. I put on a charge for the rest of the lap, hoping Taylor might make a mistake, but he was as solid as always and I was forced to settle for a second place finish.

I was very frustrated as I crossed the line, feeling as though I let my shot at the win slip away on that last lap, but all in all I’m very happy with my performance on the day. I also did get that little bit of luck in the championship and closed the gap on Gary to eleven points. It was an unfortunate circumstance for him, however, as he had to deal with some bike issues which forced him back- never really a situation you want to take advantage of, but it is part of racing. So moving forward, there’re three WORCS rounds left and I just need to focus on winning each of them to keep the pressure on.

I definitely want to thank my team: Precision Concepts, Alamo Alarm, Kawasaki, and all of my supporters for whom I’m so appreciative: MSR mx, Shoei helmets, Sidi boots, SPY goggles, FOCUS apparel, FMF, THR Motorsports, EVS sports, USWE sports, Northland Motorsports, Ryan Abbatoye Designs, BRP, ATP Mechanix supplements and Jan’s Towing. Thanks to my mechanic Phil for working his butt off over the weekend taking care of my “high-maintenance” needs. I want to congratulate Taylor on the win and also my teammate Justin Seeds on a well-earned third place finish- his third podium in a row. Finally I want to thank the WORCS staff for all of their hard work on the weekend; running around the course all day making sure everything ran smoothly in the hundred-degree heat was an unenviable task. See you guys in Washington!