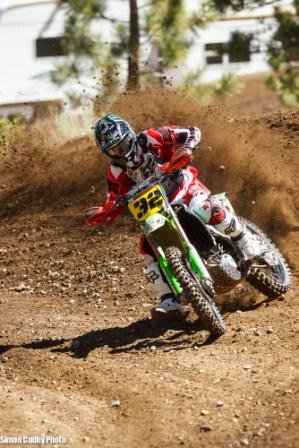 The Mammoth Motocross is one of my favorite races and a must-do every year.  The course never changes, but that doesn’t take away from the fun factor of the sweeping corners, technical “S” section and steep hills of the infamous Mammoth circuit.  The scenery just adds to the experience and most people use it as an opportunity for a mini vacation, an escape full of mountain biking, fishing, hiking, golfing and (if you’re in to this kind of thing) a bit of dirt bike racing.

Friday was the Open race day and after practice I was feeling really good going into the first heat.  I got a bit of an eye opener as the pace in the heat race was quicker than I was expecting and I qualified 7th.  The team made some positive changes and I headed off to the start of the Open Pro Main.  I’ve had a history of mid pack starts at Mammoth as I’ve never quite been able to figure out how to get off the line at the elevation Mammoth offers.  With all of my focus on getting off the line well I had planned on rolling the gate to get a slight advantage as it dropped.  The start procedure is quite routine and you can almost count three seconds from start board going sideways to gate drop every time.  Unfortunately for me this was the exception as the gate was held slightly longer and I had to check up before I ran into the gate.  Of course the moment I checked up, the gate dropped and I was hosed up the start straight, doomed to come around in the teens on the first lap.  I made some quick moves but lost one of the breaks in the chain; I liken the first couple laps to a long chain of riders and there’s destined to be some breaks in the chain as some racers have more pace or better lines.  The key is to be up front in the first group as once the chain breaks between packs of riders it makes it tough to gain much time as you’re making your way through.  I found myself around tenth behind Brian Sjogren at about the halfway mark and could see I had a little pace on him.  I was applying the pressure, going outside and in and finally in the horseshoe corner I was able to duck inside and take ninth for my own.  From there I was on the wrong side of the chain and had bit of a gap to make up to the seventh and eighth place riders: Zach Peddie and Alyas Wardius.  I caught up to Wardius and was able to make a quick outside-in move by and into eighth, but with the laps winding down I was running out of time to make much more progress.  The white flag flew and I was right on the backside of Peddie, looking for the slightest opening to make my move.  Across the start straight and through the next left handed corner I had a great run up the big uphill.  Zach heard me coming and moved over to pinch me off, but I wasn’t about to lift on the throttle and our elbows almost touched just before the top of the hill.  Over the top I was on the outside and made a quick pivot to shoot underneath him and in his haste to block the line he lost his front end and went down, handing me seventh place.  From there the gap in the chain was about nine seconds up to Christian Craig and I came through the checkers in seventh.

For Sunday’s 450 race day I knew I’d need to figure out my starts, but it didn’t quite work in the heat race and I had to come from around 12th to finish in fourth.  The finish gave me a pretty good pick on the line and I decided to change up my starting procedure and give first gear a try.  It turned out a bit better and I finally had a top ten start to work with.  I made a couple quick moves and came around the first lap in 7th.  From there I made quick work of Chris Plouffe, as I was able to out brake him down the hill and took sixth.  From there I made my way around Wardius, who enjoyed another good start and Austin Burns fell, putting me in fourth place behind Joey Savagty, Dillan Epstein and Brian Sjogren.  The next lap Savagty suffered a horrible crash and dropped out, putting me in third and later that same lap Dillan slid out, but was able to pick his bike up right in front of me.  I was just a couple of seconds out of the lead and was pushing to make a move on Dillan when my bike suddenly started to sputter and burp.  I hoped it would sort itself out, but the problem persisted and I lost third to Craig.  With my handicapped pace Tokarski made his way by and I could do nothing about it.  I turned to damage control as I was now just trying to salvage a top ten finish to get another bear trophy.  Savage made his way by and then Plouffe and Scharer, as I was becoming a frustrated figure.  On the last lap I lost eighth place to Nathan Tiearney, but was able to hold ninth to the finish and salvage my top ten.

Needless to say I was extremely disappointed with how the 450 Pro Main turned out; I showed some speed and had the top step of the podium in my sights only to have a bit of bad luck force me backwards.  In today’s technology the bikes can be a little finicky and something in the wire harness had a little issue causing the bike to cut out.  It’s an unfortunate part of the modern dirt bike, but it’s always a possibility in motorsports competition and we’ll be better prepared at the next event.  All in all I had a blast all weekend and used it as a bit of a tune up race for the Washougal National that I’m going to hit next month.  Big thanks to Monster Energy, THR Motorsports, Precision Concepts, Kawasaki, Fox Racing, Asterisk, Hookit.com, John Burr Cycles and all of the fabulous team sponsors we have.  Special congratulations to my fiancé for graduating from her Dental Assisting Program, I know how hard she worked for it.  From here I have the Pala WORCS race to look forward to; I like the track and the off road should be fun and favor my skillset so I’ll be looking for my first WORCS win.  See everyone there!