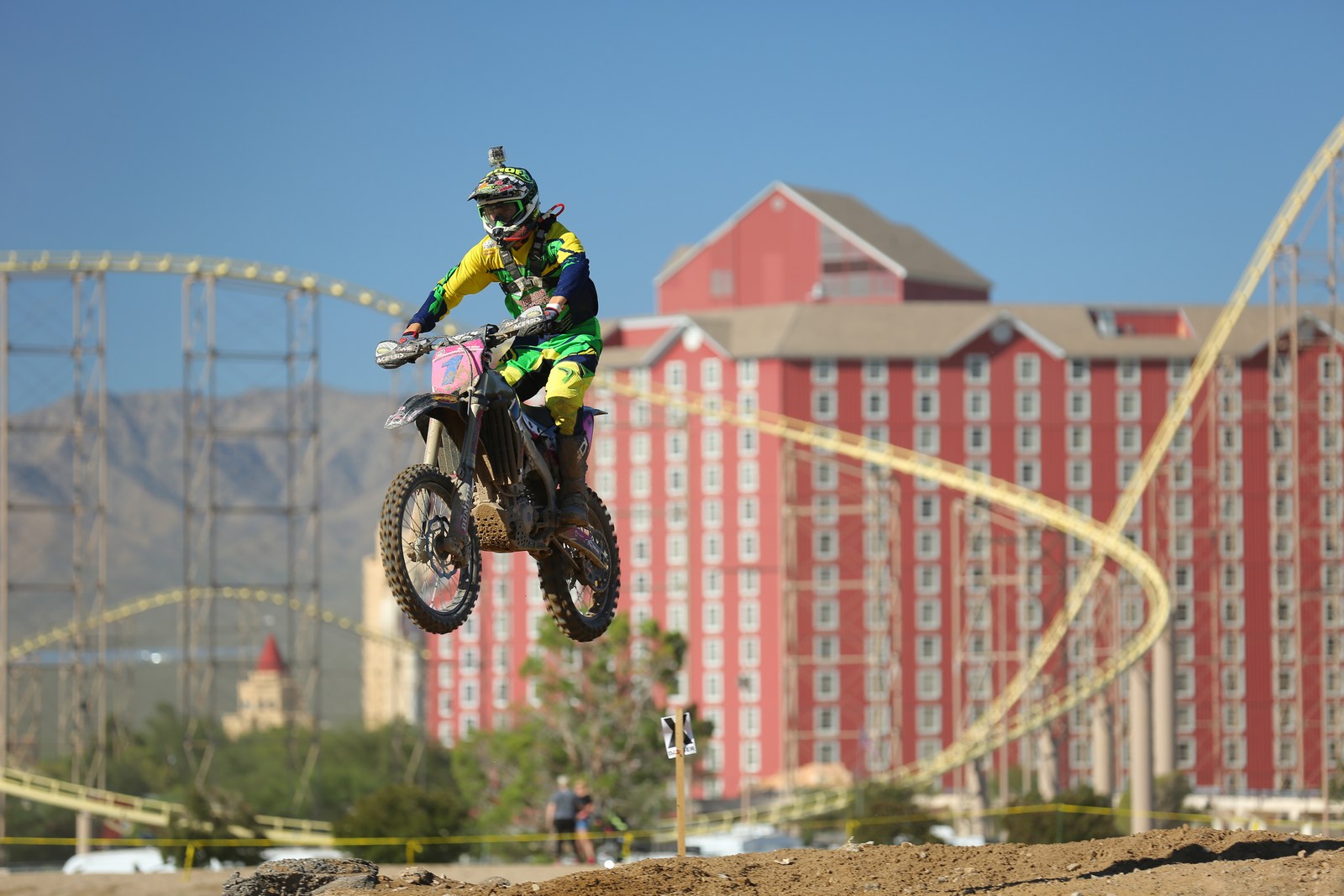 My ultimate goal was to end the season on a high; Gary had a comfortable lead in points, so I didn’t have a realistic shot at the championship, which meant that as the final round of the WORCS series headed to Primm, NV, there was one thing left for me to do: win. The racecourse at Primm really couldn’t have been too much better as the recent thunderstorms in the area had softened the sand, allowing for the track to get good and rough, and the layout the WORCS crew utilized had a really good flow through the surrounding desert.

To make a true finale out of the pro main event, WORCS scheduled the motorcycle pros and pro2’s to run on the same course at the same time as the quad pro and pro/ams. It can sometimes be a little nerve racking to race with the quads, but I have yet to have a bad experience, and it does give the pro race a more grandiose feel to it, so I personally don’t mind.

With the lack of a starting gate, the procedure would be dead engine once again, and for the umpteenth time this season my teammate, Justin Seeds, pulled the hole shot; I think he’s betted a thousand this year with the dead engines. Meanwhile, back on the line, I was left by nearly everyone, kicking my bike, and kicking, and kicking. Four or five kicks later it finally roared to life and I funneled in towards the rear of the group, somewhere in the mid teens. I do remember seeing a flapping pink superman cape just ahead of me, which meant that Eric Yorba had suffered a poor start as well. 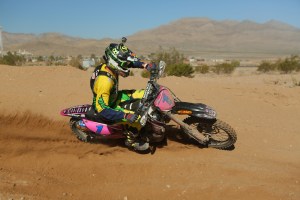 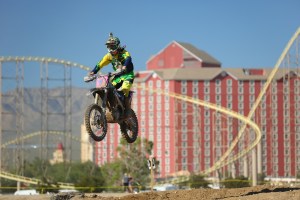 In the early chaos I was able to make my way by a few riders and by the middle of the first lap I had worked up to sixth place behind Steven Gibson. Gibson showed really good speed early and we had a good little back and forth battle for a few corners before I was finally able to make the pass stick. Not long after that I had found the rear tire of Travis Coy, and down a fast straightaway with three ski jumps I held it on a little longer, out jumping him and moving into fourth place. Just a few corners later I had caught up to Ivan Ramirez and was able to witness his quite spectacular get-off.

As Ivan accelerated out of a right-handed corner and down the following straight he clipped an embedded rock, which sent his bike into a vicious swap. It was so violent that it blew his left leg over the seat, onto the right side of his motorcycle and he was body-dragging next to his bike at around fifty mph. He had no real choice but to let go of the handlebars and he and his machine went sliding down the course as I made my way by and into third position. This left the two Justin’s ahead of me: Jones in the lead and Seeds just behind.

Near the end of the second lap the course came to the pro section, a pretty technical rocky downhill, and stuck in the middle of the best line was an ATV rider, which affected Seeds’ line choice. I think Justin may have clipped a rock just wrong and lost his balance and just as I approached the section I saw him drop the bike and then scramble to pick it back up. I was able to go around the other side of the quad, and though I also got a little hung up in the rocks, I was able to complete the pass and move into second position.

Jones was riding very well out front and I really had to work hard to try to put time into his gap of around twenty-five seconds that he had built up in the first couple laps. It took a couple more laps of the circuit for me to finally get close enough to start applying a bit of pressure and I started to look for a way by. From past battles I knew Justin would put up a fight, but down a fast, wide sand wash I saw my opportunity to hold it on a little bit longer and pull up along side. We both braked very late into the following right-hand corner, but I had the inside line, was able to control the track and take the lead. 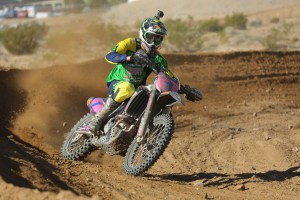 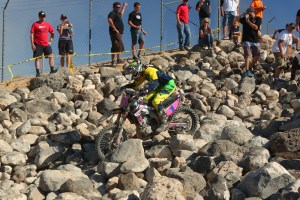 From there I tried my hardest to pull a gap on Justin as my crew had given me the signal to pit this lap and I wanted as big a gap as possible in case Justin stayed out for an extra loop. As I said, Justin was riding very well and was able to stay close enough to pass me back as I was finishing up my pit stop. I had a feeling it was going to be a bit tougher to get by Justin this time and I could see in his body language that he was attacking the track harder than the previous lap. This is where my line selection played its part as I had a little better flow through a fast, flowing “S” section of racecourse. Justin swung a little wide left to miss some chop, which narrowed his entry into the following left-handed sweeping corner. Meanwhile I stayed further right, carrying more speed into the left-hander and I was able to use that momentum to sweep around the outside of Justin and out-brake him into the next hard left, taking the lead once more.

Over the rest of the lap I stretched out a bit of a gap over Jones, which expanded further when he came in to pit, and from then on I was able to ride a smooth, comfortable pace, maintaining the gap without using too much energy or taking unnecessary risks getting around lapped riders. I was really enjoying the course, flowing through the corners and was almost a bit disappointed when the white flag came out as I didn’t feel I had had my fill yet. A lap later, the checkered flag came out and I was happy to take my second WORCS win of the year.

Gary did what he needed to do: he rode a smart race, not taking any risks, and he ended up taking fourth place in the race, which was good enough to win the championship by nine points over me. I’d like to congratulate Gary on a stellar season, he’s improved so much in the last few years and I really enjoyed the yearlong battle with him. All in all it was a good WORCS season for me. I definitely had my fare share of ups and downs, but I’m happy to end on a high and feel like I’m finding my best form once again.

I’d like to thank all of my supporters: Precision Concepts, Kawasaki, Alamo Alarm, MSR, Shoei, Sidi, Spy Optics, Focus Apparel, EVS, USWE, Ryan Abbatoye Designs, FMF, BRP, A’ME Grips, Northland Motorsports, ATP Mechanix, and THR Motorsports. I’d like to congratulate Justin Jones for making it back into the top three, and Eric Yorba for earning his first WORCS podium finish. I also want to congratulate everyone at WORCS on a fantastic season, I really enjoy the series and I’m already looking forward to round one in January! 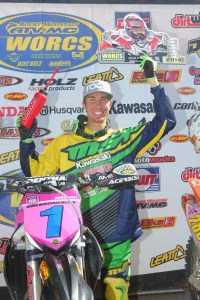 MONSTER ENERGY CUP HIGHLIGHTS EVERYTHING YOU NEED TO KNOW