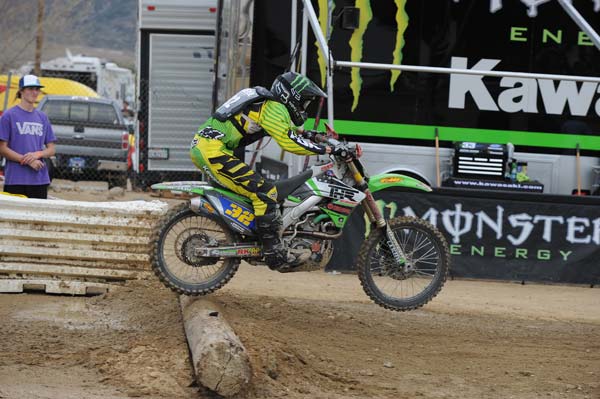 I love Glen Helen, I ride there frequently and definitely view it as a home track, but then again most of the riders lining up this weekend would feel the same.  The WORCS crew tried to do something a little different with the racecourse for the pros, intending to run us through some of the fire roads and single track Glen Helen has to offer.  We ran the off road section in unclassified and the consensus between the pros was that the billowing dust was going to make it extremely difficult to pass and border on dangerous to race.  I have to say the WORCS officials did a stellar job of talking to the riders, getting their opinions and criticism, and deciding to drop that part of the track and we would run the same course as the amateurs.

Unclassified went well enough for me until a few corners from the finish.  There was a nice rut rounding the inside of a left hand corner and I was leaning it over and just starting to get on the gas with my foot out, skimming the top of the soil.  I didn’t see a buried rock on the inside of the turn and then BAM! My left heel plowed straight into it and I could tell right away it was going to be a sore one.  I got back to the rig and took my boot off to find the inside of my left ankle already starting to swell up.  I popped some ‘I-be-hopin’s’, wrapped it up an headed to the start line.

I was gated pretty far outside so I knew I’d have to get a good enough jump to be able to rail the Talladega turn around everyone to have a chance at coming out up front.  The thirty second board went sideways, the engines started revving up and the gate dropped unleashing us onto the course.  I got a pretty good jump and did what I had planned, rounding the outside and coming out fourth.  Mike Brown and Taylor Robert were up front with Bobby Garrison right ahead of me and a heard of hungry racers behind.  Coming down Mount Saint Helen’s I was outside and felt a rider pushing down the inside of me.  It was Kyle Summers and at the base of the hill I did my best to squeeze him off but my front end tucked slightly and then stood me up, giving him the inside.  I settled into fifth for the next lap until we came into the Endurocross section.  I was getting through pretty clean but Justin Soulé, with his EX skills, just edged by me at the exit of the section and I dropped to sixth.  I was riding slightly tentative with my sore ankle until I dabbed it in a corner and realized it the adrenaline had taken most of the pain away; it was time to pick it up and push back into those guys.

On lap two I was entering one of the sand washes and saw a rider remounting.  It was Summers; he was able to get up and going right I front of me, but Soulé was happy to capitalize and move into fourth.  Out front Robert and Brown had pulled a bit of a gap, but it stabilized as we all started to find our pace.  The next few laps it felt like an accordion effect between the six of us, trading faster times but unable to really make a challenge for position.  I was just at the tail end, could see third place just a few seconds ahead of me and got inspired to pick up the pace.  I started reeling in the guys ahead of me and had a podium in my sights when I made a dreadful mistake…  Coming down the REM hill I was braking hard to the inside rut when my front end clipped a rock and sent me straight to the ground.  It happened so fast that my bike actually did a one-eighty so it took me a few second to turn it around, fire it up and get going again.  Garrison had pitted the previous lap and was now right behind me.  He did what any good racer would do and attacked me as I was still sorting myself out.  He had a good line up one of the hills and accelerated up the inside of me, taking fifth away.  I had to come into the pit that lap, which would lose a bit more time, but the crew did a fantastic job at getting me out quickly; I truly feel we have the fastest crew on pro pit row.  With just a little over a lap to go I realized I wasn’t going to catch the guys ahead of me and started looking ahead to the next day, scouting lines and saving a little energy.  The checkered flag waved and I finished a fairly satisfying sixth.

I woke up Sunday to find my ankle quite swollen and already a pretty dark shade of purple.  A few more anti-inflammatories, a mega wrap job with some medical tape and I got it into the boot and headed to the start line.  I chose the same gate as moto one with the same goal of sweeping the outside of everyone, however this time I didn’t get quite the jump off the line I needed and as I came out of the first turn and up the first hill I was somewhere around twelfth or thirteenth.  I pushed hard the first lap and was able to get by a few riders to break into the top ten; Bobby Garrison actually got a worse start than me, but was quick to make a move on me and I did my best to latch on to him through the pack.  A couple laps in and I was ninth place with Bobby right ahead of me, Ryan Abbatoye in seventh, Ross Neely in sixth, Brenden Ritzman in fifth and I could still just see Justin Soulé about fifteen seconds ahead; the three leaders, Kyle Summers, Taylor Robert and Mike Brown, had created a bit of a gap over the rest of us.  Bobby wicked his pace up and made it by Abbatoye and Neely in the span of just few corners and I knew I had to work fast to hang with him.  I closed in on Ryan and we started a heated three-lap battle that took us past Neely and Brenden (who suffered an injury to his thumb) and closed us back up to Garrison slightly.  I was pinning it trying to make the move and Ryan was going beyond his comfort zone to keep me behind.  I tried everything short of taking him out, which after the race I already told him I’m going to take him out next time (with a smile, of course), but I just couldn’t quite make the move.  Luckily at this point in the race we were starting to come in for pit stops.

Ryan pitted a lap before me and I knew I’d need to burn a hot one to pit and make it out ahead of him.  The strategy worked perfectly, my crew got me in and out of the pit so fast, and I actually came out with a bit of a gap.  It was time to work forward into Garrison and Soulé, who were just ten or so seconds up the course.  I was hanging with their pace, but not quite closing the gap, so I started to dig a little deeper but in doing so I blew the front end over a berm and slid out.  It was a quick crash, but it took a bit of wind out of my sails as I started to think about the pain in my ankle and from that moment I never could quite get my head back into the zone.  I rode the next few laps a little off the pace, but with a healthy gap back to Abbatoye in seventh.  The white flag came out and felt I could just maintain my pace to the finish and collect another sixth; little did I know Mathew Phillips, an off-roader over from Australia, was coming like a freight train.  I caught a glimpse of him in the motocross section and my initial thought was, “shoot I really don’t want to have to push it again”, but the racer in me took over and I picked my pace up.  It’s always tough when you’re mind’s wandering to suddenly drop your lap times when someone’s catching you from behind and I couldn’t match his pace; he reeled me in to about five seconds and I was ready for a pretty gnarly last lap trying to hold him behind me.  I pushed myself hard to the finish and never felt a challenge come from Phillips, as apparently he suffered a bit of a mechanical and had to drop out on the last lap.  It was a bit of a reprieve for me, but I’ll take it.  At the checkered flag I took home another hard fought sixth.

In reflection I was pretty happy with my weekend, I learned a few things I can polish out and improve on for the next round, but I was stoked to show that I have the speed of the leaders and I’m looking forward to a couple weeks off to heal my ankle up.  My bike worked really well on an extremely rough and choppy course and the pit crew did a stellar job all weekend.  Thank you to my team: THR Motorsports, Monster Energy, Precision Concepts Kawasaki and my personal sponsors: Fox Racing and Asterisk.  I want to give a shout out to the WORCS crew for putting on a great event.  I know they had a few issues, but they’ve been making strides to improve the courses, taking in more feedback from the racers, and it’s great to see them putting in such an effort.  I’ve been forming a habit of winning through the close of last season and first race of the New Year that I wasn’t able to continue at this race; I’ve started to really enjoy that feeling and I’m going to work my butt off to get it back.  Thank you to all the fans for cheering us on and enjoying this sport we all love so much, I’ll see you at the next one!

Maxima on the box at the Phoenix SX