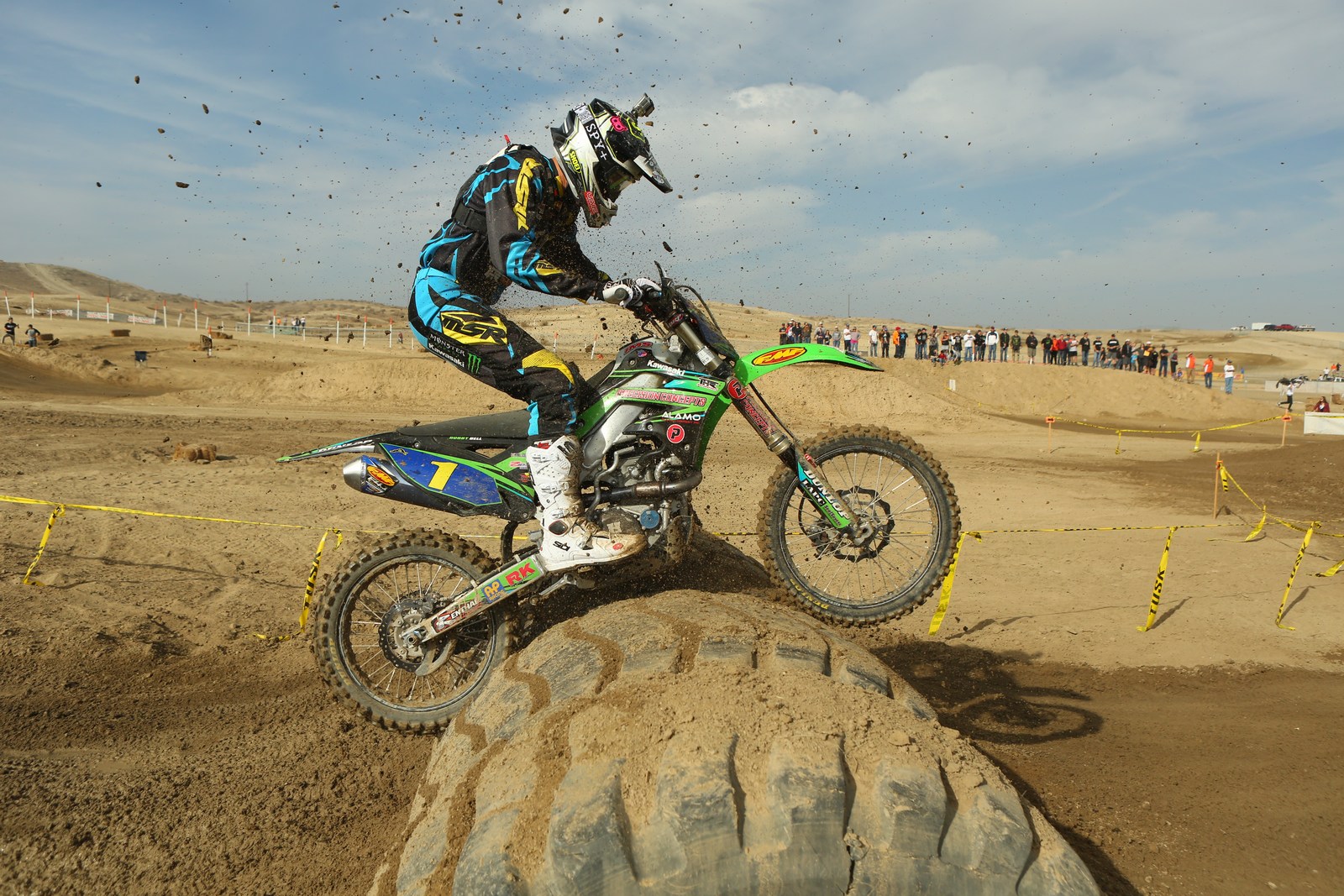 Taft always has been, and probably always will be, a challenging place to hold a race. The terrain is a combination of hard-pack dirt, which just for giggles offers about as much traction as ice when the slightest bit of water touches it, and powdery white silt, which sneakily conceals one- and two-foot square edges from the riders who are unlucky enough to slam into them. Personally, I rather enjoy racing there. I feel it?.?ª™s a test of a rider?.?ª™s limits, which can be fun, but if things aren?.?ª™t clicking smoothly, it can definitely be quite frustrating and sometimes slightly scary.

After Saturday?.?ª™s practice I was left feeling very positive. I knew Sunday would be tough with the level of talent in the pro class, but the bike felt great, my body felt sensational and I was focused on making a statement to the field that I was the rider to beat.

The first race after any lengthy break in the schedule is an interesting one, especially the first race of a new season. It?.?ª™s unique because there?.?ª™s no status quo set yet; everybody has there own personal expectations, feels they?.?ª™ve done the work during the break and has a clean slate without any preconceived notion of where they fit in. The bottom line is that everybody comes out swinging for the fences and the race this weekend was no exception.

I lined up far outside of the gate start, as I liked the run up to the first corner as well as the angle the outside line provided me. Though my previous experiences with Taft?.?ª™s cement starting gate have never faired too well, I decided this was as good a time as any to turn that luck around.

With the thirty-second board turning sideways, the rpms of the bikes on the starting line began to build and everyone?.?ª™s off-season labor was about to be put on display for all to see. The gate dropped and as I began to disengage the clutch, I could tell I was off to a good jump. The field was wide open, clicking through the gears up the long start straight and a quick glance to my right showed me that I was battling Eric Yorba (who?.?ª™s new to the pro class this year) for the holeshot. Unfortunately for me, Eric can?.?ª™t weigh much more than a hundred forty pounds and he was able to just edge ahead of me as we entered the first corner.

I was stoked with my start, but my excitement was quickly quelled as Justin Jones held the throttle on hard around the inside of the first turn and actually made the pass by me into second position. Justin Seeds pushed really hard around the outside of me as well, but I was able to get back by him a corner later and I settled into third behind the two leaders as we all tried to manage the freshly watered racecourse.

I may have been a bit too tentative on the first couple of laps and to my chagrin Gary Sutherlin quickly made his way by me. In fact, I was actually beginning to struggle to find any kind of rhythm with the course and I began tightening up and even experiencing a bit of the dreaded arm pump. In hindsight I hadn?.?ª™t really been able to ride at the level I?.?ª™d needed to since before the Baja 1000 and the pace of everybody was a little much for me. After a couple laps of pressure, Bobby Bonds was able to make his way by me as well and with Justin Seeds all over the back of me, applying the pressure, my frustrations with the way I was riding began to build.

After another lap or so I finally began to find some semblance of the speed I wanted to have and was able to make my way by Eric Yorba for fourth position on the track. I also got a bit of a gift when Justin had some bike troubles and had to pull of, meaning I had a clear run to the top three and no pressure from behind.

I was really focusing on my breathing in hopes of loosening up on the bike and easing my arm pump, and just around the halfway point of the race it started to make a difference. Unfortunately for me I had fallen over thirty seconds behind Bonds (who had pushed all the way into the lead), but I began to put some time into Gary?.?ª™s gap over me and as we both came in to pit, I was right behind him.

My crew did a great job getting me in and out of the pits and even with a goggle change I was able to come out ahead of Gary, which meant I had moved into third place. I was definitely starting to feel better on the bike and could see that I was making ground on both Jones and Bonds ahead of me. After a couple of laps I had closed the gap on Justin and began to apply the pressure. To his credit, Justin picked up his pace and was fighting hard to maintain his second: I came up the outside of him into a left-handed corner and then squared underneath him in an attempt to out power him up the following hill, but he grabbed a handful of throttle and pushed me wide, even making a bit of contact with me in his effort. It was a fun battle, but I knew I needed to make a move quickly and as we headed up the following canyon, I had a slightly better line and was able to motor up along side Justin, control the inside of the next right-hander and take second place for my own.

Over the next couple laps I was feeling even stronger and could see I was putting a dent into Bobby?.?ª™s lead he had over me. With just three laps of the circuit to go I had the gap down around ten seconds and the win in my sights, but as I broke into the coming corner, my rear brake pedal suddenly lost all feel and wouldn?.?ª™t engage the brakes in the slightest. I had hoped this was a slight overheating problem that would fix itself if I lay off the rear brake, but in the end it was actually quite a catastrophic problem that wouldn?.?ª™t be remedied.

Gary, who had latched right on to my rear wheel after I?.?ª™d passed him in the pits, was quick to close the gap as I struggled to adapt to the sudden lack of rear brake entering corners. It didn?.?ª™t take long for me to drift wide in a turn and allow Gary a pretty easy pass by on the inside. Gary did have a slight hiccup as he lost his front end in the silt, but he remounted quickly and was soon in firm command of second place. Unfortunately for me, Justin Jones was still right in my wake as well and was able to make his way by me in a similar fashion to Gary: I blew wide in a corner and he motored up the inside of me.

From this point I pushed as much as I could to try to stay in contact with the leaders, but I just couldn?.?ª™t push through the corners the way I wanted to and was quickly losing touch. It looked like I was destined for a fourth place finish, but on the last lap Bobby Bonds suffered a pretty catastrophic problem of his own when his rear tire started shredding to pieces. This was a lucky break for me as Bonds had to slow his pace to a crawl and I was able to make my way by and come into the checkers in third place.

I could state the obvious about how this wasn?.?ª™t the way I wanted to start the series, but when I look at the positives, I?.?ª™m actually quite pleased with the way I handled the race. After falling back early I was able to find my pace and work my way up to the front, showing myself that I have the speed I need; plus my fitness feels fantastic which is always a bonus. If I simply fix the two issues I had: riding a bit tentative in the early stages and dropping my brake pedal to prevent me from dragging my rear brake, I feel I?.?ª™ll be up front where I want to be. As it is, I?.?ª™m happy to be able to represent all of my supporters on the podium and I?.?ª™d like to thank all of my personal sponsors who are making this year possible: Kawasaki, Precision Concepts, Alamo Alarm, THR Motorsports, MSR mx, Shoei helmets, Sidi boots, Spy goggles, FOCUS apparel, EVS sports, USWE hydration systems, FMF racing, Northland Motorsports, Ryan Abbatoye Designs, ATP Mechanix and Jan?.?ª™s Towing.

I?.?ª™m happy to have a free weekend coming up and then it?.?ª™s off to Glen Helen for the Mammoth Motocross qualifier. I love the Mammoth MX and make a point to hit it every year so when I saw there?.?ª™s going to be a qualifier at one of my favorite places to ride, it suddenly became a must-attend on the schedule. Hope everyone reading had a great weekend; stay classy.