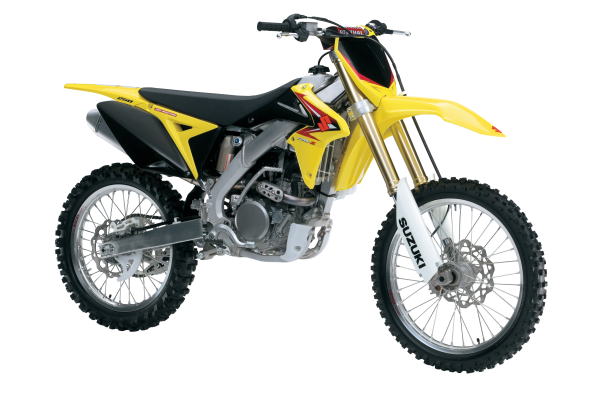 Share FacebookTwitterGoogle+ReddItWhatsAppPinterestEmail
Championship winning performance ready for you today. Suzuki races to win, period. And, thanks to the hard work of Ryan Dungey in the U.S., the RM-Z250 is the AMA Supercross Lites West Coast Champion for 2009. But winning goes beyond the champagne. For the 2010 RM-Z250, Suzuki applied lessons learned on the track to turn up the speed, handling and confidence you’ll get racing every day, anywhere in the world.

Suzuki racing technology is everywhere you look: advanced Suzuki fuel injection is fitted for the first time on a four-stroke 250cm3 Suzuki motocross machine. Further engine modifications boost peak power without giving up any of the low-end or midrange that has made the RM-Z250 the choice of top riders everywhere. Chassis updates improve handling with key suspension upgrades making the new RM-Z250 the perfect weapon for motocross racers worldwide. And there’s the eye-catching slim, aggressive styling that causes the RM-Z250 stand out at any track.
Think of the 2010 RM-Z250 as the perfect racing package.
Championship winning performance, now improved beyond the reach of the competition.
Fuel Injection

Derived from the pacesetting RM-Z450’s superlative system, the RM-Z250’s battery-less injection features a 43mm throttle body with progressive throttle linkage, a 16-bit computer and unique capacitor-assisted starting system. A durable, lightweight magneto-generator powers the fuel injection after starting. Because all engine systems are related in performance, a new muffler is fitted to optimize the benefits of fuel injection.

In the search for handling perfection, the RM-Z250’s twin-spar aluminum alloy frame has been redesigned with several key components to optimize rigidity balance and improve traction at high speed. The lower frame tube has thicker walls, 3.0mm versus 2.5mm, while the side rails are slightly shallower. Connecting the 19-inch rear wheel and the lightweight chassis is a new swingarm with an improved center brace for increased rigidity that also more concentrates its mass for enhanced suspension action and greater traction. To prove that Suzuki understands the importance of details, new footrest brackets are designed to prevent mud clogging.

Power at the Top
Engine modifications for the RM-Z250 maintain its impressive low-to-midrange power but add a thrilling high-rpm rush to the mix—precisely what expert-level riders want in a potent 4-stroke racing engine. Revised cam timing works in conjunction with updated intake ports to boost power and torque at the top of the power band. A new, stronger connecting rod and mirror finishing permits maximum engine speed increased to a stunning 13,500 rpm. Crankshaft modifications similar in spec to the championship-winning RM-Z450 increase rigidity and strength. The 249cm3 engine continues to use a DOHC, 4-valve head design with lightweight titanium valves riding in an advanced pent-roof cylinder head and semi-dry-sump lubrication system reduces internal friction. With a top-end rush like no other, the RM-Z250’s engine has to be experienced to be believed.
Radiator Louvers
Improved radiator louvers direct more cooling air to the twin side-mounted aluminum alloy radiators for lower engine temperatures. They are joined to the outer bodywork for increased strength without adding weight.

Color Coded
For 2010, the RM-Z250’s number plates have a black background to conform to rules for competition numbers. It’s one less thing to worry about so racers can concentrate on winning.