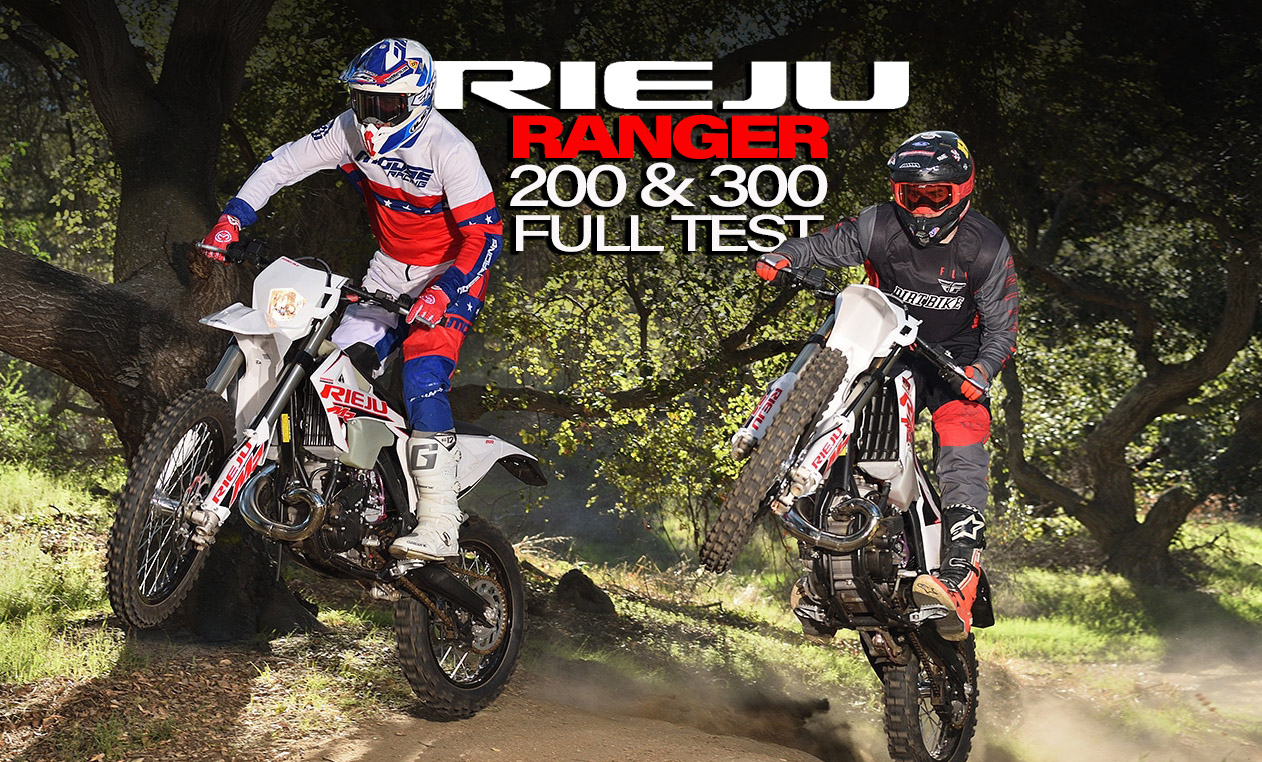 If we can presume to speak for the two-stroke underground, most manufacturers are missing the point. No one is really crying out for new technology, more complication and more expense. What most twostroke fans want is simplicity, efficiency and affordability. What they want is more bikes like the Rieju MR Ranger. Rieju is a small company in Figueres, Spain, that has been making small-displacement street bikes for the European market for over 70 years. When KTM took control of the GasGas factory in nearby Girona, Rieju struck an agreement to acquire all the tooling and inventory for the previously existing GasGas line of two-strokes. Those bikes had been extensively redesigned in 2018 with capital from Torrot, a company specializing in electric mobility products. Sadly, emphasis quickly shifted away from the two-stroke line, and the redesigned motorcycles were very hard to find.

That should change. Rieju has big plans for increasing production and is currently building a new factory. For now, the products formerly known as GasGas are still produced in Girona. Presumably, there’s some involvement from KTM management there, as they have controlling interest in that facility. Soon, the production will be moved to the new factory under Rieju ownership.

THE RANGER FORMULA
Rieju calls these motorcycles its Hard Enduro line, which has three levels. The MR Pro bikes are the top of the food chain. The Racing models are the standard editions, and the Rangers are more price-targeted. We have both the MR Ranger 200 and the MR Ranger 300, which sell for $8599 and $8799, respectively. Despite their comparatively low prices, they aren’t really “budget” bikes. The fit and finish are excellent, and the parts are top quality. The fork and shock are KYB. The hydraulic clutch is Magura. The carburetor is a Keihin, and the reed is a Moto Tassinari. They have electric starters and kickstarters. The brakes might be among the few real concessions to price; they are a mix of different Spanish components, including Braktec, J. Juan and AJP. Also, the bars and rims are not name-brand items.

The Rangers aren’t designed to be race bikes. They are aimed more at trail riding and even entry-level riders. To make the power delivery more friendly, the expansion chambers have long head pipes, and the carburetors are 36mm. Rieju engineers also brought down the seat height by almost 2 inches compared to its other bikes. They did this by reducing the suspension travel and using a thinner seat. You can bring the seat height down even lower by adjusting the linkage, which has a concentric lobe embedded in the dog bone. Most of the engineering is familiar to anyone who followed GasGas motorcycles prior to 2018. There are only a few differences. One is that the electric starter is now in an oil bath, which should result in increased reliability.

WHERE A RANGER RANGES
If you know the traditional traits of a modern two-stroke off-road bike, then you already know a little about the Ranger. Just multiply everything times two. Whereas a typical 300 two-stroke is torquey, the MR Ranger 300 is very, very torquey. Whereas a typical two-stroke is difficult to stall, an MR Ranger is almost impossible to stall. On the flip side, whereas most two-strokes go a little flat on top, a Ranger is completely dead on top. Both the 300 and 200 Ranger motors are tuned like trials bikes. They both are more agile than four-strokes and feel much lighter than the scale reads.

What’s really interesting is that the 200 feels much lighter than the 300. We’ve seen this before; it turns out that the sensation of weight is produced as much by motor characteristics as by actual poundage. And, the power produced by the 200 isn’t that much less, at least down low. In fact, contrary to what you might think, the 200 works even better at low revs than the 300. It’s smoother and pulls almost as well. The 300 has more power in the middle and is more capable in sand and on hills. Carburetion is perfectly clean on both bikes. In really confined areas, the Rangers give away nothing to more conventional two-strokes like KTMs and Betas. As you might expect, the power is too flat on top for more wide-open spaces. There, you might also notice that both engines vibrate a little more than two-stroke motors that have counterbalancers.

Likewise, the suspension is super soft on both bikes, and clearly made for low speeds and tight terrain. The shock springs are so light that the bikes will barely stand upright on their side stands. This makes the seat height even less intimidating than the specs indicate. The fork is an open-cartridge KYB, which is older technology but perfectly suitable for this type of application. At slower speeds, you don’t feel rocks, roots or hard edges. Whoops are another matter. The bikes can be bottomed at will. That’s appropriate for the intended mission of the Ranger line. These aren’t bikes for racing, play racing or anything that incorporates full throttle and hard acceleration. They are bikes for conquering challenges. For beginners, those challenges might be gentle two-trackers through the woods. For experienced riders, they might be massive logs or vertical rock faces.

The Rieju MR Rangers exist in a very narrow corridor between beginners and experts. Very few bikes can walk that line. For now, Rieju isn’t yet a household name, but the two-stroke underground has a growing voice, and this is exactly what it’s calling for. 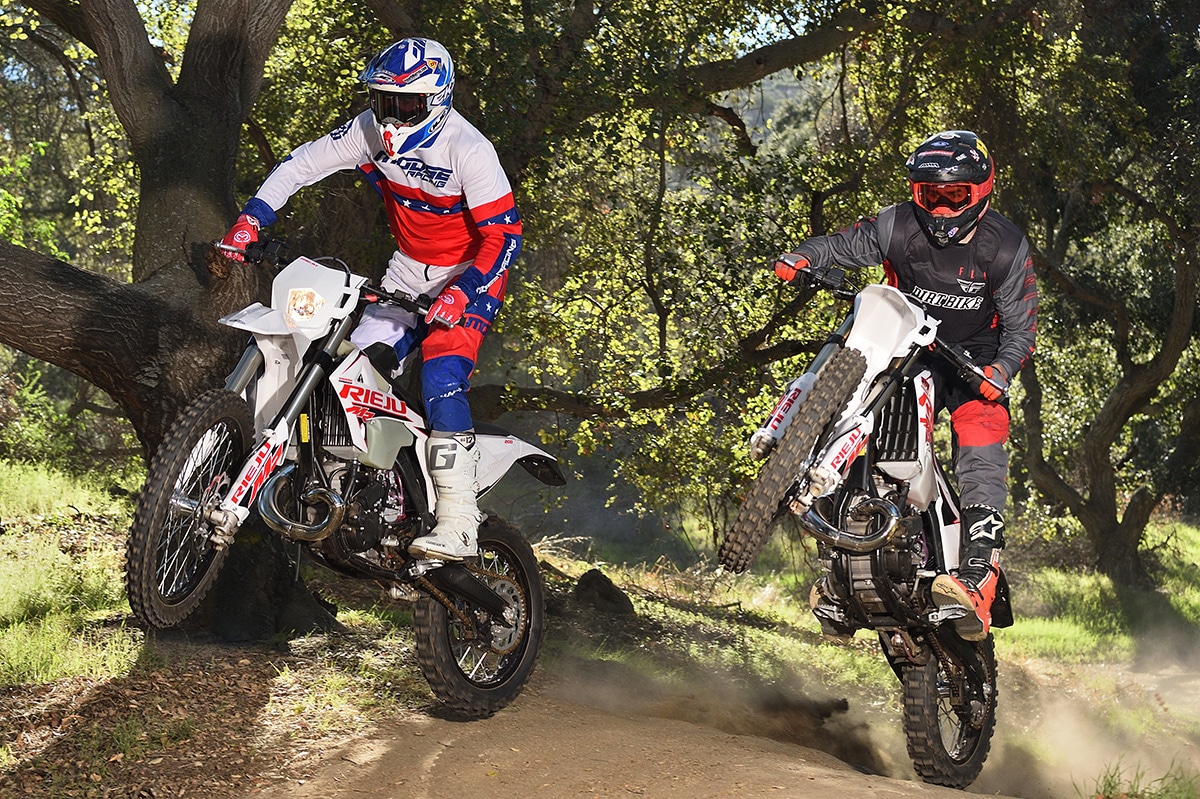