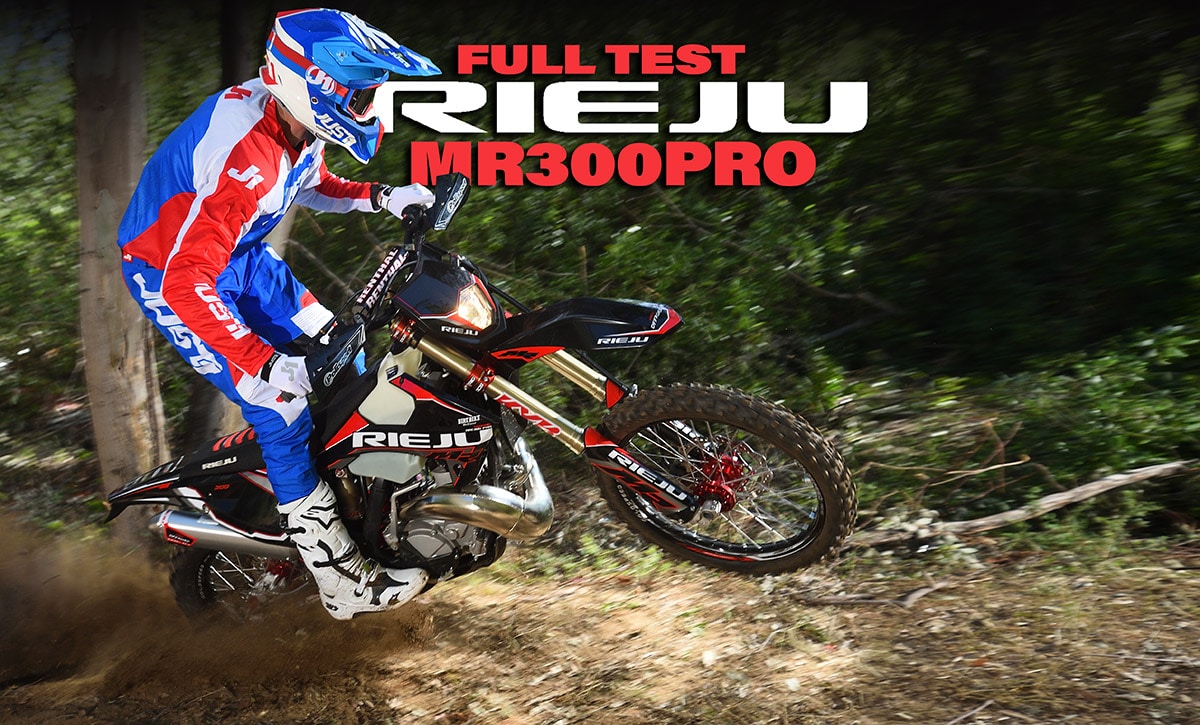 It’s okay if you have no idea how to pronounce “Rieju.” We don’t either. It’s okay if you’ve never seen one of them or heard of the company before last year. We hadn’t either. Perhaps we had vague awareness of the name from European trade shows, but Rieju has never imported bikes to the U.S. and, frankly, has never had a product that would play well here. They were mostly small-bore two-stroke street bikes that wouldn’t pass the EPA sniff test.

All that changed when the parent company of KTM purchased controlling interest in GasGas. The existing GasGas off-road line was then abandoned. What happened to all that tooling and intellectual property? Rieju acquired it. For now, the bikes formerly known as GasGas are still being manufactured in Girona, Spain, alongside products that KTM is selling—most notably GasGas trials bikes. Rieju doesn’t yet have the capacity to take on that task but is building a new factory. So, for now, Rieju’s new bikes are not yet made by Rieju. Gearing up to build reasonably sophisticated competition bikes is no quick process.

The flagship of Rieju’s new off-road competition line is the MR300 Pro. This is based on the 2019 GasGas EC300. That bike had been redesigned a year earlier, but it barely reached the market before supply issues surfaced. In truth, U.S. riders never really had a chance to see what it could do.

Rieju’s current motor still resembles the original GasGas 300 from back in 1998. It was state of the art at the time, with a counterbalancer, hydraulic clutch, case reed and mechanical power valve. It has evolved since then, but there’s never been a blank-slate redesign. Today’s motor has an external electric start, and the counterbalancer is no more.

The chassis, on the other hand, has gone through some very big changes, with the biggest of all coming in 2018. A certain amount of KTM influence is visible in this rendition. The bike has a steel central backbone, whereas the versions going all the way back to the late ’90s had perimeter frames. The EC300 also got KYB suspension in that 2018 remake, and now suspension has been further updated. The MR Pro, being the top of the line, has a long list of premium items, starting with a cartridge fork that has a DLC coating on the lower tubes. The bike also has an Xtrig ROCS triple clamp, a cooling fan, a skid plate, Polisport engine protectors, Goldspeed wheels, Renthal Twinwall bars and a gripper seat. The tires are Michelin full knobbies. The MR Pro sells for $10,499, which is $1000 more than the standard version. For comparison, a standard Husky TE300i is $12,299.

Riding the Rieju gives you a sense of dirt bike déjà vu. You get the distinct feeling that you already know the bike very well. When you swing a leg over anything that looks this different with a name that’s this unpronounceable, you expect to have a completely alien experience. That’s not what happens. You become so comfortable so quickly that you’re startled at the first stop when everyone points and asks questions. The weirdest thing about riding in the Rieju is that there’s nothing weird, at least if you’re a 300 two-stroke kind of guy.

If you aren’t a 300 two-stroke guy, you’ll be astounded by how well the Rieju runs at low rpm. That’s a signature trait of most modern off-road two-strokes. Back when this motor debuted as a GasGas, it was groundbreaking in that regard and forced KTM to change its approach. The Rieju allows you to slow down to idle speed, then just open the throttle and climb whatever you’re pointed towards. No coughing, no stalling, no hiccups. The motor is freakishly clean-running and well-behaved. Back in the old days, any two-stroke that ran this well was on the brink of blowing up. In recent years, that hasn’t been the case, and the MR Pro now runs as well at low rpm as any 300 two-stroke on the market.

The bike’s midrange power is excellent, and peak power is decent, although probably not class-leading. At the very top end of the powerband, the Rieju signs off a little early. Along the way, it also vibrates a little, but no more than you might expect from a motor with no counterbalancer.

Overall, handling is, once again, very familiar-feeling to anyone with a 300 two-stroke background. The geometry is almost a Husky by the numbers, although the Spanish bike has more of a long, stable feel when you ride it. It turns well, too, but isn’t quite as nimble as any of the Austrian bikes. Overall weight plays a role here. The standard version of the MR300 Pro is already a little overweight at 245 pounds without fuel. The MR Pro is a couple of pounds more because of the electric fan. A Husky equipped in a similar fashion is 10 pounds lighter. A KTM XC-W without linkage is lighter still.

If you’re one of the PDS faithful who hates the idea of linkage rear suspension, you might be surprised by the Rieju’s ground clearance. The linkage and the bottom of the shock are well tucked in, plus the profile down there is more conducive to gliding over logs rather than hanging up and teetering à la Husky. Overall suspension performance is excellent for a moderate trail pace. The MR Pro is firmer than the standard version, but still moves freely in small chop. We’re particularly delighted with the fork. It has a broader range of effectiveness than the WP Xplor fork that comes on the KTM 300XC-W and the Husqvarna TE300i. It isn’t until you get in truly deep whoops or venture out on a motocross track that it starts to reach its limits. 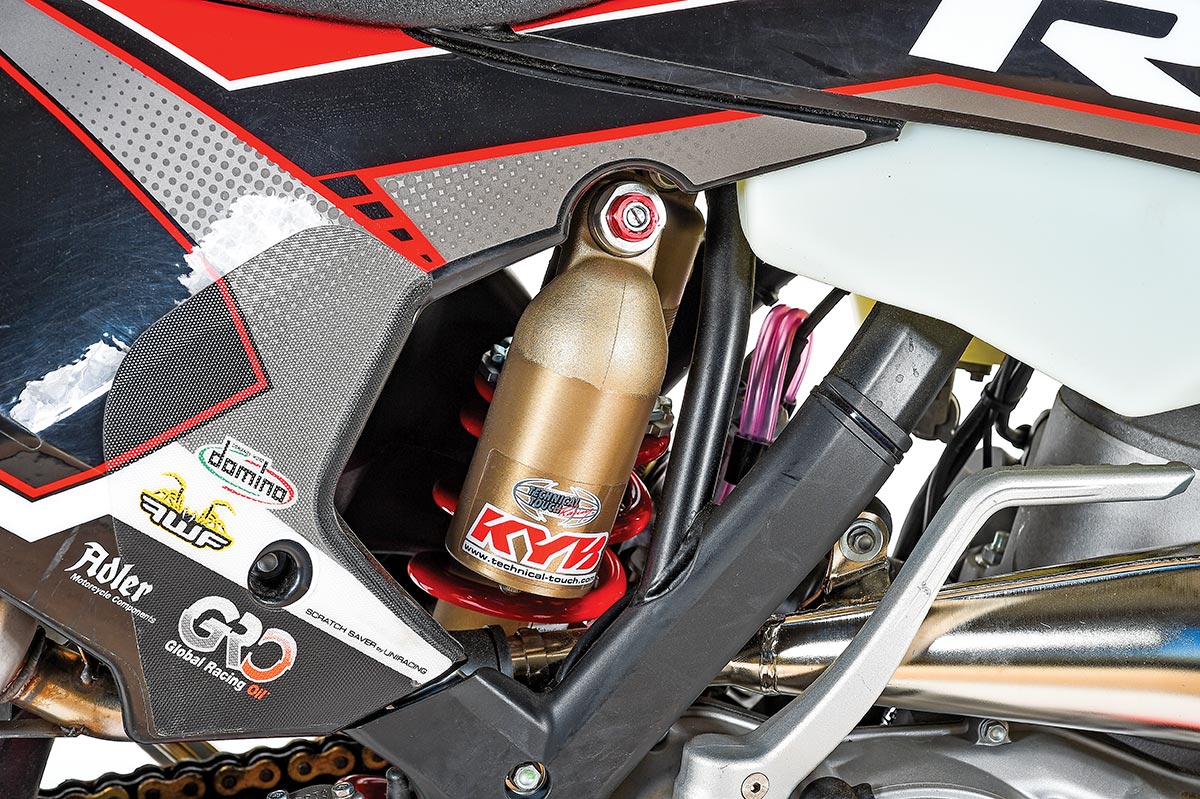 All the parts that come on the Rieju are top-notch. We love the Twinwall Renthal handlebar, the grips and the seat. The Nissin brakes are as good as anything on the market, and items like the chain, sprockets and rims are outstanding. We did have some intermittent problems with the electric starter, but this wasn’t a ride killer the way it would be on other machines, because the Rieju has a kickstarter and it fires up easily.

Inevitably, the Rieju will be compared to 300 two-strokes, like the Beta, KTM, Husky, Sherco, TM and the current GasGas 300. It’s become a crowded market, and each of those bikes has a fanatical fan base. We’re betting that the Rieju will soon have its own band of followers. They will just be fanatics who have a little more money in their pockets.