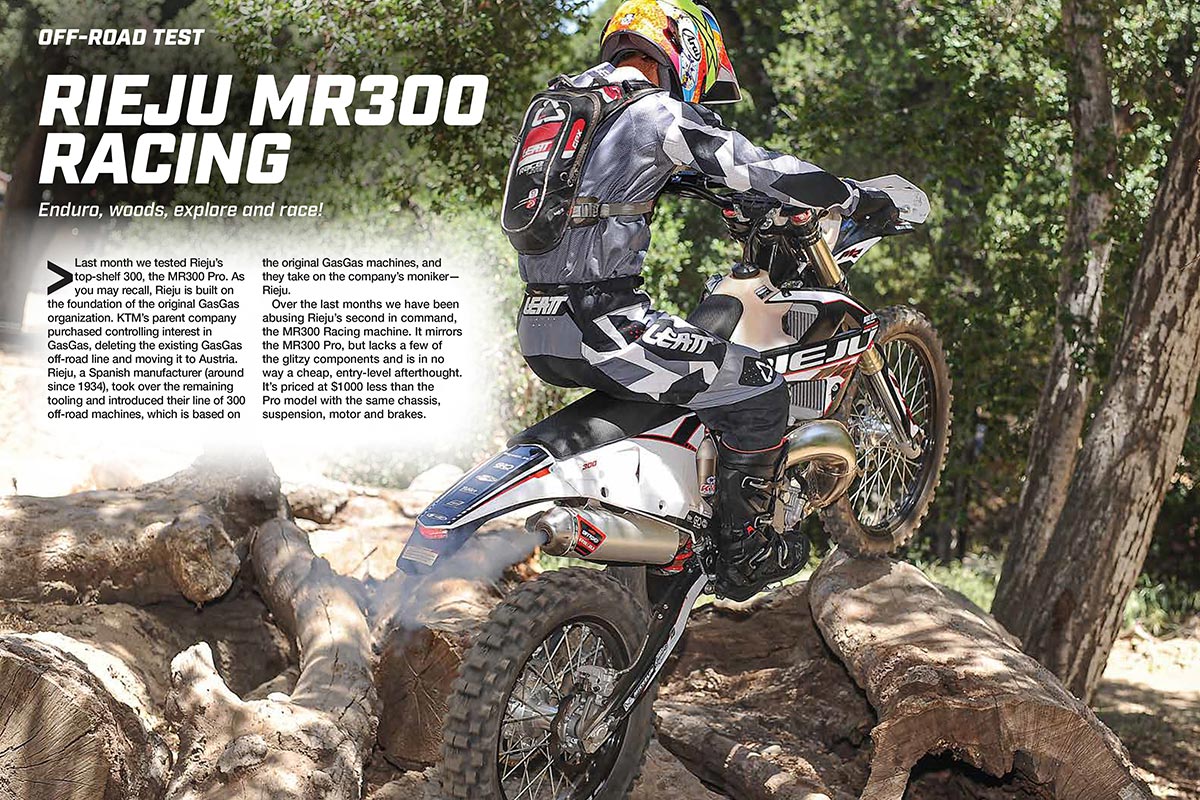 Rieju is built on the foundation of the original GasGas organization. KTM’s parent company purchased controlling interest in GasGas, deleting the existing GasGas off-road line and moving it to Austria. Rieju, a Spanish manufacturer (around since 1934), took over the remaining tooling and introduced their line of 300 off-road machines, which is based on the original GasGas machines, and they take on the company’s moniker—Rieju. Over the last months we have been abusing the MR300 Racing machine.  It’s priced at $9699, which is $1500 less than the Husqvarna TE300.

INSIDE THE MR300 RACING
Rieju has equipped the MR300 Racing with top-notch components that make a two-stroke enduro machine appealing to a hard-core enduro fan base. The bike is fueled via a proven 38mm Keihin PWK carburetor and flows into a case reed with a Moto Tassinari VForce4 cage. A high/low ignition map switch lets you choose a Sunshine or Rain power mode. It’s water-cooled, does not come equipped with a radiator fan, and has a 6-speed gearbox, which is controlled through a Magura hydraulic clutch. It’s both kick and electric start, with the starter being an external unit. Nissin brakes with NG rotors are fit front and rear, while Excel rims and Michelin tires handle the wheels.

On the suspension side the fork is KYB with an AOS (Air Oil Separate) closed-cartridge system. The rear damper is KYB and runs through a linkage system. The frame is chromoly steel with an aluminum subframe. A nickel-plated exhaust system exits through a Tecnigas aluminum and repackable silencer, which is not spark-arrested.

Neken handlebars, glue-on Neken grips, Polisport brush guards and an adjustable top triple clamp   top off the cockpit. The fuel tank is slim and totes 2.6 gallons, and there’s a resettable odometer and handlebar-mounted switches to control the minimalist enduro lighting.

ON THE TRAIL
The popularity of two-stroke off-road bikes has grown rapidly over the past few years. They produce smooth,  predictable power while offering a less complex maintenance schedule than a valved machine. When the going gets tough and technical, they rarely stall and do not suffer from the four-stroke cough-and-die syndrome. When it comes to the Rieju, it is much more at home in the slow-speed, cobby terrain. The MR300 Racing is a low-rpm-grunting marvel. You can lug the bike down to zero and keep plugging along up the nasty conditions with very little clutch finesse and without fear of stalling. Equally impressive is the midrange power. We were able to really keep the bike in the meat of the powerband in the faster situations and not have to rev it mercilessly. At the higher revs, the Rieju will pull and climb some ugly hills, but it signs off a bit earlier than we’d like. Its heart and soul are designed around technical riding, which is not a bad trait.

You can feel the weight of the machine, especially if you’re familiar with the Austrian 300s. It’s not a deal-breaker, but is noticeable on twisty trails when changing directions quickly, or when doing pivot turns up tight switchbacks. There is just a bit more extra heft going on, and you feel it trying to manhandle the bike around. In the faster situations this wasn’t an issue, as the bike is extremely planted for a two-stroke. The six-speed wide-ratio gearbox was well-spaced with a low first and high sixth, providing proper cogs for tight trails and rocky climbs, but with an overdrive feel to the sixth gear, which made it nice for transfer sections.

In the suspension department we were pleased with the KYB components, but we made a few changes overall. Initially, the shock felt a bit stiffer than the fork, making it ride high out back. We went four clicks softer on the shock compression and sped up the rebound. With the fork, our only change was to move them flush to the upper triple clamp. This stabilized the bike and reduced the head-shake that we felt in high-speed chop. We never bottomed either end, and the fork was subtle and smooth during initial travel and did a fine job of gargling on a harsh off-road diet. With the shock it felt planted, a bit harsher than the fork and the rear end wandered a bit under acceleration in hacky conditions.

One final note about the fit and feel: the footpegs are mounted high on the chassis while the Neken bars are a low bend. So, the rider cockpit is cramped and takes some getting used to. Taller riders will require more saddle thickness, which needs help anyway because it is very stiff with an abrasive cover and is brutal on your bottom after a long day of riding.

BITS AND PIECES
There is no doubt that the Rieju MR300 Racing feels heavier than the competition, because it is. It loads the scales at a beefy 242 pounds, which is a good 12 pounds heavier than the KTM 300XC-W. This makes it a bit more ponderous, not quite as nimble and flickable as its Austrian competitors. Also, it’s a shaker, as the machine lacks a counterbalancer so vibration is a thing. We had a love-hate relationship with the Magura clutch. While the pull was very light and offered good engagement, once it got hot and abused the action, it morphed into an inconsistent and grabby bike, making it difficult to finesse the power via the clutch. On the carburetion side, the machine ran clean once it was warmed up, and we got good mileage (a 50-miler without going on reserve).

We never had to use the backup kickstart, as the electric start performed and did its job perfectly. The exhaust note via the Tecnigas muffler was subdued, but we do wish the bike would come with a spark arrestor, as many of our riding areas require them. With the map switch we felt little difference in the Rain and Sunshine modes when riding in the bottom-to-mid-power precinct. Once you’re in the buzz zone there is more rev, so this is where we lived most of the time.

The Nissin brakes are excellent and offer better feel, and has more power than the Braktec units we have tested on other brands. Air-filter access and cleaning are a tool-free job, so top marks for that. The lower frame and engine feature a smallish plastic skid plate but should be shelved if serious hard enduro is your passion. The Neken bars are a low bend and use glue-on Neken grips, which spun free by the second ride. Polisport hand shields get a thumbs up. Keep an eye on all the fasteners, at least within the first few hours, as we had a few things rattle loose.

The turning radius reminded us of the Beta machines, being just a touch too wide. There are steering stops, but just like on the Beta, the forks will hit the radiators if you adjust them in. The Michelin enduro tires were superb and are a softer, stickier compound, making them a welcomed addition for the trails that we ride.

THE LONG, WINDING ROAD
When it comes down to it the Rieju MR300 Racing machine is a solid platform for the 2-stroke ‘technical trail’ pilot. It’s a tractor, it’s durable, handles well and has excellent suspension. She’s a shade girthy and vibrates a bit much but is adorned with button starting, retains a kicker, carburates flawlessly, and handles the nasty side of off-road riding with gusto. The Rieju MR300 Racing sells for a palatable $9499 (the MR300 Pro is $10,499), which is a bit tastier than a new Husqvarna TE300i priced at $12,299.