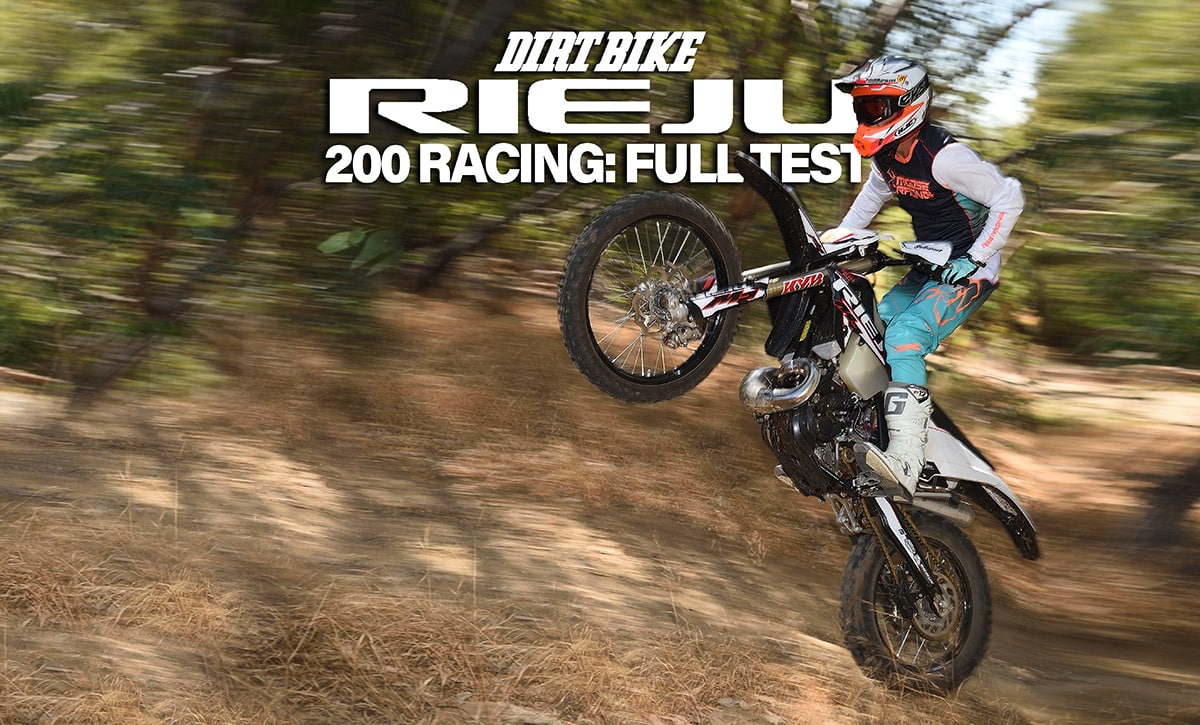 Today there’s a groundswell of interest in small two-stroke trail bikes and very little product to satisfy the demand. The Rieju MR200 Racing is one of two such bikes now available in the U.S. (along with the Beta 200RR) and might have all the right elements to spark the second coming of the 200.

We’ve tested a number of Rieju two-strokes this year, but it’s still an obscure manufacturer that very few riders know of. Here’s the backstory: Back in 2017, GasGas updated its two-stroke off-road bike with an influx of capital from new owner Torrot. It resulted in an excellent bike, but availability was poor. Then KTM’s parent company came in and purchased controlling interest in GasGas, primarily to obtain the trials bikes. The newly redesigned GasGas off-road two-strokes were abandoned. That’s where Rieju stepped in. This is a small Spanish company that had long been supplying the European market with small two-stroke street bikes. Rieju obtained the tooling and the rights to produce GasGas off-road two-strokes under its own name. For now, the bikes are still produced in the KTM-controlled GasGas factory, but that will change soon.

The 200 phenomenon was always an American thing. In the tight woods of the east, a full-size 250 was simply more motorcycle than most riders wanted. Those conditions didn’t necessarily exist in Europe, but Kawasaki, Honda and Yamaha all made 200s in the ’80s specifically with America in mind. That generation of bikes probably suffered the PW50 syndrome; they didn’t change and they didn’t wear out, so they were passed from rider to rider on the used-bike market while new-bike sales went flat.

KTM entered the picture in 1997 with a more competition-oriented 200, and that was the final knockout punch for the last remaining Japanese 200, which was the Kawasaki KDX. It was discontinued in 2006 after being left unchanged for over 10 years. The KTM triggered a second heyday of the 200 in the U.S., but it wasn’t sold in very many other markets. That made it an expensive bike to produce. It finally vanished at the end of 2016. At that point, it shared almost nothing with other KTM models. It wasn’t a 125, it wasn’t a 250; it was a 200 only.

Likewise, the Rieju 200 is primarily for the U.S. market and production is very limited. Unlike KTM, the Rieju MR200 Racing shares parts across the board. Externally, the bike looks virtually identical to the 250 and 300 two-strokes. Both the bore and stroke have been reduced (62.5 x 65.0mm versus 66.4 x 72.0mm on the 250), which means it has a different cylinder, head and crank. Pretty much everything else is the same—same Keihin carb, same gearbox, same ratios. Final gearing is much lower on the 200—12/50 versus 13/49.

Even if you aren’t familiar with older GasGas motorcycles, you’ll recognize the basic platform. Rieju two-strokes follow the same formula that has made Euro two-stroke off-road bikes such a success in the U.S. It’s a case-reed 6-speed with a mechanical power valve and an externally mounted electric starter. That starter drives the flywheel of a Kokusan ignition, similar to the design on KTM off-road two-strokes prior to 2017. Unlike current KTMs, Rieju still has a kick-starter. The Rieju’s chassis design falls right in line with the type used by KTM, Husqvarna, GasGas, Sherco and Beta. It uses a steel frame with a central backbone. The suspension components are KYB—linkage in the rear and open cartridge in front. The brakes are Nissin, the tires are Michelin and the handguards are Polisport.

You might expect the Rieju to be completely foreign, but it’s not. When you sit on the bike, the layout is very KTM-like. Most of the initial feedback says, “Oh, yeah, I’ve been here before.” The bike doesn’t feel that unusual until you get into really tight, difficult terrain. Then, everything is easier than you expect. Whether you’re trying to cope with a deep mud rut or climbing a rock pile that’s more stone than dirt, riding the 200 comes easily. You might think that it’s because the bike is lighter than a 250 or 300 two-stroke. It’s not. On our scale, the 200 Racing is 243 pounds without fuel. That’s 8 pounds more than a Husqvarna TE300i. The reason that the MR200 feels so light goes back to engine characteristics that we have experienced many times before. Most of your sensation of mass comes from the motor—the power delivery, the engine braking, the gyroscopic effects of the crankshaft and the throttle response. The 200 runs like a small bike, so you interpret that as less weight.

The price, of course, is power. The 200 doesn’t have the low-end pulling power or the midrange hit of a 250. That won’t surprise anyone, especially those riders who are veterans of the 200 era. The Rieju doesn’t really run like a KTM 200, though. That bike had more low-end torque, less power in the middle and then revved out a little higher. The shape of the Rieju’s dyno curve would be the same as that of a typical 250 two-stroke but at a lower level.

If you could separate the motor characteristics from the overall handling, you’re once again in familiar territory. The Rieju handles much like a KTM or a Husky. If you look at the frame geometry, the numbers are almost identical, and we would suspect that even the flex characteristics of the chassis are similar. The suspension is different, of course, but the KYB fork and shock are well-balanced and plush. You can tell that the bike is aimed at tight trail riding at low speeds. That’s exactly what the suspension is set up for. The rear linkage is tucked away better than a Husky’s or KTM XC’s, so you’re less likely to hang up on logs and rocks. The standard fork spring is rated at 4.2 N/mm. For comparison, the Yamaha YZ250X’s fork springs are 4.3 N/mm. Overall, the setup is too soft for really big whoops at higher speeds, and the bike feels totally out of place on a motocross track. That shouldn’t surprise anyone.

Our gripes with this motorcycle are all ticky-tacky. The motor has a little vibration, we don’t like the standard tires, and we wish it came with a spark arrestor. In the big picture, we’re delighted with it. Prior to this year, we didn’t even know how to pronounce Rieju. Now, we talk about them all the time. The five test bikes we’ve ridden in recent months have all been pleasant surprises. Of them all, the 200 Racing is the most difficult one to explain. It’s hard to down-sell anyone on a 200. But, those riders who remember the glory days of the 200 two-stroke will understand, and the Rieju MR200 is a worthy successor to that legacy.