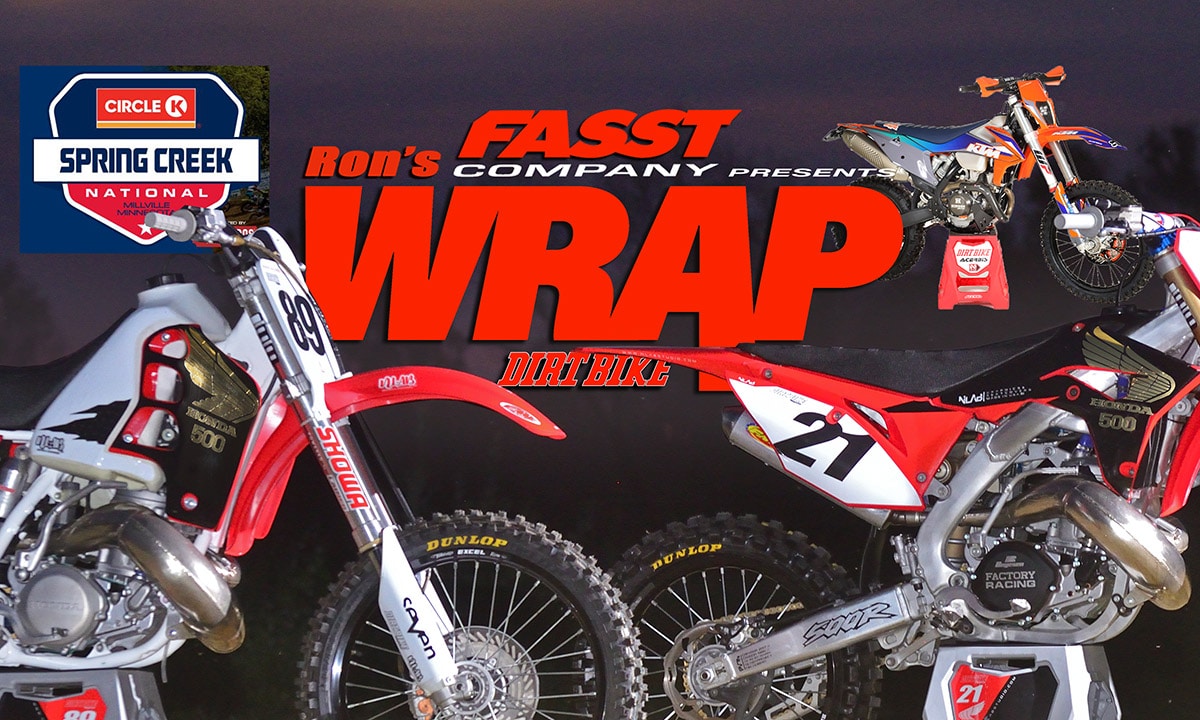 Last month we did a very unusual comparison between two 500 Hondas. One represented bikes of a bygone era and another was from a time that hasn’t yet come–and probably never will. Nic Gubert of NLAB Studios built them both. First, he teamed up with Italian fabricator Andrea Rapaccioli to create a hybrid with a 1996 Honda 500 motor in a modern aluminum Honda chassis. The bike is a work of fine art, as you might expect when a graphic artist teams up with an engineer. But in the past, we’ve seen beautiful 500AF Hondas that didn’t work as well as the originals. To see exactly how this one worked, Nic also built a more authentic 1999 CR500 with the original steel frame.

We’ve seen some other attempts at mounting 500 motors in early aluminum frames that didn’t go well. The increased rigidity of those first aluminum frames made bikes that were even more difficult to ride. It turned out those flexy steel frames of 1986 were a good match for the brutish two-stroke powerbands. Now, advancements in suspension and chassis design are allowing 500s another chance. Gubert shipped a 2018 Honda chassis and a 1996 motor to Rapaccioli in Cortemaggiore, Italy to be pieced together, and then Covid 19 hit and the whole project went on the back burner.

The steel-frame CR500R was assembled simply because Gubert had accumulated so many spare parts in the process of building his hybrid. At one point, he placed an ad for a spare motor because he wanted an electrical system. A more or less complete ‘89 model materialized and he jumped on it. The process of restoring an original 500 is in some ways more difficult than fabricating one with a modern chassis. It’s very difficult to find authentic parts. In vintage racing circles, there’s a big difference between a display bike and a race bike. If you find perfect original parts, you don’t want to wear them out. Gubert’s steel bike was intended to be a racer, which meant he would not concern himself with finding the period-correct stock parts. That’s how it ended up with a desert fuel tank and aftermarket fenders. 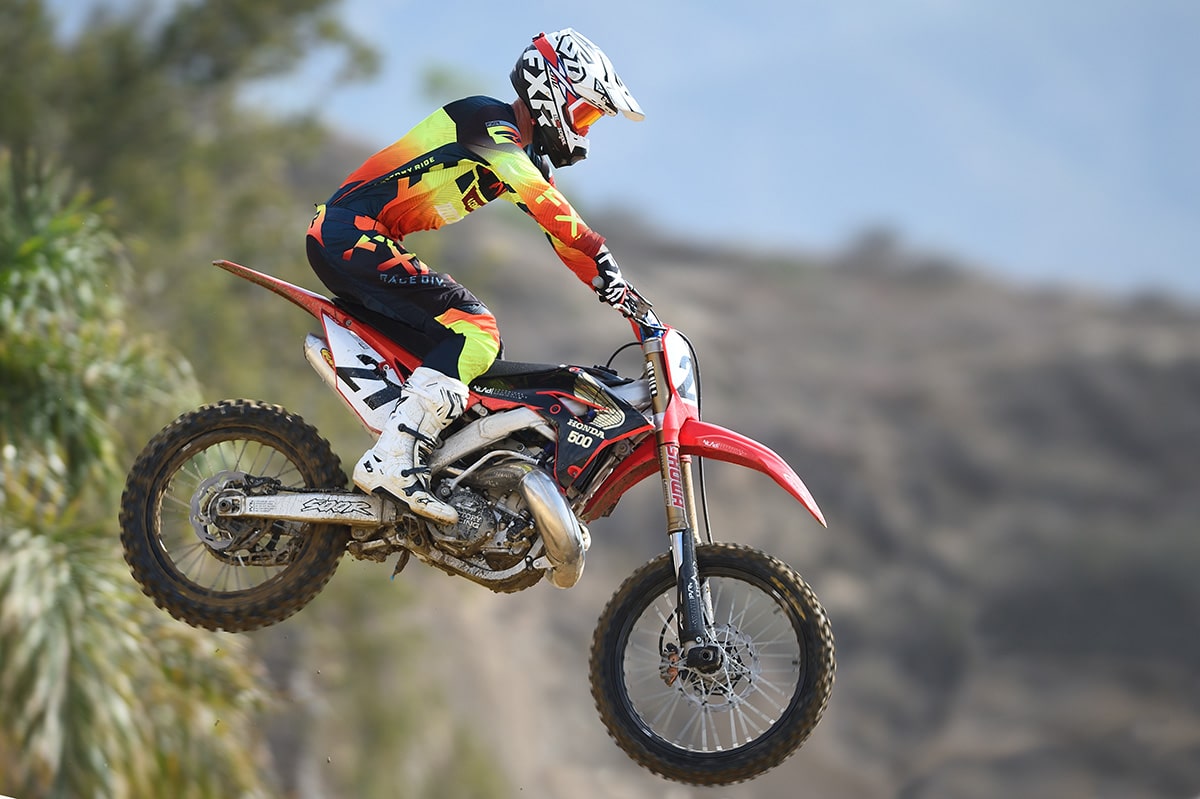 Our first day with the 500s went as these projects often go. There were teething problems. The modern 500 hybrid astounded everyone by starting on the first kick. The other one was more stubborn. When they eventually ran, familiar issues began to emerge. We didn’t realize how drastically ergonomics have changed over time. Sitting on the hybrid felt normal. The bars were in the right place, the seat/tank junction was flat and the overall layout felt normal. The traditional 500 felt completely foreign. The seat seemed to drop you into a pocket. In order to shift your weight forward, you didn’t necessarily scoot forward as much as lean. In the seated position, it seemed like the bars were high. In the standing position, they felt droopy and low.

Clearly, you could get used to all those things. David Bailey rode pretty well on a bike that was laid out just like that. The other 500 took less adjustment time, but it was still hard to ride them back to back. By the time we were done, we developed respect for both bikes, but found them very difficult to compare. The whole story will appear in the September 2021 print edition of Dirt Bike. 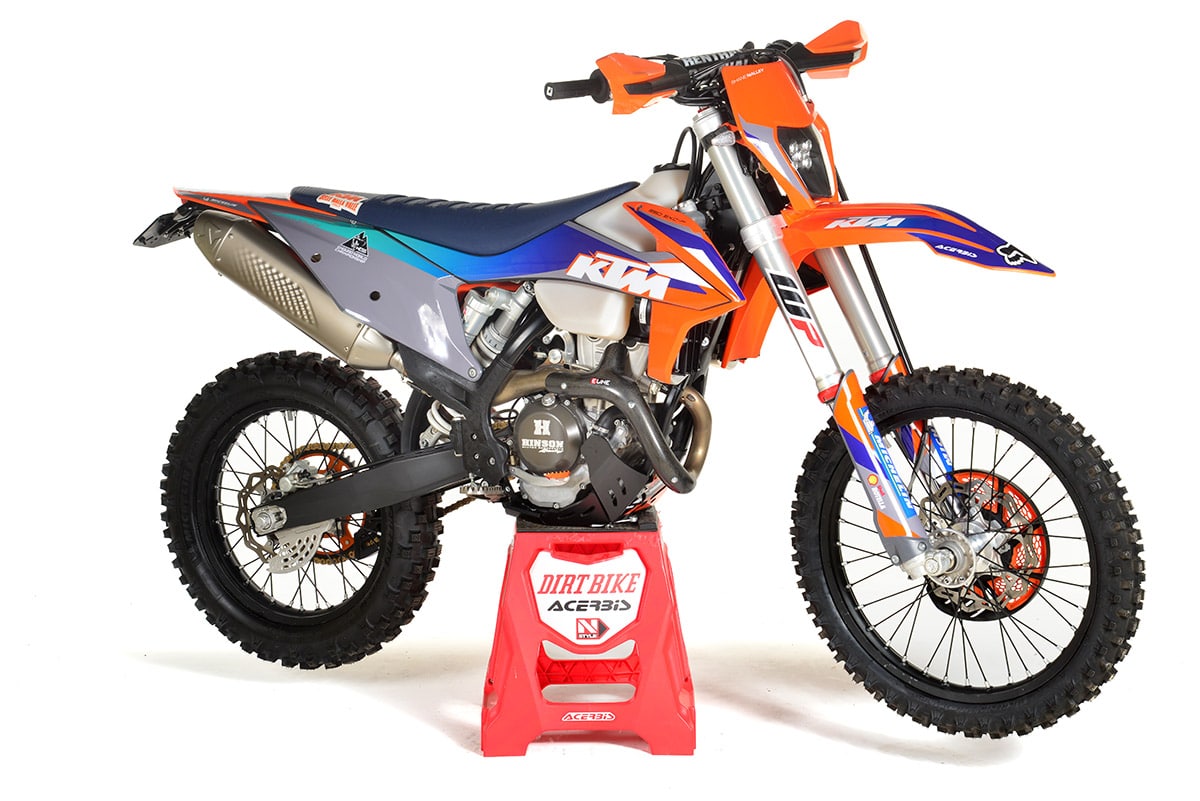 Shane Nalley dropped by the Dirt Bike photo lab this week to show off his personal 2021 KTM 350EXC dual-sport bike. Shane is one of the most experienced factory mechanics in the industry, having worked for factory races teams including Honda, Suzuki and Pro Circuit. His bike reflects the same kind of care that he gave Mike Kiedrowski’s factory bike. It will be featured in an upcoming issue of Dirt Bike. 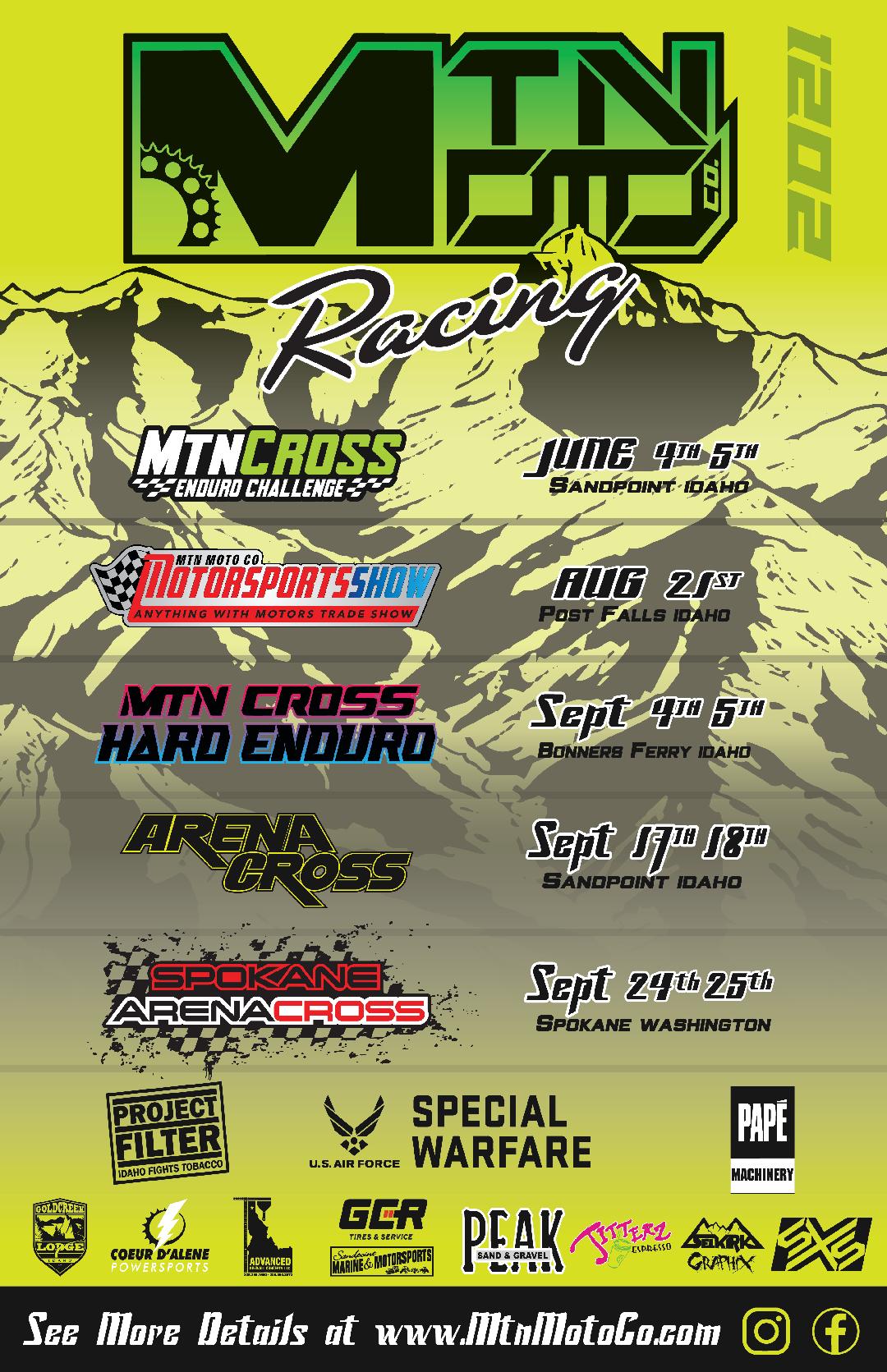 Mtn Moto Co is a group of riders in the Pacific Northwest who have and endless supply of enthusiasm for all things moto. That includes extreme enduro, arenacross, motocross and just about everything else you can do on wheels. Click here for what they have coming up.

AN EVENING WITH CHAMPIONS 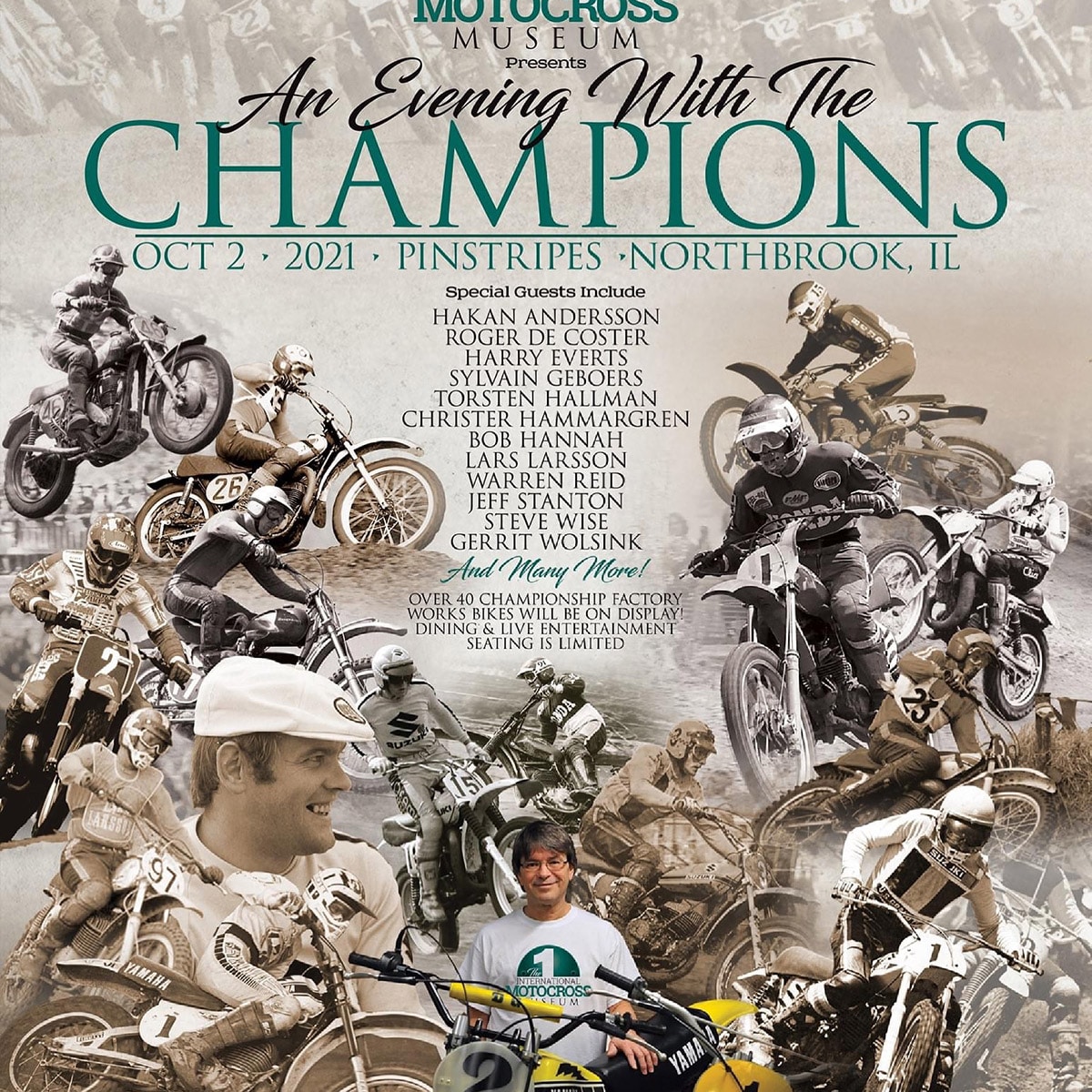 Hi-Torque publications has partnered with the International Motocross Museum to help present An Evening With The Champions. This is a fundraiser  designed to bring the museum to a physical reality. For more information, click here. 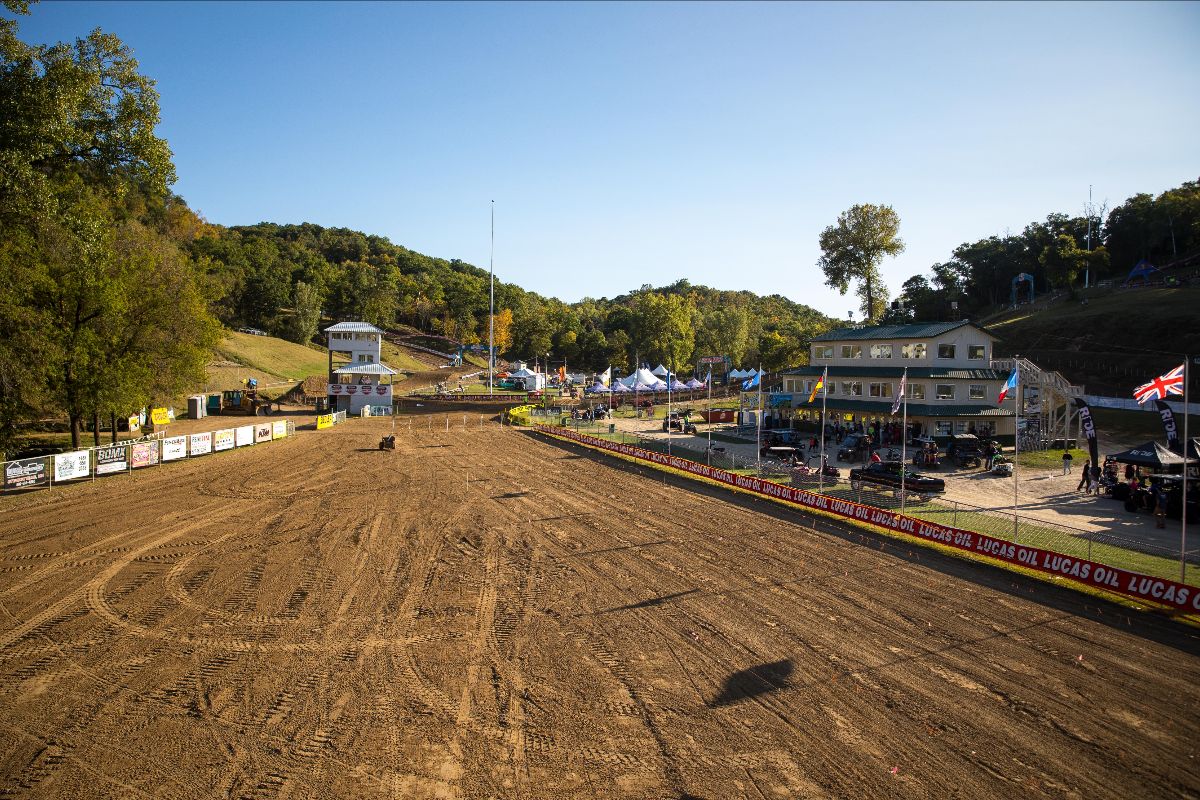 This weekend will signify the halfway point of the 2021 Lucas Oil Pro Motocross Championship.  Spring Creek MX Park is set to host the sixth stop on the summer calendar. The Circle K Spring Creek National, presented by Frescados Tortillas, also serves as the season premiere on NBC broadcast network, featuring a live showcase of the second and deciding 450 Class moto. As a result, racing at Spring Creek will commence one hour earlier, beginning at 10 a.m. PT / 1 p.m. ET. The results will be posted here at www.dirtbikemagazine.com as soon as they are official.

On Track School is the honorable recipient of three scholarships donated in memory of Jonathan Mayzak. Jonathan graduated from On Track and walked across the stage at Loretta Lynn’s to receive his diploma in 2015 with a heart of pure gold. A tragic accident took his life all too soon in 2019. Donations in Jonathan’s honor through fundraising efforts have been given to On Track School from the Mazyak-Leachman family to support student scholarships. The fund will continue to grow and Jonathan’s memory will live on within our community and for this we are truly grateful.
Applicants may apply at www.ontrackschool.com. Jonathan’s family will be participating in the selection process. We will announce the scholarship award recipients prior to the start of the 2021-2022 school year. On Track School is a fully accredited K-12th grade private online school.  Contact: Tasha Renfro, (407) 754-5704, [email protected], www.ontrackschool.com.