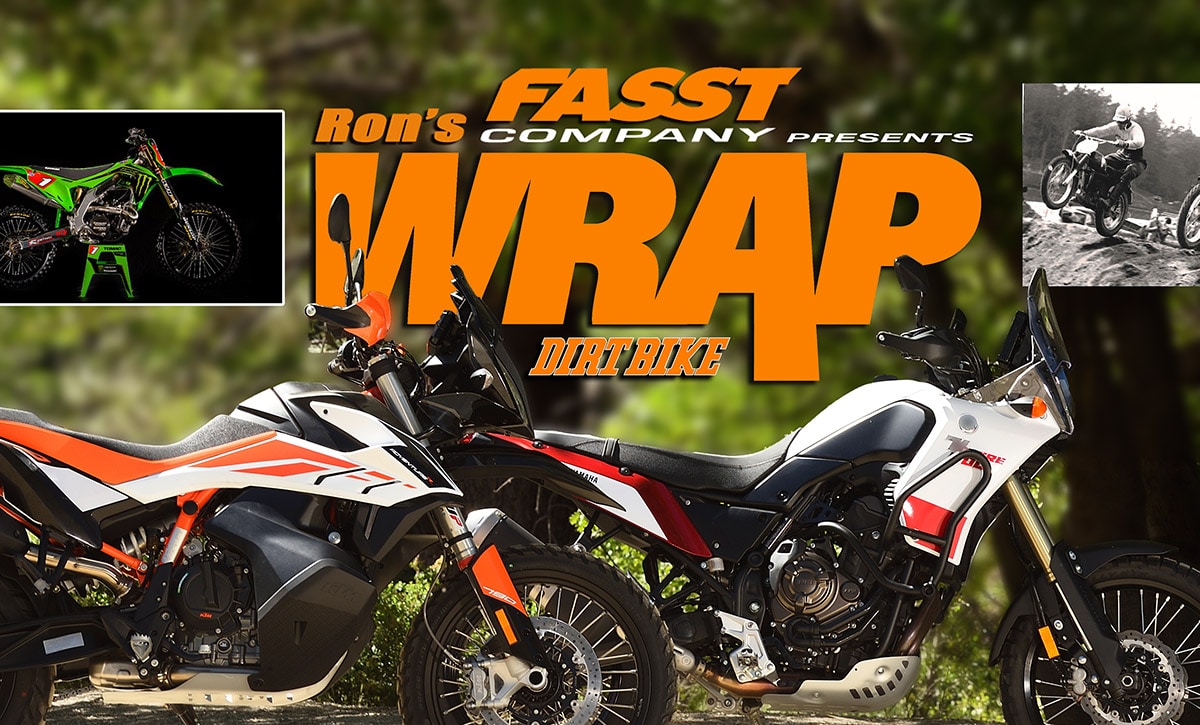 We’ve been serving our quarantine on adventure bikes for the last month or so. It gave us a chance to ride the new Yamaha Tenere 700 back to back with the 790 Adventure R. Up front, we’ll tell you that these have become our two favorite ADV bikes, but they are much more different than you might think. KTM attacked the problem with technology. Yamaha did it with purity.

The KTM 799cc parallel twin motor started life in the 790 Duke street bike. It was installed in an all-new chassis with WP Xplor fork, a no-linkage rear shock and a 21-inch spoked front wheel with an 18-incher in the rear. The tires are Metzeler Karoo 3 Tubeless. Most of the 5.3-gallon fuel capacity is carried down low, around the skid plate in an oddly shaped, doubled sided plastic cell to keep the center of gravity low. The 790 has an extensive electronic portfolio. Through a series of digital menus, KTM allows you to choose from three levels of throttle response and 9 levels of traction control. You also have anti lock braking and several other features. 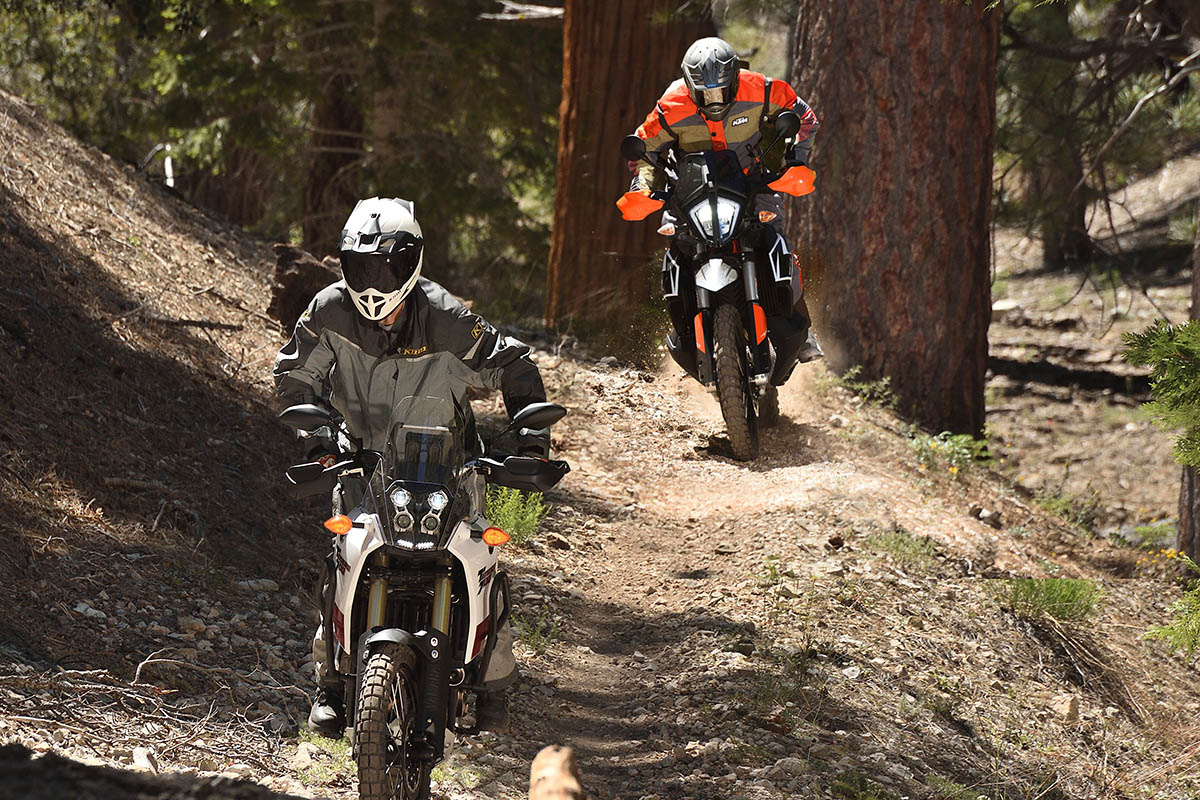 Like KTM, Yamaha started with an existing motor; this one from the MT07 naked bike. The Yamaha’s is a full 110cc smaller in displacement than the KTM. The T7’s center attraction is its price; it has an MSRP of $9999. That’s $3700 less than the KTM. Yamaha had to forgo almost all of the electronic features that you usually see in this type of bike. There’s no traction control or any of that; just anti-lock braking, which you can disable with the push of a button. The Yamaha has KYB suspension with linkage in the rear. It has 8.3 inches of travel in front and 7.9 inches in the rear, as opposed to the KTM’s 9.5 inches at each end. The Tenere also has 18 and 21-inch spoked wheels with fairly aggressive Pirelli Rally tires, but in this case they are not tubeless. The Yamaha’s fuel capacity is significantly smaller, at 4.2 gallons.

The KTM obviously has a big advantage in displacement and that translates to considerably more power. That doesn’t necessarily make it better for off-road riding. The Yamaha is freakishly smooth and tractible. You can put it in a tall gear, drag it down to idle-speed rpm and open the throttle as unskillfully as you like. The Yamaha pulls well and seems to find traction. The KTM has so much more power that it truly needs some electronic intervention. Maximum throttle response and zero traction control can make for a wild ride. The adjustable throttle response and traction control system makes all the difference. By selecting the middle throttle-response and traction-control settings, you can effectively arrive at a Yamaha-like feel, although the 790 will still rev higher and make more power on top.

The Tenere is approximately 20 pounds heavier and has a very high center of gravity. Part of this is because of where the fuel is carried, part is because the engine is taller and has its crankshaft mounted higher in the chassis. All that makes it awkward to manhandle at lower speeds, even with the standard seat. The KTM, on the other hand, is much easier to manage when you get into those first-gear situations where it’s a challenge to keep any bike upright. Once again, the KTM feels more like a dirt bike. 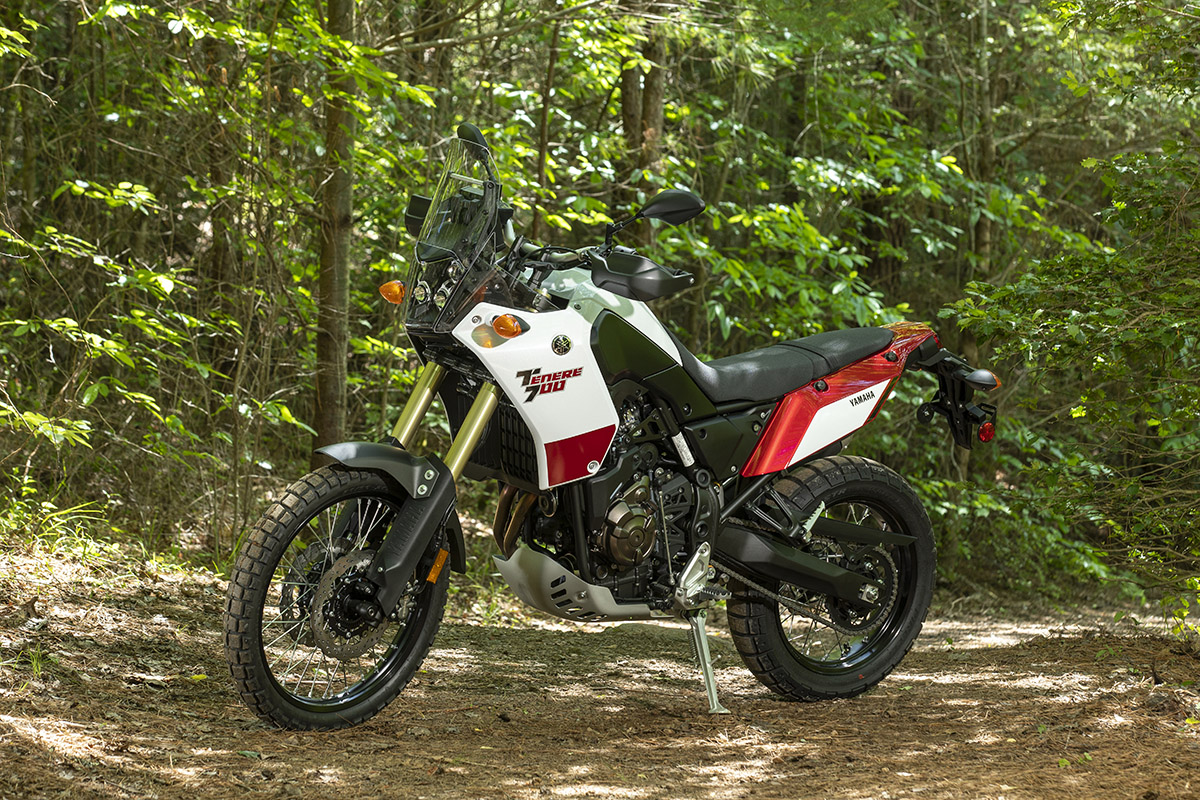 On a smooth dirt road, they both have cushy, comfortable suspension. In general, it takes a little more to make the KTM use up all its travel. That’s why it’s a good idea to bump up the suspension settings before you go into the dirt. Yamaha’s makes this pretty easy–there’s a big knob on the rear shock that you can twist by hand to increase preload. The KTM requires an allen wrench, but even that is easier than using a hammer and a punch like a conventional dirt bike. Like we said, we love both and we’re going to keep on riding them. Look for a full test in the November, 2020 print edition of Dirt Bike. 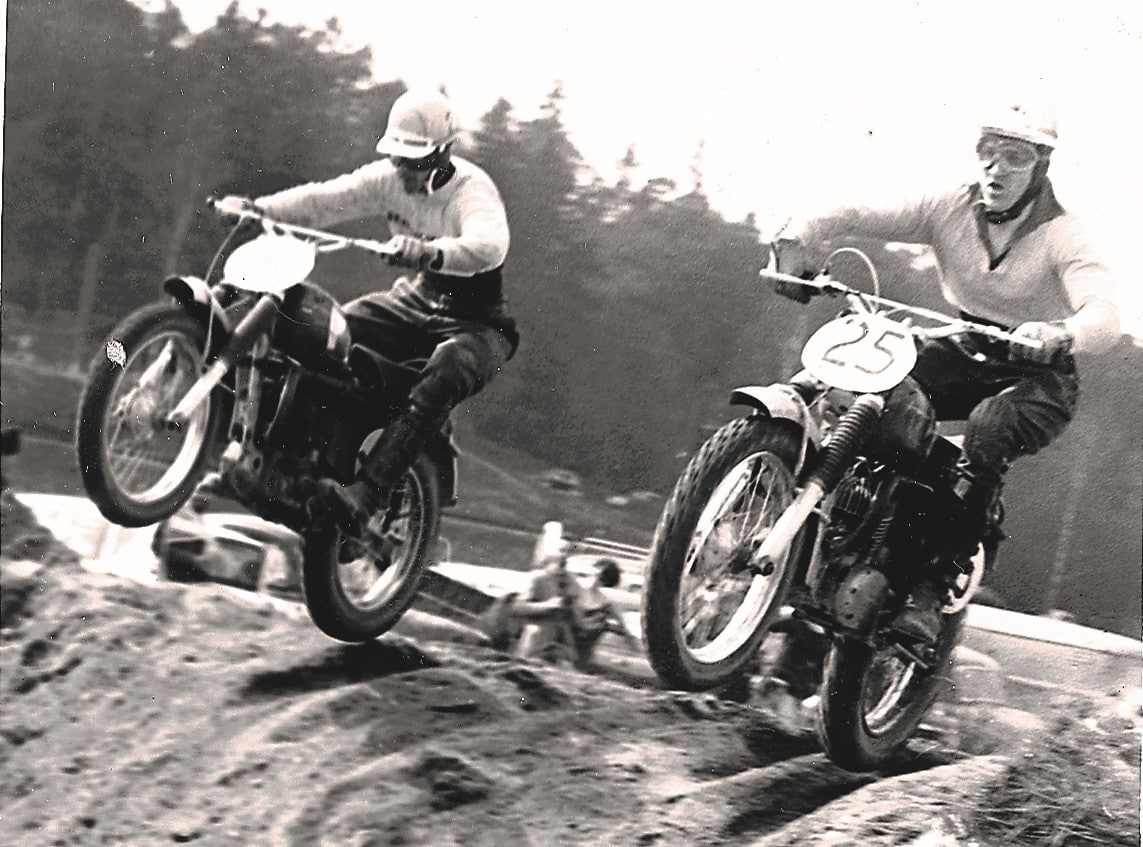 Kenneth Olausson does a monthly blog for Huqvarna called the Good Old Times. This month it’s about the season of 1961, when Husqvarna had some of the best riders in the world, but was on the brink of going out of business. It’s always a good read loaded with cool old photos. You can read about the 1961 GP season here.

The American Motorcyclist Association awarded four special honors at the conclusion of the 2020 Monster Energy AMA Amateur National Motocross Championship held Aug. 3-8 at Loretta Lynn’s Ranch in Hurricane Mills, Tenn. AMA National No. 1 plates were awarded in 36 competition classes at the event, as well. Stilez Robertson, of Bakersfield, Calif., won the 2020 Nicky Hayden AMA Motocross Horizon Award, which the AMA presents annually to an amateur rider poised for professional success. Robertson went 1-2-1 in Open Pro Sport and 2-1-1 in 250 Pro Sport to take both titles at the AMA Amateur National Motocross Championship.  Rider of the Year was Levi Kitchen, of Washougal, Wash., led 62 out of 66 laps, winning all six motos he competed in at the event. He raced in the 250 B Limited and 450 B Limited classes. Ryder DiFrancesco, of Bakersfield, Calif., is the 2020 AMA Motocross Youth Rider of the Year. He won all six motos in Supermini 1 and Supermini 2, leading 55 of 61 laps. He has won eight AMA National Championships so far in his amateur career. The 2020 AMA Vet Rider of the Year is Brandon Scharer, of Gardena, Calif. Scharer went 2-1-1 in the Junior (25+) class at Loretta Lynn’s, leading the second two motos from start to finish. In his previous eight trips to Hurricane Mills, his best finish was seventh. 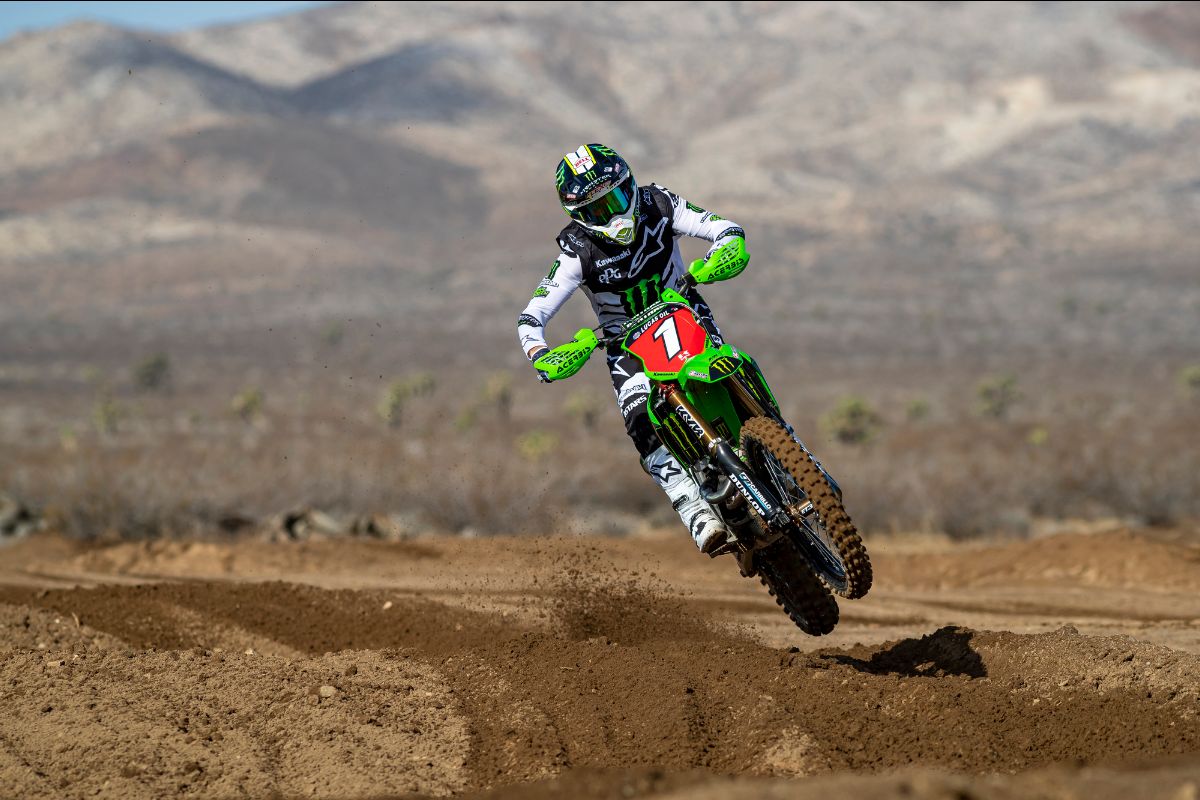 With the Loretta Lynn Amateur Championship in the books, it’s on to the first-ever Loretta Lynn National! Due to the COVID-19 global pandemic, MX Sports, the promotor of the AMA Pro Motocross Championship, has had to get creative with the 2020 schedule and put contingencies into place in order to meet state, county, and local government regulations. For the first time in Pro Motocross history, the series will race multiple rounds with no fans in attendance and even feature a doubleheader weekend at RedBud that will host Rounds 4 and 5 only two days apart. It all starts this weekend at 2 p.m. eastern time on Mav TV. Kawasaki’s sent out some Eli Tomac stats as he opens his bid for a fourth consecutive. Since turning pro in 2010, Eli Tomac’s average overall finishing position at his first race of the motocross season is 2.4. He has only finished off the podium at the opening race of the season twice in his career and has never finished lower than fifth place overall.  We will have live results at dirtbikemagazine.com as soon as they are available, along with Brandon Krause photos.

VEGAS TO RENO IN PROGRESS

The 2020 Best in the Desert Vegas To Reno is in progress right now. On live tracking, it looks like the two American Dakar rivals/buddies are in front. Skyler Howes is a few miles ahead of Ricky Brabec as of 10:30. You can check out live tracking here.