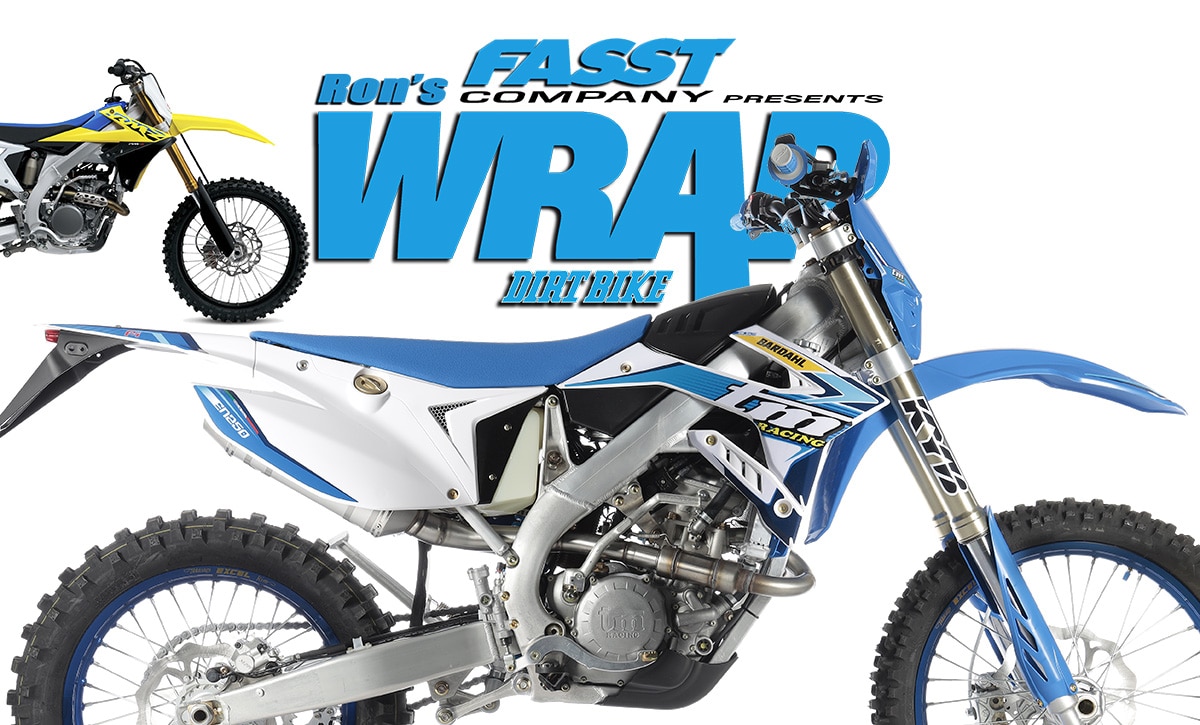 The TM 250EN 4T Fi is in the garage now, awaiting a race-test this weekend. This is one exotic motorcycle. Any TM is already exotic. This is a small Italian company that specializes in race bikes, with a number of world championships to its credit and even a few GP motocross wins. Even by TM standards, though, this bike is special. It has the newest four-stroke motor to come out of the factory with gear-driven cams and twin exhausts. In one of its very first races, it won an MX2 GP moto.  Now the motor has found its way into an off-road bike.

TM just announced pricing for its 2021 models. The MSRP will be $11,395, making it the most expensive production 250 in the U.S.  TM used to be known for its high prices–it was part of the mystique. In recent years, though, KTM and Husqvarna have come up to TM’s prices and even surpassed them in many  cases. In this case, the TM importer has a lower-priced option. The previous version of the 250 with a single pipe is still available for $400 less. That’s still high, but not far from a Husqvarna FE250. Our test bike is a 2020 model, although there are no mechanical changes in store for 2021. Only graphics. 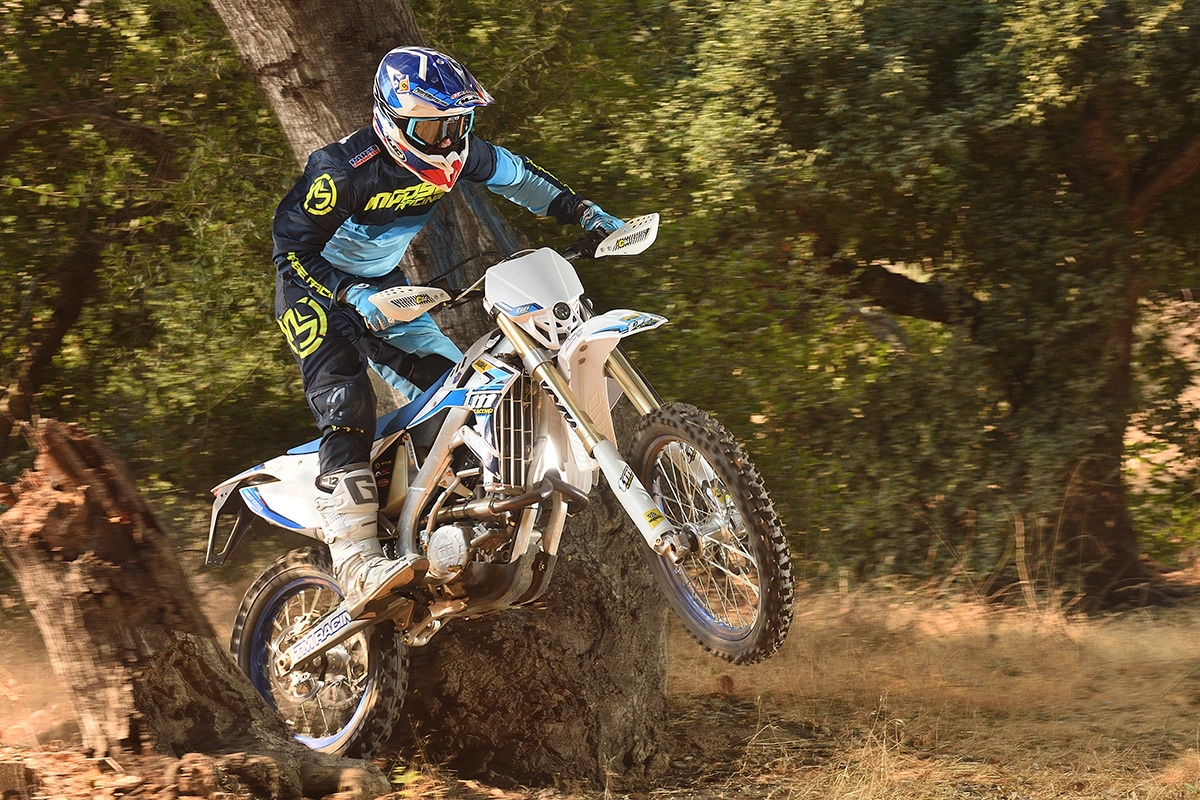 In this case, the TM is technically a closed-course competition off-road bike, similar to a Yamaha YZ250FX or a Honda CRF250RX.  The headlight and taillight disguise it slightly. It even has all the switches to be made into a dual-sport bike easily, including a horn. The blinkers and mirror aren’t there, but that infernal self-folding kickstand is. That’s part of a European plot to make every bike fall over and break its front brake lever. The U.S. importer offers Bridgestone tires so you don’t have to deal with Euro short-knob tires. 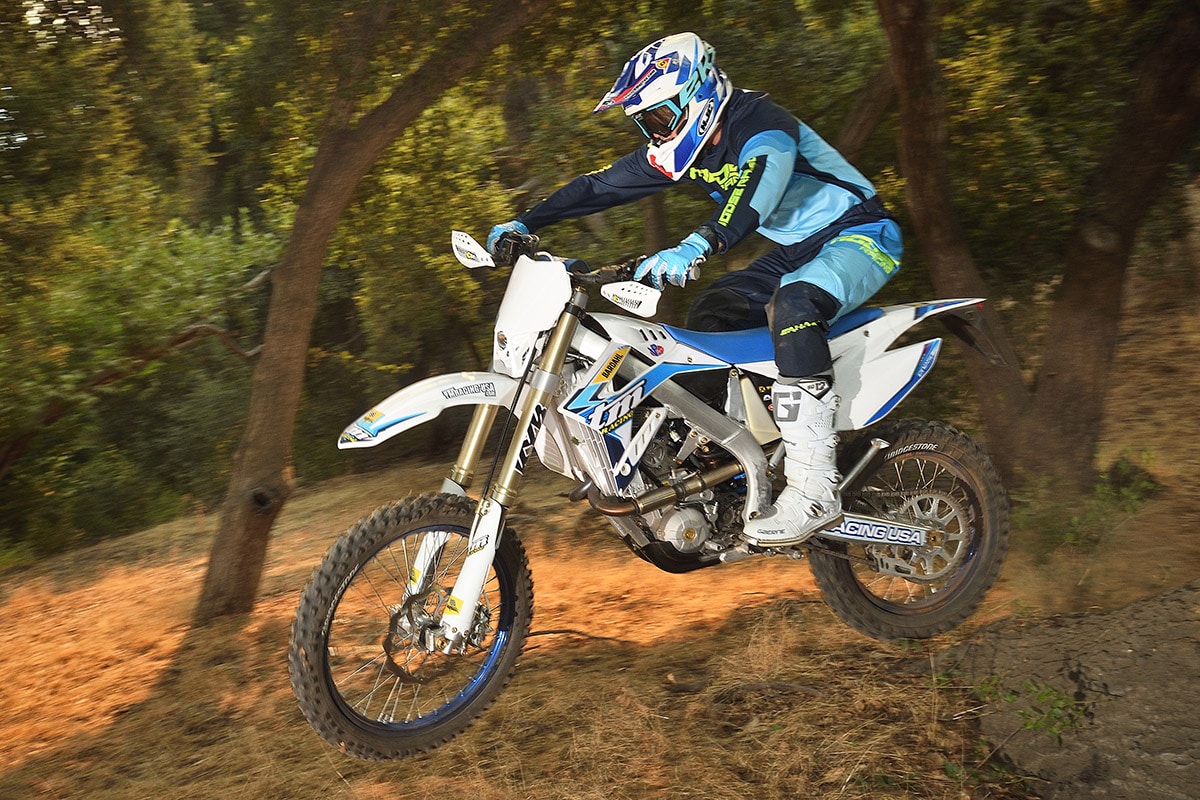 We have one day or riding on the bike so far, using a 2020 Honda CRF250RX as a companion bike for comparison. That bike, incidentally, is one of our very favorites. The TM withstood just about everything the Honda threw at it. Low-end power of the two bikes is similar, as was peak power. The Honda revs higher, but that’s after both bikes have hit their peak. In suspension, the TM was a little softer and more compliant on the trail. 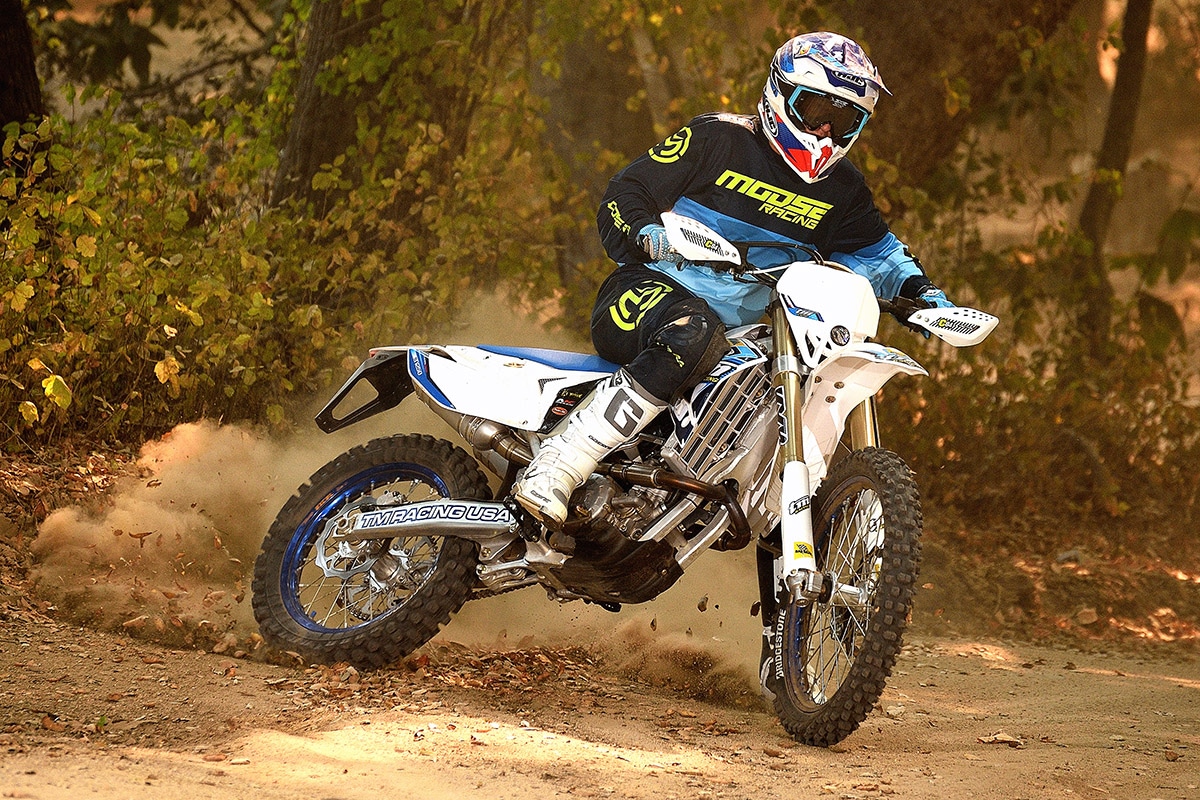 One thing you have to get used to is the TM’s intake noise. The fuel tanks is located under the seat while the airbox is up top, similar to a Yamaha. The TM’s airbox is much more open, though, so you feel like you might get your goggles sucked into the motor. You get used to it. We’re going racing this weekend at the NGPC Series in Preston, Idaho. Several riders will get to try the TM and we will have more to report in the December, 2020 print edition of Dirt Bike. 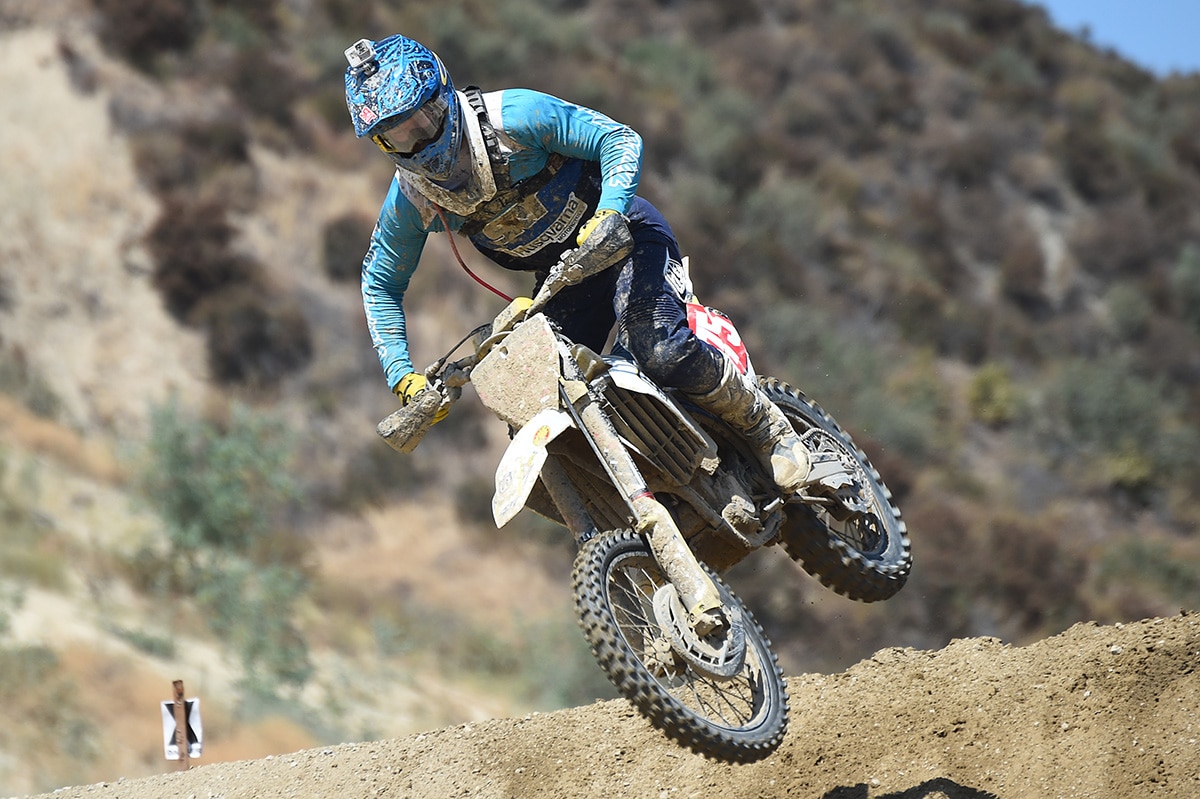 The National Grand Prix Championship Series got three races in before the Covid 19 shutdown. This weekend, it will pick up again with a new location. Cache Valley in Preston Idaho will host round four. In every previous round of the series, points were also given in the parallel District 37 GP series. This will be the first one that is for National Points only. As of right now, Husqvarna’s Austin Walton is the points leader, with his win in the most recent round. Zach Bell won the previous two rounds and he will be hungry to make a comeback. Go to the NGPC website for more.

GNCC TO PICK UP 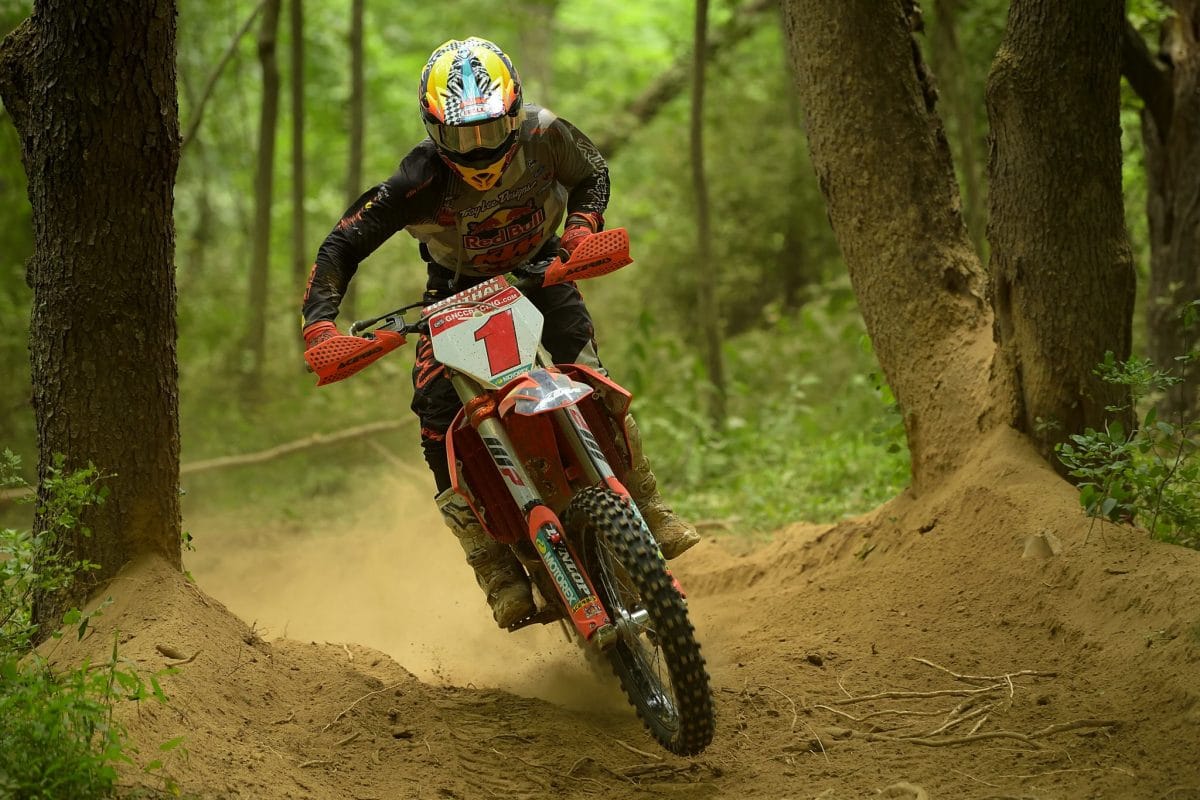 on Sunday, September 13, GNCC will take over Summit Bechtel Reserve and battle it out for round nine. FMF/KTM Factory Racing’s Kailub Russell finds himself sitting first in the points standings, with seven overall wins thus far in the season. Russell is out to earn his eighth straight National Championship. Currently sitting second in the points standings is Babbitt’s Online/Monster Energy/Kawasaki’s Josh Strang. However, this weekend will look a little different for Strang as he announced on August 20 that he sustained fractures to his scapula in a practice crash. Strang also said it looked like he would be out for 4-6 weeks, putting him still a couple weeks out of being back on the bike. His teammate, Babbitt’s Online/Monster Energy/Kawasaki’s Jordan Ashburn will look to improve his standings though, and hopefully earn that first overall podium finish of the season. Ashburn has been a consistent factor in the series this season, but has fallen short of a podium finish thus far.

KTM AND THE ISDE

Even though there will be no 2020 ISDE, KTM is offering the Special Six Days editions this year as a tribute to the race. Here’s what they say: Strong supporters of the FIM International Six Days Enduro for decades, KTM is backing the Italian organizers with a series of activities on the run up to the 2021 race. As the ultimate tribute to the sport’s biggest annual event, the 2021 KTM SIX DAYS models are built for the toughest special tests out of the crate.

WORLD TRIALS IS BACK

I’m hitting the road for Idaho now, so tune in next week!

HOW TO READ YOUR REED: MR. KNOW-IT-ALL