RIDING THE SWM 600 DUAL-SPORT: THE WRAP 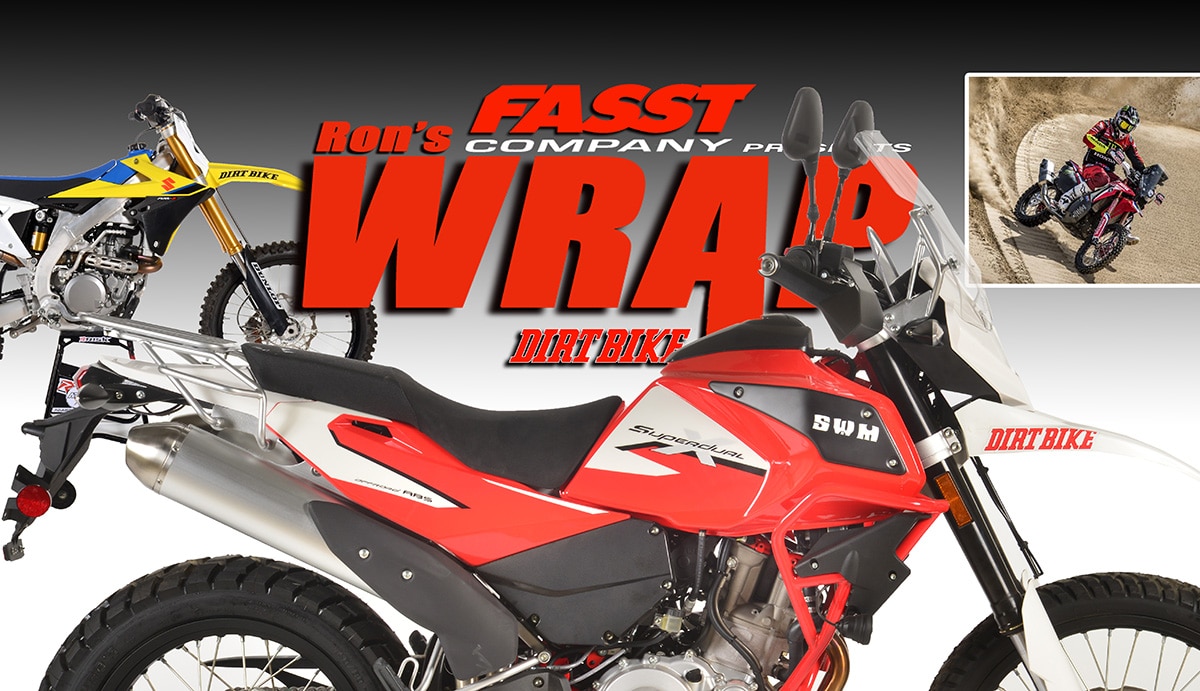 We finally got to ride an SWM Superdual X on U.S. soil this week. This as been a work in progress for two years now, but the U.S. importer has already received a container of them and they are arriving in dealers now. The story of how this bike came to life is fairly interesting and goes to show you that great motorcycles are hard to kill. The Superdual X might be unfamiliar to most riders, but there’s a very familiar heart beating inside. The  frame and motor come from the 2011 Husqvarna TE630. That bike, in turn, is based on the 610 and 510 Husqvarnas that can be traced all the way back to Sweden in the mid ’80s.

I got to ride the Superdual for the first time last year when I visited the SWM factory in Italy. The back story behind SWM has been told, but it bears repeating. The current SWM factory near Varese, Italy was once the Husqvarna factory. When KTM took over in 2013, manufacturing was moved to Austria, leaving a fairly modern, BMW-built facility behind. SWM was formed using the name of a long-defunct Italian off-road/trials bike maker, and the new company acquired the rights and the tooling to make the motorcycles that had carried the Husqvarna name prior to 2013. Most of the workforce returned to work after the involuntary layoff, business as usual.

The 2011 Husky TE630 was an overbuilt dual-sport bike, but in its new life, the motorcycle has been recast as a light adventure bike. It’s a much better fit. The frame itself is still the central backbone configuration that Husqvarna used back in the ‘80s, but the Superdual got a larger fuel tank (4.8 gallons), a Sachs rear shock, anti-lock brakes, a wind screen, a luggage rack, a centerstand, a hydraulic clutch, running lights and crashbars. The model for the new bike was clearly the Kawasaki KLR650, which went out of production last year. That left a huge void in the U.S. market and budget adventure riders have been in mourning ever since.

The SWM isn’t as inexpensive as the KLR was in its last form. But, at $8995, it’s still an incredible bargain.  The Superdual X is a modern, fuel injected motorcycle made in Italy, whereas the Kawasaki’s ancient carbureted motor was grandfathered in by the EPA and, in its final years, was manufactured in Southeast Asia. The SWM is also much, much more powerful than the Kawasaki–about 56 horsepower versus 35. 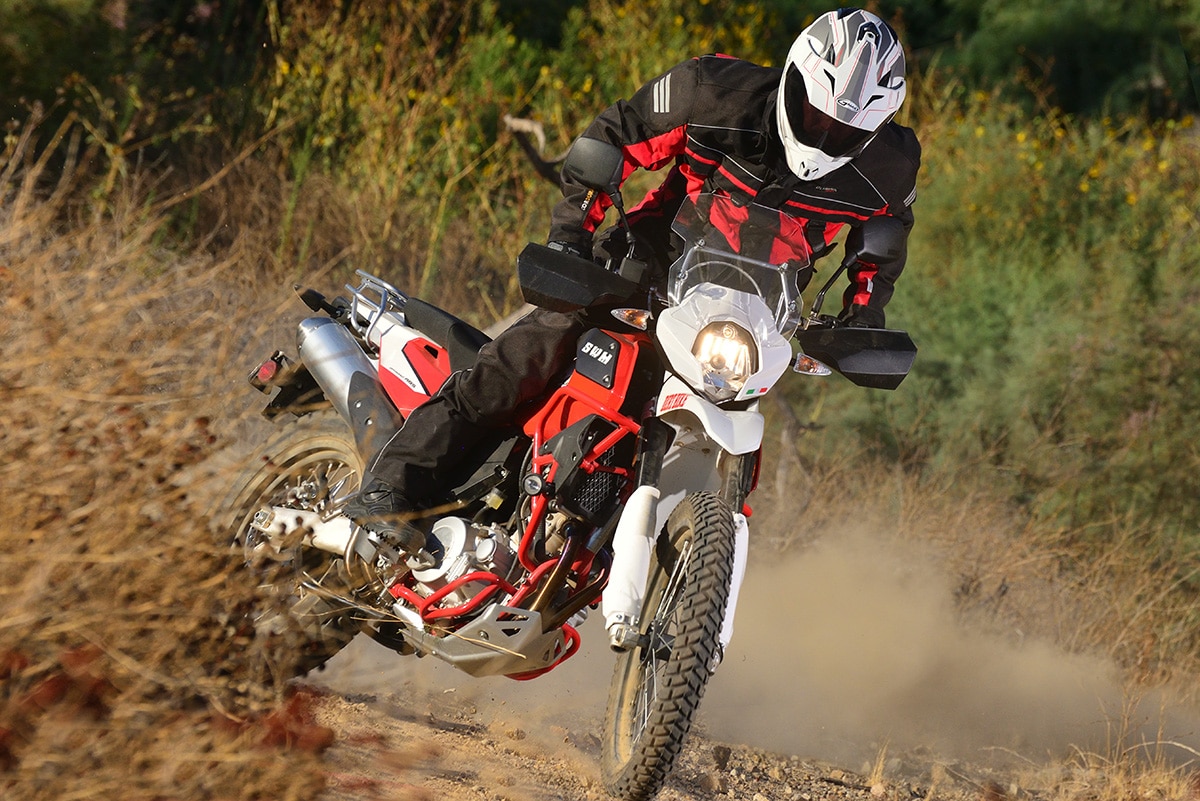 I absolutely loved the bike when I rode it in Italy. My biggest concern: would the EPA’s emission controls mess up the U.S. version? As it turns out, the bike runs exactly like it did in Italy. Evidently, the EURO 6 smog standards are similar to ours. Once it warms up, the bike doesn’t cough or stall. It has good bottom, then there’s a brief soft spot before it revs out to an excellent peak. In handling, it still has just enough of the old Husky to feel like a dual-sport bike. In other words, you can corner sitting down. Bigger adventure bikes force you to stand up through the turns because the seat is too far rearward. 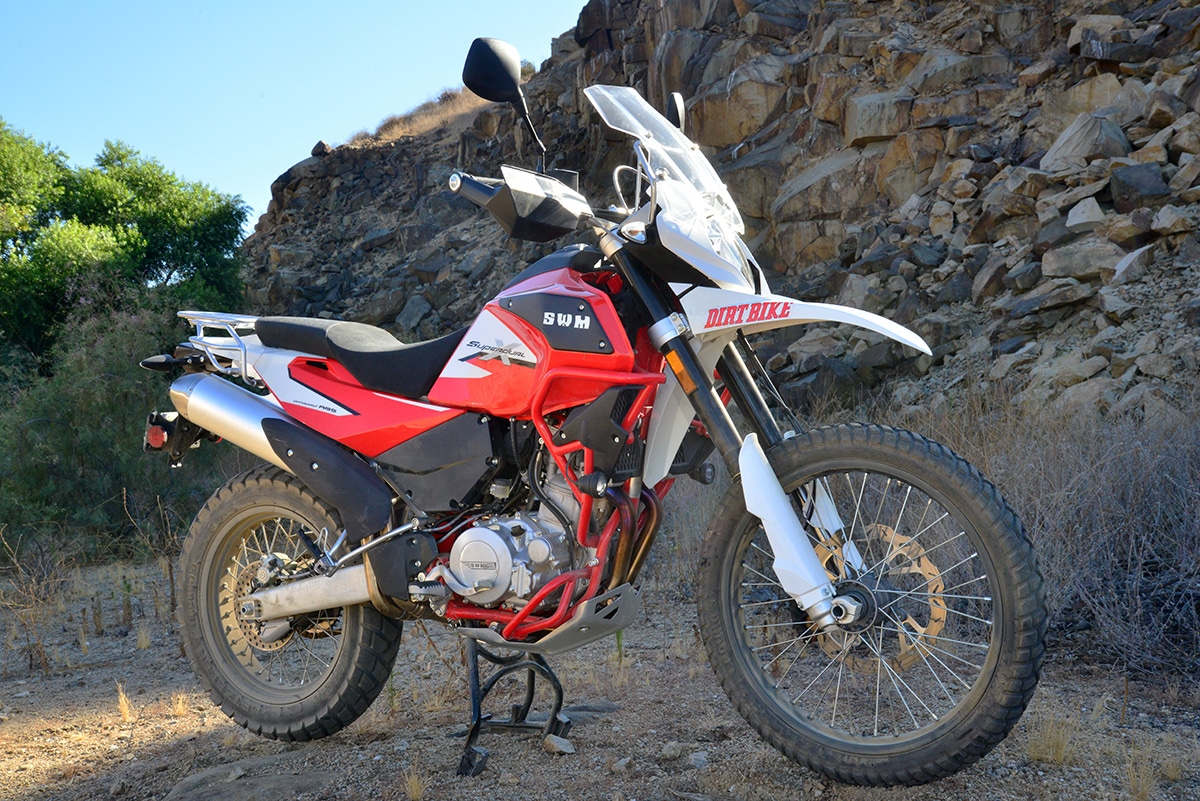 It isn’t fair to compare the SWM to the KLR650. It’s much better than that. Still, there’s nothing else on the U.S. market quite like it. This is a legitimate ADV bike worth of a cross-continental trek on a BDR- style adventure, but it’s priced cheaper than a decent dual-sport bike. For the full test, check out the November print edition of Dirt Bike. For more info on SWM, go to the U.S. SWM website. 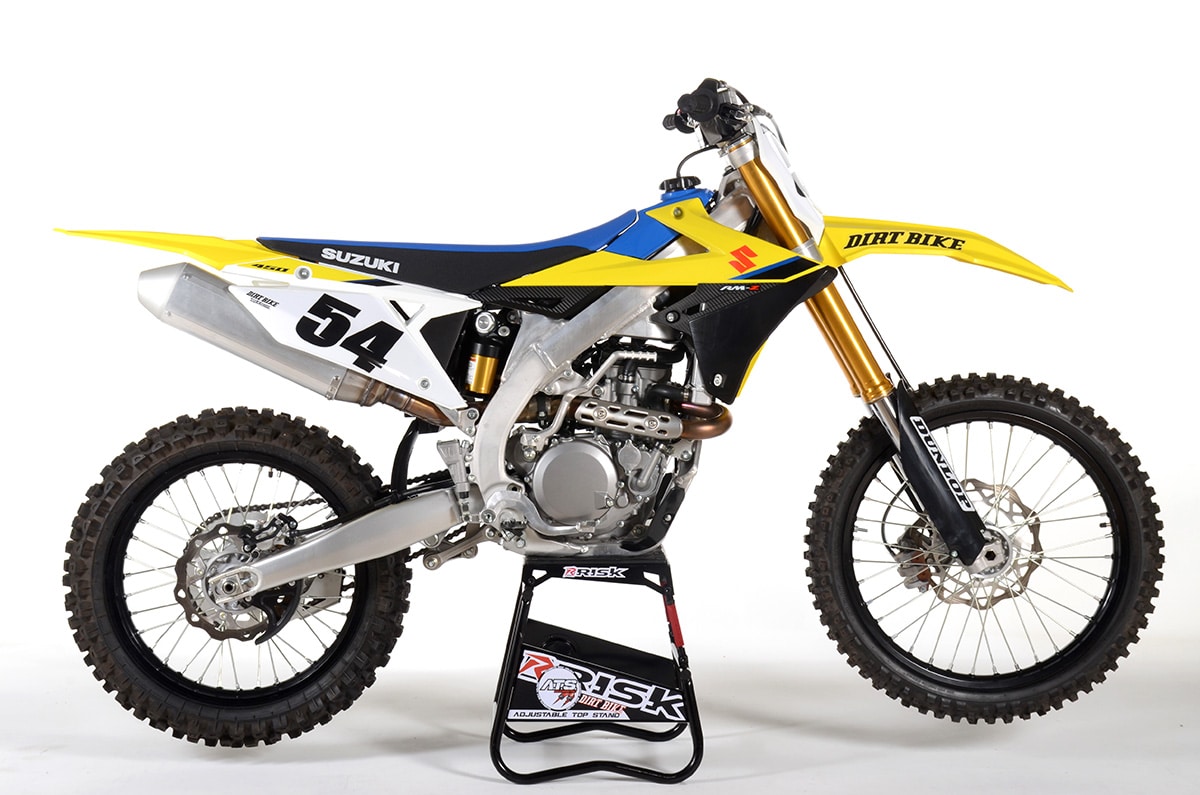 If ever there was a victim of cyber bullying, it’s the 2020 Suzuki RM-Z 450. From the comments generated by any Suzuki-oriented post, you would think the bike was a moped brought back from the ’70s.  Are people that offended that it doesn’t have electric start? A little perspective is in order.  The bike is a modern,  450 with too much power for 95 percent of the riders out there. It was updated two years ago with a new look an a long list of legitimate changes. Like any bike, it has strong points and weak points. 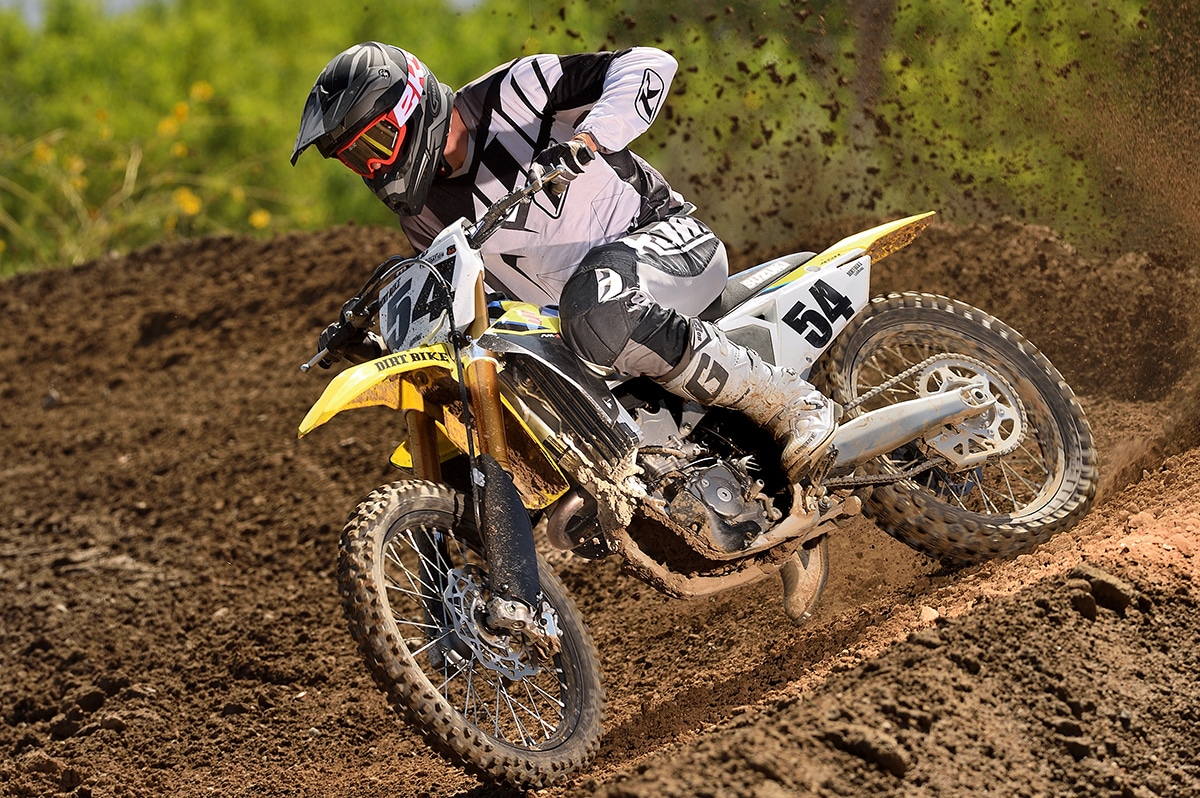 On the strong side, it has competitive power, good handling and what could be great suspension. On the weak side, it doesn’t have great suspension in stock form. It’s too stiff in the rear and/or too soft in front. Also on the weak side it weighs 240 pounds without fuel, which is roughly the same as the Yamaha and Honda, both of which have electric start. And it doesn’t have electric start. Back to the strength side, the suspension is easy to fix and the Suzuki is the least expensive of all the 450. We’ve heard that some left-overs have sold for less the $8000. Remember, this is a bike that the JGR team can make into a national-level winner. 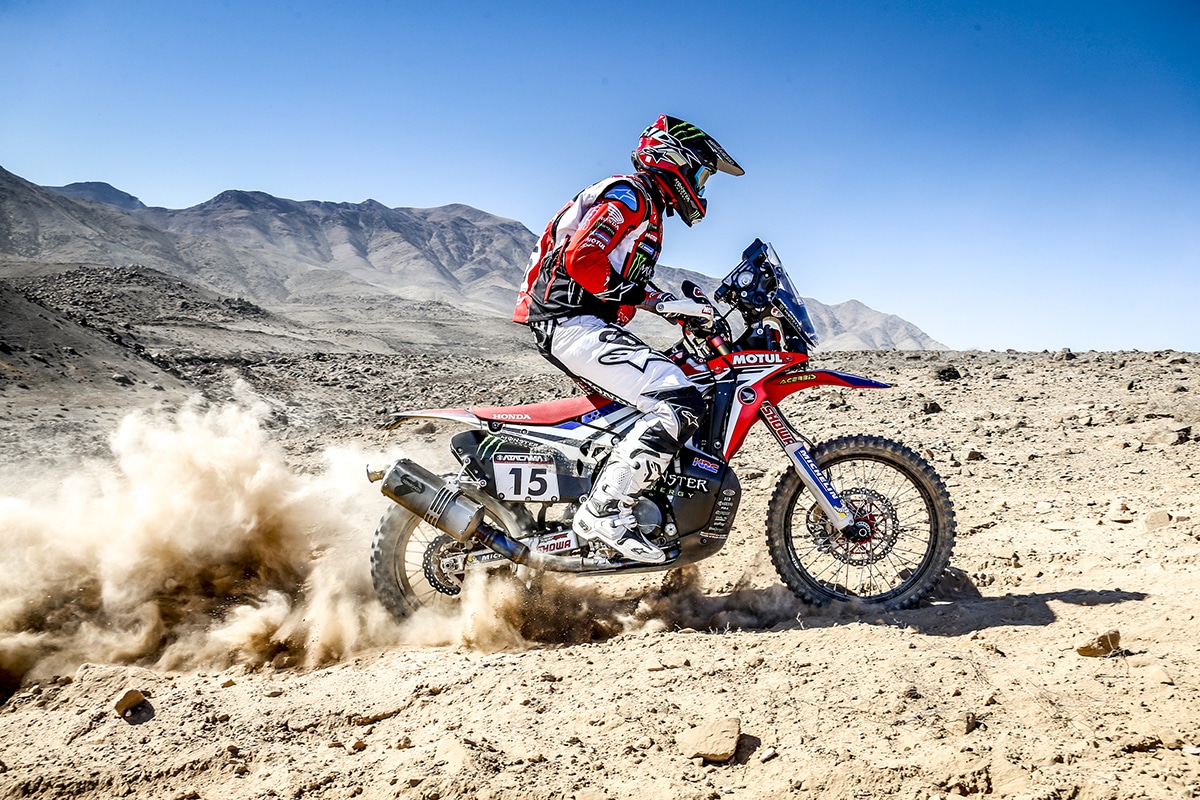 The third date in the Cross-Country Rallies calendar begins on 1st September with tech inspection and a prologue on the 2nd. In store are five stages in the Atacama Desert, the world’s most arid wilderness, which is set to include some 1200 kilometers of special stage against the clock. Monster Energy Honda Team will field their entire squad as they return to Latin American for the team’s only rally date on South American soil. Argentinean Kevin Benavides, winner of the last Atacama Rally, Spaniard Joan Barreda, American Ricky Brabec and local boy José Ignacio ‘Nacho’ Cornejo all line up. The three riders who had previously competed in the opening two rounds of the world championship will be joined by American rider Ricky Brabec, who returns to the Chilean desert after the eighth overall place taken in the 2018 edition. Although the race organisation has announced some new stretches, the race route remains basically the same as the previous edition, with a single bivouac in Tierra Amarilla, less than 10 kilometers from Copiapó and will include a marathon stage where riders are not allowed to receive any outside mechanical assistance.

After a short summer recess the AMA National Hare and Hound series got back underway in Panaca last weekend. It’s been a good year for Joe Wasson and his Beta. He collected his third overall win of the season and finds himself with a 9-point lead over Jacob Argubright. There are three rounds left,  so anything can happen.

Marty Tripes and Tripes Promotions Group has recently announced race information about their 2019 $60,000 Big 3 Two-Stroke MX Event. A huge guaranteed Cash Pro Purse of $30,000 ($10K per race) will be awarded to the top Expert riders. Also, over $30,000 ($10K per race), in contingency prizes, products, and gift certificates will be awarded to amateur racers making this one event you will not want to miss!

• Vintage and modern two-strokes, mini’s, four-strokes and women
• No club to join and low race entry cost
• The Marty Tripes 100cc Works Revenge will bring out the top pros
• Great race spectating and fun for all
• Pre-register before September 17th for a chance to win a new FLY 10×10 EasyUp
• Entry discounts for multiple amateur classes available
• Simple on-line pre-registration can save you money
Where and when:
Cahuilla Creek Anza, CA Sept. 21, 2019
Cahuilla Creek Anza, CA Oct. 26, 2019
Glen Helen San Bernardino, CA Nov. 16, 2019
How to sign up:
Pre-registration at HTTPS://secure.tracksideprereg.com/tpg