RIDING THE KTM 690 DUAL-SPORT: THE WRAP 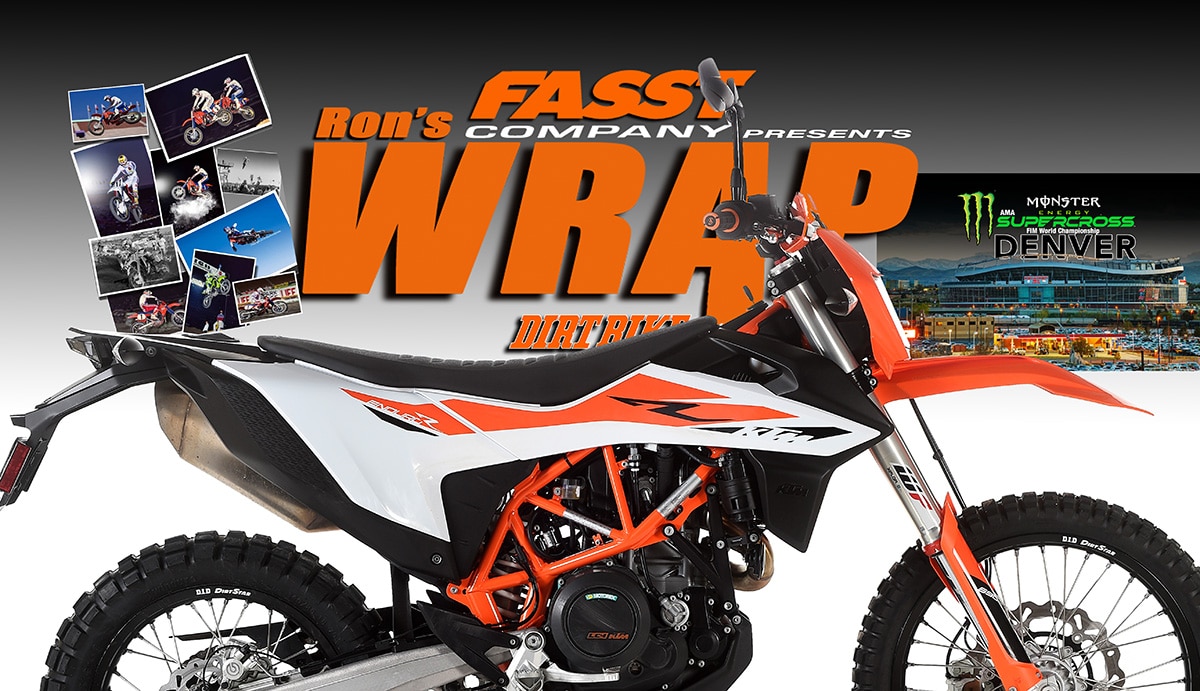 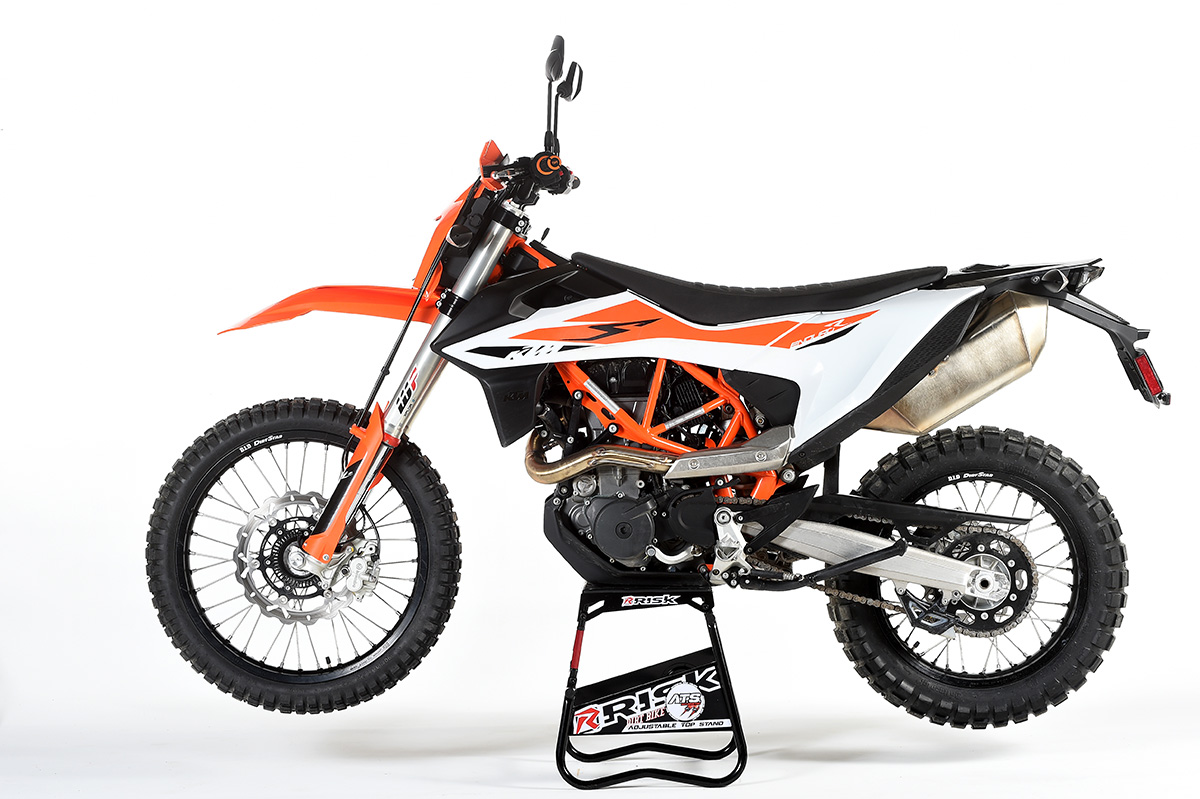 For this week’s Friday Wrap Up, the 2019 KTM 690 Enduro R  is centerstage. We only have one day on the bike, but that’s enough to leave us in awe. This is still the most powerful single-cylinder motorcycle we know of.  The bike exists in a gray area between hard-core dual-sport bikes and big adventure bikes. It’s powerful, comfortable and  and has a number of street-bike features like a jumbo ADV bike, but its layout, suspension and handling allow it to go on rides with full-time dirt bikes.

For 2019, the bike got a redesign. The frame, bodywork and suspension are new and the engine is updated. Like many of the machines in the adventure bike world, it has a big collection of electronic features. The throttle cable is gone, it has cornering antilock braking and lean-angle sensitive traction control, not to be confused with the traction control used on KTM motocross bikes, which is a completely different system. It also has a quickshifter system, which mean you can upshift easily without the clutch.

The frame is new, but not dramatically different from that of the previous 690. It’s still a trellis design, but the geometry has been tightened up, the flex characteristics have changed and (thankfully) it has more steering lock. The new plastic includes a new tank, which has increased fuel capacity (now 3.6 gallons). 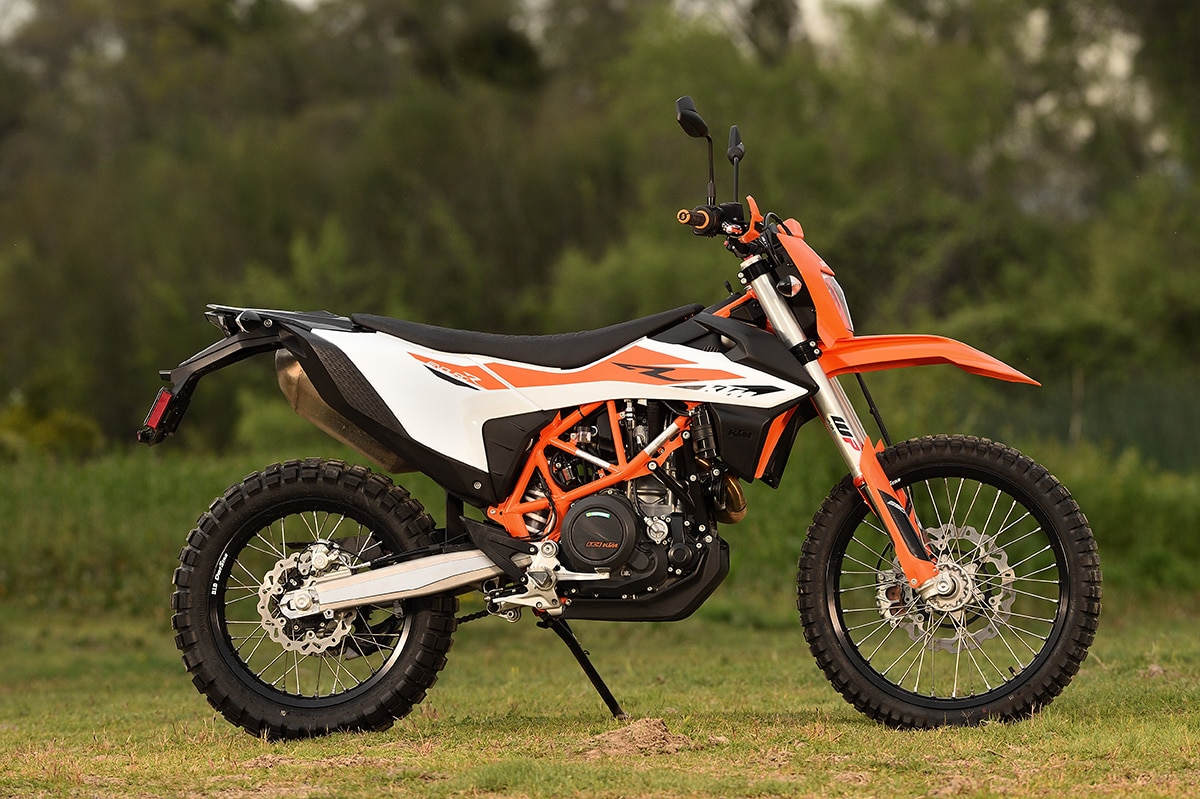 The motor is the star of the show in this bike. It has dual balancer shafts, a slipper clutch and a six-speed gearbox. Did I say it’s fast? the torque is unreal! When there’s traction, it pulls like crazy from way down low. If the rear wheel spins, the traction control kicks in and steals horsepower. This isn’t like the traction control that’s common on street bikes, where the motor suddenly starts missing and hesitating–it’s more like the bike were suddenly upshifted two gears. If you don’t want traction control, that’s understandable. KTM gives you a button to disable it. 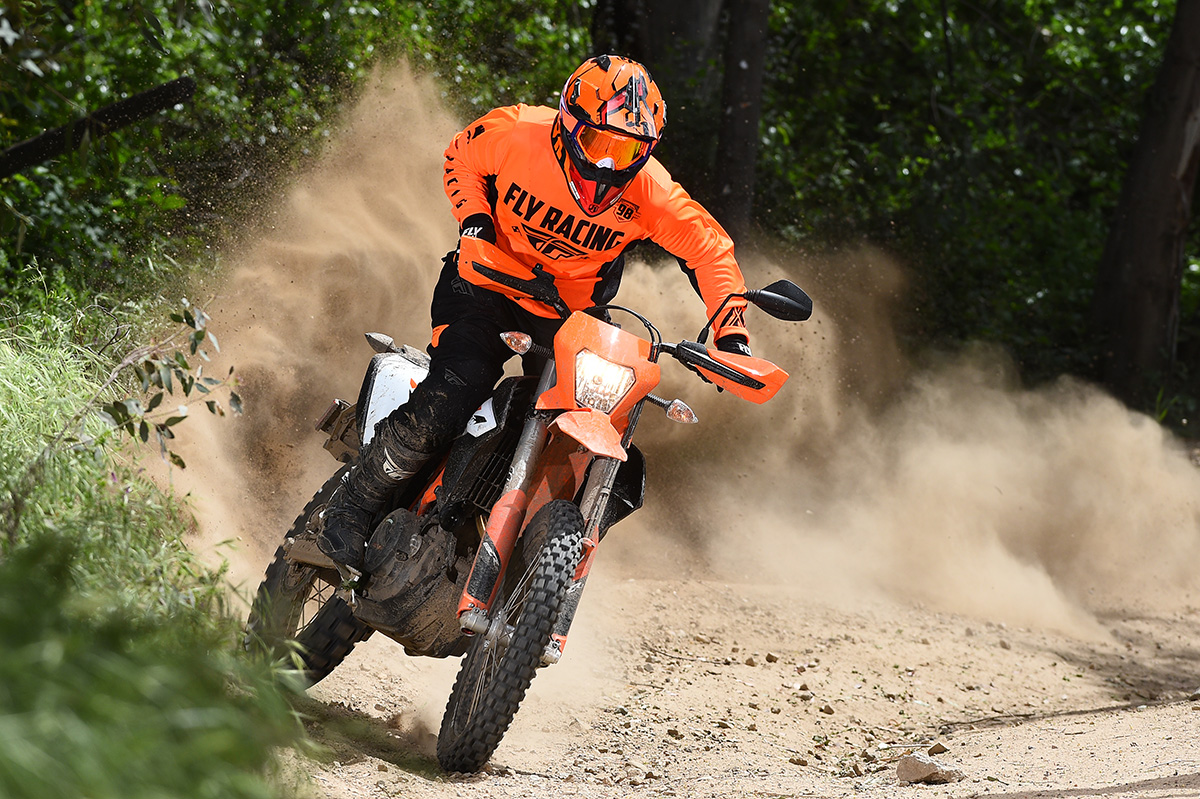 The bike’s dirt capabilities are limited by its weight. KTM claims it is 320 pounds without fuel. That exceeds the capacity of the fabulous Dirt Bike scale, but that seems like a realistic figure and KTM has been shockingly honest about all its advertised weight numbers recently. The bike’s mass is similar to an old-school Honda XR650L, but the KTM has twice as much power. Literally. So it can go just about any place a full-time dirt bike can go, but you have to use your head. You don’t want to fail on a hillclimb attempt, and you don’t want to dig it out of a mud bog. It’s just too much bike. 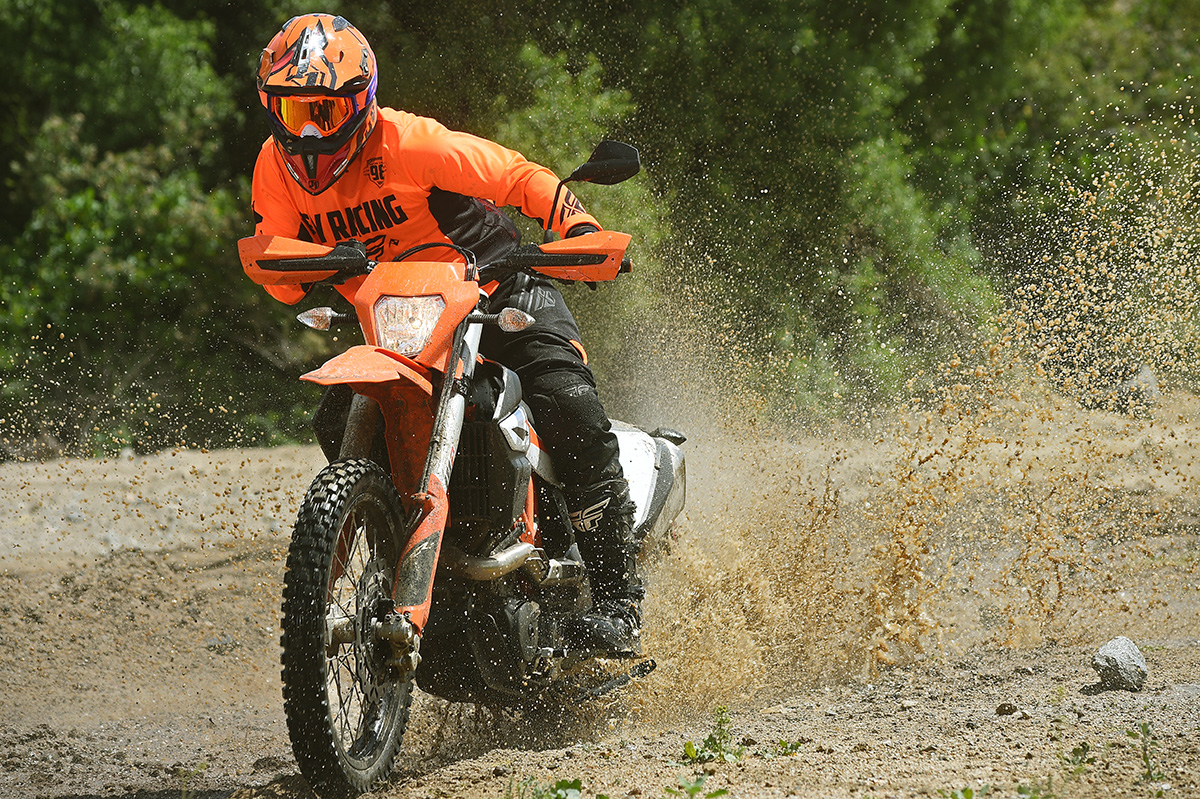 KTM has a video explaining some of the electronic features of this bike and the SMC version. They won’t let us keep this bike for long, but we have a number of rides in mind. This would be a perfect bike for a Mexico trip or a BDR adventure. There’s even been talk of racing it in the Virginia City GP on April 27. The full test will appear in the July, 2019 print edition of Dirt Bike.

In preparation for the Pro Riders to get their test riding in before the Outdoor MX Season starts, Glen Helen will host a Pro Only Practice 10am-12pm on all Thursday Practices starting April 11 – May 30. Regular open practice will be available 9am-10am & 1pm-Dusk for all other riders. The Vet, Staduimcross and peewee tracks will be open normal hours on Thursday. All tracks will be prepped and watered for practice days. For more information call 909-880-3090. 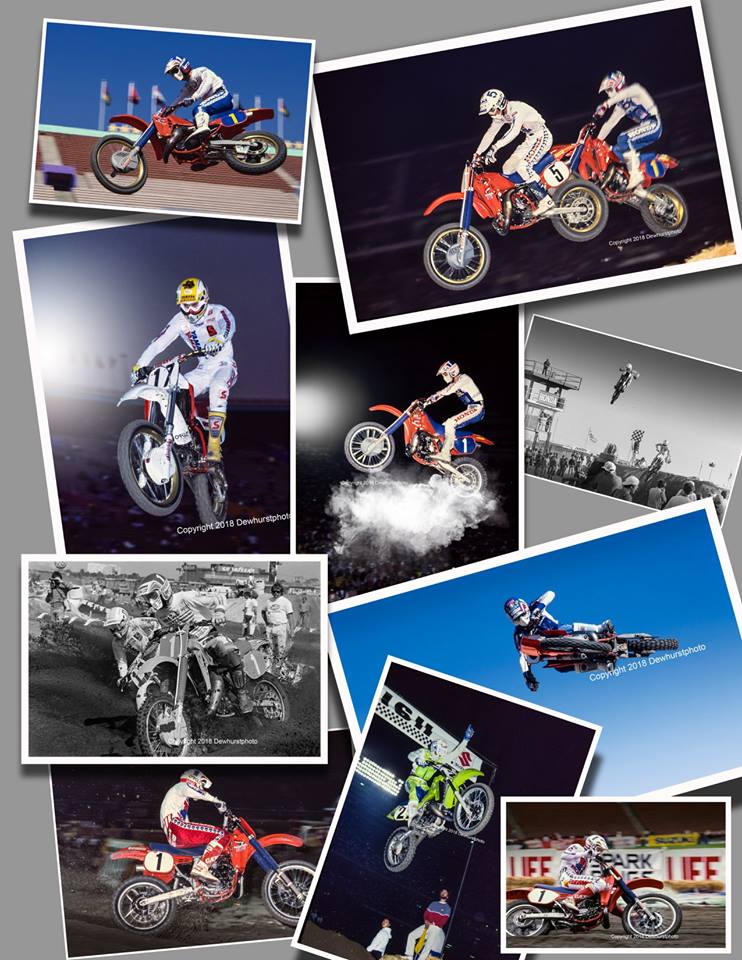 David Dewhurst came out to help me shoot photos of the KTM 690 this week. I have a few broken ribs right now and I was grateful for the help. Truthfully, David is the greatest motorsports photographer there is and I hope that something will rub off on me, just by standing nearby. He’s very generous about sharing some of his classic images on his Instagram page–it’s worth checking out. You can also buy select prints and posters on his website: https://www.dewhurstphoto.com 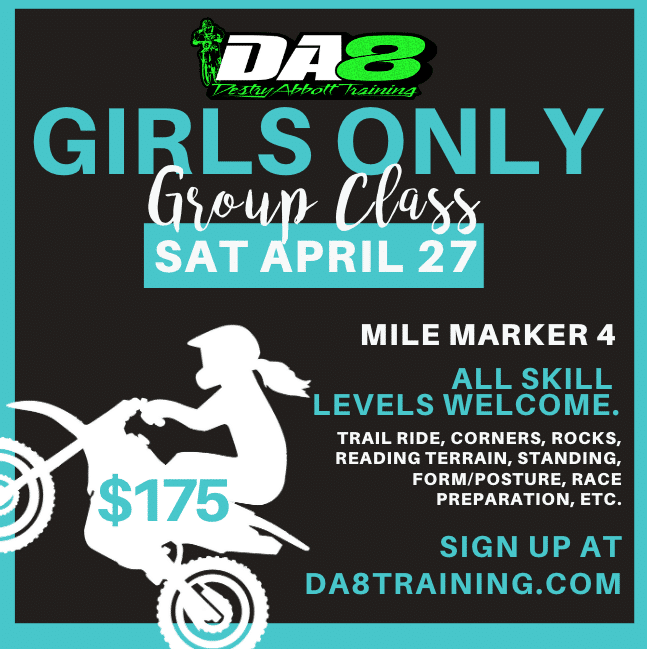 Destry Abbott is a busy man! He has a number of events coming up including a Woman’s riding clinic on April 27th. You can make it a family event! On Sunday, April 28th he’s at Arizona Cycle Park and on May 3rd he has a clinic in Reno, Nevada. You can register at DA8training.com. 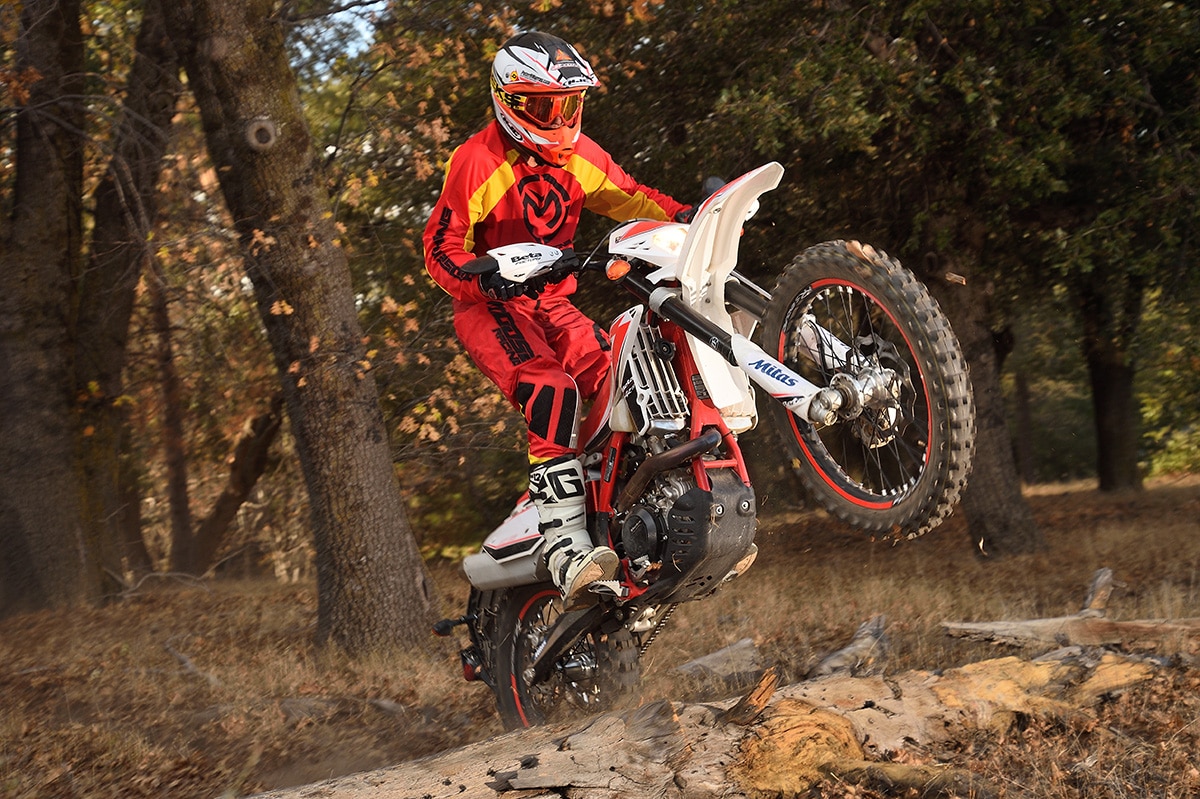 Thanks to sponsors of the Beta AMA National Dual Sport Series, participants who rode at any of the events in the 2018 series were entered automatically to win prizes from Beta, IMS Products, Kenda and Seat Concepts.

“My staff and I are very happy once again to make one lucky person an owner of a new Beta,” said Beta USA President Tim Pilg. “I hope that this year’s winner, Matteo, enjoys his new 500 RR-S! This is our 5th year as the title sponsor of the series and we couldn’t be happier for all of the past, present, and future winners.” 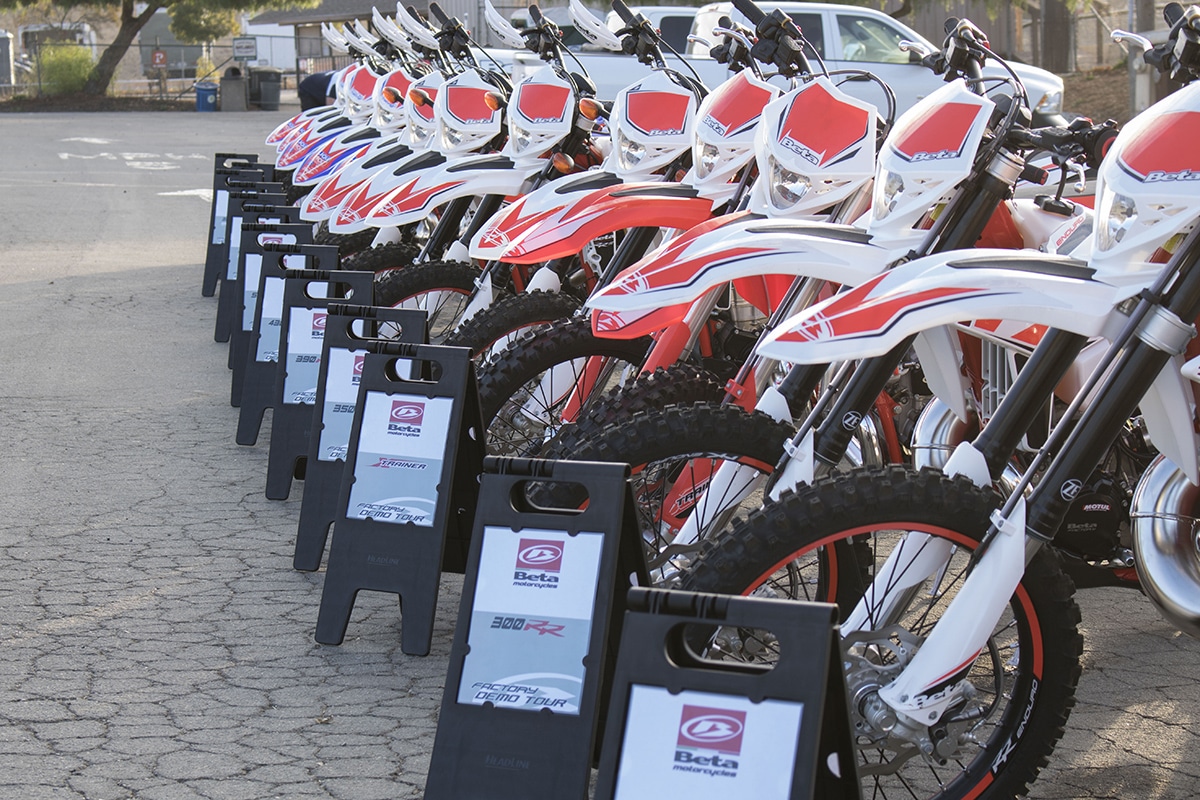 Beta is also putting a great deal of effort into its demo tours. You just show up and they let you ride one of their brand-new bikes. How cool is that? They have a few spots available at the next stop on the tour.
Location:
Sophia, West Virginia
Burning Rock Off-Road Park
Date:
Saturday, April 13th.
To sign up for a Beta Demo Tour, click here. 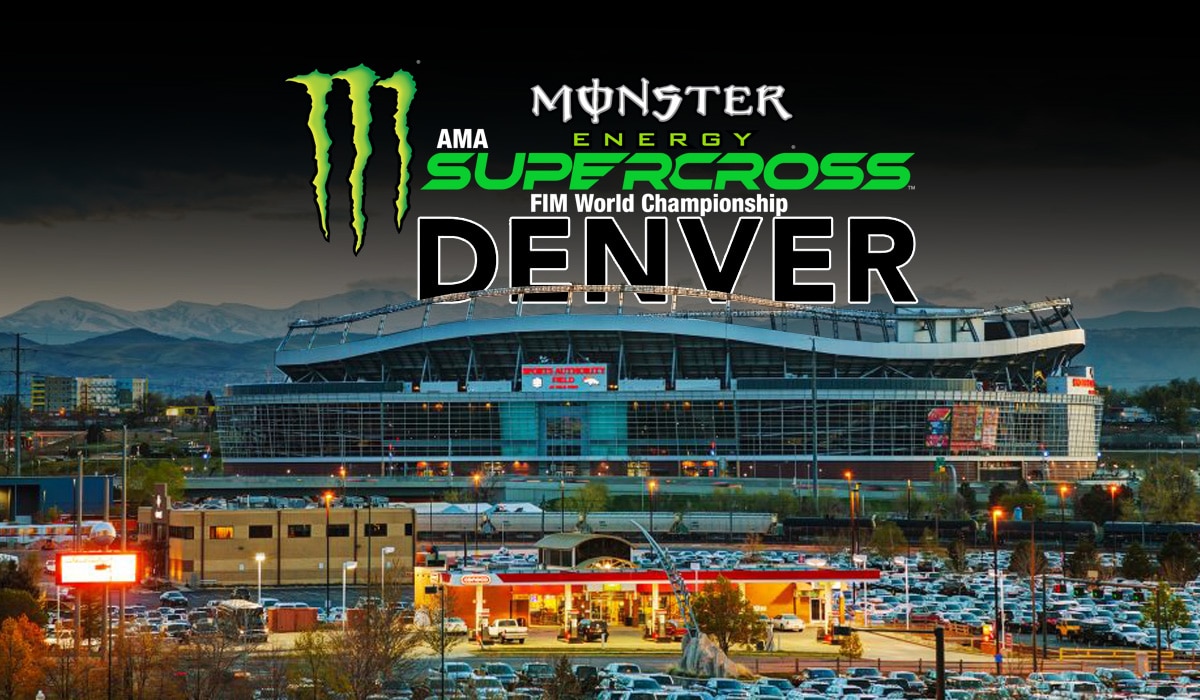 As always, there will be live results from AMA Supercross this weekend at dirtbikemagazine.com, starting with timed practice. In light of NBCSN scheduling changes due to NHL playoffs, the Denver Monster Energy Supercross race will begin one  hour earlier than previously scheduled. Opening ceremonies will now begin at 5 p.m. Mountain time, with the first heat races beginning at 5:30 .p.m. Doors to the general public will open at 11 a.m., at which time the Fan Fest and race qualifying will begin. The Denver Monster Energy Supercross race will air in its entirety on NBCSN from 5:30-8:30pm MT (7:30pm-10:30pm ET.)

BLAYNE THOMPSON AT THE NGPC

Have you ever grabbed a holeshot in the Pro class at a National Grand Prix Championship race? Neither have I. Blayne Thompson has. He did it again last weekend at 29 Palms, and this is what it looked like. His teammate Zach Bell spoils the fun around minute 2.

In case you missed it last week, here’s a recap of round 4 of the MXGP of Italy. Tim Gajser and Tony Cairoli have been amazing this year!