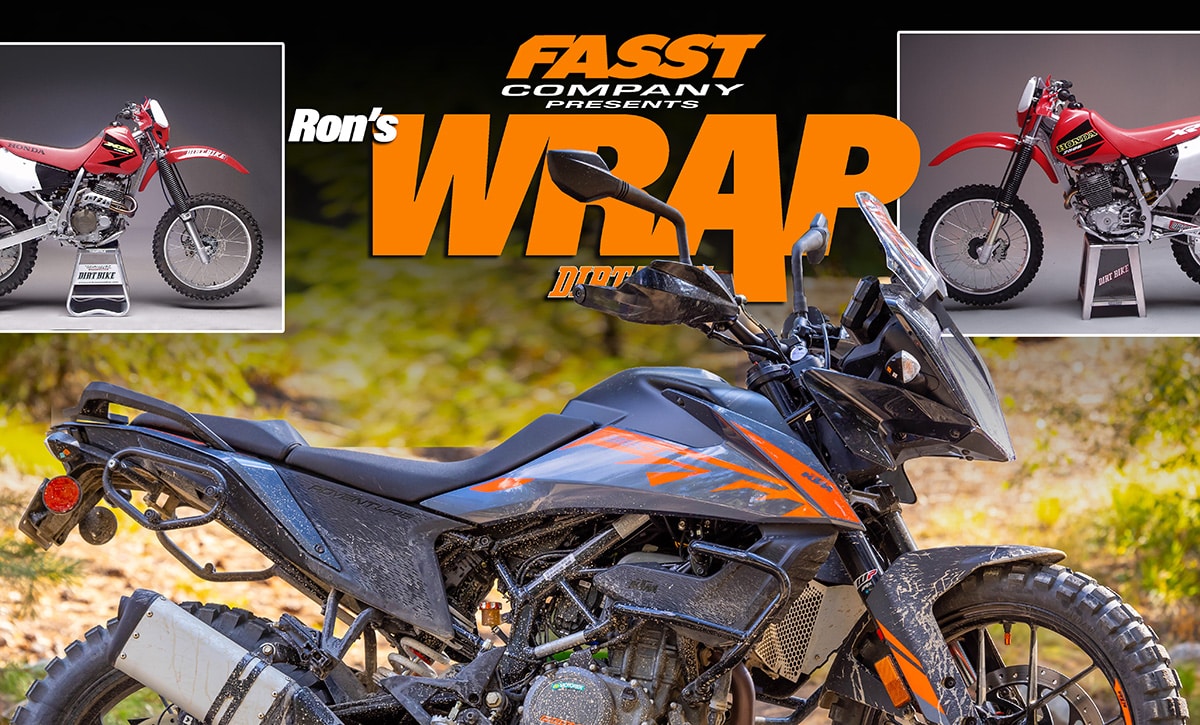 The KTM 390 Adventure is proof that you don’t need to be a retired CEO to participate in an Adventure Bike gathering. I spent last weekend riding one at the KTM Adventure Rider Rally in Tamarack, Idaho and had an absolute blast. The 390 is no 1290 Adventure. It’s a repurposed commuter bike with new bodywork and suspension. That’s the secret to its success, though, By not going all out with a massive new purpose-built adventure bike motor and chassis, the 390 Adventure comes in at $6799. That’s less than any dirt bike in the company’s line-up above the 85SX. I was riding with guys on $25,000 BMWs and Ducatis. I could go the same places, do the same thing and do it all pretty much as well.

The 390 was originally built in India with cheap transportation in mind. In its initial incarnation, it was called the 390 Duke, which sells for even less than the Adventure. To make it into an adventure bike, KTM gave it new bodywork and a different riding position. The motor is a DOHC, 373cc single with a 6-speed gearbox and a 10,000 rpm redline. It’s said to produce about 42 horsepower. The suspension, subframe, fuel tank, bodywork, instrumentation and rider positioning are all specifically for the Adventure model. The engineers moved the footpegs about 4 inches forward with new brackets. The suspension is what WP calls its Apex line. The fork has the compression-damping clicker in the left side and the rebound in the right. The shock is very basic with nothing other than a step-cam preload adjuster and a rebound clicker. It bolts directly to the swingarm sans linkage. The brakes are Bybre, which is an Indian subsidiary of Brembo. My bike was set up with a few aftermarket components. It had a tall one-piece seat, an Akrapovic exhaust and, most importantly, Conti TKC80 tires. 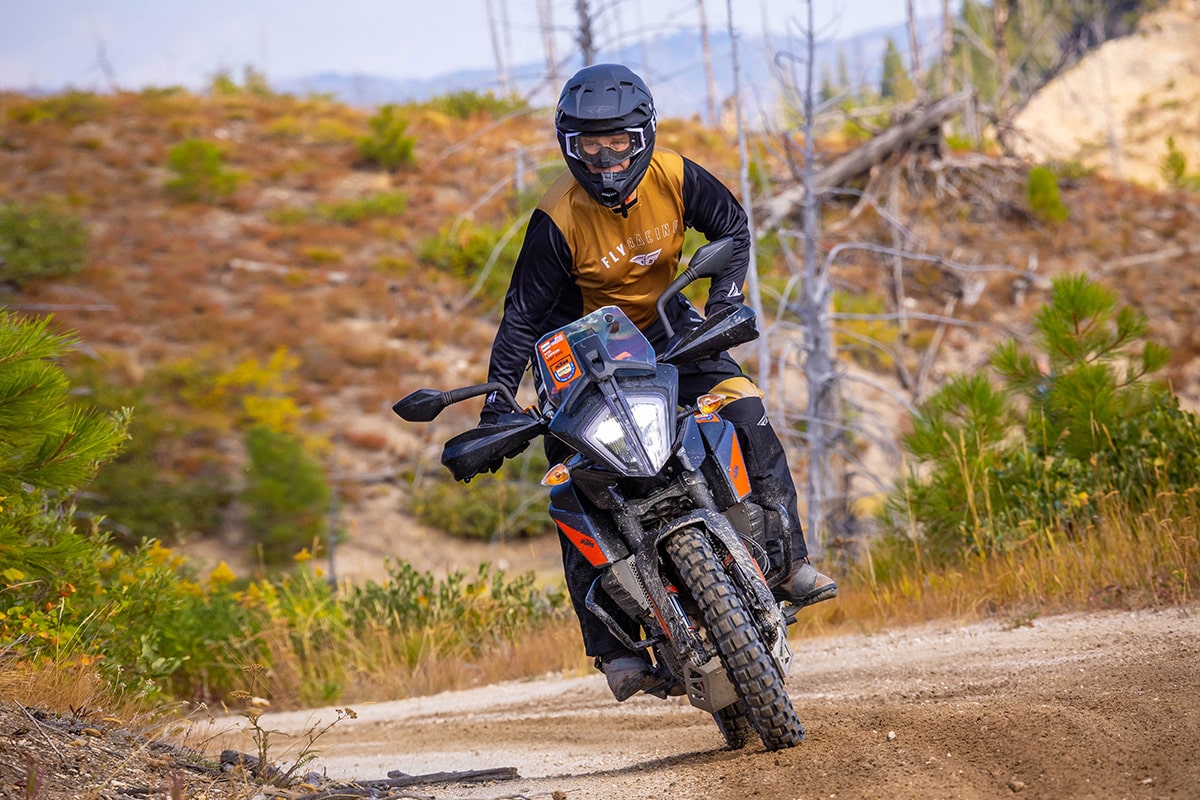 You have to be in the right frame of mind to properly enjoy the 390 Adventure. You don’t ride it like a dual-sport bike, and you don’t ride it like a full-size adventure bike. Dirt bike style calls for a foot out in the turns. That doesn’t feel right on the 390. Adventure bike style calls for standing up almost all the time. That’s not right on the 390 either. It doesn’t sound right, but the 390 responds best to a lazy, sit-down style. All the controls and the footpegs are angled and positioned for that. The motor makes plenty of power, but you have to rev it and shift frequently. When you do it right, you can keep up with bikies that make twice as much power and cost four times as much money. 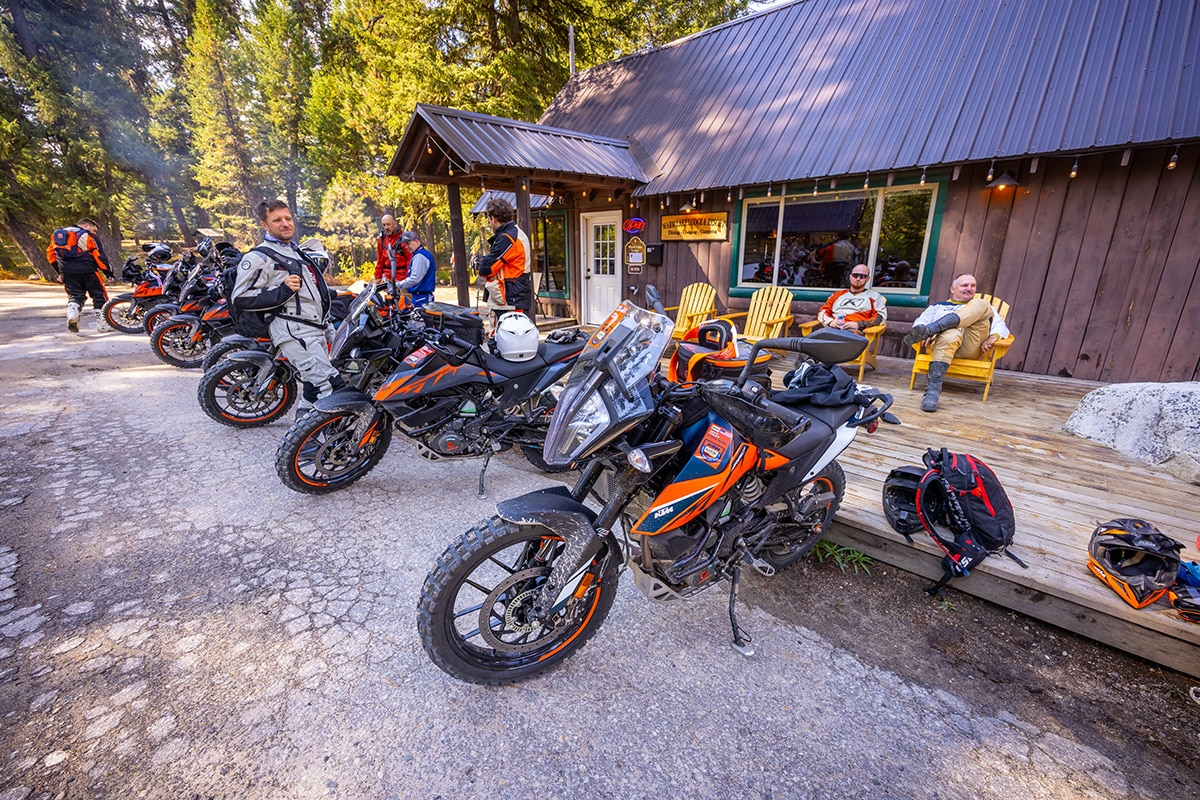 Like most adventure bikes, there are several electronic modes to choose from. The most critical one to address for off-road riding is MTC. It has to be turned off in the dirt. Don’t even try it otherwise. Off-road anti lock braking is also a good idea. I actually liked the power delivery best in the “Street” setting. The rally itself is so well organized and produced that it would be almost impossible not to have a good time. Quinn Cody is one of the men responsible for the route, which was divided into A, B and C skill levels. We did about 160 miles of dirt roads and two-trackers each day. It is designed to be GPS guided, but it was easy to ride in groups. Look for a story in the print edition of Dirt Bike 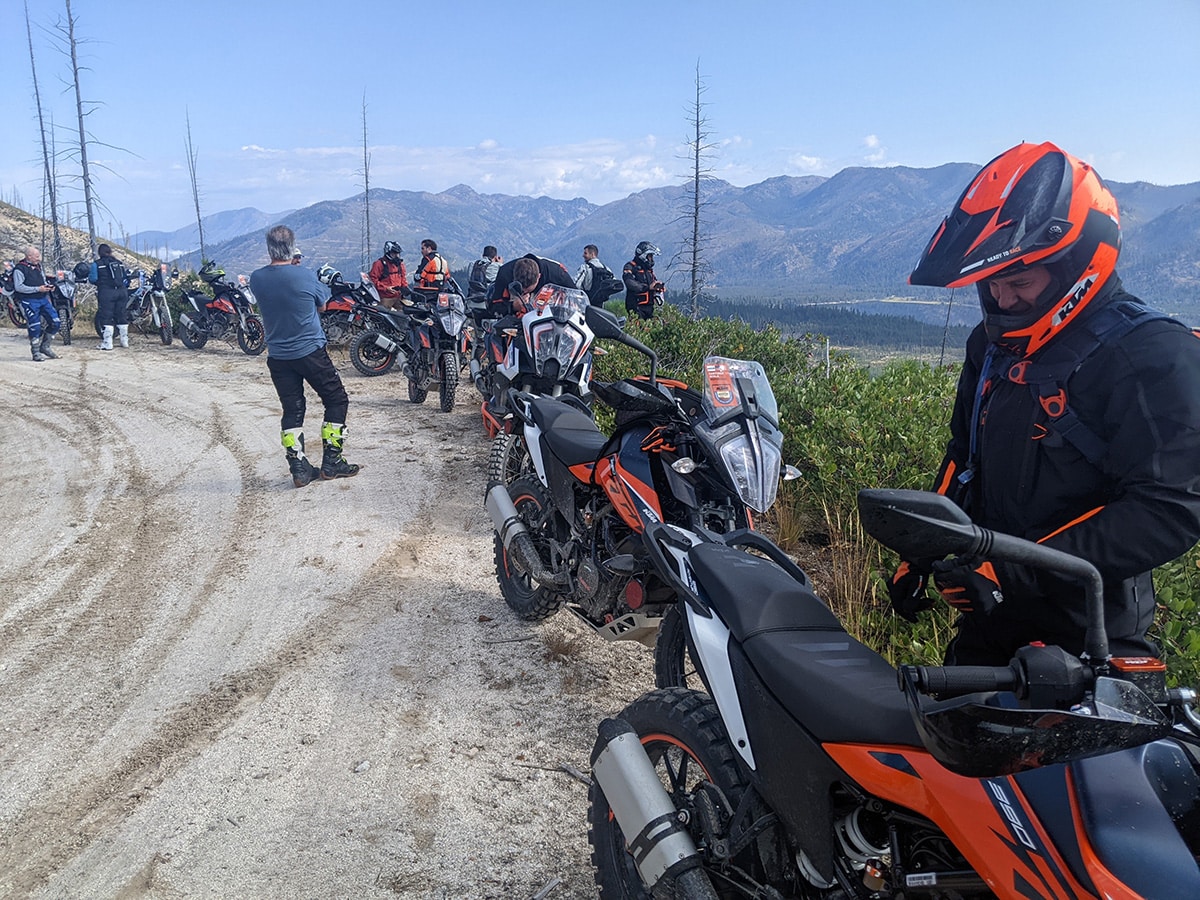 Digging through the Dirt Bike archives presented a story written by Scott Summers back in 1996. That was the year that Honda presented him with the new XR400R as well as a newly redesigned XR250R. We asked Scott to organize a three-bike shootout between all the XRs. At the time, everyone at Honda presumed he would switch to the XR400R.  Even internally, no one at Honda understood how Scott went so fast on the outdated XR600R at the time. They were shocked when he turned his nose up at the 400 and continued to ride and win on the 600. In that issue, Scott explained his reasoning. Basically, he used the mass of the torque of the 600 to his advantage. The 250, he felt was agile enough to make up for that, but the 400 was stuck in the middle without either advantage. At the time, we were big fans of the new 400, so we were devastated by his ruling. We will be publishing the story again in the print edition of Dirt Bike, so stay tuned. 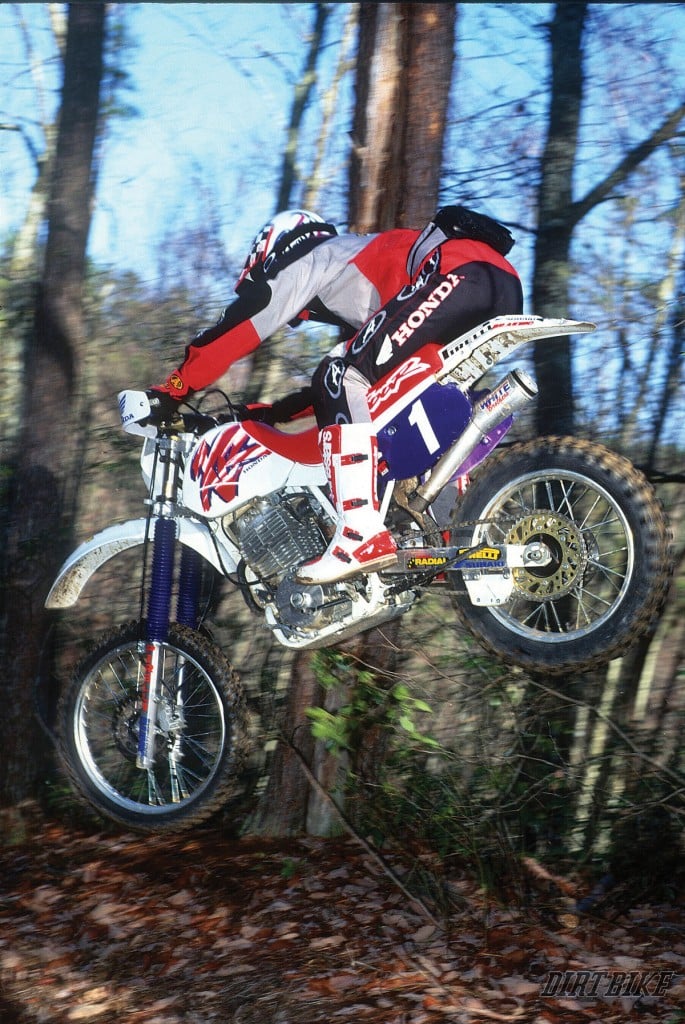 Although Brad Lackey never won the overall at the USGP at Carlsbad, he remained a fan favorite, frequently singled out by ABC’s Wide World of Sports as “the American on a quest for a World Championship…America’s first”. Brad would fulfill his dream and become the 1982 500cc World Champion and the only American to do so still 40 years later. He acknowledges the USGP media coverage and fan support he enjoyed, and ABC’s massive reach played a part in his legacy in the sport.

Monument funding will continue throughout 2022 and early 2023. Construction is projected to commence in the weeks following. A ribbon cutting ceremony is targeted for June 24, 2023, the 50th anniversary of the inaugural, points paying, FIM United States Grand Prix event hosted at Carlsbad Raceway. 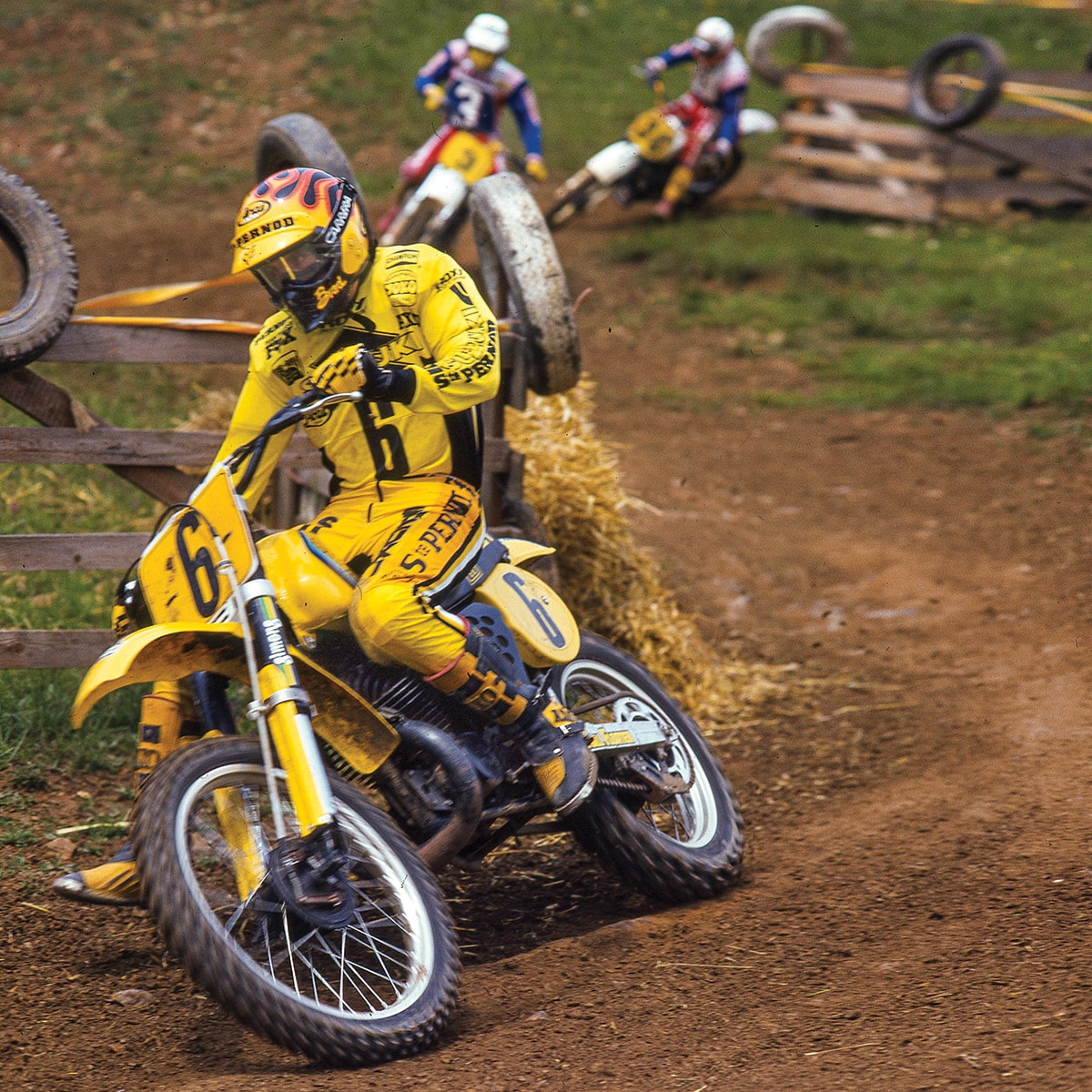 “Carlsbad Raceway holds a lot of special memories for me and millions of others who raced there, attended the races there, watched ABC Wide World of Sports or read about the USGP in magazines,” said Lackey. “It’s beyond fitting that Carlsbad Raceway should have a significant historical monument to remind everyone about the history of MX in the US and what an important part Carlsbad Raceway played. I’m reaching out to my friends, fellow competitors, and motorcycle companies here in the US and around the world to join Lori and I in building this monument in 2023. For us and so many existing donors and volunteers, this is beyond important and the time to act is right now. Unlike all the DNFs I had at Carlsbad over the years, help us not have one on this great project.”