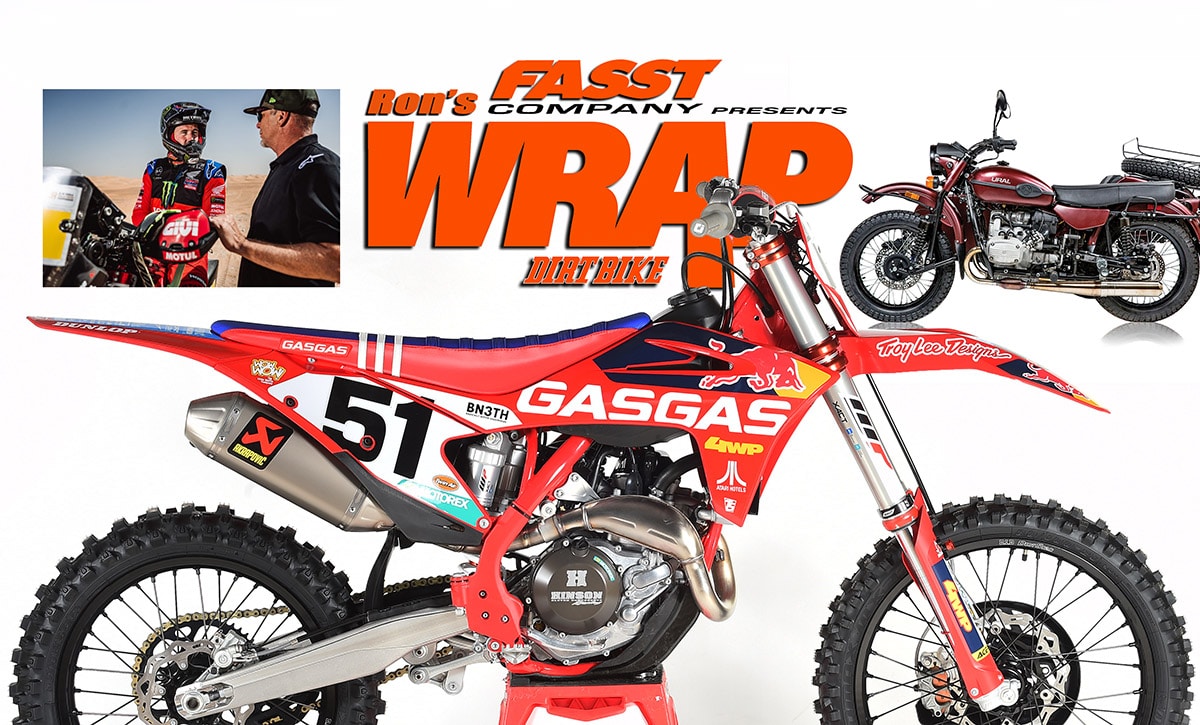 We now have a Troy Lee Designs GasGas MC450 in the Dirt Bike garage. This is the first GasGas Race Edition to be offered since KTM took controlling interest in the company two years ago. It is, quite obviously, a tribute to Justin Barcia. And, I gotta say, it is the most beautiful bike that has ever come out of Austria. Just like Barcia’s bike, it is based on the standard version of the MC450, not the new platform that the KTM Factory Edition and Husqvarna Rockstar Edition have. Those bikes might have the newer chassis, but they don’t have nearly as many upgrades as the GasGas. Here’s the list:

The standard GasGas MC450 has a number of price-lowering measures that allow it to undercut the KTM 450SX-F price. These include different bars, clamps, exhaust, tires and a missing map switch. None of those measures appear on the Troy Lee Edition. The firmer suspension settings are more or less the same as the standard KTM ones. 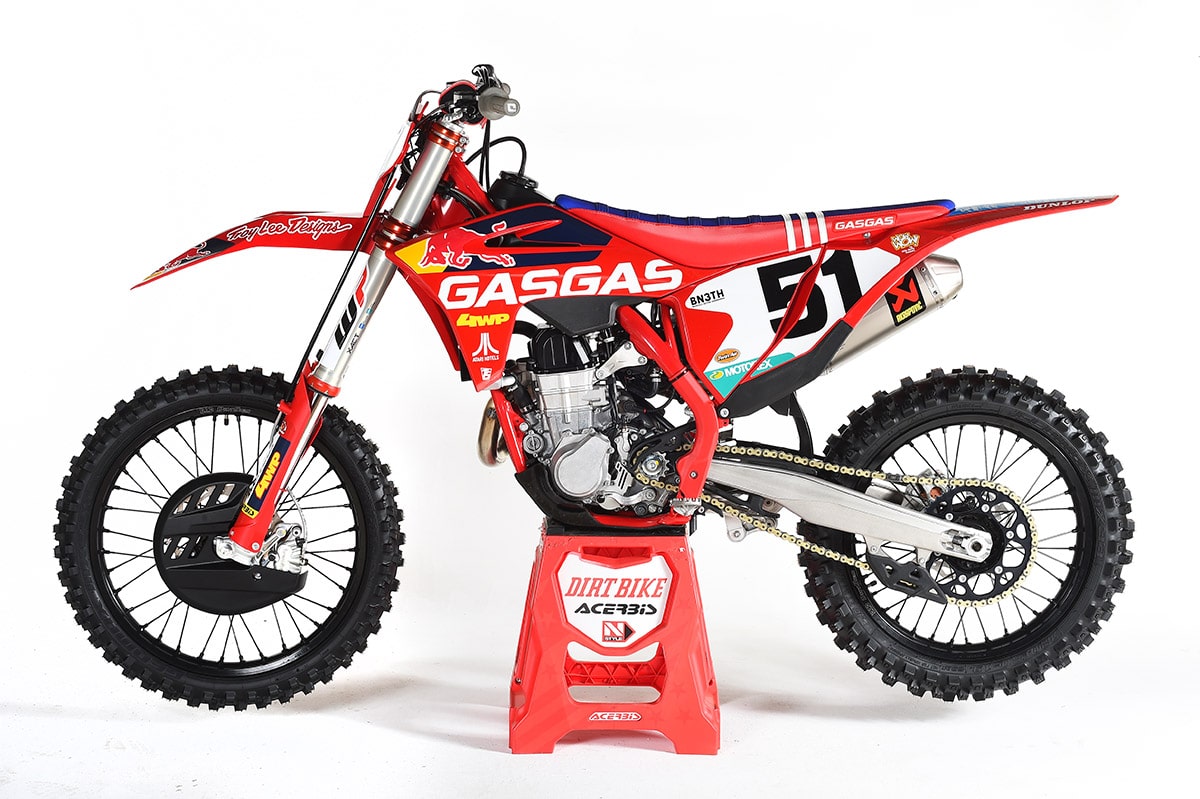 Right now, we are in love with this bike. We only have one day of riding it, but it’s become an instant favorite. It arrived right in the middle of intense testing with the KTM Factory Edition, which is still awaiting a full verdict. That bike is very new to us, and we are trying to come to terms with its many changes. The GasGas Troy Lee Edition is like an old friend. All the settings and riding techniques that we have learned from the KTM SX-F are in 0play here. In fact, the bike is more like a KTM than a GasGas. It is virtually a 2021 KTM 450SX-Factory Edition–but in red. It has more power than a standard GasGas MC450 from top to bottom, and it has better overall suspension. Some of the credit for the improved ride goes to the billet split triple clamps, but it overall has firmer settings, which are well suited to the bike. 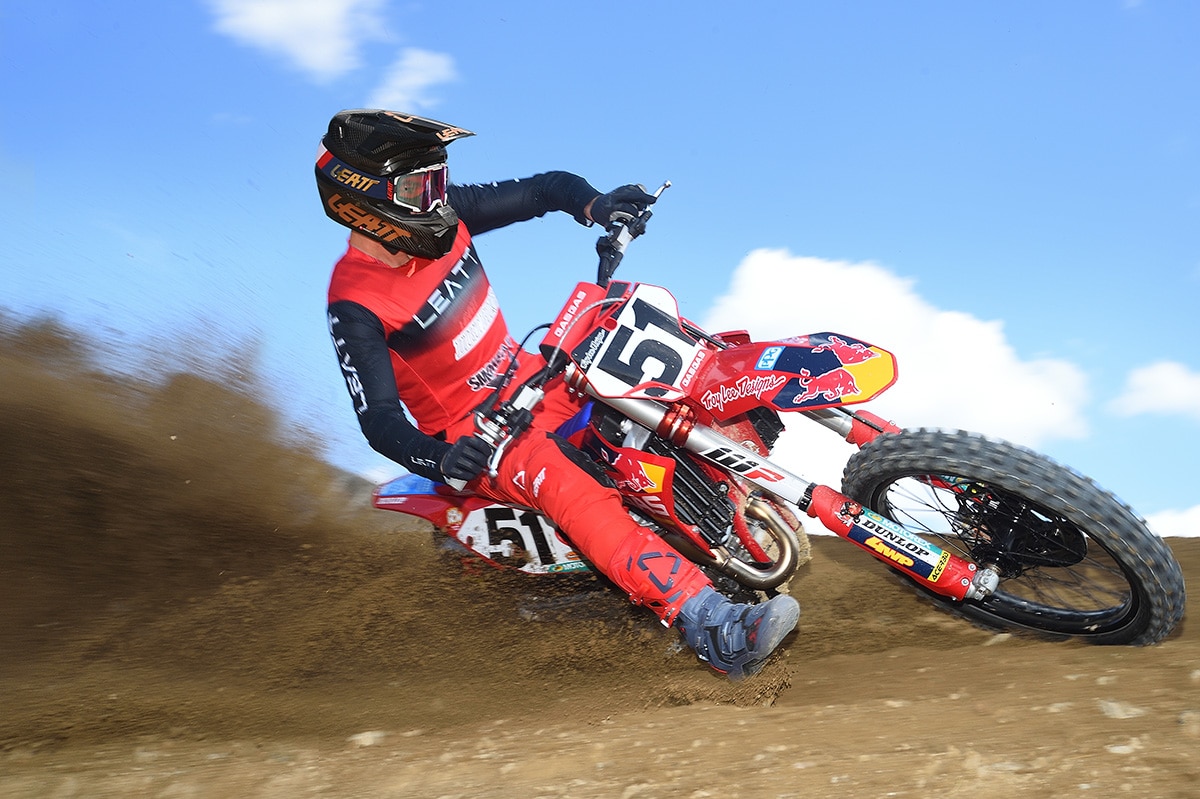 It’s no secret that we delayed our 2022 450 shootout so that we would have all the new factory editions to compare to the unchanged standard models. The Troy Lee Designs Edition is clearly in the running for the top spot. It’s going to be a fun shootout. 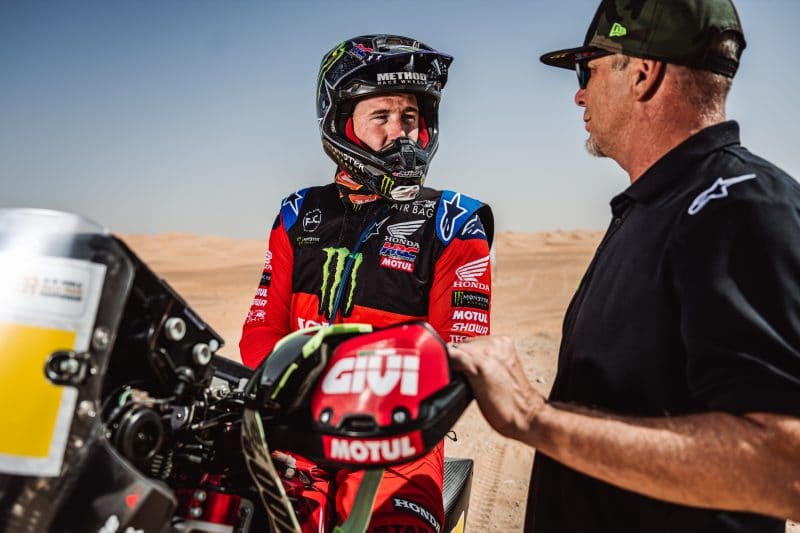 The Abu Dahbi Desert Challenge concluded today with a great showing from the Americans. Sam Sunderland of Great Britain was first with Ricky Brabec of the U.S. second. Skyler Howes was 10th and young Mason Klein was 11th, winning the Rally 2 class.

Ricky Brabec: “The final stage was great. The times were very close. We knew that it was going to be tough today to make up enough time in the overall standings. I did what I could to get onto the podium. I got ahead of my team-mate Pablo who also had a good push today. Overall it was a good rally. The team and the riders did a good job. The rally was tight all week with times going back and forth. Unfortunately, Sam was the one who stopped longer in the prologue and had the advantage from day one and today on day five. The rally is coming to those who stop the longest in the prologue. We knew it would be hard to beat Sam – he used to live out here. We did our best for the team and we’re looking forward to the next one. Thanks to all the team.”

HONDA OR NOT HONDA? 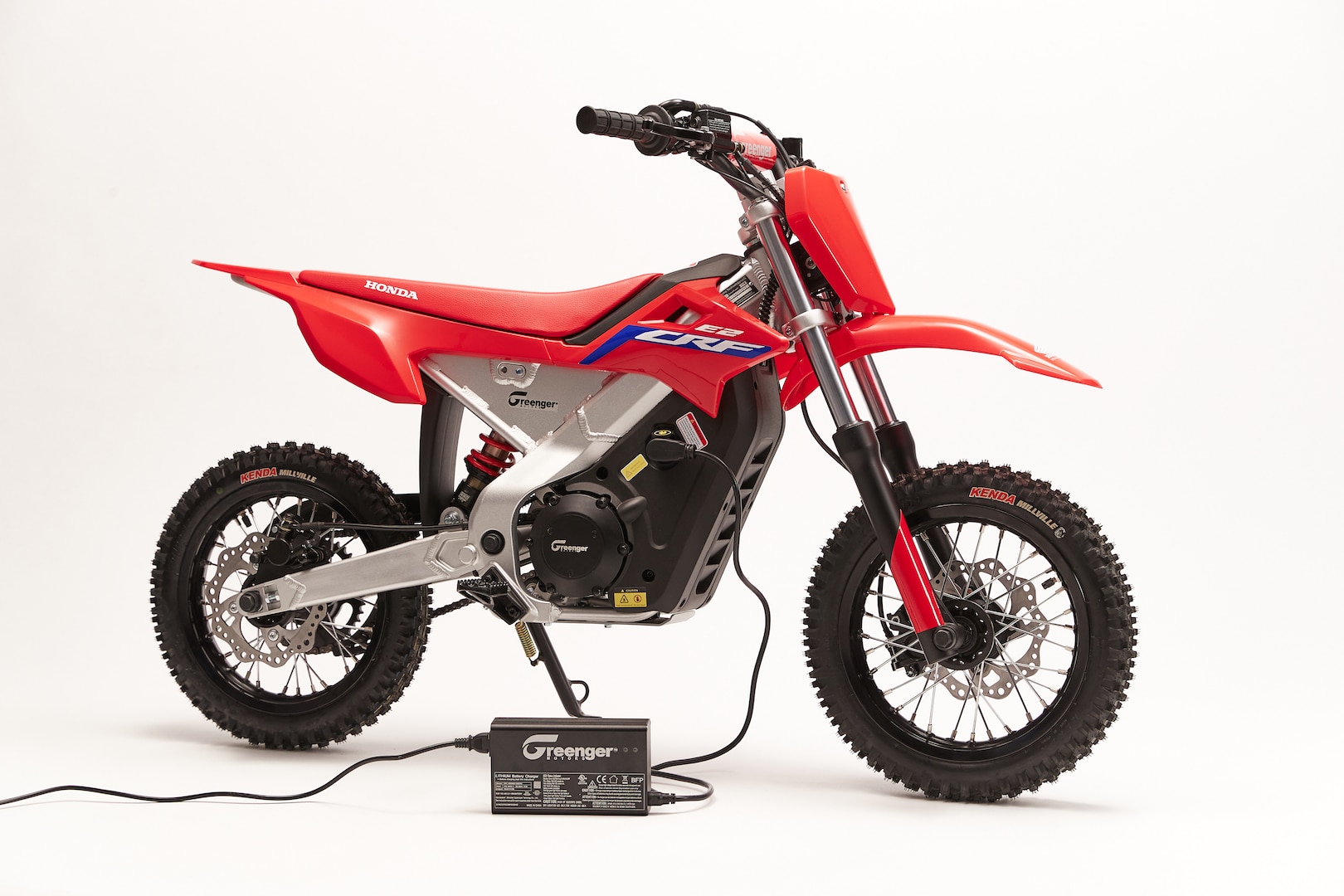 Apparently, there has been a little confusion about the recently announced Greenger electric mini. Despite the badging, it is not made by Honda in-house, but is rather a licensed product. Greenger CEO Doug Chapman had this to say:

It has been gratifying to see the interest in the Greenger Powersports CRF-E2 electric mini dirt bike since yesterday’s announcement. The reception on the part of the media and public has been nothing short of overwhelming, and we sincerely appreciate the enthusiastic response.

It is apparent from some of the content that confusion exists regarding the exact relationship between Greenger Powersports and Honda. To clarify, the CRF-E2 is an officially licensed product of American Honda and is not produced or manufactured by Honda. We would greatly appreciate it if you can ensure that this distinction is made clear in any future coverage. The team at Greenger Powersports is very proud to bring this new product to market, and of our relationship with American Honda. Therefore, it is important to us that the nature of that relationship be clear. 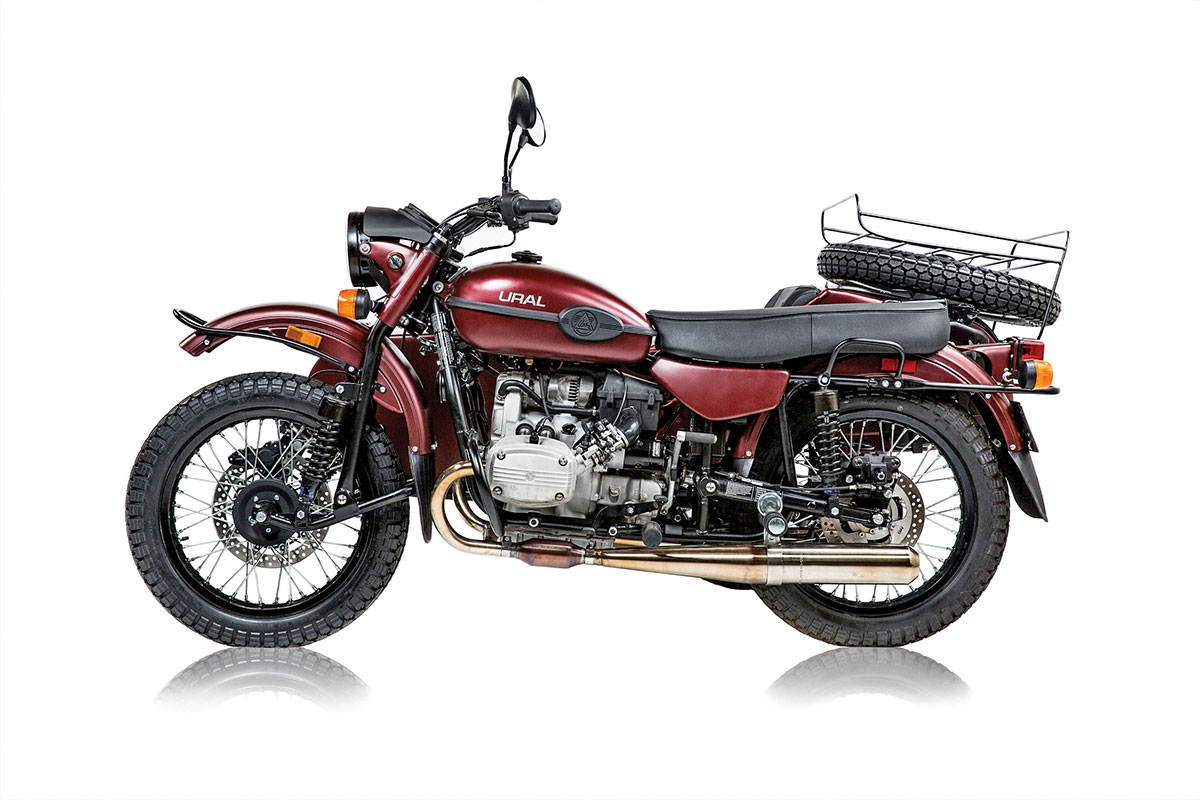 We are incredibly grateful for the support we’ve received over the course of these endlessly long days. Coming from the Ural community it wouldn’t have been any other way. We are a small and fiercely independent company building sidecar motorcycles in Siberia. Yet, our challenges are nothing in comparison to the devastation and human suffering caused by the war in Ukraine. It’s hard to find the words in this unfathomable reality; our hearts bleed for the victims and all we can repeat again and again is that this war must stop now.

As a business with responsibility to our customers we want to make sure we keep you in the loop and here’s the latest regarding operations:
Assembly of new motorcycles in Irbit is on hold at this moment.
There are several containers with motorcycles and parts currently in transit with arrivals in March (US bound) and in April-May (Australia, Japan).
We also have a number of containers that are built and waiting to be shipped. We are working on ocean export logistics, which is the main challenge right now.
Spare parts manufacturing at the factory remains fully operational. We are currently rearranging logistics for these parts. Outsourced parts and components from outside suppliers are being rerouted directly to our distribution companies.
Parts, warranty and tech support by distributors and dealers is uninterrupted and remains our highest priority.
Overall, the situation remains difficult to forecast. Regardless, we are fully committed to ensuring continuity of the brand and are prepared to take all steps necessary to support our customers and the product.

Be safe and stand by!

The Team at Ural

Ever wonder who is riding what in GNCC competition? This is a brand by-brand breakdown of the most recent GNCC in Florida. It seems that KTM is the overwhelming favorite, with Yamaha a distant second. Here’s how it looks:
Beta 17
Cobra 20
GASGAS 83
Honda 69
Husqvarna 147
Kawasaki 98
KTM 485
Sherco 9
Suzuki 7
TM 1
Yamaha 245
Other 2

YAMAHA’S BEYOND THE GATE #4