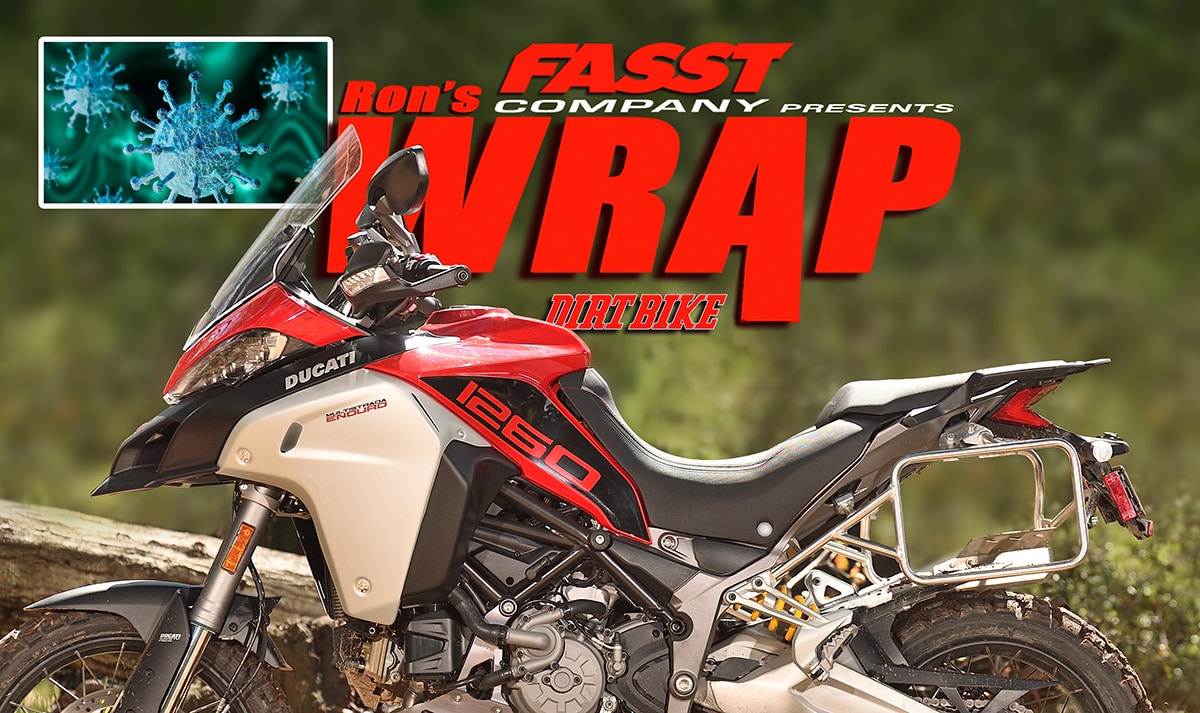 We have a 2020 Mulitstrada 1260 Enduro in the house and we’re so excited we’re acting silly. This is like a Ferrari with knobbies. The Multistrada has been around in one form or another for almost 18 years, but only in recent years has Ducati taken its off-road mission seriously. Multistrada literally translates to “many surfaces,” but the earlier version were only truly comfortable on one: pavement. Last year, the 1260 Enduro came out, and it had the most dirt technology of anything Ducati had ever produced. The heart of the bike is still the L-twin motor. The 2020 version is equipped with the 1262cc Testastretta motor which is rated at 158 horsepower. It’s a high-tech sportbike powerplant with Desmodromic Variable Timing. The peak power isn’t the main thrust, here. Ducati says that 85% of maximum torque is  available below 3500 rpm. What really makes this Multistrada more off-road worthy is its selection of ride modes.  Most manufacturers in this segment are dabbling with menu-driven electronic adjustments; some for power output, some for suspension and so an. Ducati has addressed everything in its menus. You choose Sport, Urban, Touring or Enduro. That adjusts traction control, engine output, ABS, suspension (both damping and preload), wheelie control and a few other things we haven’t quite figured out. You can go deeper into the settings to customize any of these functions individually.

The cast wheels of the more street-oriented Ducati models are replaced with spoked 19’’ front and 17’’ rear wheels for the Enduro version. And the tank is much larger, holding almost 8 gallons. The range should approach 300 miles. The suspension is much beefier as well. The Sachs fork and shock produce 7.3 inches of travel. This is actually reduced compared to the Multistrada 1200 we tested three years ago, and the seat height is also down slightly. The bike still has an adjustable rear brake lever. When you flip over the tip, the pedal is higher so that it’s more accessible from the standing position. You can also remove the footpeg rubbers to reveal full-sized dirt-bike  pegs with teeth and everything. It’s this kind of detailing that lets us know that Ducati really has tested and developed the bike off-road. 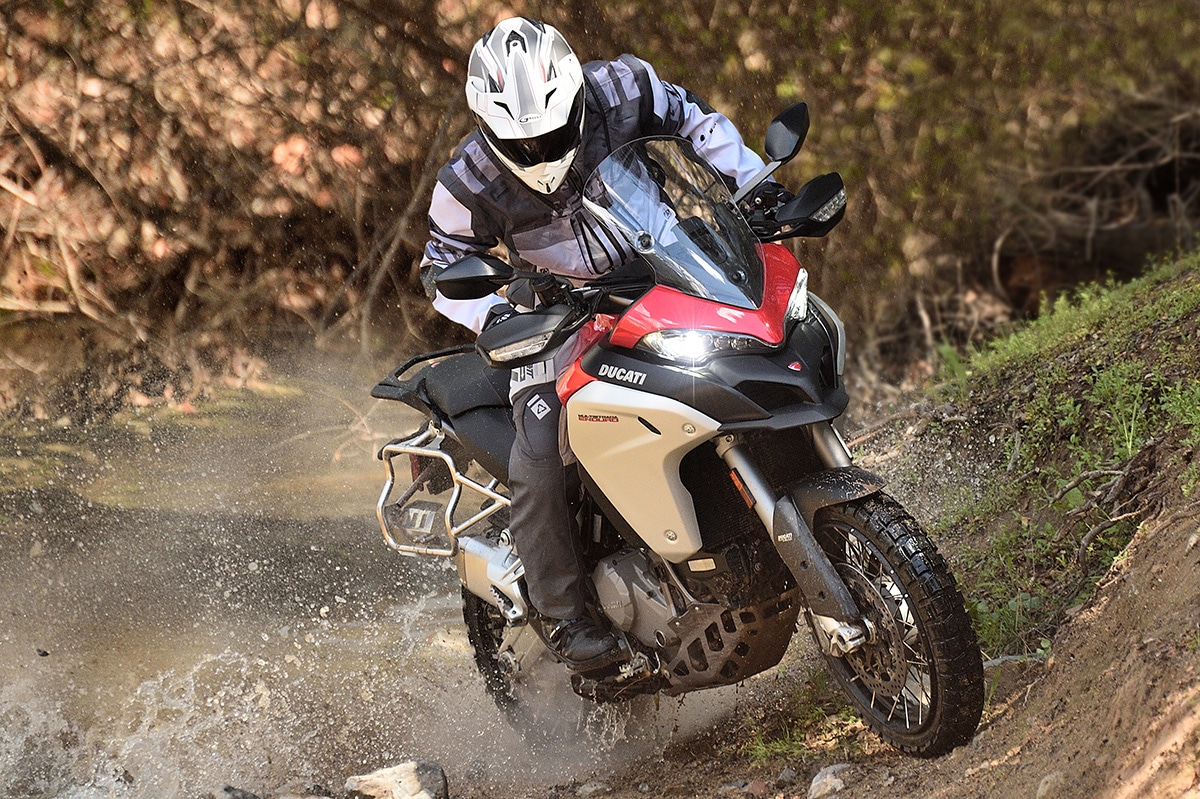 Like any adventure bike, there are dozens of aspects about the motorcycle to learn, explore and test. We dabbled with the different levels of ABS and traction control. These are much better than earlier versions from Ducati, and for casual rides on dirt roads, the default settings provided by enduro mode are fine. If you’re feeling a little sparky, though (and know what you’re doing), you’ll probably want to disable both ABS and TC for dirt rides. They still don’t provide as much control as a skilled off-road rider can manage on his own.  The one default setting that’s perfect is the Enduro power setting. This puts the output around 100 horsepower, which is great for off-road. In case you don’t already know, 158 horsepower is a lot. When you have enough room and enough traction, nothing is more fun than twisting the throttle on the 1260 and trying not to swallow your tongue. For real riding on a dirt road, though, the lower setting is still fun and much more practical. As far as overall handling, the Multitrada is perfectly manageable when it’s equipped with DOT knobbies. Our test bike came with Pirelli Scorpion Rally tires, which were excellent. When you ride a big bike like the Multi in the dirt, it’s best to stay standing all the time. The seat is located behind a big fuel tank, so it places the rider’s weight too far back. It’s also very low, which is great for those times when you have to put a foot down, but it makes it difficult to go from seated to standing in a hurry. We’ll have the Ducati for a couple of weeks and a full test will appear in the June, 2020 print edition of Dirt Bike. 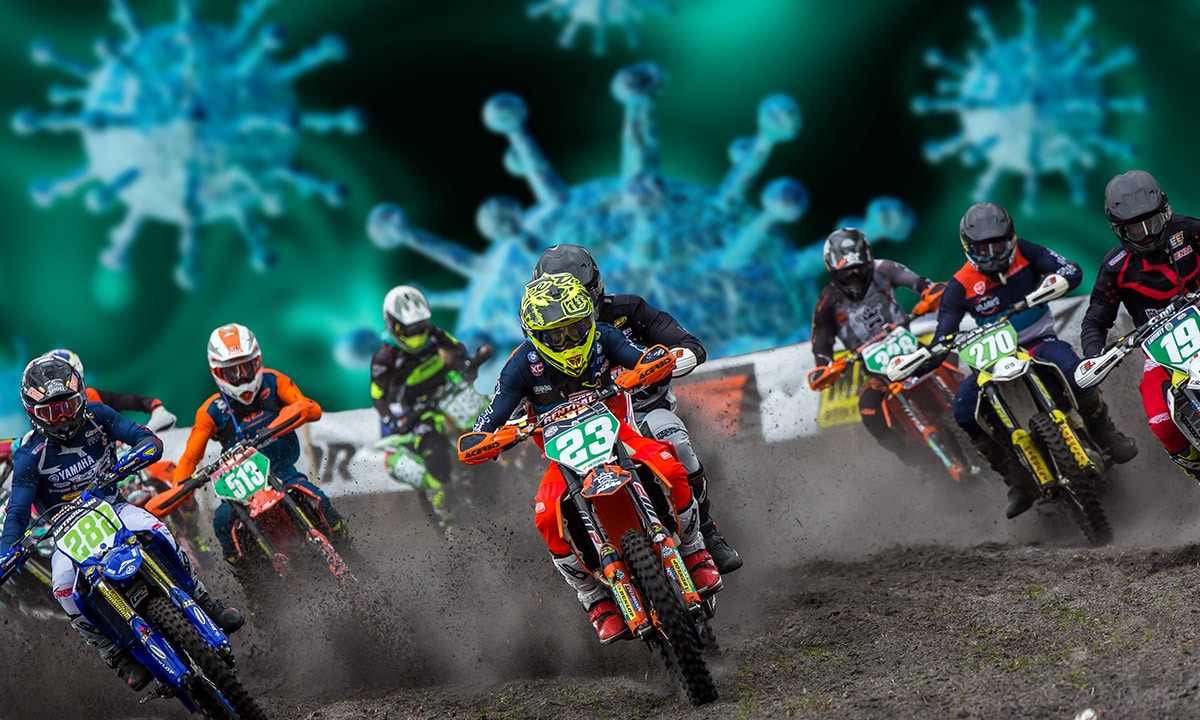 Okay, it’s time to take this Coronavirus thing seriously. Indy and Seattle Supercrosses have been canceled amid concerns of the Covid 19 virus, and a number of European events have been postponed. At this point, the rest of the Supercross season is in jeopardy. Click the image above to see what events have been canceled, what events have been postponed and what ones are unaffected. To see Dr. John Bodner discuss the Coronavirus with Jeff Emig, click here. By the way, in case you’re wondering how to spell canceled, it’s with one L here in America. Cancelled is British. I had to look it up.

MORE TIME ON THE KTM 500EXC 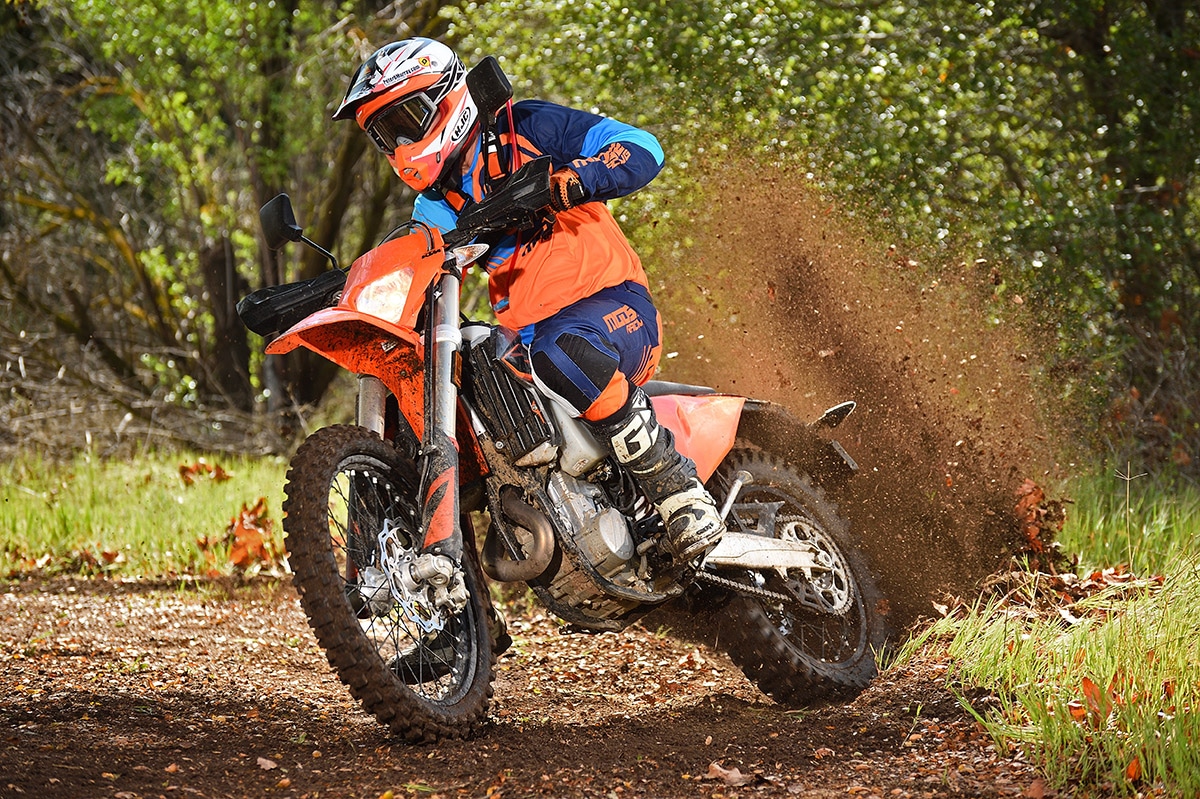 Last week I included a quick report on the KTM 500EXC dual-sport. This week I love it even more. What happened? It rained here in So Cal. That makes any bike handle better. Pete Murray and I went out riding between storms and shot some more photos. That’s what makes it part of my work. Before the next month of rainstorms has passed, I will have thousands of KTM 500EXC photos. 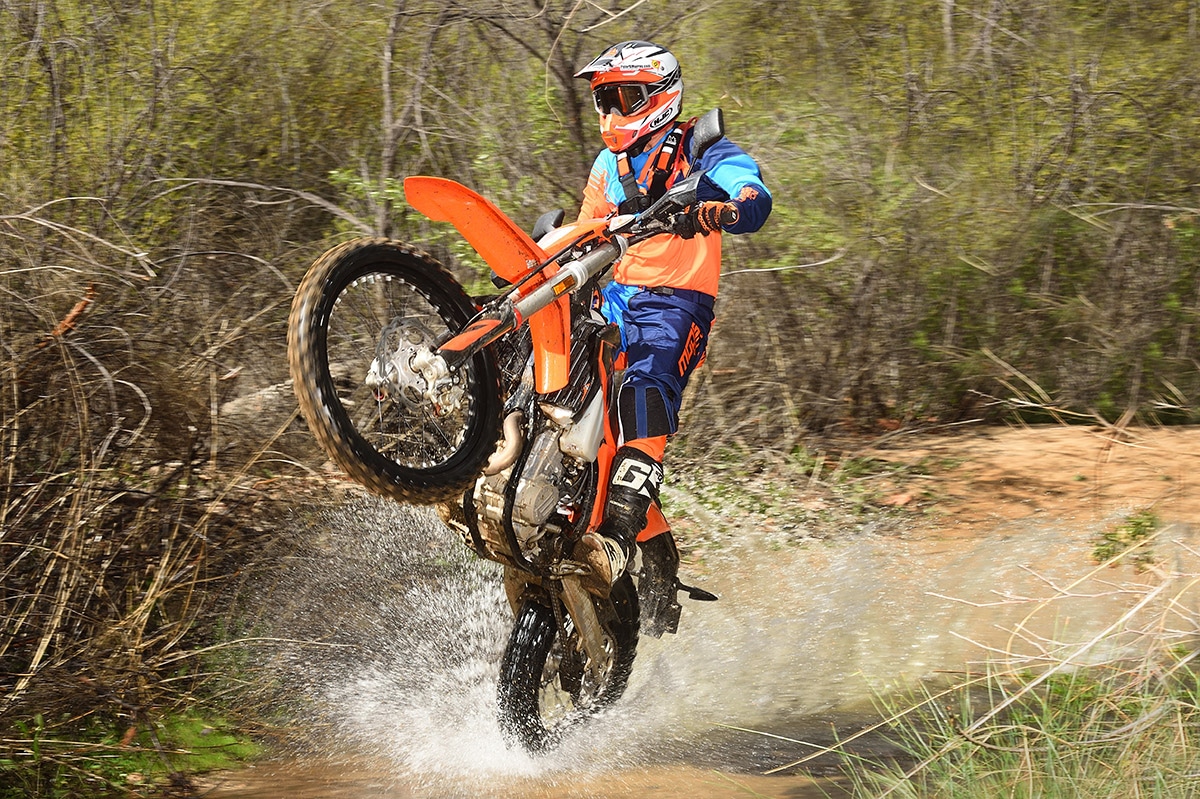 Our video man Travis Fant did double duty in Florida this week, covering Supercross as well as the Wild Boar GNCC. While he was there, he wandered through the pits to see who is riding what. You see more diversity than ever in off-road racing. 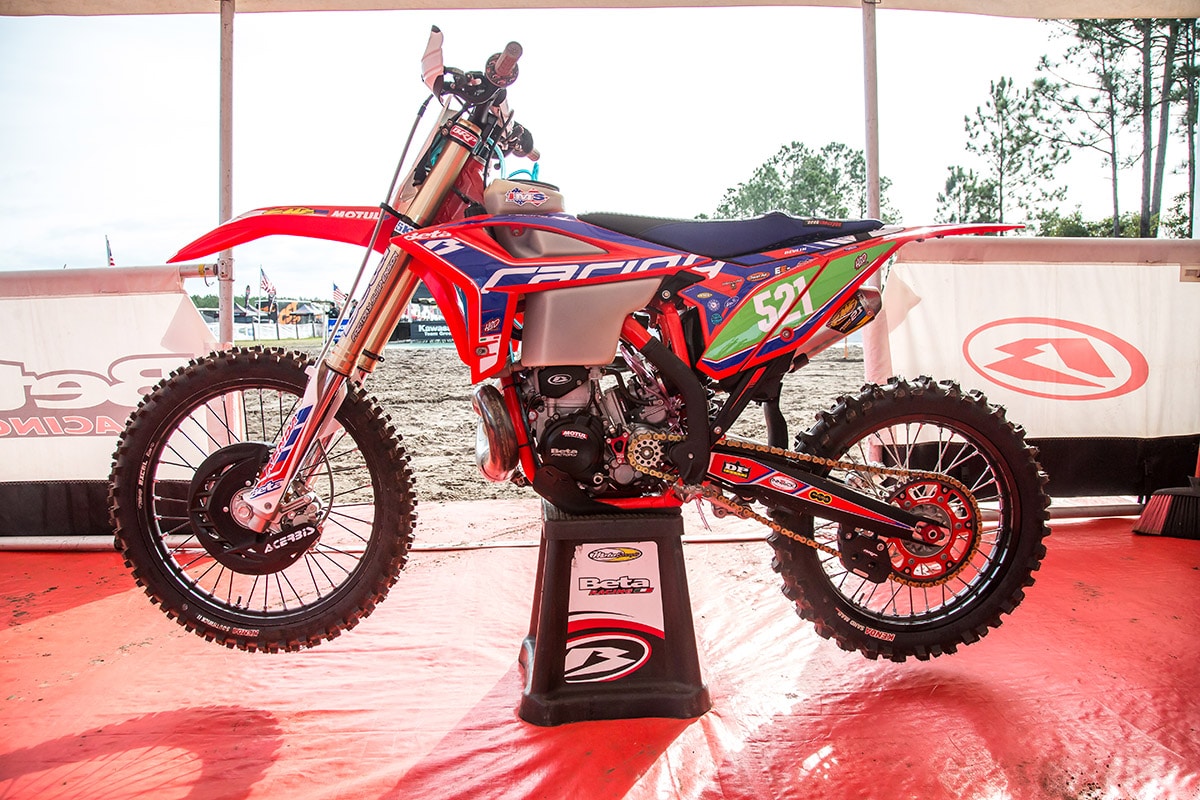 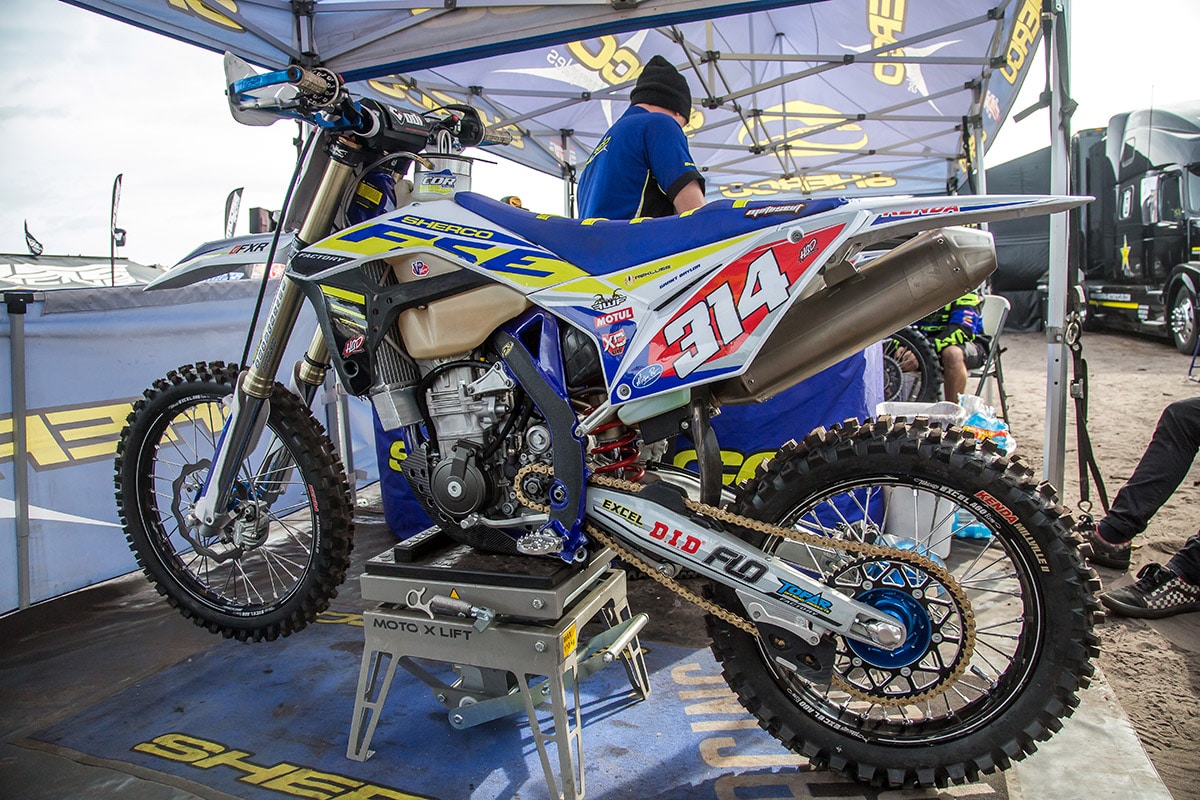 Grant Baylor showed up in Florida riding Sherco’s Big Guy–the 450 Factory. This is a bit of a surprise. All of Sherco’s World enduro success has come on either the 250 four-stroke or the 300 four-stroke, while the extreme enduro guys all ride the two-strokes. 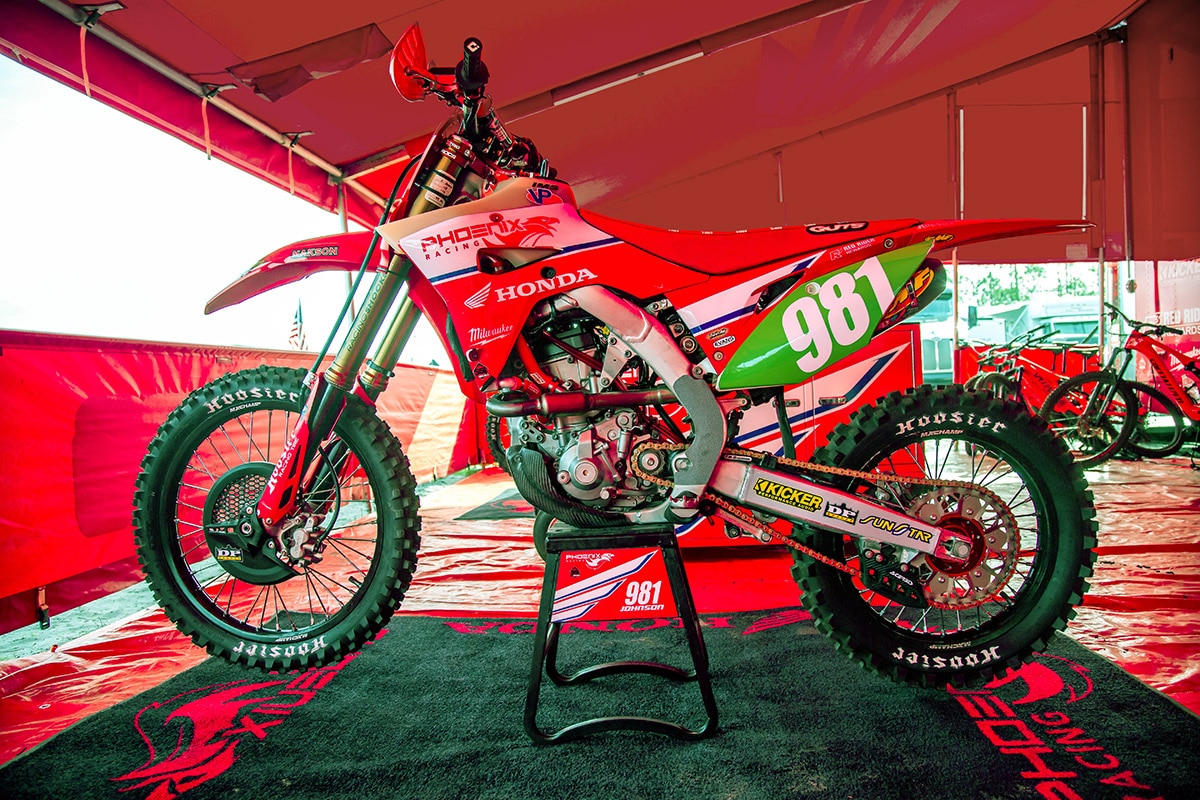 Jonathan Johnson just missed the podium in round one of the GNCC XC2 class. He’s on the Phoenix Honda team, which has had spectacular success in Arenacross. 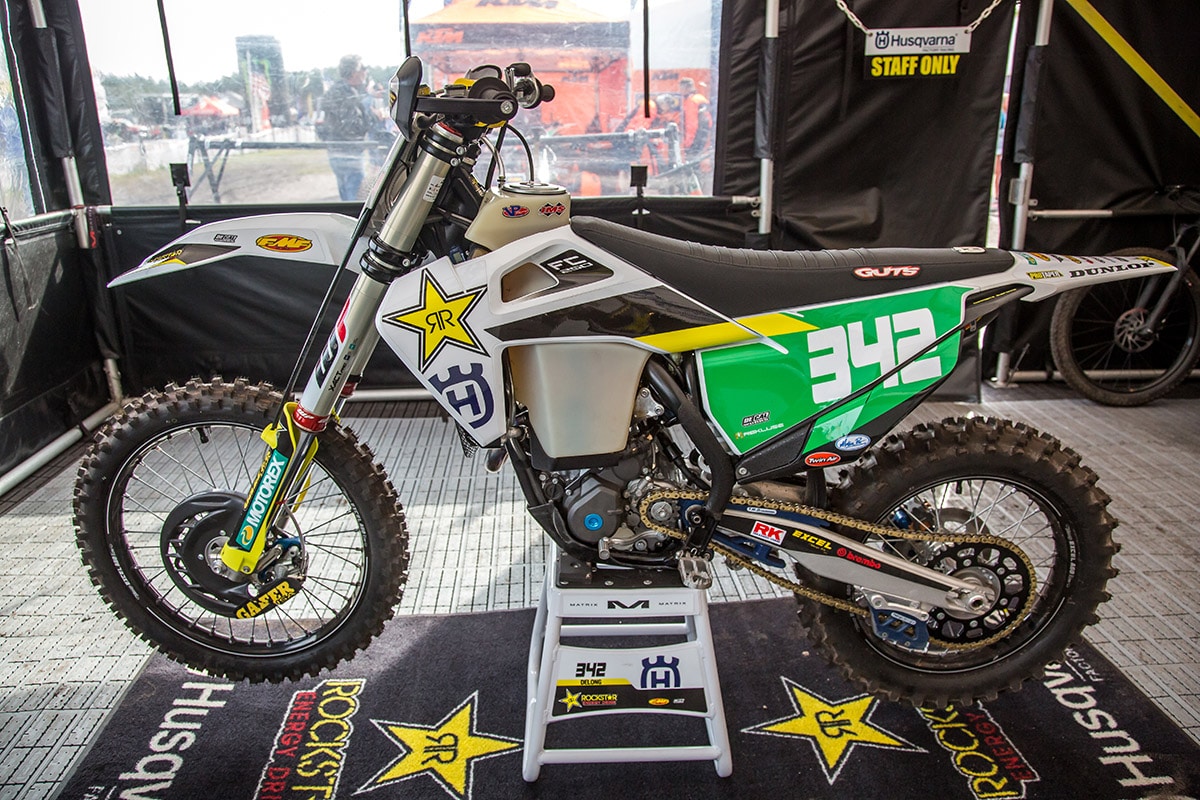 Craig DeLong is Rockstar Factory Husqvarna’s newest acquisition, riding in the XC2 class. Husqvarna hasn’t shown much interest in that class in the past because the company doesn’t offer a 250cc off-road four-stroke. Craig rode the motocross version of the bike to a podium finish. 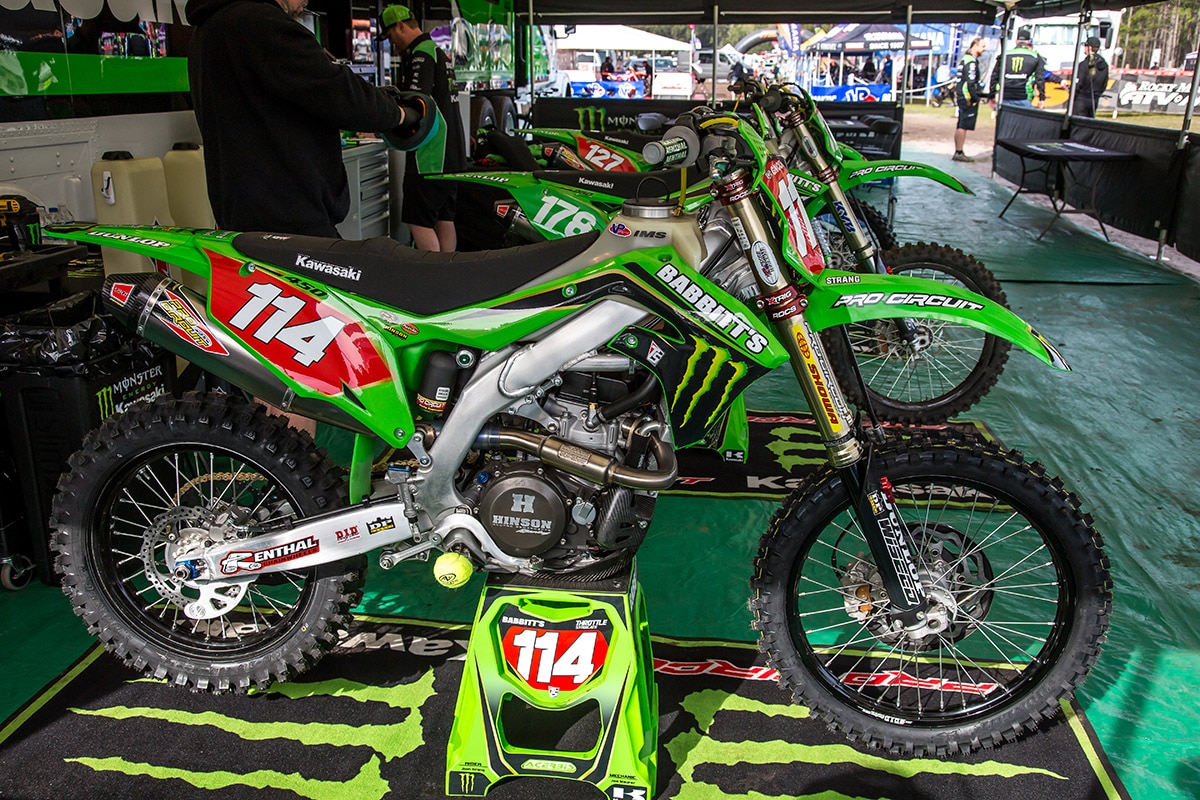 Josh Strang is riding better than ever and apparently loves his Babbitt’s Kawasaki KX450. He was second place overall at the Wild Boar. 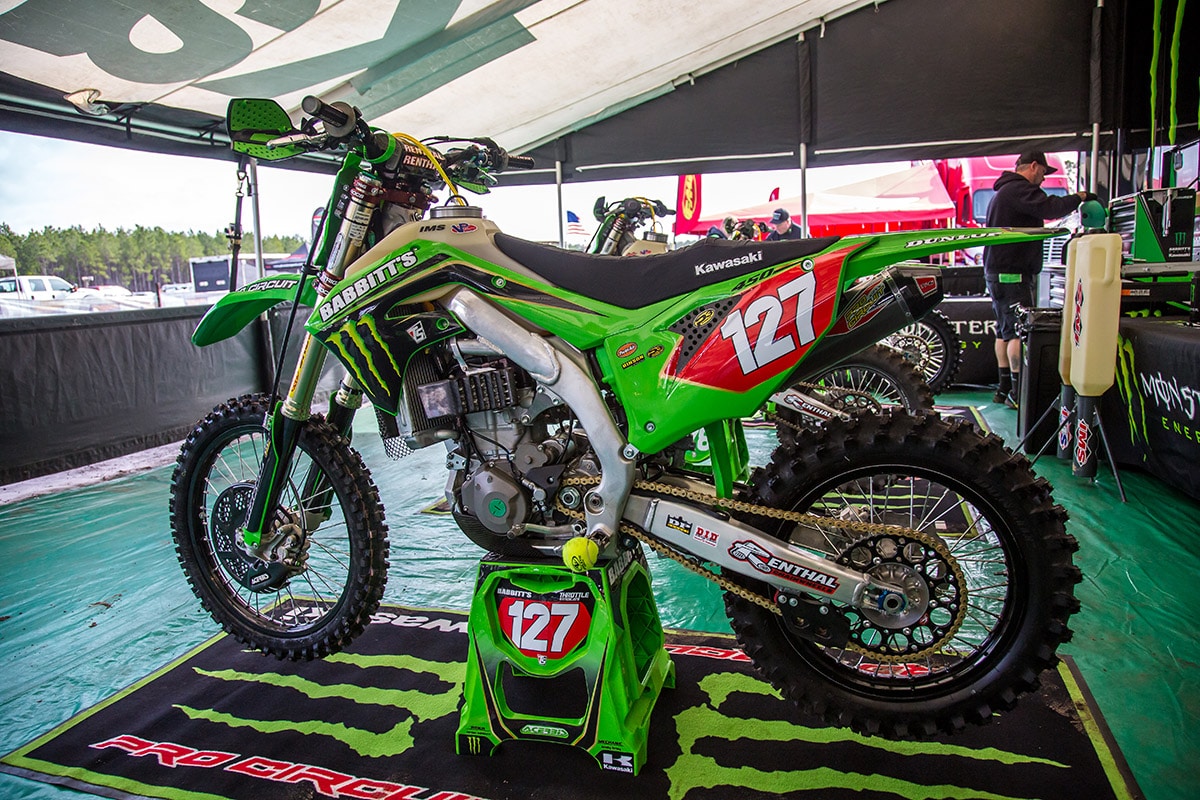 Jordan Ashburn is another GNCC veteran who is running back up front after swtiching to the Kawasaki KX450. 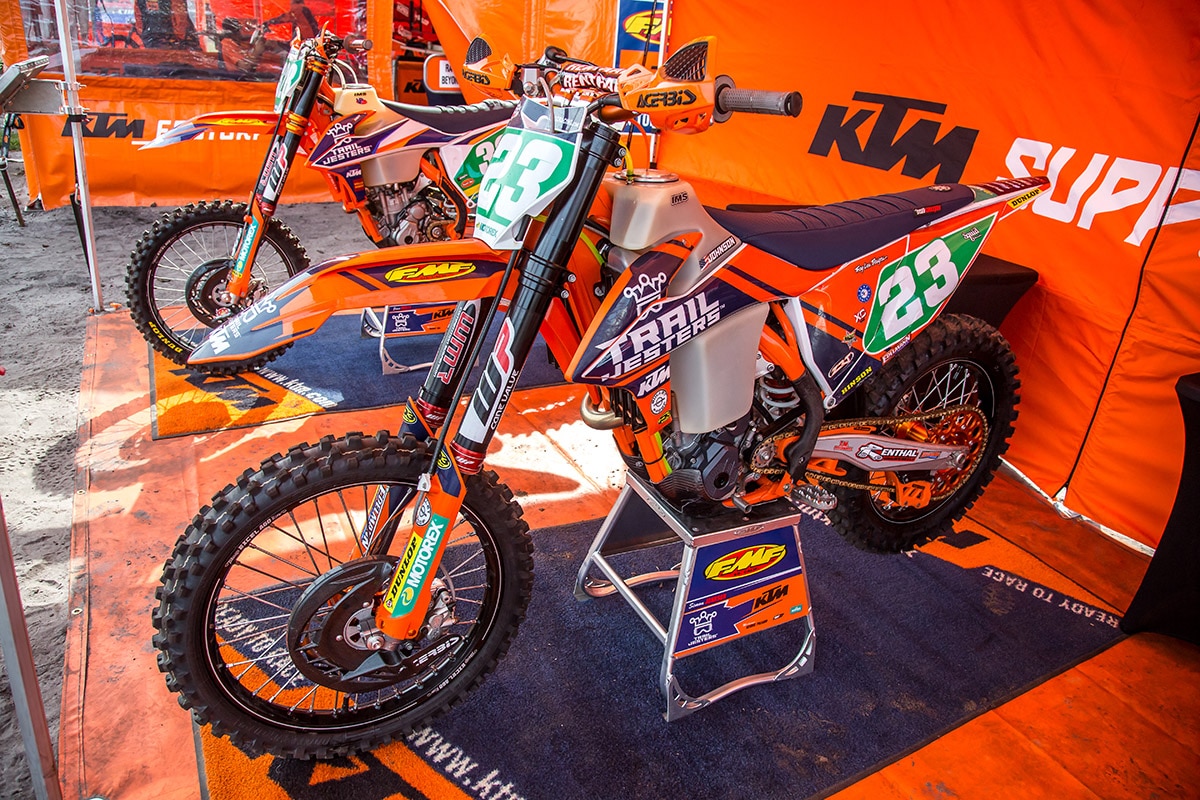 Simon Johnson is a member of the Trail Jesters in the XC2 class. These guys always seem to find the talent in the New England area.

COLTON HAAKER AND THE TE300i

If Colton Haaker is anything, he’s good to his sponsors. He put together a fun video that is, basically, a commercial for the Husqvarna TE300i and TPI fuel injection. I like it.