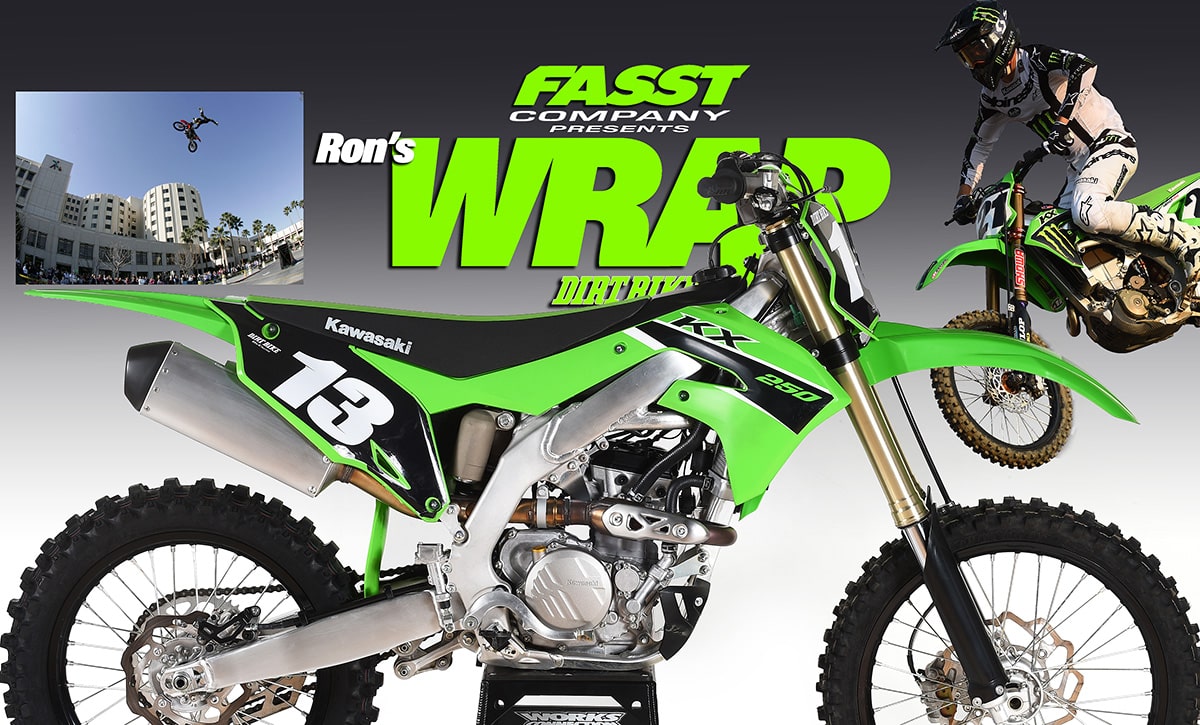 The 2023 Kawasaki KX250 snuck in under the radar. When we saw the initial press release, it looked like the bike had no changes. It turns out to have a long list of very important redesigns. They include: 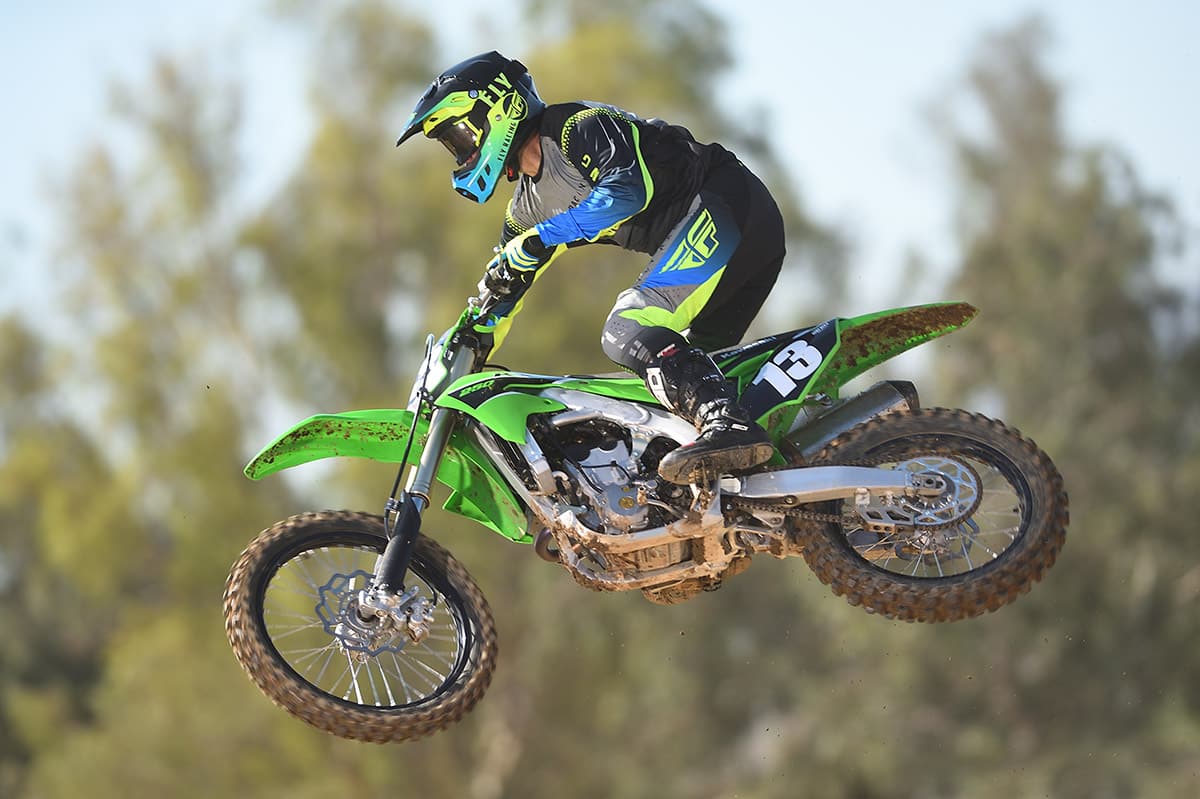 A new head with smaller valves, which are set at a different pitch.
The upstream injector is relocated from the top to the bottom of the air intake.
The intake duct is straighter.
The flywheel rotor is heavier
The headpipe is longer.
New mapping.
First and second gear ratios are taller, so the bike is set up to go faster and shift later in each of those gears.

On the chassis side:
Larger rear tire (110/90-19)
Slightly different footpeg location.
Aluminum footpeg bracket.
More compression damping in the KYB fork.
Some things are the same, including the coupler-based mapping changes. The footpegs still feature two options for mounting height, which is a feature we love. 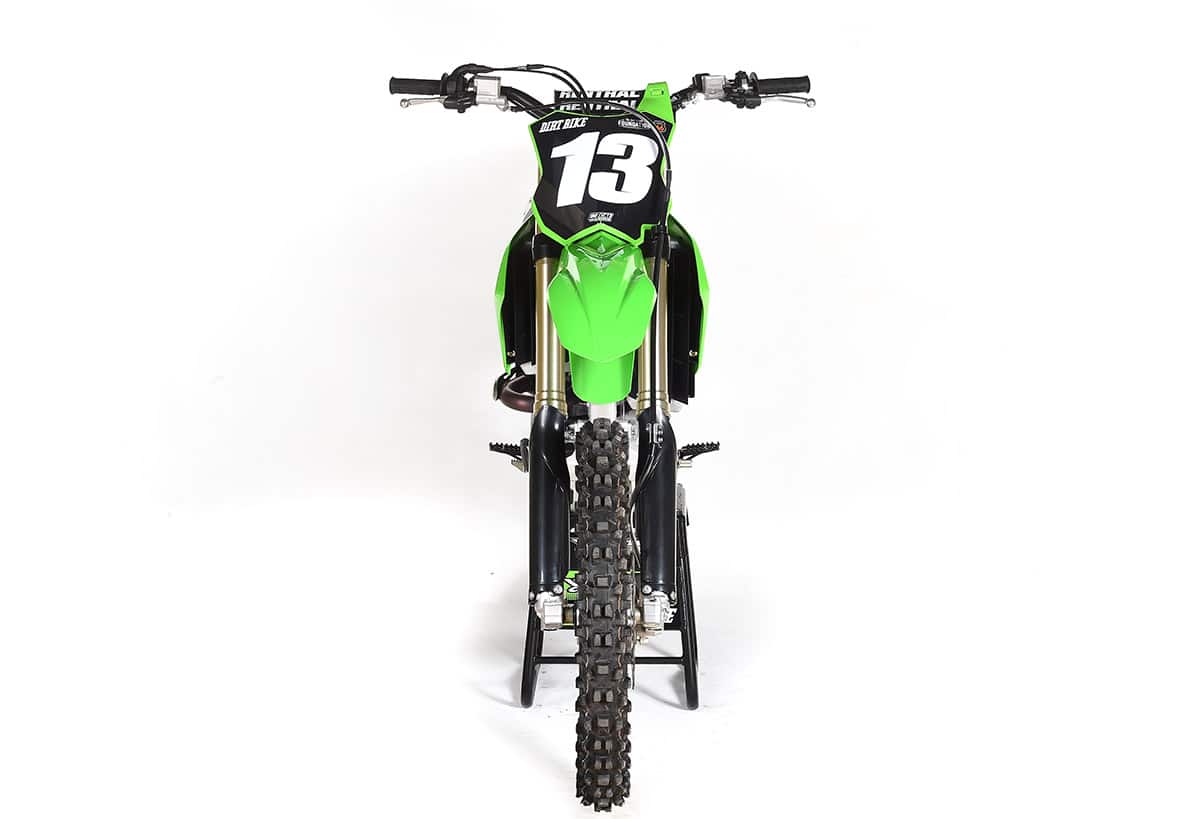 Our biggest complaint with the previous KX250 was that it was a little high-strung. It was fast but everything happened way up top. Now it seems like a completely different bike. Most of those changes were aimed at giving the bike more mid-range, but we would say it’s stronger all the way from the bottom to the top. We will be riding the heck out of this bike, so stay tuned,we will learn a lot in the next few weeks. 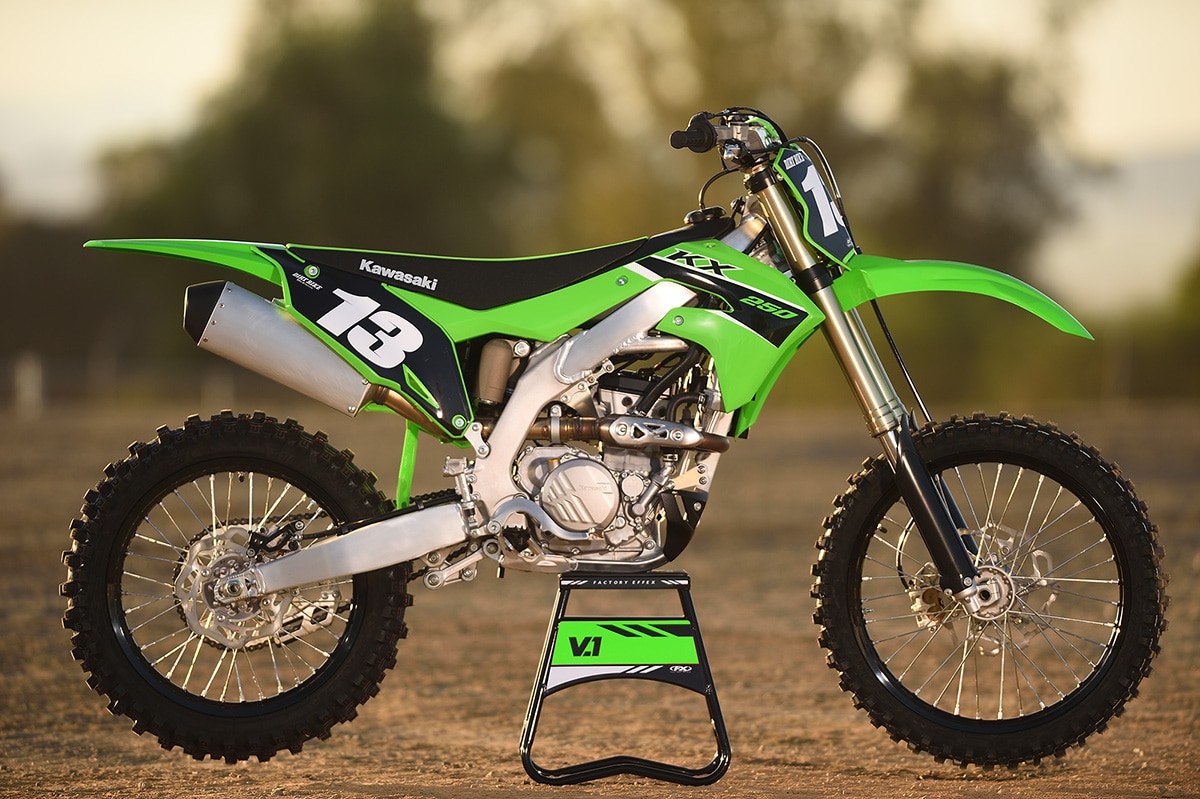 Here’s what KTM has to say about its newest electric bike: KTM North America, Inc. is pleased to introduce the latest innovation in the E-Mini range with the addition of the 2023 KTM SX-E 3. Positioning itself at the grassroots level, the 2023 KTM SX-E 3 charges into the electric lineup as the ideal starter package for aspiring young riders. With a tailored power output, smaller wheels, and lower seat height, it is the perfect choice for riders still finding their feet – and throttle. KTM’s electrified motorcycle family now includes the new KTM SX-E 3, a beginner-friendly e-mini that joins the KTM FREERIDE E-XC and KTM SX-E 5. Following its success building the Micro-E class at Loretta Lynn’s Amateur National Motocross Championship, the KTM SX-E 5 has become a favorite with young mini racers and their parents. This innovative machine has paved the way for the new KTM SX-E 3, taking its position as a true entry-level motorcycle and a steppingstone into the world of motocross. 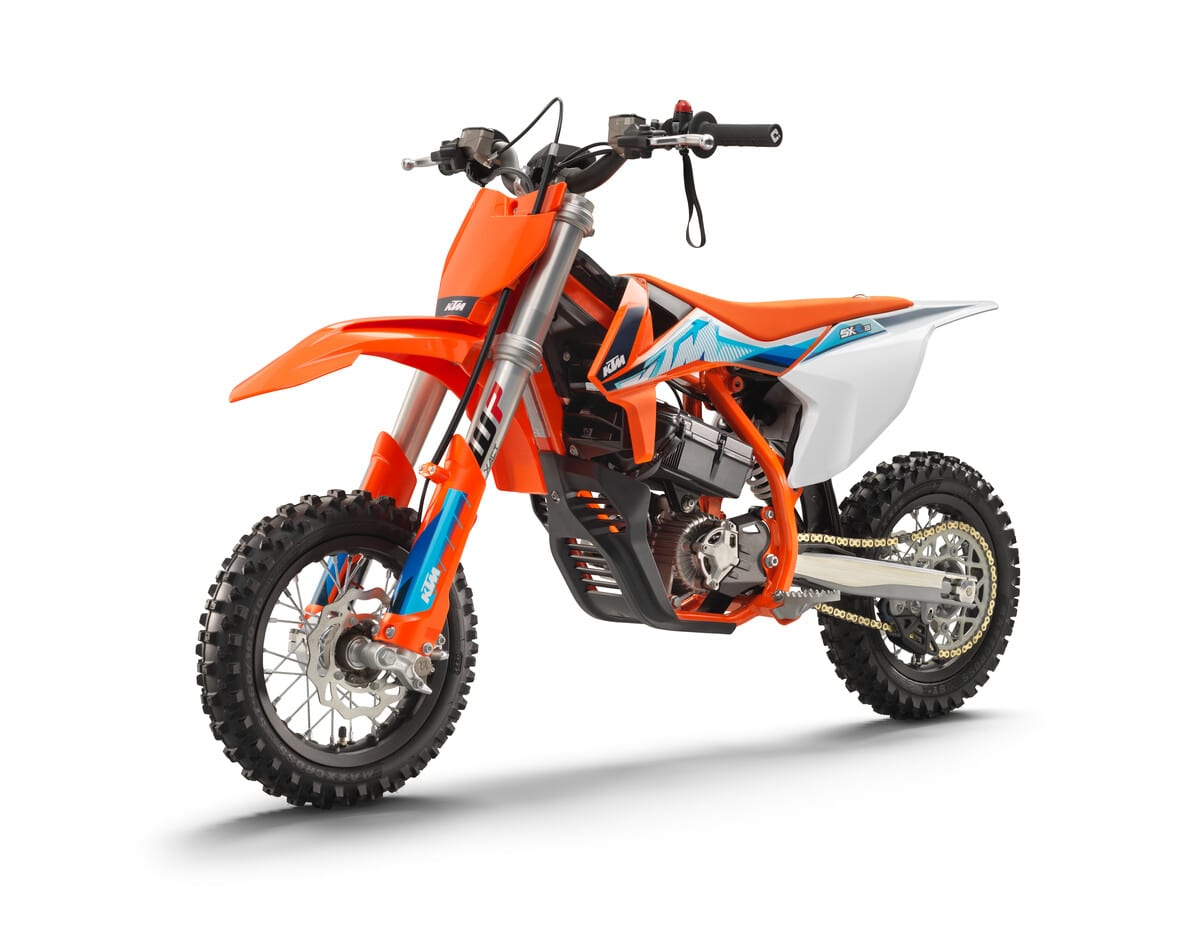 The KTM SX-E 3 also features an adjustable seat height, which can be reduced to 555 mm / 21.8 in by lowering the bodywork/seat, mounting the rear shock in an alternative position, and lowering the front fork in the triple clamps. Additionally, the KTM SX-E 3 is fitted with a roll-over sensor, which will cut power after a tip-over. This is supported by a wrist-worn lanyard key, which also stops the motor. In terms of accessibility, the low noise and zero emissions make the KTM SX-E 3 more approachable to younger riders by being less intimidating and more accepted in areas where riding is often restricted. Keeping the KTM SX-E 3 charged is easy thanks to an external charger supplying up to 900 W. This can be connected to any 110- or 230-Volt socket and plugs directly into the battery pack for easy charging, with a full charge from empty taking approximately 70 minutes. 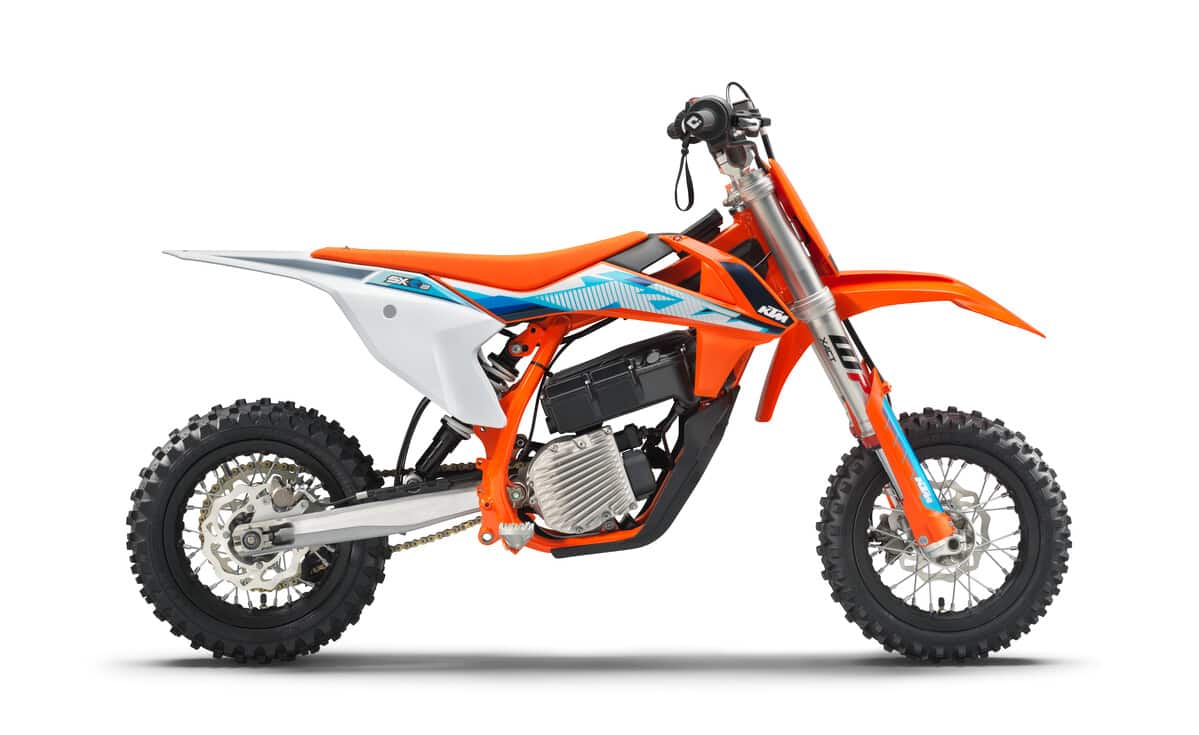 The KTM SX-E 3 sets the benchmark for electric-powered mini-motorcycles, showcasing KTM’s commitment to creating opportunities for broader electric mobility by changing mindsets, starting in the mini-cross arena. Look for the 2023 KTM SX-E 3 at authorized KTM dealers from October onward.

AlpineStars hosted a ride day at Perris Raceway last week to introduce its 2023 line of riding gear. All the the big AlpineStars riders were in attendance, including Eli Tomac, Chase Sexton, Jason Anderson, Hunter Lawrence and Jett Lawrence.

Two of those riders were on new bikes. Eli Tomac got to ride the 2023 Yamaha YZ450F, completely with a newly earned number one plate. We still hope he gets to ride with that number plate in the 2023 Lucas Oil Pro Motocross season, but right now that looks unlikely. He will certainly ride the new bike with the new number in the 2023 Monster Energy Supercross season. Of the two bikes he had, one was sporting a hydraulic clutch, the other was not.

Jett Lawrence was riding with his #18 number plate on a new Honda CRF450R. He has had a number of tests sessions on a 450, and he says it suits his riding style well. He will be racing the bike for the first time at the Motocross of Nations on September 24th. He will be joined on the Australian team by his brother and Mitch Evans. 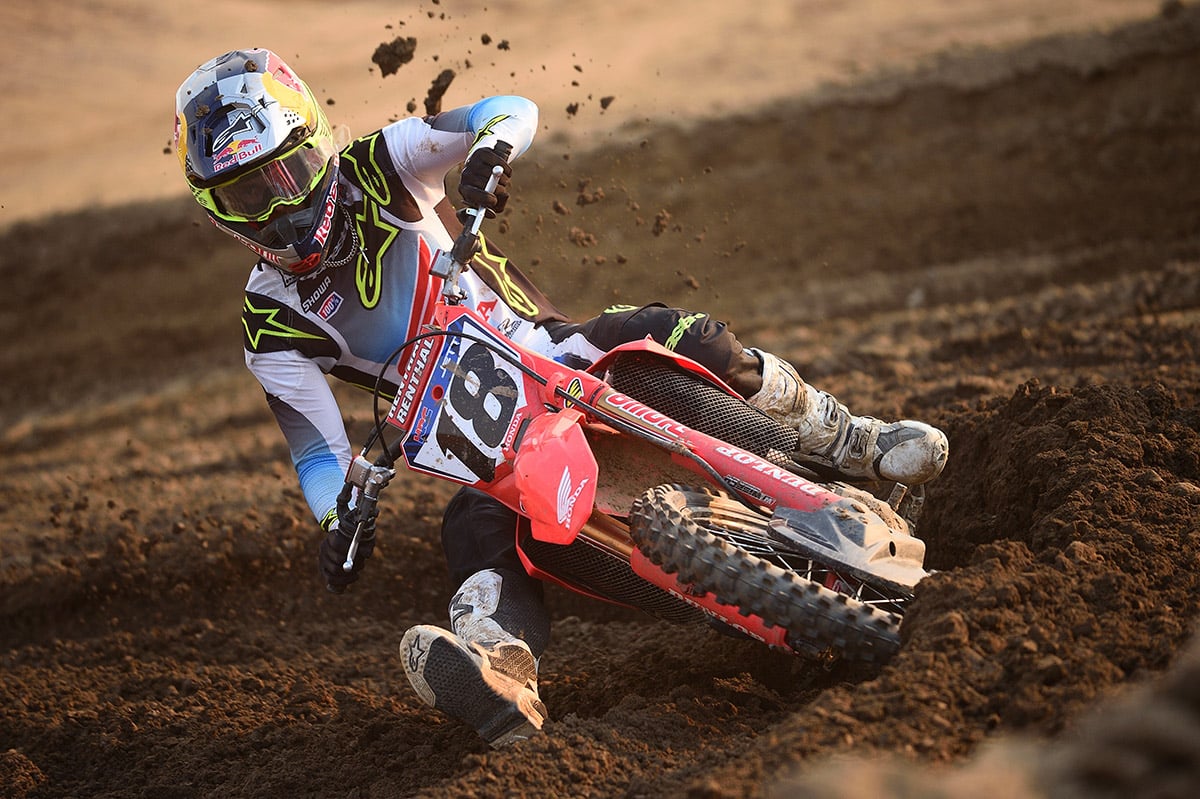 Hunter will be in the 250 class both in the MXoN and for the entire 2023 season. With his brother out of the way in the outdoor class, he will be one of the class-favorites, along with Jo Shimoda, Justin Cooper and newly crowned MX2 World Champion Tom Vialle. 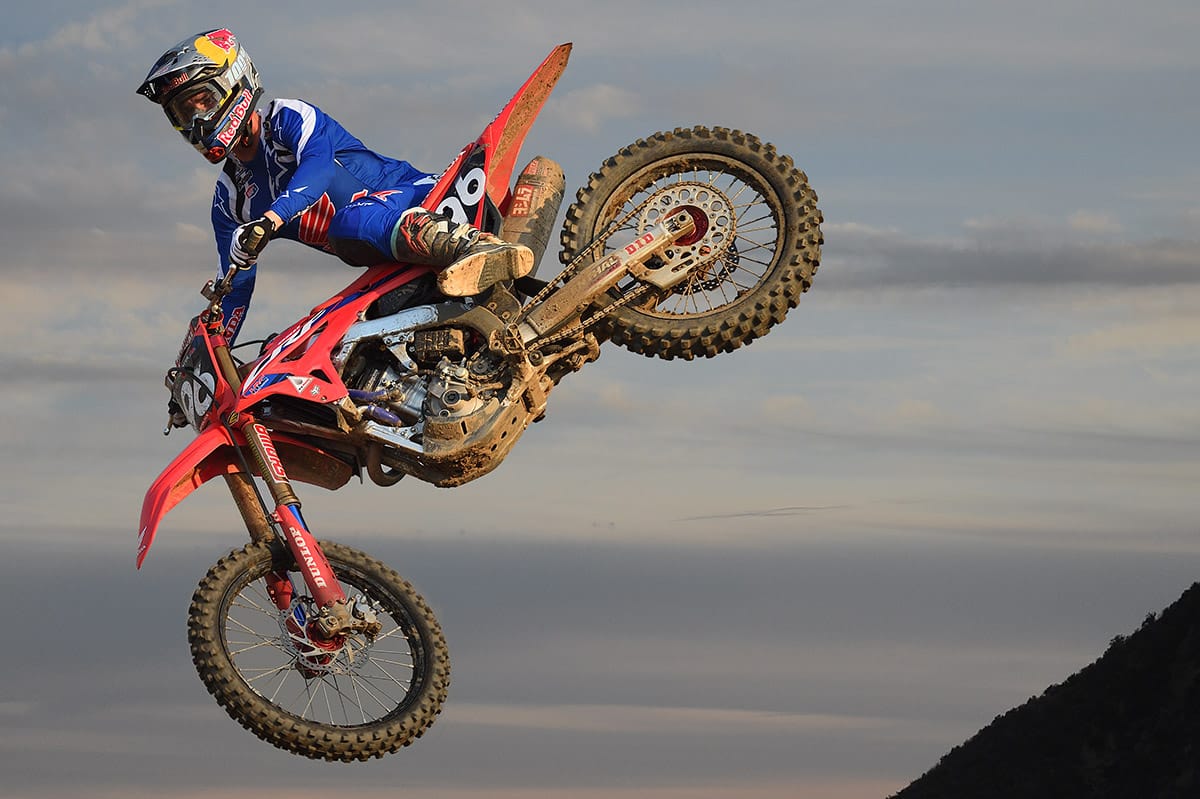 You can click here to check out the new AlpineStars gear for yourself. 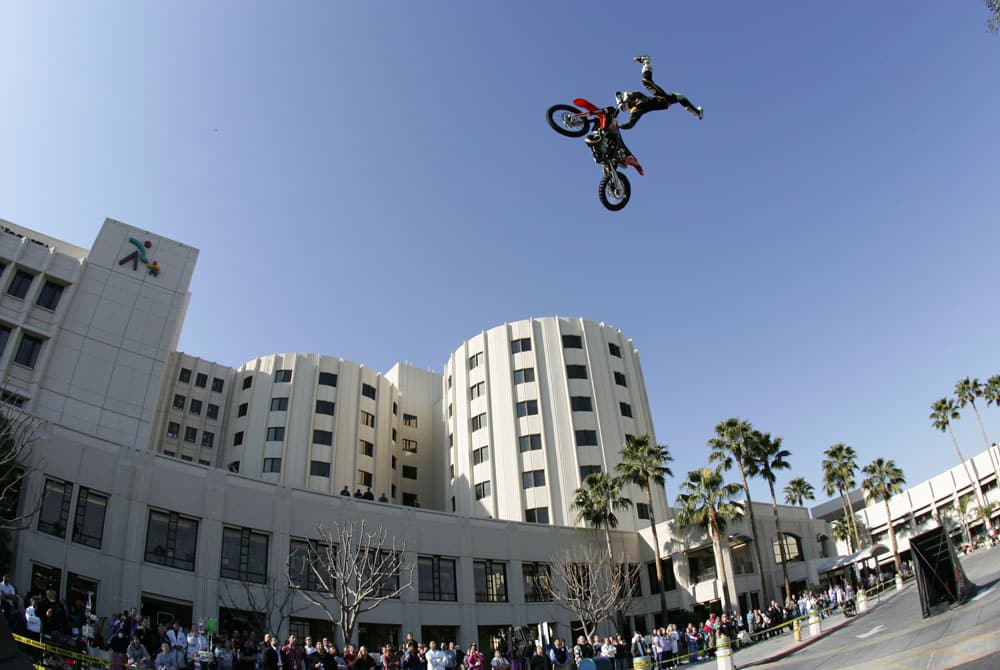 Although I rarely admit it, Steve Bauer has been a friend of mine for about 40 years. He is once again organizing the Big Air Kid’s Fair which is all about brightening the day for the patients, families and caregivers at Loma Linda University Children’s Hospital. Following a  hiatus of several years, the Big Air Kid’s Fair returns on September 14, 2022. The event will be held at the newly expanded Children’s Hospital Amphitheater, which was part of a $1.5 billion construction project completed in August, 2021.

Andy Bell of Nitro Circus fame has committed to again serve as emcee for the event, Jimmy Fitzpatrick, Taka Higoshino and the rest of Fitz’s Army will be hitting the jump ramps and Roland Sands is bringing out some street bike stunt riders.

How you can help:
If your company sells apparel, or manufactures products, they are looking for items suitable for children, ages infant to 18. Adult sizes are welcomed as well, for the family members of the children. So, basically any clothing, sized YS through XXXL, is appreciated. Hats and beanies are also a big hit with many of the patients who have suffered hair loss from treatments. Anything that will bring a smile to the faces of the patients and their families is so appreciated. In addition, any cash raised will be used to buy items on the “Wishlist” that the hospital staff provides us each year. These are items that fall outside the hospital’s budget constraints, yet are essential for promoting healing and happiness. In past years, we have purchased Wii consoles, video games, toys etc. Buying frivolous stuff for sick kids may be a low priority to the bean counters, because that’s their job, but we think of it as job one.

It’s my hope that your company will choose to be a part of bringing a smile to so many faces. Your product contributions are welcomed, please contact Steve Bauer below for shipping address.

THERE SHE BLOWS AGAIN: MR. KNOW-IT-ALL