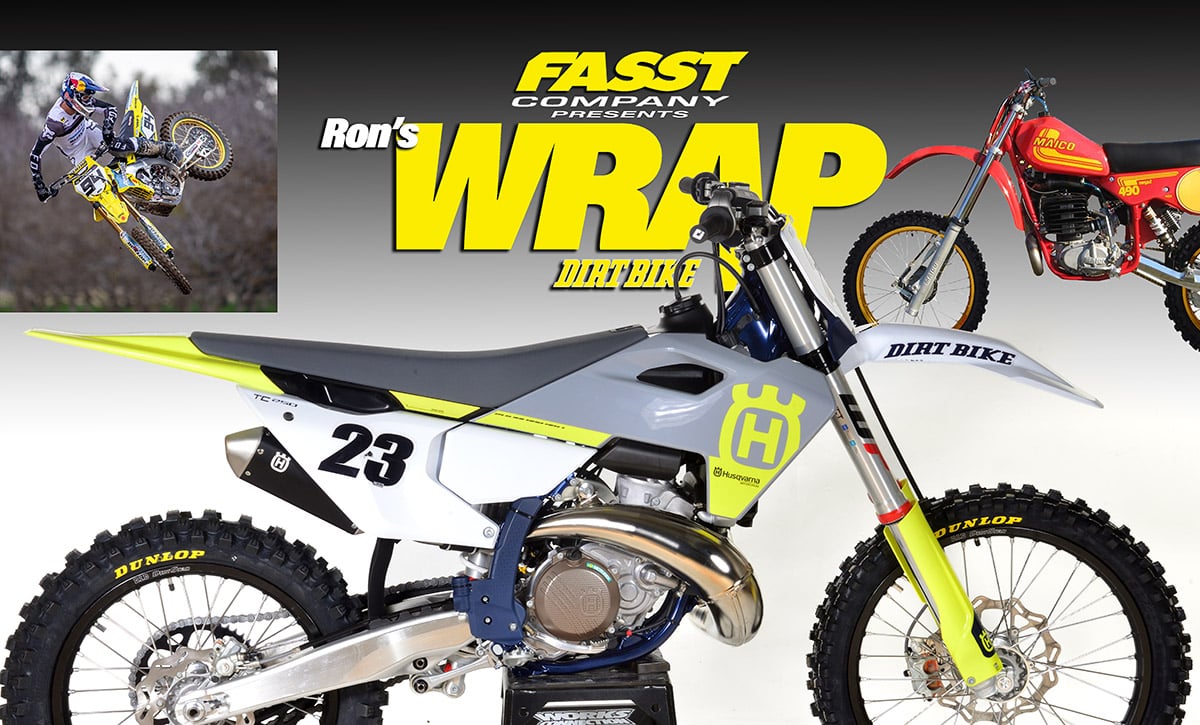 We’ve been riding the new Husqvarna TC250 motocross bike for a few weeks now and we’re impressed. It’s completely new. Last year’s TC250 had no electric start, no electronic fuel injection and used an archaic centrifugally-controlled power valve–essentially all the same technology as a two-stroke motocross bike from the late ‘70s. To be fair, most of the tech presented by the new TC250 has been previously seen elsewhere. What we haven’t seen before is the integration of it all. More specifically, the engine’s CPU controls the spark advance, the fuel mixture and the power-valve opening. So the exhaust-port timing is dictated by a combination of rpm and throttle opening. The fuel injectors are located in the throttle body now. Transfer Port Injection is only seen on the off-road models.

Along with the new motor, the 2023 TC250 got a new chassis, with frame and rear suspension designs similar to those of the new four-stroke motocross bikes. Husqvarna’s marketing team made the deliberate decision to slightly reduce suspension travel on all of its competition bikes compared to comparable KTM models in order to reduce the seat height. On our scale, the new TC250 weighs 222 pounds without fuel–that’s 7 pounds more than last year. That’s pretty impressive considering that it now has an electric starter and a battery.

The TC250’s power delivery has just enough hit to be fun, but not so much that it’s hard to control. The low-end power is excellent. It’s far more powerful down low than any of the 250 two-strokes we’ve previously tested. Peak power is still excellent and there’s still a big surge, right where it should be. But something about the new motor makes it more receptive to partial throttle openings. You learn pretty quickly that the TC250 isn’t an all-or-nothing bike. You can delay the big hit simply by backing it down a little. In other words, you use throttle control. The power delivery is also much cleaner than it is on traditional carbureted two-strokes. When you’re revving the bike on the start line (i.e. with no load on the motor) it sounds a little dirty, like it has to clear its throat. Once you’re under way, though, that’s gone. On top, the TC revs out fairly well, but nothing to get too excited about. You gotta shift early and frequently. We found that the map switch makes a real difference. The left side of the handlebar has two dedicated buttons. The bottom button gives you more on top. This is nothing new, of course, but the difference is more dramatic than we are used to. With Husky’s four-strokes, the map switch makes no difference that can be measured on a dyno–only seat of the pants. The guys at Pro Circuit tell us that’s not the case here. The aggressive map really is worth more than a horsepower in portions of the dyno curve. We will have a full test of the 2023 Husqvarna TC250 in the March, 2023 print edition of Dirt Bike.

Anaheim 1 is tomorrow! We will have live updates right here at dirtbikemagazine.com from the conclusion of the first timed practice session. Tune in!

Suzuki is the last of the OEs to announce its full team for the 2023 Supercross/SuperMotocross season. With the addition of Ken Roczen, the H.E.P. team was restructured–there had been a conflict between Roczen’s Red Bull association and H.E.P’s Twisted Tea sponsorship. Here’s the official announcement from Suzuki:
Suzuki Motor USA, LLC is pleased to announce its continuation with HEP Motorsports for the 2023 season. Suzuki will support two squads under the HEP Motorsports umbrella: Progressive Insurance ECSTAR Suzuki and Twisted Tea Suzuki Presented by Progressive Insurance.

Progressive Insurance ECSTAR Suzuki will include Ken Roczen (94) on the Suzuki RM-Z450, while riding the RM-Z250 will be Dilan Schwartz (85), and Marshal Weltin (50).
Roczen, who has a strong affiliation with the brand and won his most recent AMA championship with Suzuki, will be reunited with the RM-Z450, and bring his exciting style, determination, and grit back to the RM Army. Schwartz is back on a Suzuki for 2023 after a rollercoaster season in 2022. After impressive performances aboard the RM-Z450 at the beginning of last year’s motocross season, Weltin joins the RM Army full-time and is looking to build on his momentum.

The Twisted Tea Suzuki Presented by Progressive Insurance effort continues with veteran rider Kyle Chisholm (11) from Clearwater, FL, crowd favorite Shane McElrath from Canton, NC (12) and Brandon Hartranft (37), who hails from Brick, NJ.
Joining the team for 2023, Chisholm brings solid racing and set-up experience to the team and is looking forward to competing aboard the RM-Z450. Alongside Chisholm, the exciting racecraft of McElrath augments the RM Army, and McElrath is looking to make serious strides in 2023. Back again with the Twisted Tea Suzuki Presented by Progressive Insurance team is Hartranft. Injured at a pre-season training session incident, Suzuki Motor, USA wishes Brandon a speedy recovery as he looks forward to returning to the track.

Earlier, Suzuki announced the line-up for Bar-X Suzuki. They will have Derek Drake, Carson Mumford, Robbie Wageman and Ty Masterpool. We’re especially pleased to see former Dirt Bike test rider Wageman get on-board. He reports that the bike is a rocket!

I got into the test-writing business in 1981, which, as it turned out, was a very significant year for motocross bikes. Here are a few interesting bikes that I got to test when they were brand new.

The 1981 Suzuki RM125 gets the honor of being the first liquid-cooled dirt bike from Suzuki as well as the first single-shocker. It was far and away the best 125 of the year and represented a massive leap forward. Oddly enough, the reign of the Suzuki RM125 didn’t last long. It was soon surpassed by other makers; most notably Honda.

This was the end of an era for Maico, but what a glorious end it was. To this day, the ‘81 490 is virtually worshiped by vintage bike enthusiasts. It single-handedly changed the open class in motocross. Sadly the end was already in sight for the Maico dynasty due to family squabbles.

Not all milestone motorcycles are famous for their performance. Some just bring new technology to the table. That was the case with the 1981 Honda motocross line. The CR125R and CR250R had liquid-cooling and single shock suspension. Honda got the linkage placement radiator layout right, and others would soon follow suit. Despite the innovation, the 1981 Hondas were mediocre performers.

This was the first mainstream liquid-cooled motocross bike and would have been more noteable if it hadn’t been upstaged by the Suzuki. Yamahas already had single shock suspension for seven years, but the lack of linkage left performance on the table. By next year, the YZ125 would have linkage and radiator location similar to Suzuki’s.