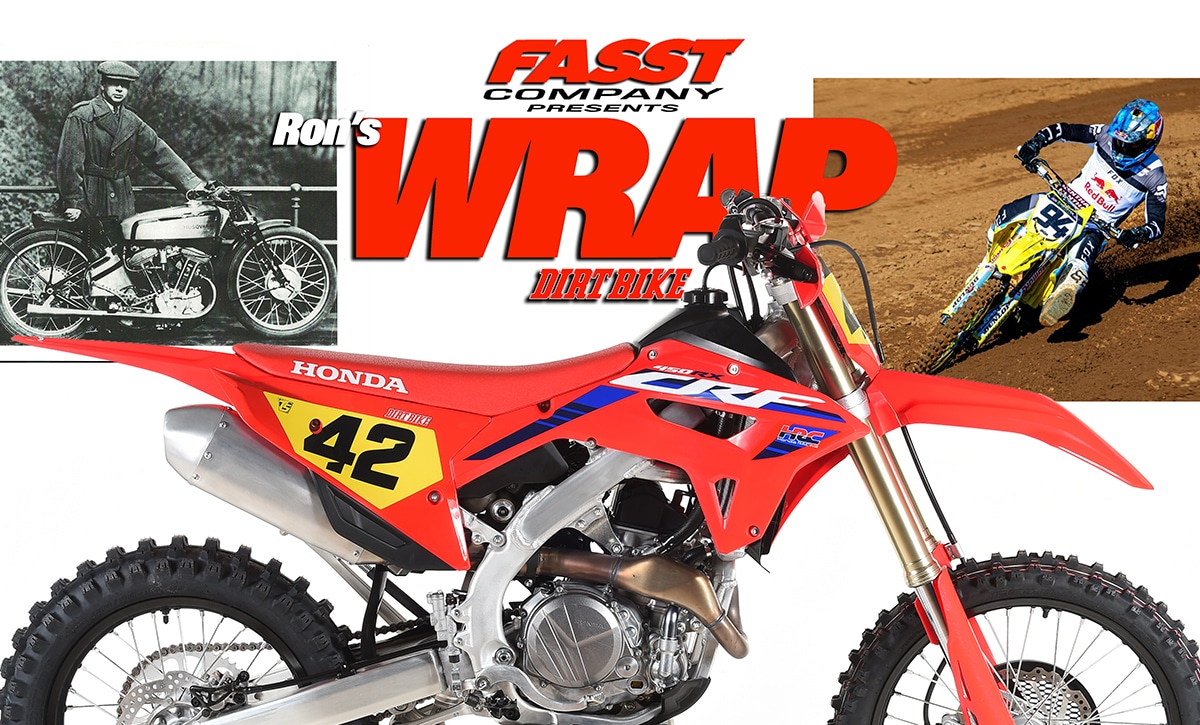 Honda gave us our first chance to ride the 2023 CRF450RX last week and since then we’ve had it out on several occasions. It might be one of the most pleasant surprises of the 2023 model year so far. This bike is Honda’s version of the closed-course cross-country racer, meaning it’s purpose-built for western-style off-road racing like WORCS and NGPC. All of the manufacturers offer something in this category and for the most part, they adhere to the same formula: you start with a motocross bike, soften the suspension, put on an 18-inch rear wheel, more fuel capacity and a kickstand, then bolt on a few items like handguards and a skidplate. Viola! Instant off road bike. Honda went a little further by developing specific off-road maps–three of them, in fact, but the bike is still very competition oriented.

For 2023, it received many of the same upgrades that the latest CRF450R motocross bike got. That includes a smaller throttle body, a narrower intake-port shape, a longer intake funnel and a new cam profile. The frame has the same basic dimensions, but material thickness has been increased in several locations to alter flex characteristics. Along the same line, steel engine mounts replace the aluminum ones. The suspension valving has been revised as well and the muffler is new. It is still the same as the one used for the motocross bike. Likewise, the five-speed gearbox is the same.

Honda uses a three-button map switch on the left side of the handlebar for mapping changes. You can pick one of three mapping options–one flash is the standard map, two flashes is mild and three flashes is the aggressive map. You can also activate three levels of traction control with the green button. If you press the starter button while the motor is already running, it activates launch control.

We’ve always liked the RX as a race bike–even for motocross. In fact there were years it was probably a better motocross bike for the average rider. The previous RX was very aggressive off-road, though. It had a lot of power and hit very hard. Now, the power delivery is much more friendly. In the standard map, it’s smoother and more controllable.  You can roll it on with good results–the Honda always had an incredible rush of power between 7500 rpm and 8500 rpm and that could be hard to deal with. Now, it makes as much power as ever, but ramps up a little more gradually. The map switch is a genuine benefit and all three settings are useful. In the aggressive map it has more power in the upper mid range and is excellent on a motocross track and faster GP tracks. In the mild map, the bike is smoother still and actually not too bad for trail riding. That doesn’t mean it’s a bike for twisty, tight trails, though. It’s still a racer and is a handful if you’re trying to thread your way between trees or deal with rock beds. It will overheat and it will stall, just like any of the other 450 cross country race bikes. We’re still on the fence about traction control. Most of the time you only really notice it when the bike suddenly goes flat on a loose hill climb–it’s not going to make that much difference on rocks or in mud.

Overall, we like the suspension set up. The bike is well-balanced and seems aimed at intermediate-level GP racing. That’s probably appropriate, given that fact that it’s notoriously difficult to second guess where and how an off-road bike will be used. If you plan on riding a GP or some amateur-level motocross, the stock setup is pretty darn good. For enduros it’s stiff, for MX it’s soft.Overall the bike turns very well and is reasonably easy to toss around. On our scale, it’s 238 pounds, which is about 5 pounds heavier than the KTM or Husky. It does seem a little larger and bulkier, although that’s probably a superficial consequence of the bulky fuel tank. It has a 2.1-gallon tank, and clearly, Honda had a difficult time finding a place to put the extra capacity. The motocross version feels like a much smaller bike with its 1.6 gallon tank. 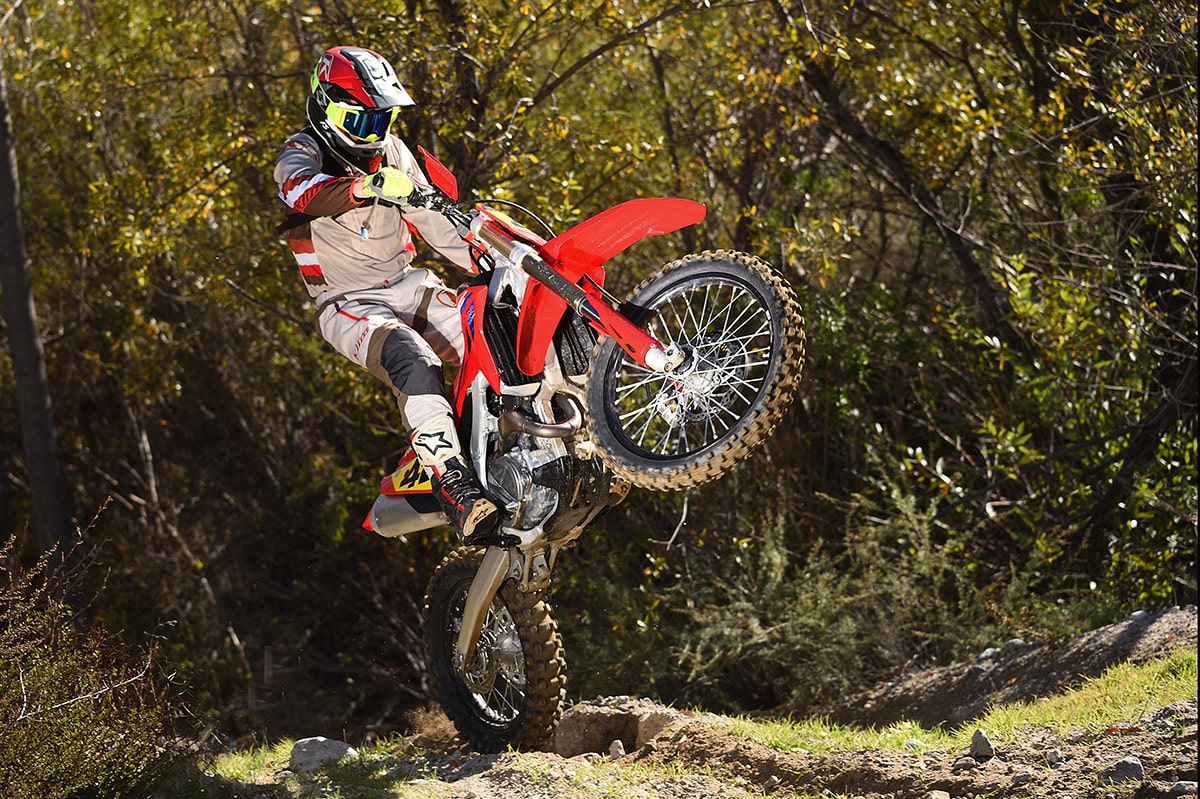 Most of the other details are good.  We actually like the gear-ratios, even though it would be nice to have another gear on top. The handguards are well made, a Renthal Fatbar is standard and the addition of a hydraulic clutch a few years back was a great upgrade. The 2023 is an undeniable improvement over the previous versions of this bike and shows that Honda truly tested the bike off-road. It’s still more of a race bike than a trail bike, and if that’s a deal killer for you, you probably should look into the Honda CRF450X, which was designed specifically as a trail bike. We’ll have a full test on the 2023 Honda CRF450RX in the March, 2023 print edition of Dirt Bike magazine, which will be on the newsstands in February. 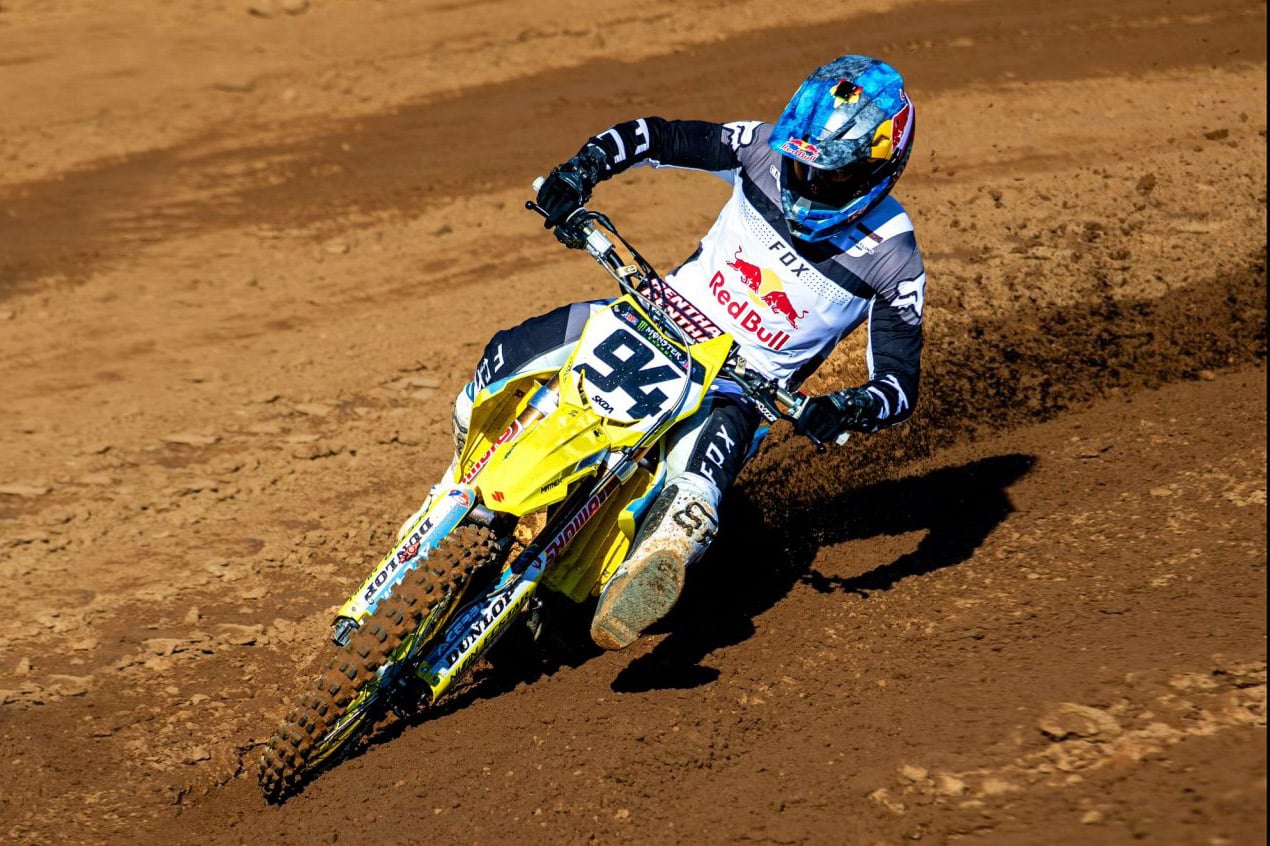 After buying and riding a number of motorcycles, Ken Roczen finally made the call to go with the HEP Suzuki team for the 2023 season. He apparently loved the bike from the start, but there were financial pieces to the puzzle that had to fall into place. The deal is said to be very lucrative for Kenny. The official press release is below.

H.E.P. Motorsports is thrilled to announce that the team has signed Ken Roczen as its premier rider for the 2023 season. Former AMA motocross champion Roczen will be aboard a Suzuki RM-Z450. Roczen, who won his most recent championship on a Suzuki, will be reunited with the brand and bring his exciting style, determination, and grit back to the RM Army. Ken Roczen will compete in the upcoming 2023 Supercross and Motocross Championship series which is set to start on January 7 at Anaheim Stadium in Southern California.
“I am beyond excited to reconnect with Suzuki for the 3rd time in my career. We’ve had a lot of success in the past and I’m looking forward to seeing what we can accomplish together in our future.” said Roczen, “ I have a lot of confidence in Suzuki and the H.E.P. Motorsports program and I am excited to finally get the new year going with a fresh start. From the moment I got on the bike I felt right at home. It has been a welcome surprise how quickly I’ve adapted to the bike and the team. We will be ready to go racing come January 7th.”

A homecoming of sorts, Ken Roczen and Suzuki enjoyed much success in the past including a very successful amateur career in his native Germany on Suzuki motocross machines. Aboard the prior generation Suzuki RM-Z450 Roczen won the AMA 450 Motocross Championship in 2016. Roczen and Suzuki are determined to continue this tradition of success in 2023 on the Suzuki RM-Z450 in Supercross and Motocross competition.

“We are pleased to have Ken back on a Suzuki and part of the RM Army,” said Chris Wheeler, Motorsports Manager for Suzuki Motor USA, LLC. “ Ken’s experience, determination and incredible skill are everything we need to help Suzuki and H.E.P. Motorsports achieve the success we are all striving for in 2023.”

“Everyone is super excited to have Ken Roczen on board” said Dustin Pipes, Team Principal at H.E.P. Motorsports. “Having Ken as part of our team is sure to elevate our performance and we can’t wait to go racing at A1 in January.”

Kenneth Olausson has a regular blog on the Husqvarna website that often has excellent stories about old Huskys. This month he has a story about some rare glass plate photos that were saved from a dumpster 25 years ago. At the time, the technology didn’t really exist to restore the photos, but eventually the photos were digitally recreated and they revealed fascinating photos of a forgotten era in Swedish racing. You can check out the full story on the Husky Good Old Times Blog here.