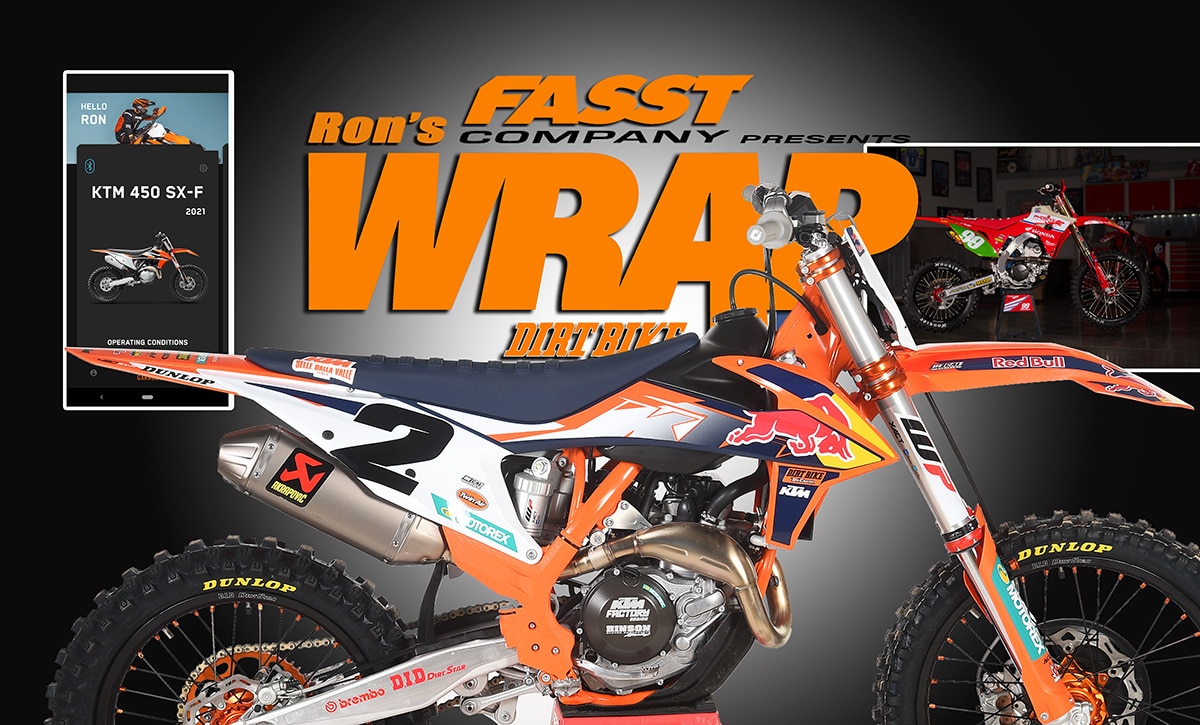 We’ve been hearing about KTM’s smartphone-based tuning app since the first of the 2021 models hit, but we haven’t actually had the opportunity to try it for ourselves until now. The 2021 ½ 450SX Factory Edition is out and its most significant feature is that it’s smartphone-ready. Initially the My KTM app was designed to be compatible with all 2021 SX-F and XC-F models, but, as it turned out, obtaining the connectivity unit to retrofit those models is difficult. The part comes on the Factory Edition. The app connects to your bike via bluetooth, so it takes a little setup time. It might go smoothly, it might not. There are about a half-dozen things that can mess you up until you have the drill. This isn’t just us; even the guys at KTM are a little vague on initial setup. To start, you select your model of motorcycle. For some reason, the 2021 Factory Edition isn’t yet listed as an option. You have to choose the 2021 450SX, NOT the 2020 Factory Edition.

In your smartphone’s bluetooth settings, when you tap “pair new device” you should see “KTM SPORTMOTORCYCLE” listed. If not, there could be a number of things wrong. Try tapping the button on the bike’s crossbar pad three times. If that doesn’t work, try forgetting any earlier connections. Good luck. This is a little dicey with different types of phones. Once you’re connected to the bike, the fuel-pump turns on briefly. That’s a good sign.

Once you’re connected, you scroll down and tap on “ENGINE.”  Then tap on CREATE NEW MAP.” Give your map a name, tap on the “ADVANCED” tab and then you can start to play around. For those who are used to other tuning apps like Yamaha’s, this is a very different experience. You don’t get to mess around with any of the mixture or advance numbers. Instead, you are given six fields: Track type (sand, gravel or hardpack), track condition (wet or dry), engine braking (five levels), throttle response (five levels), traction control (five levels) and launch control. When you have a map built, you upload it and if all is good, you get a screen that says “upload successful.”

We spent a day trying all the options and all the different combinations. Some settings made very little difference, others were obvious. In general, we like less engine braking. It didn’t feel like the throttle response adjuster did very much, and oddly, the power for sand and hard pack are almost the same. Only the “wet gravel” combination seems to tone the bike down. Likewise, the different levels of traction control are very subtle. The app also gives you a tool to help with suspension settings. It doesn’t have to be connected to use this feature. You enter  your weight, ability and track conditions and it gives you recommended clicker settings.

The KTM app is fun to play with, but we wouldn’t call this a tool for serious tuners. You can see everything it has to offer in a morning of testing. If you expect to develop a secret map for racing at Mammoth or to work with engine modifications, this won’t be of much use. It’s too dumbed down for the weekend racer. Comparisons with the Yamaha Power Tuner are inevitable. That is the exact opposite. It allows you to adjust so many different parameters that it’s easy to get lost. The average consumer stands virtually no chance of coming up with an effective map without hours and hours of work. The saving grace is that you don’t have to. Yamaha user groups share maps and even Yamaha has them posted. Engine tuners have been known to charge for maps they have developed for specific fuels or modifications. That won’t happen with the KTM app.

As for the rest of the bike, the KTM Factory Edition is exactly what you expect. It’s an amazing bike, just like the standard 450SX-F. The only performance difference is the addition of the Akrapovic slip-on muffler. That makes the bike a little smoother in the middle, but it’s already super smooth and crazy fast. We don’t know if there are any suspension differences. If so, they aren’t earth shattering. The main items you get for the extra $1000 in MSRP are the connectivity unit, the muffler, a Hinson clutch cover, orange anodized parts (hubs, triple clamps), a holeshot device, graphics, seat cover and an orange frame. In the past we have generally seen the Factory Edition as a preview of the next year’s model. That might not be the case in 2022. We will have to wait and see.

American Honda today announced its lineup of off-road racing teams, some of which have already begun competing in various 2021 racing series. As before,  Johnny Campbell is serving as Off-Road Coordinator. Preston Campbell is campaigning both the NGPC and NHHA series, aboard the CRF450RX and CRF450X, respectively. Preston already took part in the opening rounds of both series, finishing ninth and fourth in the Pro class. In addition, 2020 Dakar Rally winner and Monster Energy Honda rider Ricky Brabec will take part in selected U.S. races between his international rally competitions, riding for JCR in events like the AMA District 37 Sprint Enduro series. Also taking part in selected events are Tarah Gieger, Kendall Norman and Johnny Campbell himself.

The Mark Samuels-owned SLR Honda team is expanding its project for 2021, with several new riders competing in new classes and championships. The team is best known for its domination of the SCORE International Off-Road Racing series, in which it has gone undefeated over the last three years aboard the CRF450X, including victories in the prestigious Baja 1000. That program will continue this season, as will efforts in the NGPC and WORCS series, with Cole Martinez in the Pro class aboard a CRF450RX and Tallon LaFountaine defending his NGPC 250 Pro title aboard a CRF250RX. The team has also added up-and-coming riders Evan Stice and Allen Mendelssohn, competing in NGPC’s 250 A class and WORCS’s Pro Am class, both of which Stice topped at those championships’ respective series openers. In addition, the team is entering the NHHA series in 2021, with CRF450X-mounted Justin Morgan—a desert-racing veteran with a number of Baja victories.

David Eller’s Phoenix Racing Honda team has already been active this year in AMA Arenacross (where reigning champ Kyle Peters is undefeated through the first three tour stops) and AMA Supercross. The team will also continue in GNCC racing, with Cody Barnes and Triston Landrum campaigning the XC2 and 250 A categories, respectively, aboard CRF250RX race machines. The GNCC series is scheduled to begin February 20 in Union, South Carolina.

Each of these teams will offer trackside support for Honda-mounted amateur racers at the events in which they compete.

FAHRINGER RETURNS TO FACTORY ONE SHERCO

FactoryONE Motorsports has signed Nick Fahringer to the Enduro team once more. The Ohio native has been riding Sherco motorcycles for four seasons now. Nick won the 2020 South Eastern Extreme Riders (SEER) Championship having won five of the events and finished no worse than second in all SEER events.

“Being a part of the FactoryONE Sherco team in 2020 was a real treat. With a stellar bike and sponsor package the entire team and I were very competitive while constantly having fun at each event.  I am stoked to build on last season’s experiences with the FactoryONE team to continue dominating races and having as much fun as possible. I look forward to getting back into action and seeing everyone at the opening rounds this year,” said Fahringer.

We don’t know if this is the world’s biggest trophy or not, but it’s still pretty big.  Standing at nearly six feet in height, this hand-crafted capsule of motocross history was created by Harnk Robinson for the AMA Amateur Championships.  It is composed of aluminum and steel, and includes internal wiring that allows the trophy to emit light and fog from the rotating centerpiece. The hallmark of the build is Robinson’s incredible hand-engraved collage that serves as a journey through Loretta Lynn’s storied history. More than 300 hours went into Robinson’s meticulous design, which includes the founders of the event – Loretta Lynn and Dave Coombs – in addition to 24 past champions, including legends like Ricky Carmichael, Jeremy McGrath, James Stewart, and Ron Lechien. The centerpiece is surrounded by three hand-brushed brass plates listing more than 1,400 names to signify every champion, from every class over the past 39 years. A list that will continue to grow as more riders earn the coveted distinction of hoisting the number one plate at Loretta Lynn’s Ranch every summer. “I am honored to have been given this opportunity and to be a part of something that will have a legacy,” said Robinson. “Working with Monster Energy on this project gave me the ability to have some extreme creative freedom that I hope everyone will enjoy for many years to come.”