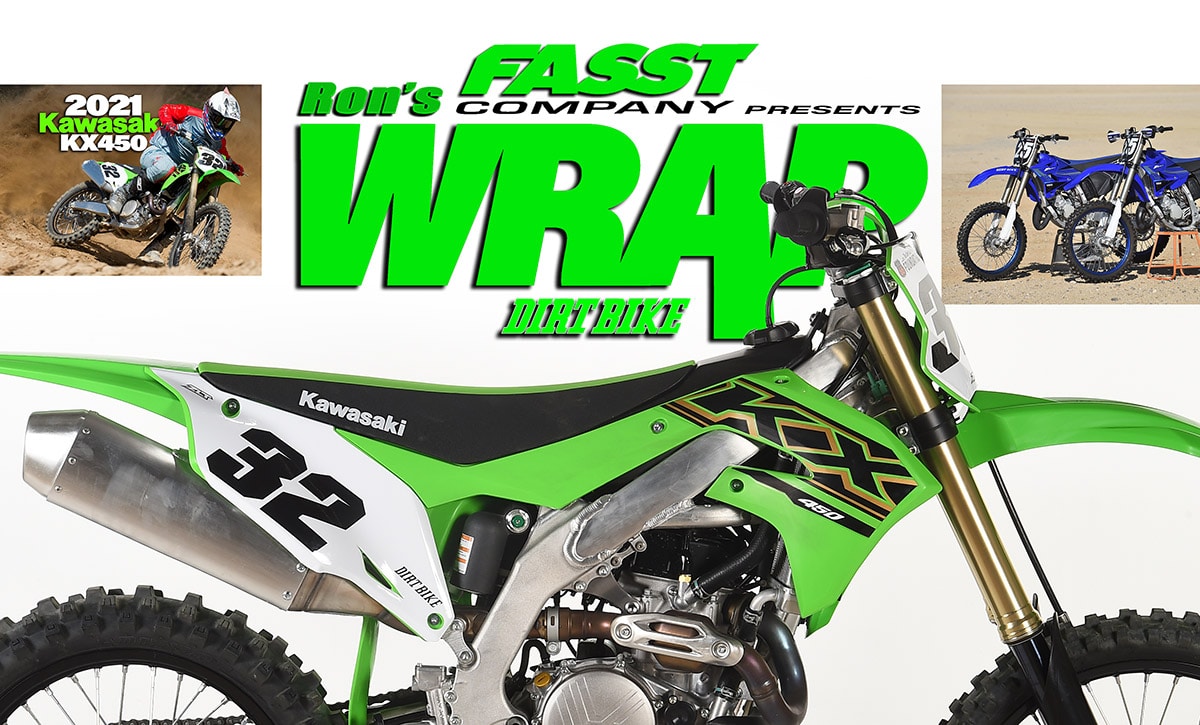 Kawasaki was the first manufacturer to release a 2021 model to the press. The new Kawasaki KX450 is in our greedy hands and we couldn’t be happier. Mark Tilley, in particular, is the  bike’s biggest fan. He used the 2020 model to dominate the Vet Expert and Senior Expert classes in the NGPC events and the SRA GPs held so far this year. The good news is that he will probably snatch up the new KX450XC model for 2021, letting the rest of us have a chance to ride the standard KX450. For a video of our first ride on the 2021 Kawasaki KX450, click here.

This bike has a fairly short history. It was completely and totally new in 2019, getting a new frame and motor with electric start and a hydraulic clutch. It was unchanged in 2020 and now it has three significant changes for 2021. The clutch was redesigned, using a cupped disc spring instead of coil springs. This is similar to the design KTM uses, which they call the DDS clutch. Kawasaki also gave the piston a dry lube coating. And finally, Kawasaki stepped up to a Renthal Fatbar handlebar. Kawasaki was the last holdout with a ⅞-inch aluminum handlebar. We always figured that the company was using that as a lightning rod for superficial criticism. Let critics focus on that if they feel they have to say something negative. The rest of the bike is difficult to pick on.

First of all, the clutch has a different feel. It already had a very light pull. For 90% of the world, that’s great, but the one drawback is that when you have an easy pull, you tend to overuse the clutch. Kawasakis have never had especially durable clutches, so that could lead to a short life-span for the plates. For the record, Mark Tilley has half of a season on his original 2020 Kawasaki clutch–it’s still going strong. Still, the new clutch should be more durable. The initial pull is about the same as the previous one, but it gets easier as it progresses. The engagement, on the other hand, is sharper. You know when it’s locked–there’s less feeling of vagueness.  As a side note, not everyone likes the feel of hydraulics. When Ryan Villopoto went to Europe in his last season of racing, he started off with a hydraulic clutch, then returned to a cable system. We have to say that he’s the exception to the rule, though. Virtually everyone else likes the feel of a hydraulic clutch.

Handling and power are still excellent. The Kawasaki was already the lightest of the Japanese 450s. On our scale, the 2021 model weighs 235 pounds without fuel. It still has a more stable, well-planted feel than virtually any other 450. That’s what we loved about the 2019/2020 version and why it won our last two 450 shootouts. It isn’t the fastest bike in the class. It’s actually one of the slowest, according to the dyno. But you don’t walk away thinking about it in those terms. It’s super smooth and easy to ride. It revs out cleanly without a sudden rev-limiter shut down. Suspension is also a strong point. Glen Helen was super rough on our only day of testing so far, and we reduced the shock preload from the recommended ride height (103mm), but we have much more testing to do. The full test will be in the November, 2020 print edition of Dirt Bike.

It’s been almost a year since Yamaha introduced the YZ125X off-road two-stroke. We first rode the bike at Randy Hawkins Ampro proving ground in Union South Carolina, then we raced it in the Six-Hours of Glen Helen. In all that time, we didn’t have the opportunity to ride the bike back to back with the standard YZ125. This week, he finally got both bikes at the same time and we were surprised at how different they felt.

The outward changes that make the YZ125 into an X are the 18-inch rear wheel and the kickstand. Within the motor, there are some significant other changes. The combustion chamber is larger, (10.1cm3 vs. 8.4), the powervalve is reshaped and its governor has a stiffer spring to make the valve open later and more slowly. The ignition timing is also changed, with 5 degrees more advance at low-to-mid rpm levels. The X still uses the same KYB suspension components, but the valving is lighter for off-road use.

When you ride them back to back, there’s a big difference in power delivery as well as peak power output. The X has a smooth roll-on and freakishly clean jetting. But, the power drops off right when you feel like you’re about to get into the meat of the powerband. Keep in mind that a standard YZ125 already is down on power compared to Euro 125 motocross bikes. It has enough to be competitive, but you rely heavily on the bike’s almost magic handling traits. On a motocross track, the X feels like a play bike. Naturally we took both bikes to a rocky second gear trail section and naturally, the X was superior there. The bike runs super clean and smooth down low. It still isn’t very powerful, but it is friendly. In suspension, the two bikes were more similar than we expected. With 150-pound Sean Lipanovich on board, the X suspension actually felt slightly better everywhere–even on motocross. The bottom line isn’t too much of a surprise. The standard YZ’s peak power advantage makes it a better racer everywhere. Even if you race a 125 off-road, it’s probably the better starting point. If you’re a play rider, then the X’s smooth powerband and cleaner low-range jetting make it more fun. And you gotta love that kickstand.

The AMA Board of Directors has voted unanimously to cancel the 2020 AMA Championship Banquet and AMA Motorcycle Hall of Fame Induction Ceremony for 2020 in response to the COVID-19 pandemic.

The board further asked AMA President and CEO Rob Dingman to direct staff to:

“The board made clear that its decision was to protect attendees from exposure to the coronavirus, particularly with the likelihood for an additional surge in cases next winter when the year-end celebrations are traditionally held,” said AMA Chief Operating Officer James Holter. “The board also felt that canceling the events was a responsible financial decision in light of expected low attendance, and the time and resource commitment necessary to hold such celebrations.” 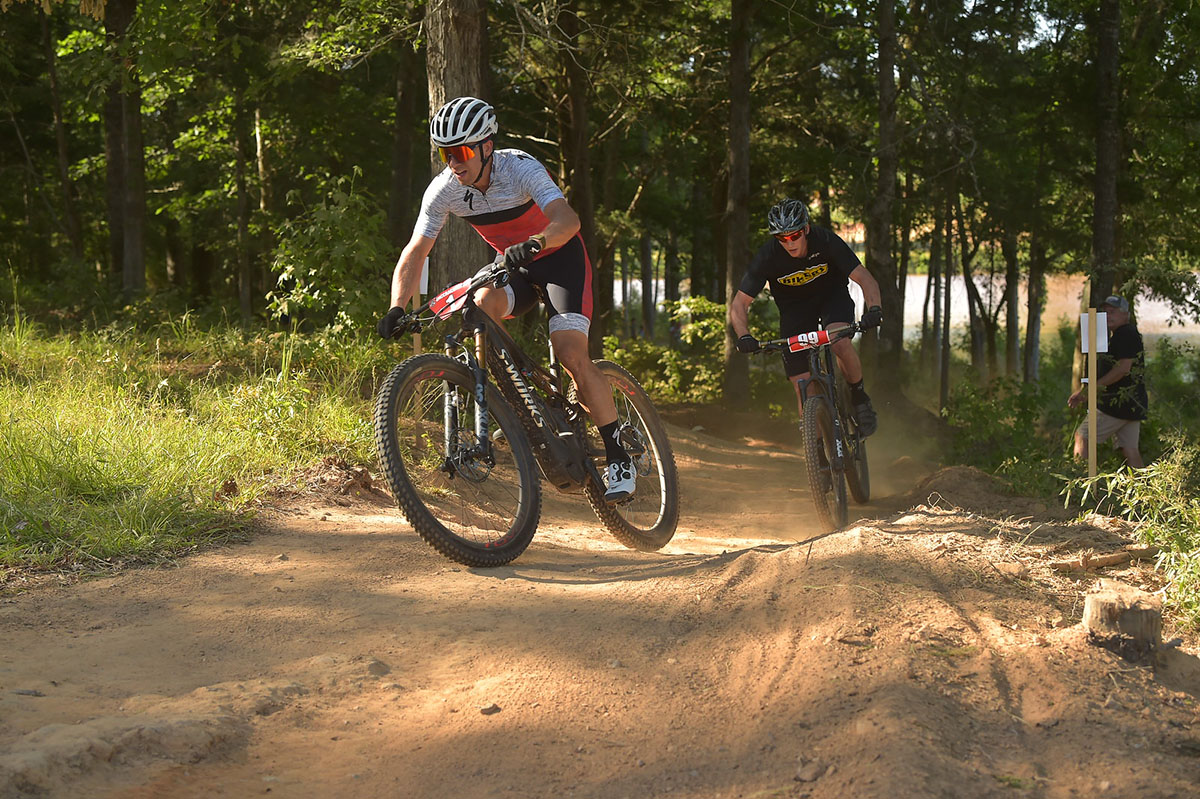 Racer Productions, Inc., producers of the 2020 Grand National Cross Country (GNCC) Series presented by Specialized, an AMA National Championship, is proud to announce that the upcoming Loretta Lynn eMTB race, Round 5 of the 8-round Specialized Turbo eMTB GNCC Series, will be also serve as the first ever FIM North American eMTB Championship.

The Loretta Lynn eMTB GNCC will be held on Saturday, August 1st, in conjunction with the 39th Annual Monster Energy AMA Amateur National Motocross Championship (August 2nd – 8th) at the home of country music legend Loretta Lynn in Hurricane Mills, Tennessee, the largest and most prestigious amateur motocross event in the world.

“We are thrilled to have the FIM North American Championship status at this round of eMTB GNCC racing,” said Carrie Russell, Racer Productions CEO. “The eMTBs have been a wonderful addition to the GNCC circuit, everybody has one. In one year we have doubled our entries and more than quadrupled the number of eMTBs onsite. The races are fun to watch and even more fun to ride,” continued Russell. “We’re proud to spearhead this new sport.”

The Loretta Lynn race will be broadcast LIVE on RacerTV.com, as well as televised on MAVTV in a 30-minute highlight episode.

The remaining rounds of the 2020 eMTB GNCC Schedule are:

The October 24 Ironman eMTB race is a rain date in the event a previous round is cancelled due to inclement weather. In the event there is no cancellation, a non-points-paying eMTB race will be held at the Ironman GNCC, with free race entry. The Ironman GNCC is historically the largest of the season, averaging 2,400 unique racers and well over 12,000 race fans.

“The Ironman eMTB race will be special too,” added Russell. “If we need it for a rain date we will have it. If not, we will have a free race for anyone who wants to come experience eMTB racing GNCC-style. We have 5 eMTB classes and want to give everyone a chance to come race with us.”

To register for the Loretta Lynn eMTB GNCC, as well as all GNCC races, go HERE.