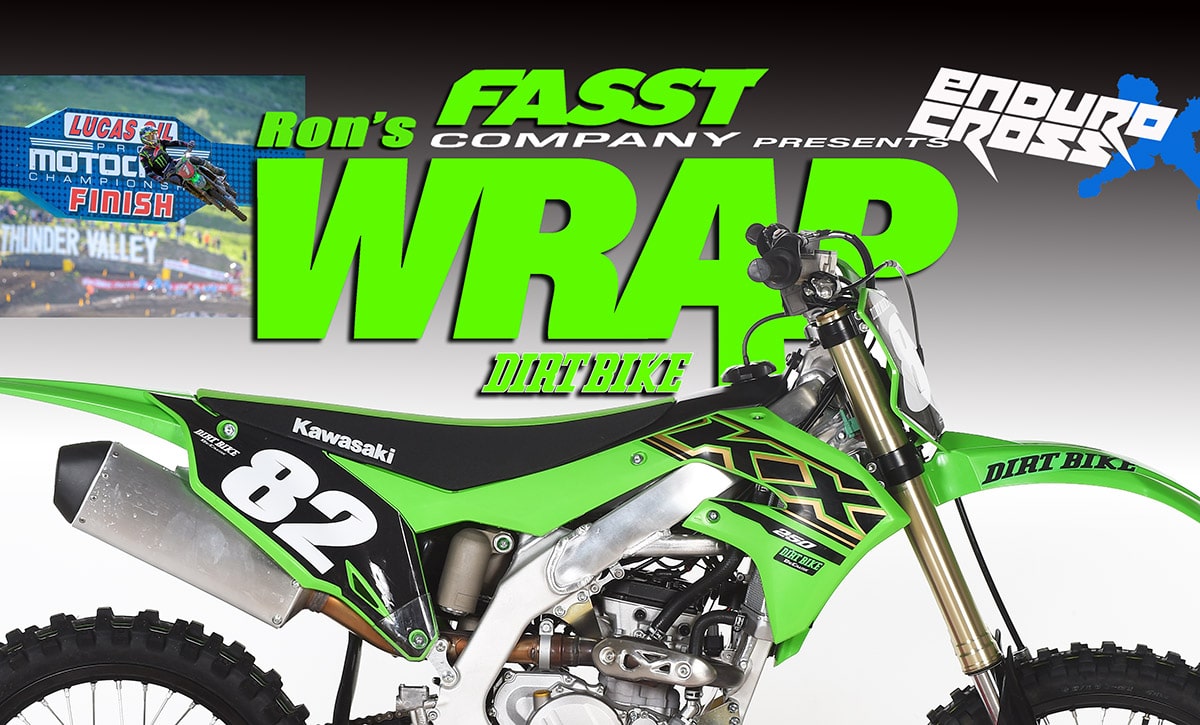 We’ve been living with the 2021 Kawasaki KX250 for almost a week now and love it more each day. Kawasaki took its time updating the 250 four-stroke, starting with a new head and valve train in 2020. Now the job is complete; the rest of the bike is all new. The chassis is more or less directly from the Kawasaki KX450, which was redesigned in 2019. The motor now has electric start and a new hydraulic clutch that uses a coned disk rather than coil springs. The motor also got a longer rod (no change to stroke). Even the top end was further developed. It was reconfigured with finger followers between the cams and valves last year, and now it gets a new port finishing process, new cam timing, a beefier cam chain and thicker cam chain gears. The piston is new, as well, meaning that last year’s model will go down in the books as a bike that had a one-year run.

Most of the top-end changes were designed to give the bike more low end. If you remember the reviews from last year, the KX had sacrificed all of its low-end power (which was the best in class in 2019) for peak power. The 2019 wasn’t a bad bike at all; it was the lightest of the Japanese 250s, but no one was happy that its former low-end power was reduced. The word on the street was that the Monster Energy Pro Circuit team continued to race the 2019 in Pro motocross. They apparently knew that another new motor was on the way, and didn’t want to invest in the 2020 motor if they would have to start all over again for 2021.

The electric start is a huge deal, of course. The bike gained weight, as expected. On our scale, the 2021 model weighs 228.7 pounds without fuel, which is 5 pounds more than last year. The 2020 Honda and Yamaha were 227 pounds each, While the Husky and KTM were 219 and 218 pounds, respectively. The Suzuki was 227. For 2021, the only other 250F that received significant change was the Yamaha. There’s a fair chance that when the smoke clears, the Kawasaki will be the heaviest of the year, if only by a pound or two.

We gotta say that we don’t care about the weight number. The new KX250 is everything we hoped it would be. First of all, it’s a rocket. Much of the low-end power is back. It’s still not as torquey as the 2019 version was, but it’s close enough. On top, the bike gained more power simply by revving further. The 2020 version was already the 250F-class king of the Pro Circuit dyno in terms of peak power. It produced 43.26 horsepower, which was a few tenths more than the KTM, Honda and Husky. We haven’t yet tested the new KX on the dyno, but according to the seat of the pants we know it makes considerably more on top. Unless Yamaha has something special in the works, Kawasaki will be the hands-down horsepower champion of 2021.

On the track, the new KX is very forgiving and easy to handle. Power is the most important factor here. When you roll on the power, you don’t always have to use the clutch to bring it up to speed. Then you let it rev and rev. Way up on top, the KX sounds a little raspy. That’s the way Kawasakis have been for years, but the motor still pulls super strong. Going up the big hill at Glen Helen is usually a struggle on a 250. On the new KX, you can pull at least one gear shift on the way up; maybe two.

The new clutch has a very light pull. That was the case last year, too, but the feel is a little different. When you release the lever, the clutch more or less locks in. It’s not grabby, but the period of engagement is shorter. Hopefully, this will result in longer clutch plate life. The previous KX could go through a clutch in a few hours. As far as suspension goes, we haven’t yet felt passionate about making any changes. We’ve ridden so far at Glen Helen and Perris on semi-smooth days and the bike felt excellent for our admittedly heavy riders (170 to 190 pounds). As we test in rougher conditions we will know more, but we know that the KX450 measures up well, and we don’t expect the 250 to be any less impressive. Check out the full test in the January, 2021 print edition of Dirt Bike. 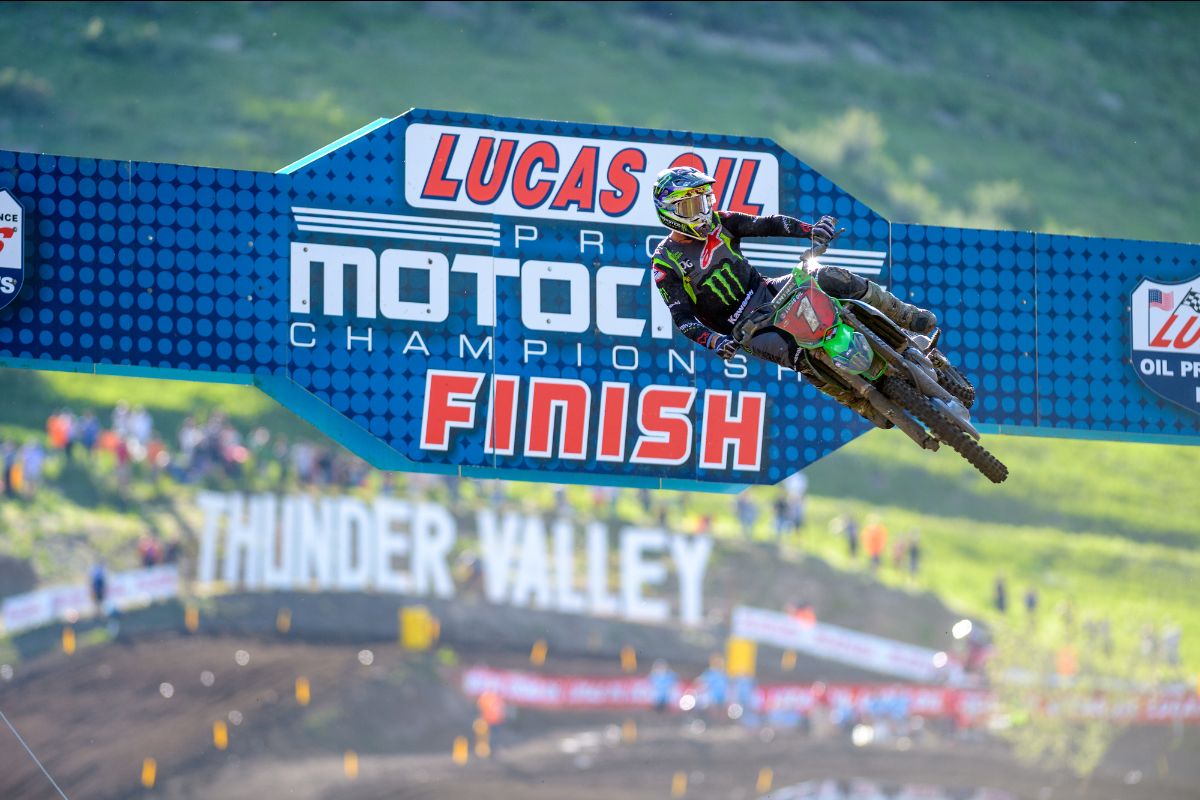 Thunder Valley National Motocross is this week and the 2020 Lucas Oil Pro Motocross season goes into the final stretch. No one will bet against Zach Osborne, but you gotta look at this as Eli Tomac’s home track. He lives at altitude and will have an adoring fan base. Here’s how the points look right now in the 450 class.

The 250 class is looking sweet for Dylan Ferrandis. There are two Martins behind him in the points, but only Jeremy is close enough to be a real threat.

There are the broadcast times. As usualy, Mav TV will present the first motos live, while NBC will have the second motos delayed. 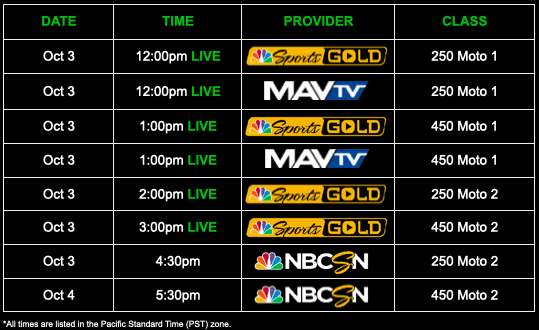 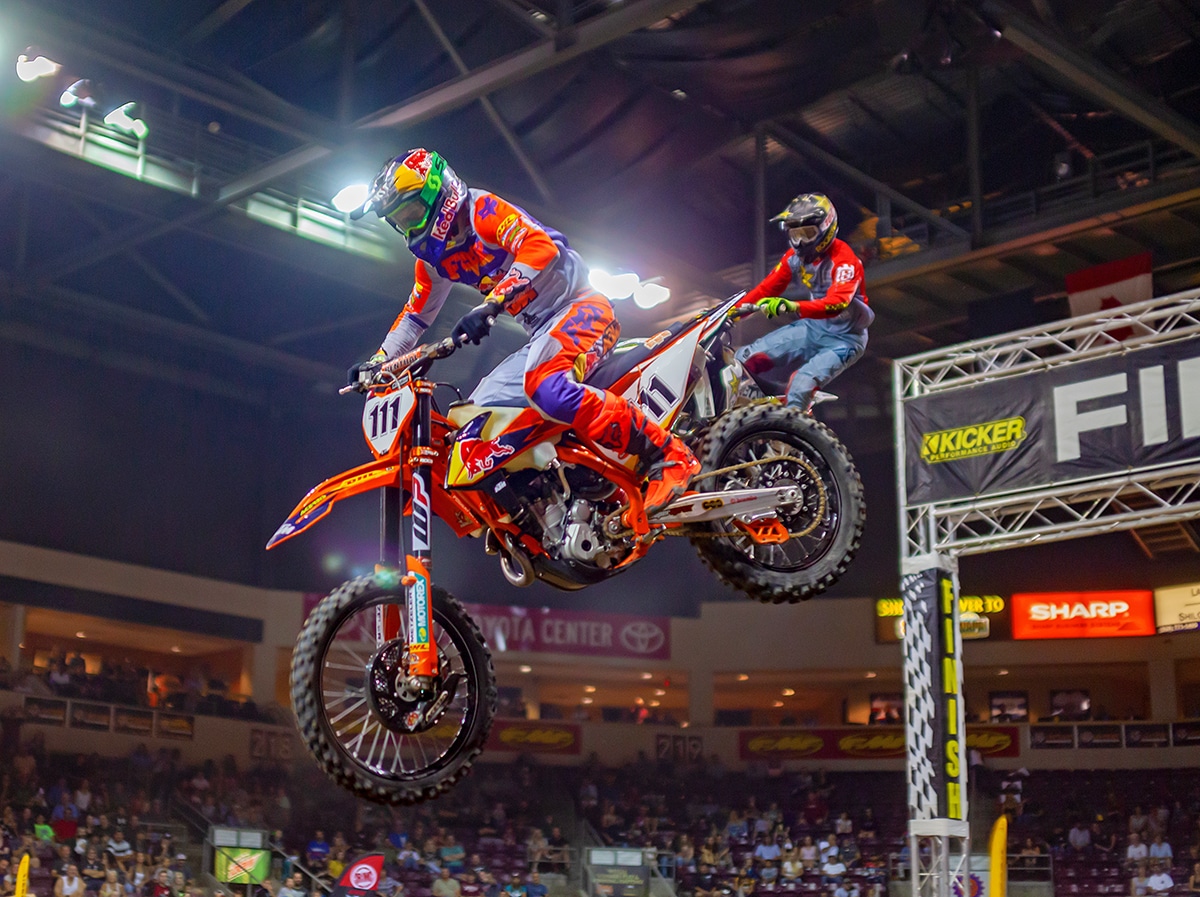 Taddy Blazusiak is coming to town this month for the six-round EnduroCross season! The band is finally getting back together, all on different makes. Colton Haaker is on the mend, Cody Webb is getting used to his new bike and Taddy will be tough, as usual. The first four events will be held at Glen Helen before a limited audience. If you want to be sure to get in, go to GlenHelen.com for tickets. They will go on sale later this week. The final two rounds will be in early November at Ford Idaho Center in Nampa, Idaho. Go to EnduroCross.com for attendance information, which also should be finalized later in the week.

National Hare & Hound has been excellent this season with privateers having a banner year. Right now, David Kamo holds a small lead over last week’s winner Dalton Shirey. Joe Wasson and Zane Roberts are in the running for the championship as well with only two rounds left. October is back to back racing for off-road guys across the country with a number of championships wrapping up.