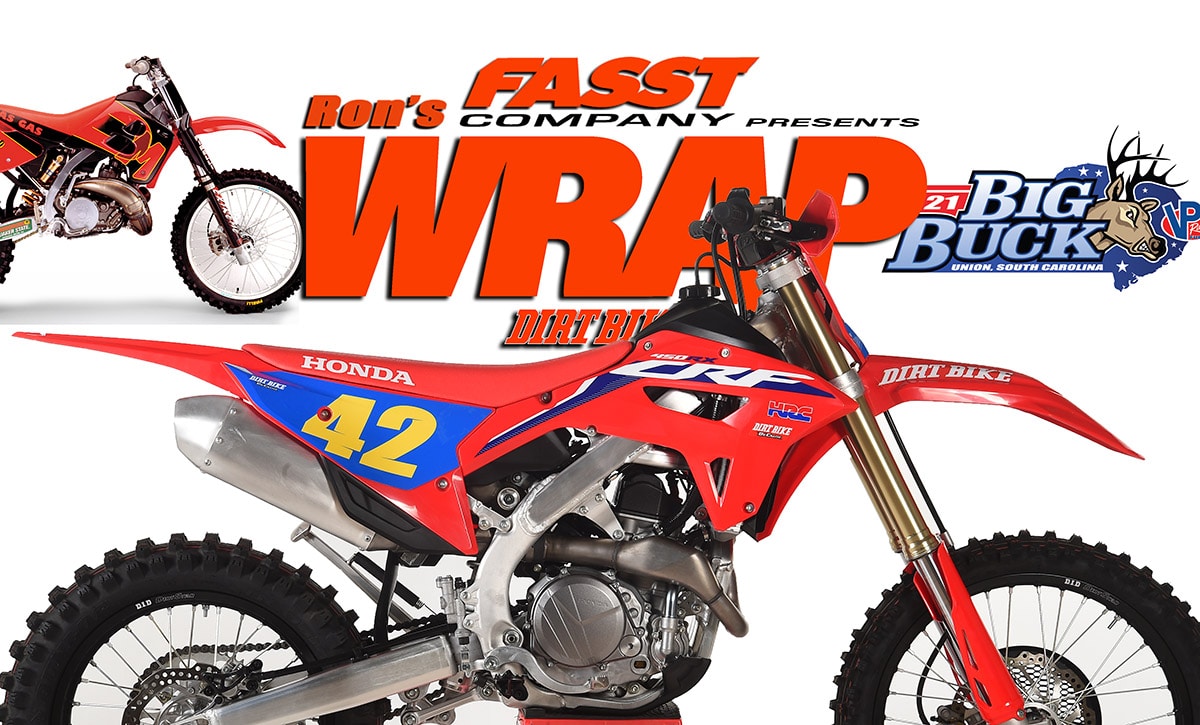 The Honda CRF450RX bike arrived a little late after the reception to the motocross version was less than what Honda hoped. Honda’s testing department came up with new mapping for both bikes, and now we have the updated CRF450RX off-road bike in the shop.

The CRF450RX is essentially the same motorcycle as the MX version, but with a number of off-road features:
Softer suspension: The RX has a 5.0 N/m spring in the rear and different valving. The MX bike has a 5.4. In front, the springs are 0.48 N/m as opposed to 0.50.
Mapping: The RX has three maps that can be selected through use of a handlebar switch. None of them are the same as those of the MX bike, although number three is the most aggressive and closely mimics number one on the CRF450R. As a side note, our test bike had the latest mapping update from Honda. If you have an RX, you can get the update through any Honda dealer. The RX also has three levels of traction control, all of which are different from those of the MX bike. Like the MX bike, it also has three-tiers of launch control.
Fuel capacity: The off-road bike carries 2.1 gallons, in a plastic fuel tank. The MX bike has 1.7 in a titanium tank.
Wheels and tires: The RX has an 18-inch rear wheel in back. Both ends have Dunlop AT81 tires.
Details: You get new handguards, an O-ring chain and lower final gearing (50-tooth rear sprocket vs. 49). The gearbox itself is identical on the two models.
You don’t get a spark arrester, a quiet muffler or California green-sticker certification.

The biggest news in the motor department is the new head with the center-port exhaust. This leads to a single exhaust system–no more twice pipes. The intake was rethought with larger volume between the filter and the throttle body along with re-angled injectors. The motor also gets a new clutch with larger surface area and hydraulic actuation. There’s a Nissin master cylinder on the handlebar connected to a Nissin slave on the left side of the case.

The frame was redesigned with most of the dimensions altered slightly; the head angle is more relaxed, the swingarm and wheelbase are shorter, although the distance between the swingarm pivot and the front axle is actually greater. All of the bodywork is changed and narrower–especially in the rear where there used to be two pipes.

The Honda makes a ton of horsepower, and it isn’t especially gentle. If you take it to tight, technical trails and ride at low rpm, the motor is lurchy and will occasionally flame out. But if you give it a little wide-open space, the RX stretches its legs and is an absolute blast. Its preferred environments are GP tracks, motocross-style off-road courses, open desert and the occasional two-tracker. None of that should come as any surprise. This is how the RX has been since its introduction. The difference is that it’s more manageable than before. Where the power delivery used to be intimidatingly steep right in the middle, it’s all much more spread out. It still makes as much power as ever on top–maybe more. But getting there isn’t quite as difficult. The motocross version quickly got a reputation for having an intermittent hiccup. That’s gone with the updated mapping. If you have an earlier R or an RX that does that, any Honda dealer can fix it for free. 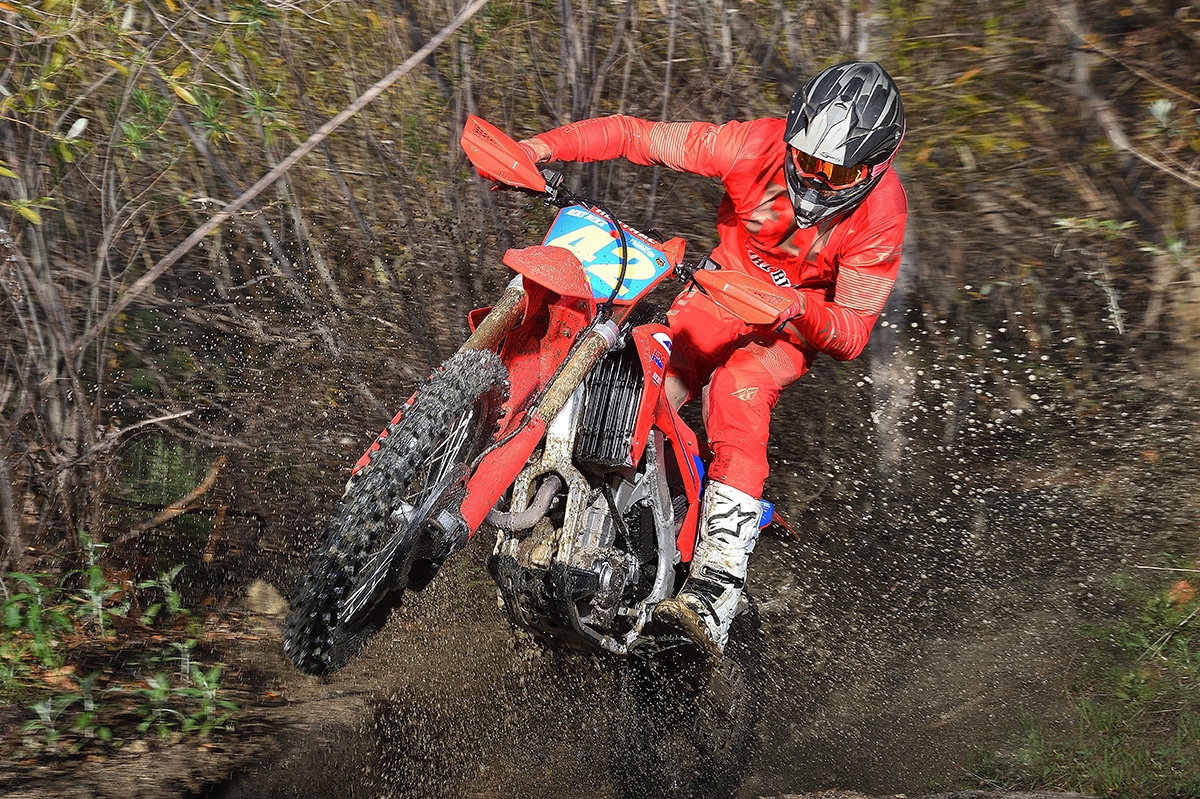 The bike has three maps that can be selected through a handlebar switch.  Map three is the most aggressive and the most fun in the open. It also has three levels of traction control. It’s not bad for rocks and gravel. For sandy hill climbs, on the other hand, it’s overbearing as if you’re dragging the rear brake.

By the way, we love the new clutch. This is a huge improvement. The previous generation clutch was a big handicap for Honda riders and has been since 2009. It had a hard pull, an inconsistent feel and would wear out quickly. New game. The hydraulic clutch has one of the lightest pulls in the 450 class and it never fades no matter how badly it’s abused.

The Honda is going to be a big hit in GP racing. It’s fast and it handles well. The only issue it might have in that environment is soft suspension settings. Last year the RX wasn’t far from the R in terms of set up. Now it’s softer, which means it’s great for light whoops and sweeping, third-gear runs through rocky off-road trail trash. Once you transition to a track, it can be overwhelmed by big jumps and high speeds. We’re still testing the RX and the full story will appear in the April, 2021 print edition of Dirt Bike.

I keep hearing that the new GasGas MC models from KTM are the first GasGas motocross bikes. Something about that didn’t sound right, so I culled the back issues. Sure enough Peta Murray and I rode a prototype MC 250 GasGas MX bike for the April, 1998 issue.

It was based on the enduro bike of the day, but with motocross suspension, more aggressive porting and a four-speed gearbox. The GasGas two-strokes of the day had a counterbalancer way before it was cool. This particular bike had the counterbalancer removed to save weight. It was claimed to weigh 213 pounds. We didn’t weigh it ourselves, but we said it was plausible figure. I’m not sure what happened to his particular bike. It might have been the one that Donald Upton rode back in the day, If anyone remembers the story better than I do, drop me a line at [email protected] 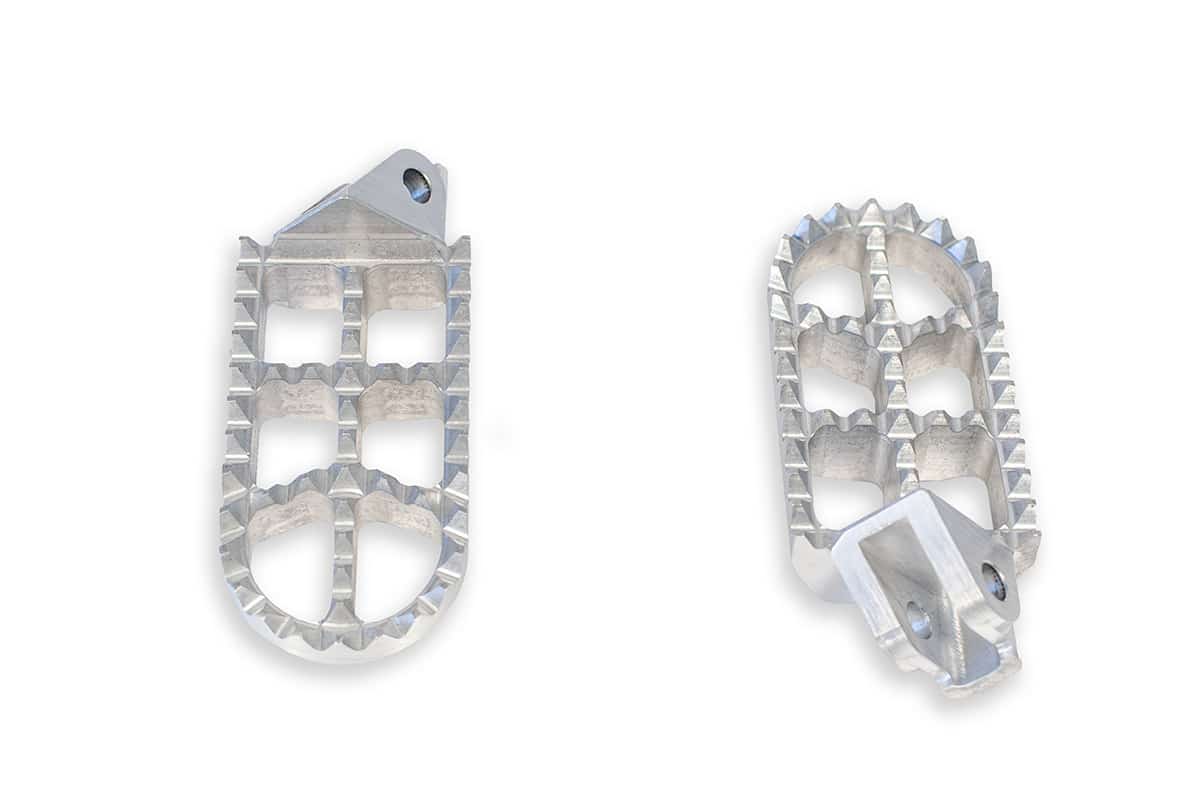 Darrell Contreras has been a friend of mine for years and he stopped by with come pretty impressive ADV products recently. Among them are aluminum footpegs for a number of adventure bikes; these are for the KTM 690 and Husky 701. I already have a set bolted on our test bike.  They sell for $199 a set. You can contact him here:

Round one of the 2021 GNCC series took place last week. The organizers sent us a breakdown of the attendance, which was impressive. 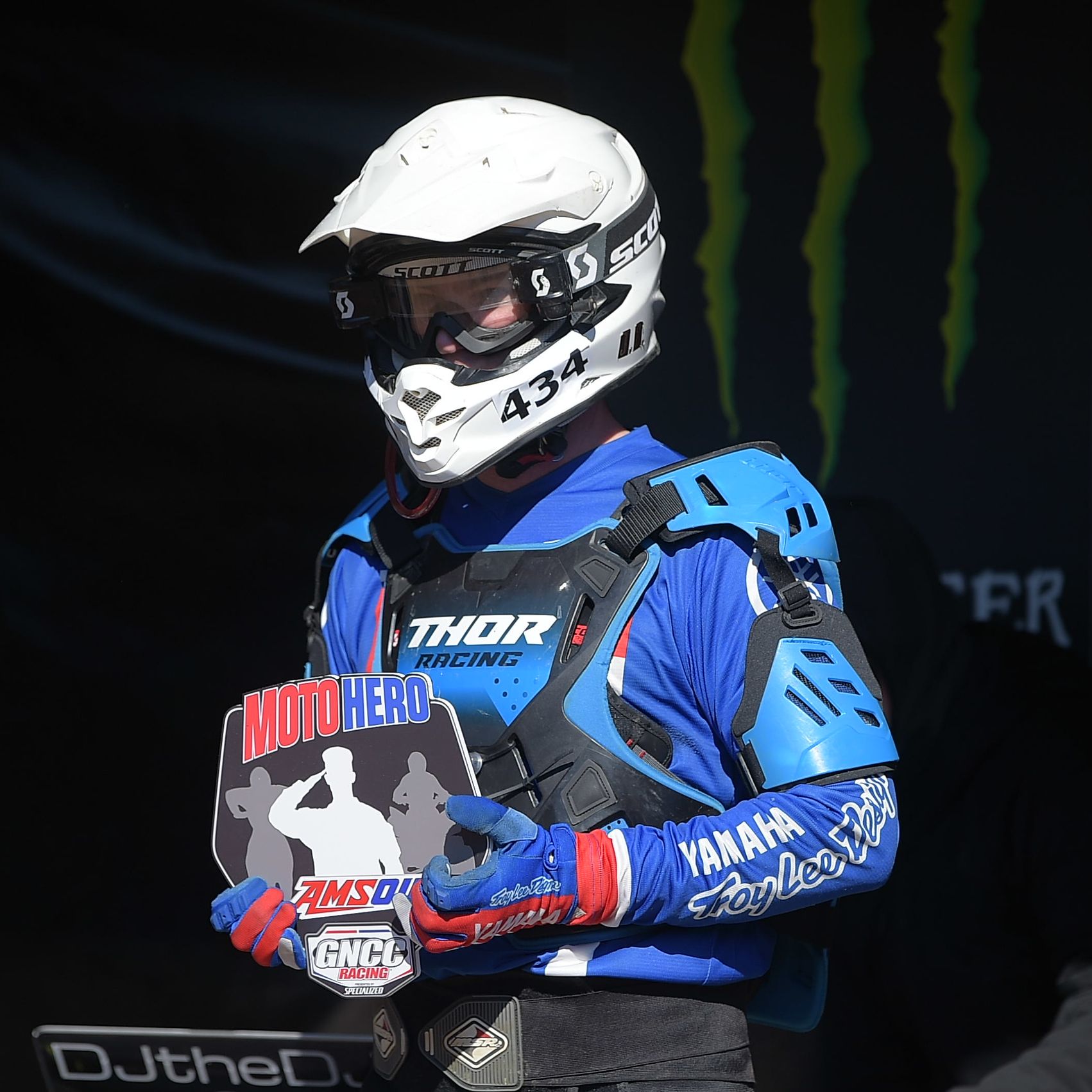 A new GNCC Moto Hero will be recognized at each event and will receive the official Moto Hero plate, Kanati Lite truck tires from GBC Tires, a $250 AMSOIL shopping spree and a commemorative American Flag courtesy of Columbia Flag and Sign company and a $200 Gift Certificate for their store.

Jason Flynn was nominated and awarded the AMSOIL Moto Hero at round one. Flynn served in the United States Marine Corps, both in active duty and in the reserves for 20 years. He was deployed five times to three different continents including Iraq where he was assigned to units in Ramadi and Fallujah. Flynn raced Motocross and was named by Jason Weigandt in 2003 as “The Flying Captain,” but in 2004 the USMC moved him to Oklahoma and then onto deployment. After retiring from racing for 15 years, Flynn has reemerged to enjoy the GNCC Series. Flynn raced in the Super Senior B (45+) class at and would bring home the class win. Flynn was awarded a $250 AMSOIL Shopping spree, Kanati Lite Truck tires from GBC, a commemorative American flag courtesy of Columbia Flag & Sign Co. along with a certificate from their store. 100% Goggles also donated a pair of goggles and ARMA will be sending a Black Edition – ProKit full of ARMA supplements and gear.
Thank you for your service Jason Flynn!