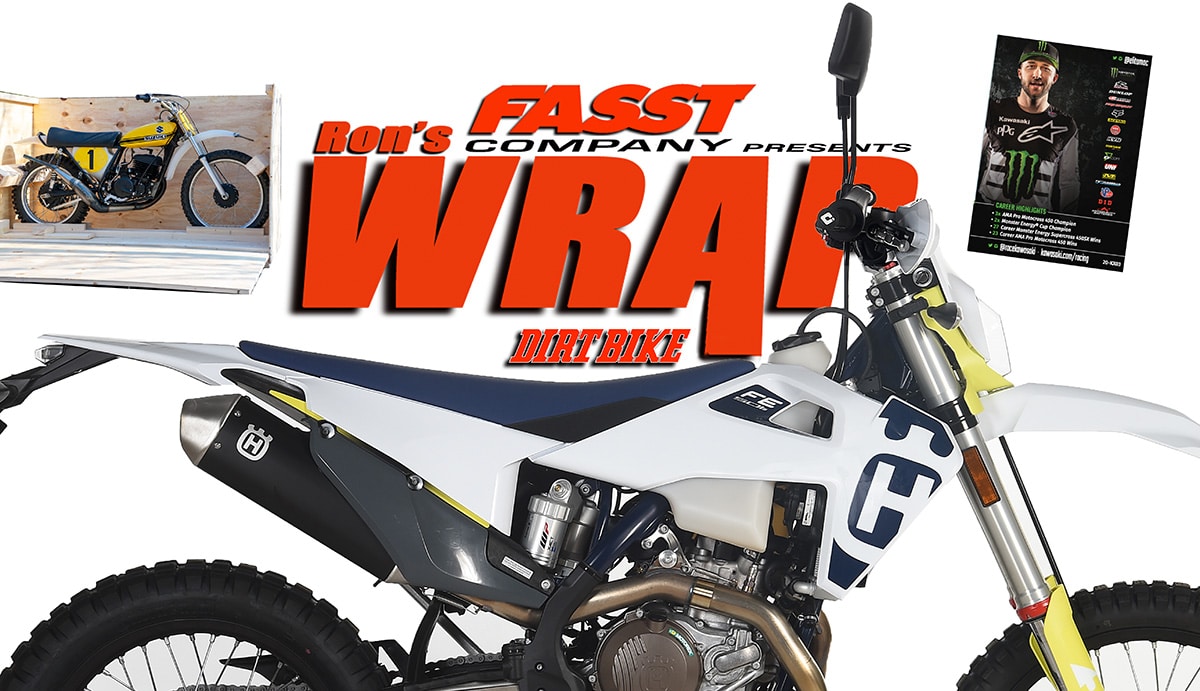 Last month we got to ride the 2020 Husqvarna FE350S dual-sport; now the FE501S is center stage. These are the only two dual-sport bikes in the Husqvarna line for 2020 unless you include the massive 701 Enduro. The FE250 and FE450 have been dropped for now. The addition of an “S” on the end of the model name is necessary for this year because there is now a dedicated off-road version (the FE501–no”S”). 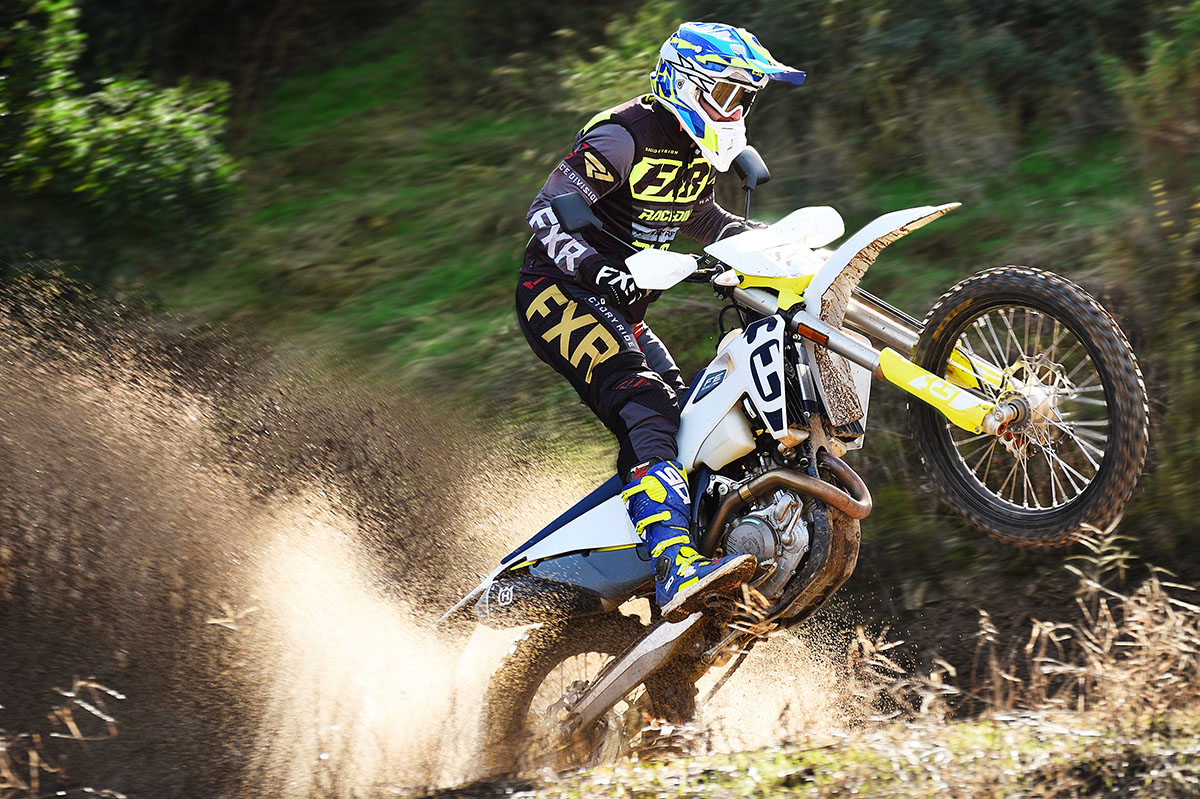 For 2020, the Husky 501 has so many changes it’s almost a completely new motorcycle. This comes just three years after the last major redesign. The most obvious of these is a new look. The bodywork is pretty much straight off the 2019 Husky FC450 motocross bike. So is the frame, which is more rigid in all planes. The motor itself is new, too, although it uses the same basic design and layout. The head is much more compact, again taking inspiration from the Rockstar Edition. The biggest change in the lower end is apparent if you look at the left side of the motor–there’s no longer a provision for the addition of a kickstart lever. The lever and shaft had already disappeared, but Husqvarna engineers maintained the polite fiction that people might want to add the kickstarter after purchase. That pretense is now gone.

On the Dirt Bike digital scale, the 2020 Husqvarna FE501S weighs 240 pounds without any fuel but with both mirrors. That’s amazing; it’s 8 pounds lighter than the 2019 model, which was already incredibly light. For other comparisons, the Honda CRF450L dual-sport weighs 277 pounds without fuel. The Husky comes in around the same weight as full-race motocross bikes like the Yamaha YZ450F, the Honda CRF450R and the Suzuki RM-Z450. We’re not quite sure where the weight was lost, but the fact that the Husky is light is obvious. Everything works better when the weight comes down; the bike stops faster, accelerates harder and gets better traction.

Down low, the power is awesome. It pulls from the basement up about like you would expect from a 500cc single, but it’s so quiet that you don’t always think it’s pulling.  With the Husky, you get much more wind noise than motorcycle sounds. You pay a price for the super quiet exhaust note in revs and top-end power, though. After all that low end power comes a fairly flat mid range and an even flatter top end. I know the knee-jerk reaction will be to  replace the pipe looking for more power and maybe pull the reed valve out of the intake boot. It won’t work. With the stock mapping it will actually run worse. If you know how to reflash the stock black box, good for you, but it’s designed to be tamper-proof.  Many riders will replace the stock ignition. It’s a can of very expensive worms. In stock form, the greatest thing about the FE is the fact that it runs super clean. No flame-outs or backfires. That’s a true miracle for an EPA-approved dual-sport bike.

Before spending a dime on the motor, you should budget in some more aggressive tires. Continental TKC80s aren’t very good in soft dirt. The rear is better than the front. We didn’t waste time in replacing the tires with full knobbies–and installing rim locks. Then we ran into an issue with the license plate bracket. As soon as the higher-profile rear knobby caught the rear fender extension, the whole thing was torn off. We lost the license plate somewhere on the trail, and that’s not something anyone wants. If you find a Husky distributor plate in the high desert, please drop it in a mail box. The guys at Husqvarna are pretty mad at us. 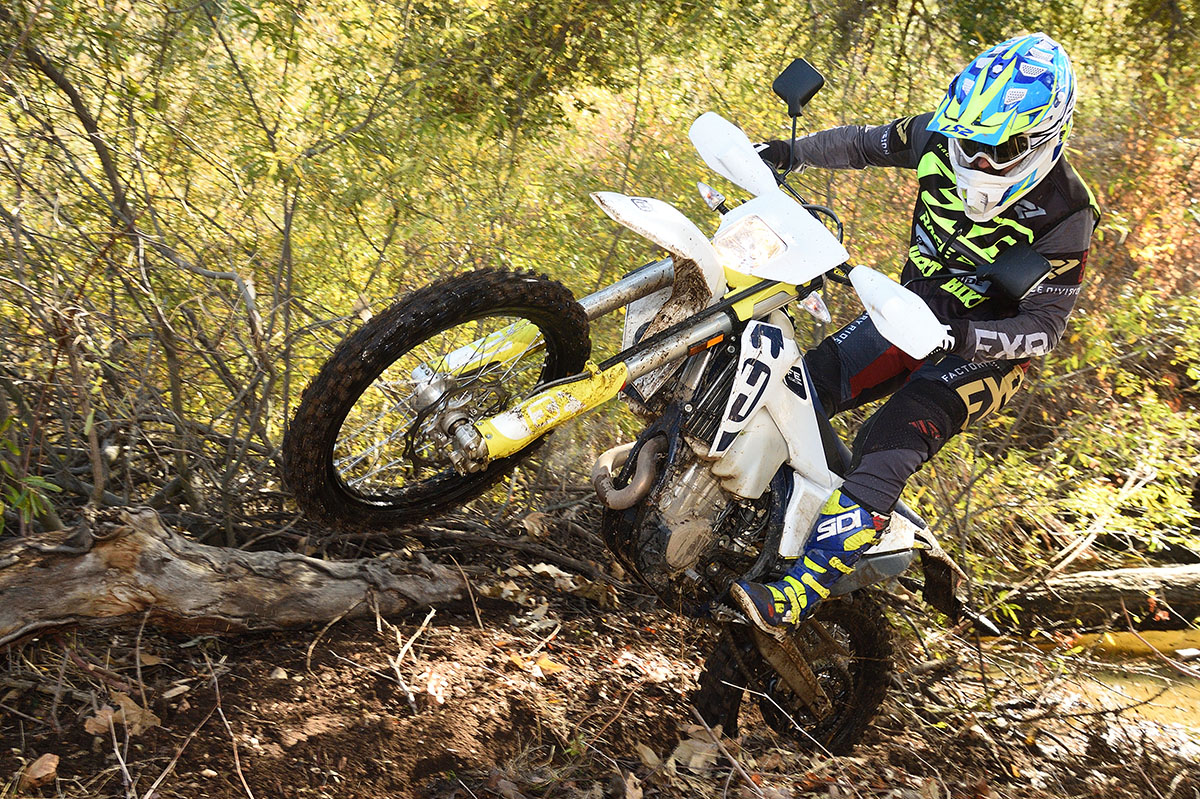 If you like high-speed off-road riding, you might also want to stiffen up the suspension, the stock XPLOR coil-sprint fork are pretty soft, although they are excellent for low speed trail riding and technical stuff that we usually find ourselves doing. This is an incredible bike, and Husqvarna knows it. The price is $11,499. You just have to cowboy up and accept the fact that good motorcycles are expensive. The full test will be in the March 2020 print issue. 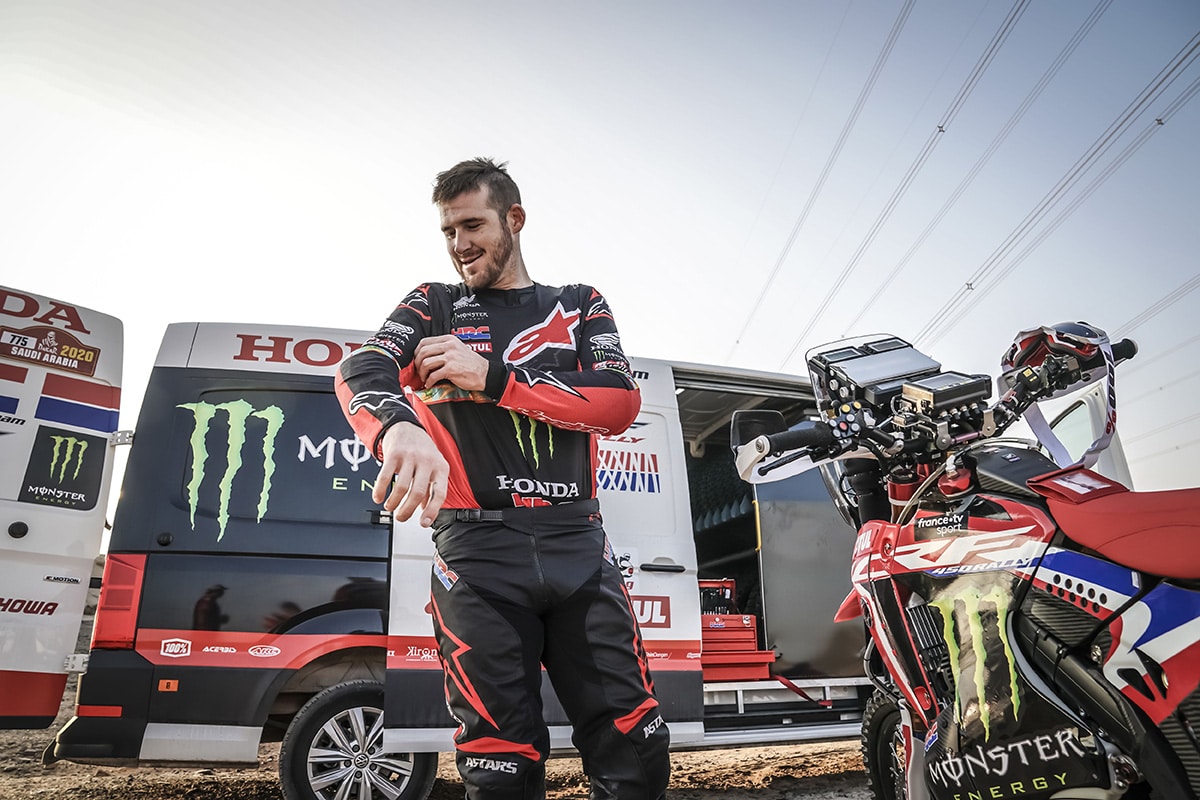 All the big rally teams are in Saudi Arabia, ready to open the Dakar Rally Sunday. The 42nd edition of the rally will be run over 12  stages, covering over 7800 kilometres. This year two of the most important teams have Americans–Ricky Brabec on Monster Energy HRC and Andrew Short on Rockstar Husqvarna. Brabec came very close to winning last year. With two fairly routine stages to go, he was in the lead and his bike broke down. Short actually did win a rally in 2019, so now he has to be considered a favorite as well. 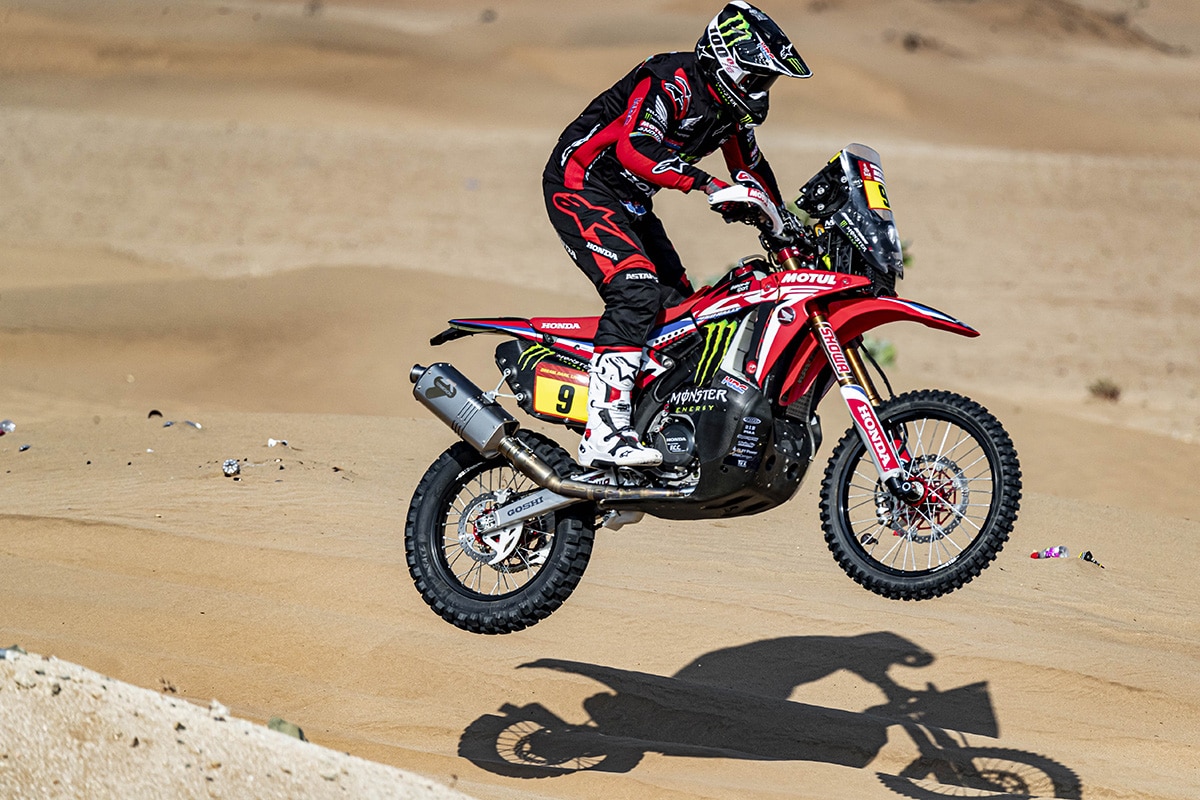 A Honda press release had this quote, allegedly from Ricky Brabec. I’m fairly certain it was really written by some press officer within the team–it sounds nothing like Ricky, but that’s what makes it fun: “There are a few days left before the great battle commences. I am glad to be here, in a new country. Everything so far has been going well, so I just trust that the good feelings will transfer onto the track and hopefully we will be able to get good results in this 2020 Dakar Rally.”

Andrew Short probably did say this, which is from a Husqvarna press release:  “I think everyone is really excited to be here in Saudi and get racing again. The atmosphere inside the team is excellent and we’re all looking forward to the event now. My feeling on the bike is good, I did have a little crash yesterday but luckily didn’t do myself, or the bike, too much damage. People have been saying how soft the terrain is, but for me desert is desert, no matter where you are in the world. From a sporting perspective, racing here in Saudi Arabia for the first time feels great and I’m honored to be a part of this latest chapter in the Dakar. It’s going to be a massive challenge and a very long race, but right now, I just can’t wait to get started.”

Terry Good just acquired what I think is the ultimate works bike for the International Motorcycle Museum. In 1972, the Suzuki RN72 was a 372cc factory-built racer that weighed 180 pounds and was considered such an unfair advantage for Roger DeCoster that the FIM enacted a long list of rule changes that effectively made the bike illegal in 1973.  About 25 years ago, Terry also restored the bike’s 250cc bookend, the RH72, which Joel Robert rode to the 1972 250cc world championship.  The Open-class version was easier. All that work had already been by Clive Bussey in England. Terry had been negotiating for the bike for years, and Clive finally relented and shipped the bike to the U.S. in preparation for an official museum dinner on July 11, 2020 in Chicago. That event will be a fund-raiser that is hoped to get the ball rolling for continued operation of the museum. That museum will be like Disneyland for any fan of the works bike era in motocross. The collection has over 100 historically verified championship motorcycles, both from the U.S. and Europe. Until now, the bikes have been locked away and unaccessible to the public. Terry’s hope is to make the museum self-sustaining in the years to come. If that appeal to you, then make you plans to be in Chicago in July. You can get attendance information on the International Motorcycle Museum Facebook page. 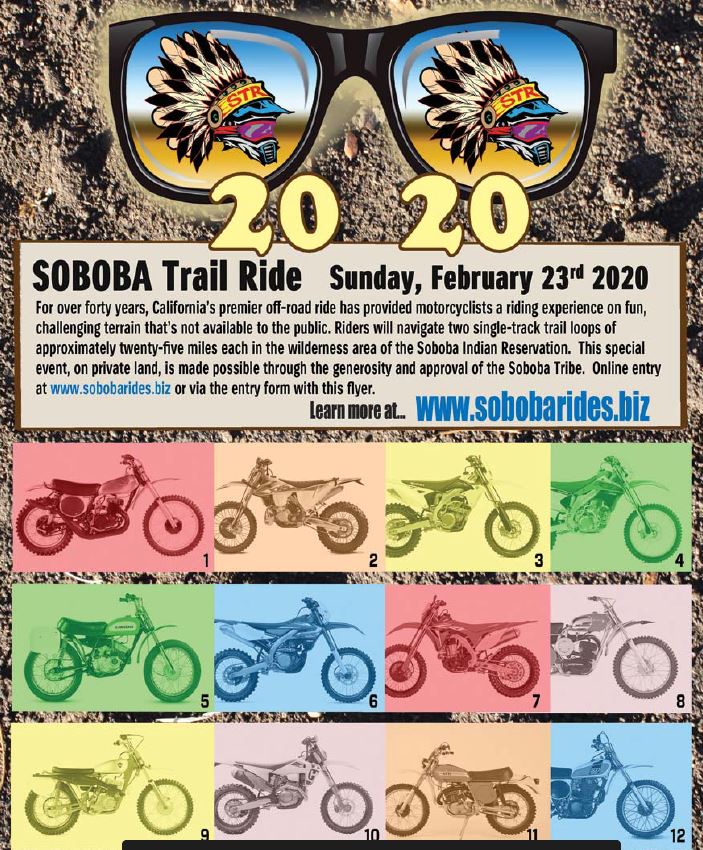 The Soboba Indian Reservation will be hosting its trail ride again. It takes place on February 23rd this year and it’s always pretty good–especially if it rains. You can enter by going to Sobobarides.biz.

Team Kawasaki and Monster Energy/Pro Circuit/Kawasaki will be giving away team collector cards for the 2020 season in lieu of the traditional posters. Fans attending the Monster Energy Supercross Party in the Pits, AMA Pro Motocross pits or Supercross Open House events at Kawasaki dealerships will be able to collect these cards and maybe get them signed.

“Creating this set of cards is a fun and a new approach to showcase our riders and the teams to the fans,” said Chris Brull Vice President, Marketing & Racing. “As an homage to the classic HI FLYERS set from the early 1990s, we are looking to build fan excitement as they collect a complete set of the cards.”

The 2020 complete set includes individual cards for each Monster Energy Kawasaki and Monster Energy/Pro Circuit/Kawasaki rider as well as Kawasaki ambassador and 7-time supercross champion Jeremy McGrath. There are 17 additional limited-edition cards that will be handed out at different events throughout the year. Each limited-edition card will be designated to a specific race.

The Supercross season starts tomorrow at Angel Stadium, Anaheim, California. To celebrate the start of this Supercross, Alpinestars has launched the Limited Edition ‘Anaheim 20’ Tech 7 boot and S-M8 helmet. Here’s what Ashley at Alpine Stars says about them.

The Tech 7 boot is an advanced and protective boot that incorporates innovative materials and technology in a streamlined design for a lighter, more anatomically profiled performer. The ‘Anaheim 20’ is equipped with all of the performance properties of the Tech 7 in an eye-catching fluo yellow, gray, white and turquoise color scheme, as worn by Cooper Webb, Eli Tomac, Jason Anderson, Justin Barcia, and over 30 riders at the event, allowing Supercross fans to wear the same boots on their local track as their heroes.

The ‘Anaheim 20’ boots are complemented by the ‘Anaheim 20’ S-M8 helmet, Alpinestars lightweight motocross helmet.
Designed to offer riders the most advanced, protective and performance enhancing helmet possible with excellent ventilation, comfort and a light weight, the Supertech M8 draws on Alpinestars depth of experience in world class innovation across all motorsports and its deep-rooted commitment to motocross. The S-M8 is a helmet which allows riders to push the limits of performance, benefiting from confidence inspiring safety technology, reduced weight and a supremely well-fitting and ultra-ventilated construction for optimized comfort while riding.

The ‘Anaheim 20’ boasts all the technical innovations and design features of the S-M8; A-head fitting system, patented visor release system, MIPS, emergency release system, wide aperture; in the fluo yellow, white and turquoise styling that is guaranteed to stand out from the crowd.