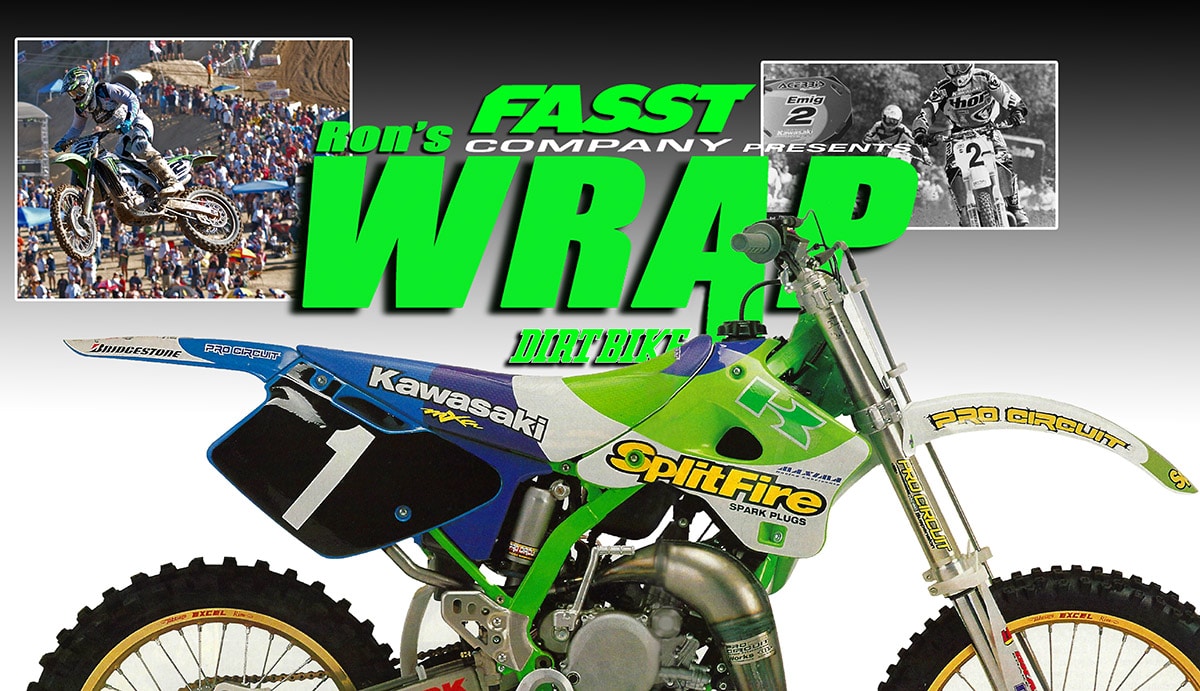 To keep from going crazy without racing, I’ve occupied myself by looking back at years past and old issues of Dirt Bike. I’ll always remember the July, 1995 issue for two reasons. One: it had a truly geeky looking photo of me on the cover. Two, I got to ride the Team Splitfire Pro Circuit Kawasaki KX125. I remember loving it, which was a big deal because the stock KX125 was a very hard bike to love back then.

Pro Circuit was a pioneer in the satellite factory team movement. It started in 1991 as a Honda-supported effort with one of the early outside sponsors in the motocross world: Peak antifreeze. It turned out that Peak never really provided as much support as people thought, but Mitch Payton made it all work to the tune of three regional Supercross championships with Jeremy McGrath and Brian Swink. In one of the greatest bonehead moves in racing history, Honda dropped support of the team in 1993. Pro Circuit was forced to go to Kawasaki, which had the slowest production 125 of the time. Again, Mitch made it work, with Jimmy Gaddis earning a 125 West title that year. By 1995, Pro Circuit was the team to beat once again, and Splitfire came to the table with sponsorship. The team never actually used the product, but the name was displayed prominently in chrome. That look, by the way, didn’t last long because it was way too expensive and didn’t last long. The main riders in 1995 were Ryan Hughes out west and Mickael Pichon in the east. Pichon won the East title, but Hughes ran into a roadblock in the form of Damon Huffman out west.

The Pro Circuit Kawasakis were built in the Pro Circuit race shop in Corona, California–not the one they have now, but a few blocks away near the present location for Bill’s Pipes. They had to start from scratch because the production bikes got new cases, port­ing, gear ratios, a shorter intake, new head, pipe and a smaller carb that year. “We were scratching our heads when we got the new bikes,” said Chad Watts, Hughes’ long-time mechanic. “It only took two or three cylinders to get a good outdoor setting, but indoor settings were tougher. We had good bottom and mid but didn’t have much on top. It took a few dyno nights and days of testing to get the top back.”

At the time, Mitch insisted that customers could always buy what the team ran. Pro Circuit reshaped the transfers and exhaust and decked the cylinder. The head was recut to fight detonation and make for slightly higher compression. The stock 35mm PWK Keihin was bored to 36mm, which is what came on the ’94s. The carb was also shortened, which called for plugging the choke circuit, and a sleeve was added to the intake bell so that the stock airbox boot could be retained. Watts said, “I don’t know how many people came up to us last year and told us that our carb was falling off. We had fun with it at Southwick, telling people we did it to get more air into the motor. By the end of the year, we would just say thanks and go on with our business. We tried a 38mm for motocross, but the 36 worked better.” Pro Circuit also lapped the gears to the shafts, as first-gear seizures had occurred on some production bikes. In many races, an off-the-shelf pipe and silencer were used. The frame was reinforced around the footpeg, top shock and linkage mounts. Tabs were welded on for a glide plate, and several welds were gone over for  more strength. Watts said, “Mickael is pretty easy on frames, because he’ s so light. He can go six race s on a frame, but Rhyno goes through a frame every two races.”

All bolts and axles were titanium. The stock pegs and linkage pull-rods were replaced with billet Pro Circuit pieces. The P.C. dogbones were 1mm shorter, which jacked up the rear end 5mm. In 1995, AMA rules for the 125 class required near-stock suspension. The team ran 92mm of sag on the revalved KYB shock, which was fitted  with a 5.3kg spring. Bones Bacon revalved the shock and fork, and Pichon ran a 0.42kg fork spring for SX. Stock hubs were used with high-grade spokes and EXCEL rims. On really hard and slick surfaces, the team used a 2.15-inch rear rim for a bigger footprint. Braking supplied the oversized rotors (260mm front and 230mm rear, which was considered large at the time), billet caliper carriers and pads. The finished product weighed 208 pounds.

I remember thinking that the bike felt like a big-bore. We had tested a number of 139cc kits at the time, and the KX had a lot of the same characteristics. It was all mid-range and didn’t rev especially high. That was appropriate for a 125 Supercross bike of the day. They needed immediate response right out of the corners. Jumps weren’t as standardized as they are today, and in the 125 class, it wasn’t uncommon for only half the field to be able to clear something on any given track. I loved the motor, though. I thought it was much easier to use than the stock Kawasaki’s. Unlike the 250Fs of today, this wasn’t a bike that had to be rebuilt every race. It really was available to the public and practical for the average Joe.  The suspension, however, was the opposite of friendly. This was probably one of the first bikes that I rode with full-Supercross suspension. Today, we expect SX suspension to be stiff and inappropriate for outdoor tracks. Back then, it was just dawning on me that I didn’t go fast enough or jump far enough to make the shock and fork move, despite outweighing Pichon by 20 or 30 pounds. I’m not sure what would happen if I got to ride the exact same bike today. To be honest, I think I would still love it.

Per prior RLT Competition Bulletin 2020-2, all motorsports events scheduled thru the weekend of April 25/26 for the Loretta Lynn, GNCC, ATVMX and Pro Motocross programs were postponed.

No further postponements are announced at this time. However, the affected race schedules remain dynamic and fluid and are subject to change. Transparency in the rescheduling process is important to our race community. Accordingly, the current status of each race schedule follows:

In the event it is necessary to postpone the Pro Motocross schedule further, it will not be postponed past September 12, 2020. Although no Pro Motocross event is scheduled for that date at this time, the series reserves the option to use this date if necessary, but in no event will the series extend beyond this date.

The Area Qualifier and Regional race schedules are complicated and have been drastically altered by the national crisis. MX Sports and AMA have developed several scenarios to reschedule the program and will issue a video announcement explaining the various options. Although no decision has been made at this time, it is important that the race community be made aware of the decision-making process.

The next scheduled GNCC event is set for May 2/3 in Somerset, PA. Although it is highly unlikely that this event will proceed as scheduled, it has not been postponed at this time. In addition, the Gladiator scheduled for May 16/17 in Bowling Green, KY, has been canceled by the property owner due to COVID-19 concerns. It is possible that a GNCC will be held on that date but at a different location TBA. A decision on both dates (May 2/3 and 16/17) will be made at a later time.

As a result of previous postponements, GNCC events will be held on July 11/12 and November 7/8. In addition, GNCC is working with the Full Gas Sprint Enduro to determine if their event previously scheduled for June 13/14 at Harleywood in Bristol, VA, can be moved to July 4/5, allowing GNCC to hold an event on June 13/14 at a location TBA. These dates were not part of the original GNCC race schedule. Accordingly, the tentative dates for the remainder of the GNCC schedule are:

Although 11 dates are listed above, no more than 10 events will be held, and a final schedule will be issued as soon as it is feasible to do so. The purpose of reserving these dates now is to allow the GNCC race community to plan accordingly.

About the Race Leadership Team:

The RLT consists of representatives from the AMA, MX Sports and MX Sports Pro Racing. The RLT will reconvene next Monday to review the race schedules, making adjustments as needed, and will work with event organizers to reschedule events when possible.

The RLT continues to urge racing families to use common sense: 1) wash your hands often; 2) avoid shaking hands or coming into close personal contact with others; 3) cough into your elbow; 4) if you are sick, stay home; 5) if you are really sick, go to the hospital; and 6) don’t panic.

The health, safety and welfare of our riders and their families remains paramount, and we will keep our race community apprised of all further developments.

Tomorrow, April 11 at 9:00 a.m. EDT, the Youtube channel for the Lucas Oil Pro Motocross Series will premier the 1996 250 class motos from Broome Tioga and Steel City. If you saw the 2013 Millville 250 class that was shown last week, you know the format: full motos that were assembled for a single show. I’ve heard that fans have organized watch parties on Facebook and other live-stream apps. 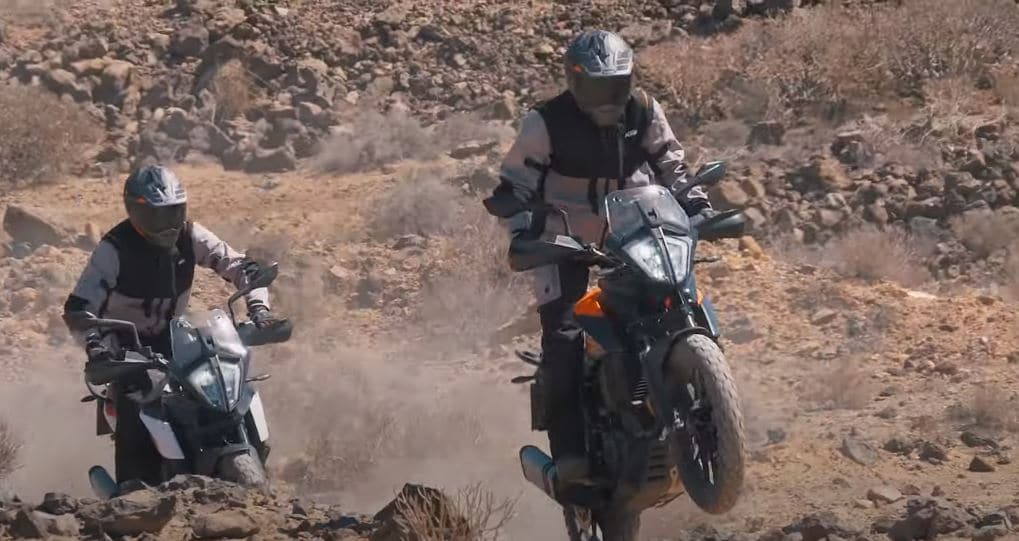 In case you were wondering what happened to the KTM 390 Adventure First Ride was promised last week, I have to admit that I screwed up. There’s an informal embargo on the U.S. press. We aren’t supposed to release any riding impressions until April 15. There was already a press introduction to the rest of the world press, which had no such agreement, so if you’re Jonesing for info, there are a number of riding impressions and videos out there, including a KTM-produced vid you can get by clicking on the image above.

The Glen Helen National was fun and I miss it. This was 2009 and Ryan Villopoto’s first ride in the 450 class outdoors. He crushed it.  Then a knee injury took him out at Hangtown, and that was it. Chad Reed would go on to win the title that year.

As a big fan of off-road riders who were brave enough to tackle the outdoor Nationals, I loved Ricky Dietrich’s 2009 season. He got a fill-in ride on team Kawasaki and did amazingly well, finishing in the top 10 in most rounds.