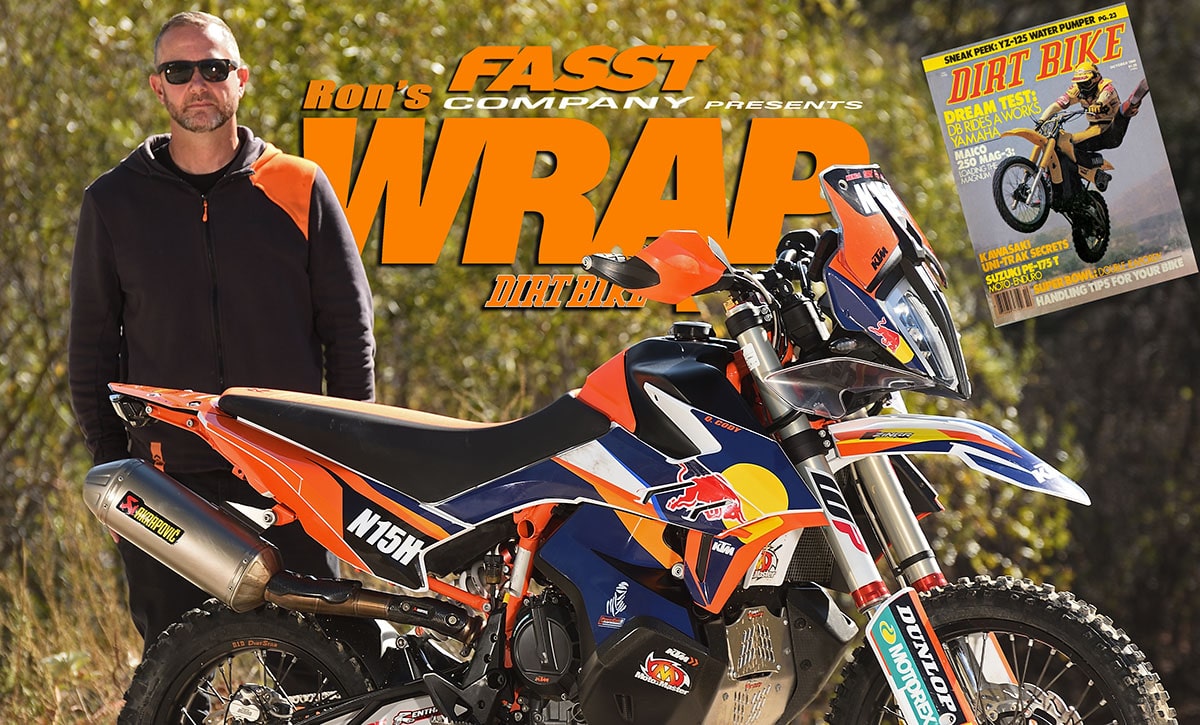 The KTM 790 Adventure has been replaced by the KTM 890 Adventure for 2021. Don’t panic; it’s essentially the same bike with more of everything. KTM has been testing the new bike right under our noses for months now with Quinn Cody in the National Hare & Hound series. That either means that the 890 is incredible or that Quinn is incredible. Probably both. This week, I got to ride it briefly and that was all I needed to understand how Quinn does what he does. His bike is a pilot-production test unit, which means it’s essentially what KTM plans to sell to the public as the limited-production 890 Adventure R Rally Edition.

There are a number of differences between the limited edition version and the standard one, including upgrades in suspension and an Akrapovic exhaust system. Additionally, the 890 differs from the 790 in a number of ways beyond displacement. KTM has once again rethought traction control to be more effective off-road. Quinn actually races the bike with traction control turned on at its lowest level. The race bike also has a bunch of obvious modifications, such as a carbon-fiber crash guard, an Enduro Engineering skidplate and a  Scott’s steering damper. The stock bike has dual rotors for the front brakes. Quinn removed one of the rotors and installed a caliper off a Supermoto bike. “That took a lot of weight off the front end and eliminated some headshake,” he reported. “Overall, though, the single biggest improvement is running good off-road tries.” He uses Dunlop MX53s with mousse inserts.

When I rode the bike it was a quick thrill ride across wet fire roads. The traction was almost too good. A short blip of the throttle had instant eye-opening results. Usually, when you ride a preposterously over-powered motorcycle like this in the dirt, you never get to feel the bike’s true acceleration. Either the wheel spins wildly or traction control steps in to calm things down. In this case, wheelspin was minimal and traction control was imperceptible, so opening the throttle on the 890 was like being strapped to the nose of a missile. You really had to be careful where you were pointed.

Beyond the horsepower, the most striking aspect of Quinn’s bike is the suspension. You don’t get the mushy feel or the extreme fork dive that characterizes big, heavy bikes. In the course of the hare-scrambles season, the techs at WP made a number of changes to dial the 890 in, but the suspension components themselves are the same as those that come on the Limited Edition 890 Adventure R Rally. Just for kicks, I took the bike for a lap around Glen Helen’s National track at very conservative speed. There was absolutely nothing scary about it. It jumped and handled braking bumps exactly as it should. The only part that took some adjustment is cornering. When you sit down, the bike feels awkward, so you learn to turn and do everything else standing. 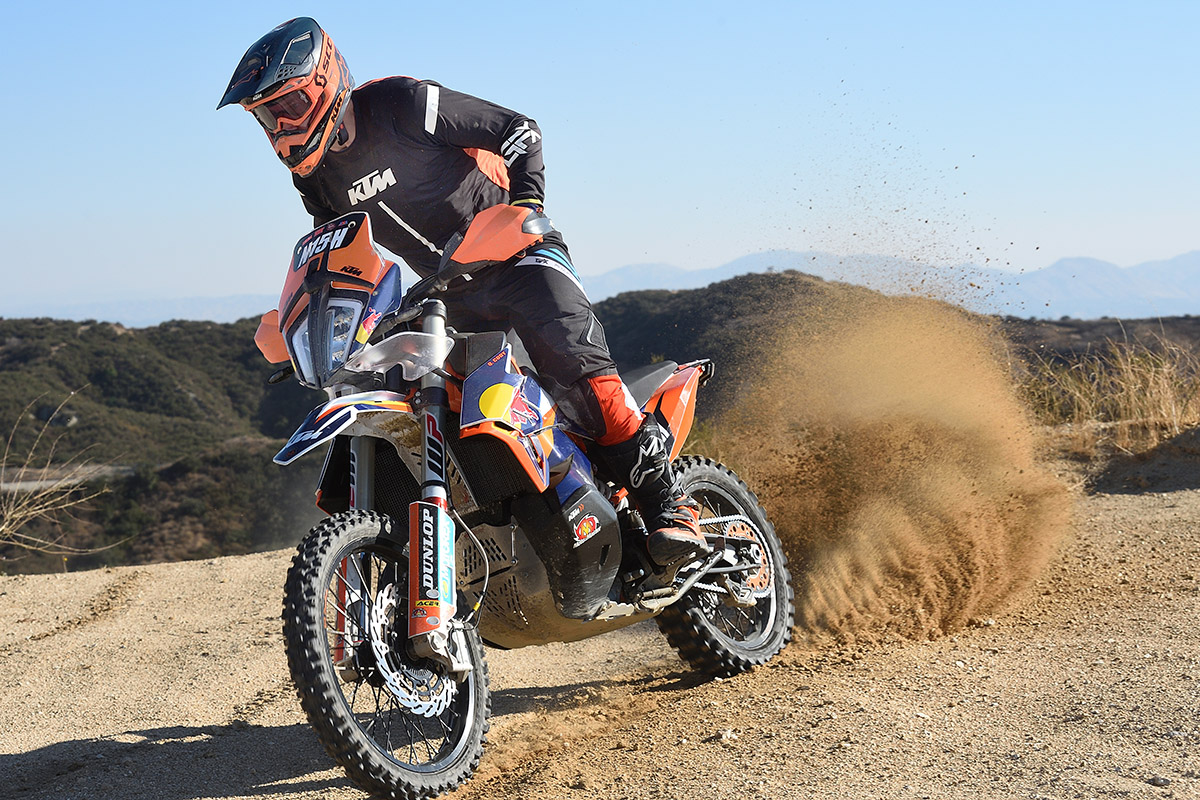 “I’ve spent so much time on it that the 890 feels like a normal dirt bike to me,” says Quinn. “Now, when I get on a motocross bike, it feels squirrely.” I can clearly see how that could happen. But even after riding the bike, I still don’t know if I would or could race it in the National Hare & Hound series. At the end of the day, it’s still a lot of motorcycle. Riding Quinn’s bike, as it turned out, didn’t transform me into Quinn. For more on the bike, check out the February, 2021 print edition of Dirt Bike.

The  Meteor will be available in select model trims in the Americas in 2021. Even though an adventure bike version hasn’t yet been announced, there’s almost certainly one in the works.

The Meteor 350 inherits its name from the  motorcycle of the 1950’s. The new version has a fuel injected, 349cc air-oil cooled single-cylinder engine. It is said to generate 20.2 bhp and 19 ft-lbs of torque at 4000 rpm. Considering that the 411cc Himalayan’s price, we can surmise that the 350 would be even more affordable.

For years, Rex Staten was a player in national motocross as well as in Southern California. Even though he never won a major championship, he won big races including the Daytona Supercross. At the 2020 Dubya World Vet Championship, Lori Wilson and Bud Feldkamp presented Rex with Glen Helen’s lifetime achievement award as well as a place on the Walk of Fame. Check out the video that Travis Fand produced as a tribute to Rex’s career.

The arrival of 2021 test bikes was slowed by Covid 19, but they are coming into the Dirt Bike garage in rapid fire now. The Husqvarna FC250 doesn’t look dramatically different but has game changing improvements in the suspension department. The 2021 KTM 250SX-F has the same suspension changes. It isn’t supposed to have significant motor changes, but everyone who rides it comes away saying it’s faster than ever. We also have a 2021 TM EN300 two-stroke off-road bike. This one has a carburetor, even though TM also makes a version with TPI fuel injection. It also has an Ohlins shock. It’s got electric start and a counterbalancer, so it’s a very popular bike among staff members. Look for tests of all of them in upcoming print editions of Dirt Bike.

Dear off-road motorcyclist,
We ask your patience as we discuss plans for the 2021 edition of the Soboba Trail Ride. As we do with every Soboba Trail ride, we plan the event with participant safety first and then riding fun a strong second. With the uncertainty that the Covid-19 pandemic has placed upon our country, tribe and motorsports we will announce information about the next Soboba Trail Ride before January 2021.
As off-road motorcyclists you’re aware that our sport has social distancing built-in but we must still consider your safety in the Soboba Trail Ride paddock, not to mention the health of the volunteers and tribal members that make each year’s ride possible.
If you are already on the Soboba Trail Ride email list, as a prior event rider or by request, you’ll be alerted to news about the 2021 ride the moment it is announced. If you are not on our email list, CLICK HERE to go to our website
and sign up. If you get to ride in the meantime, do it in a safe and responsible way. Like us, we know you’ll strive to keep your family and riding buddies’ safe and healthy too.
Thank you,
Bob Graziano
For the Soboba Trail Ride
See you next week,