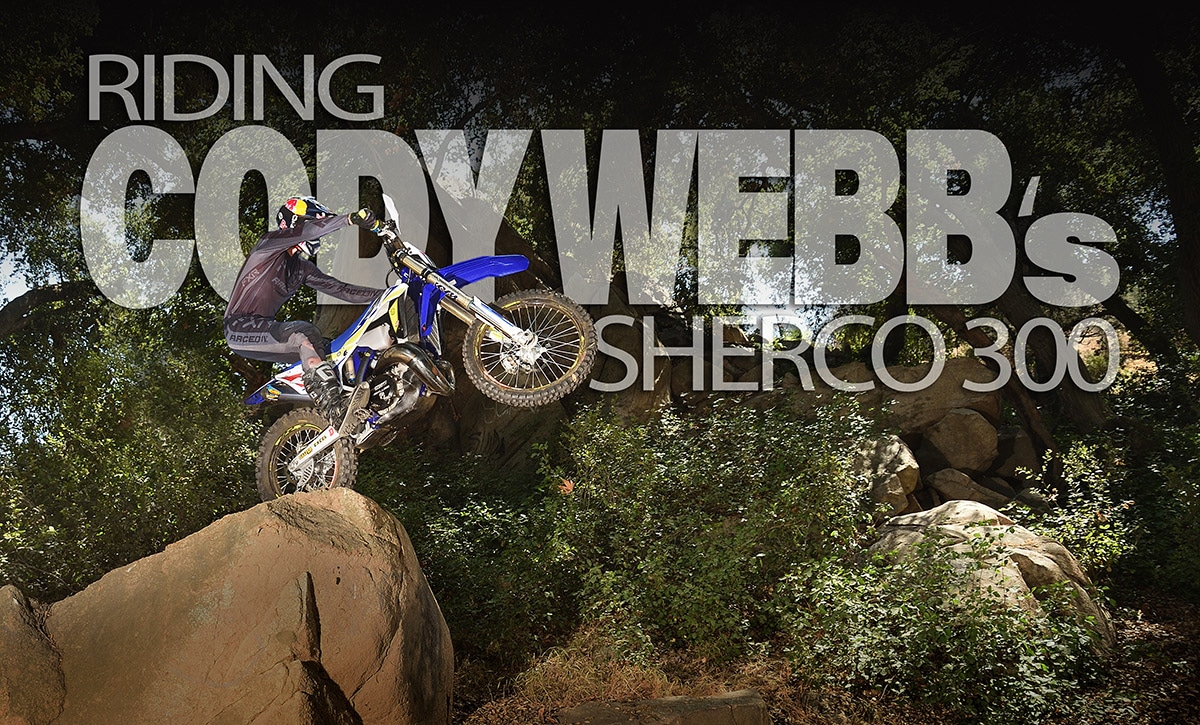 In 2019, Cody Webb rebuilt himself. Everything in his life had changed that spring when a knee injury forced him out of racing for the season. This was on the heels of an injury sustained in the prologue of the 2018 Erzberg Rodeo in Austria, and a controversial last-round loss of his number-one plate in the SuperEnduro World Championship. He went from being the hottest commodity on the world stage of extreme enduro to just another rider on the “what ever happened to…?” list.

On the evening of that knee injury, Cody was dejected and feeling sorry for himself. Then his wife Morgan put everything in perspective. “She surprised me and turned my whole view on the situation around that night. She let me know that we were expecting a child, and it was at that point that I realized how selfish I was. I thought my world had just collapsed, but it was only just getting started.”

The Cody Webb of today is in a very different place. Aside from being the father of a 2-year old, he’s riding for a different team on a different bike, living in a different state and looking at everything from a different perspective. The move to the FactoryOne Sherco team surprised some, but it made sense. “I had ridden Kyle Redmond’s Sherco 300 and was really impressed.

The KTM’s fuel injection was new at the time, and I wasn’t that comfortable with it. I’m sure that it will get better, but for now, I like the Sherco and the carburetor.”

Cody came to Southern California from his new home in Colorado for the 2021 Last Dog Standing Extreme Enduro. The day before the event, we hooked up with him and got to ride his Sherco 300SE Factory for ourselves. 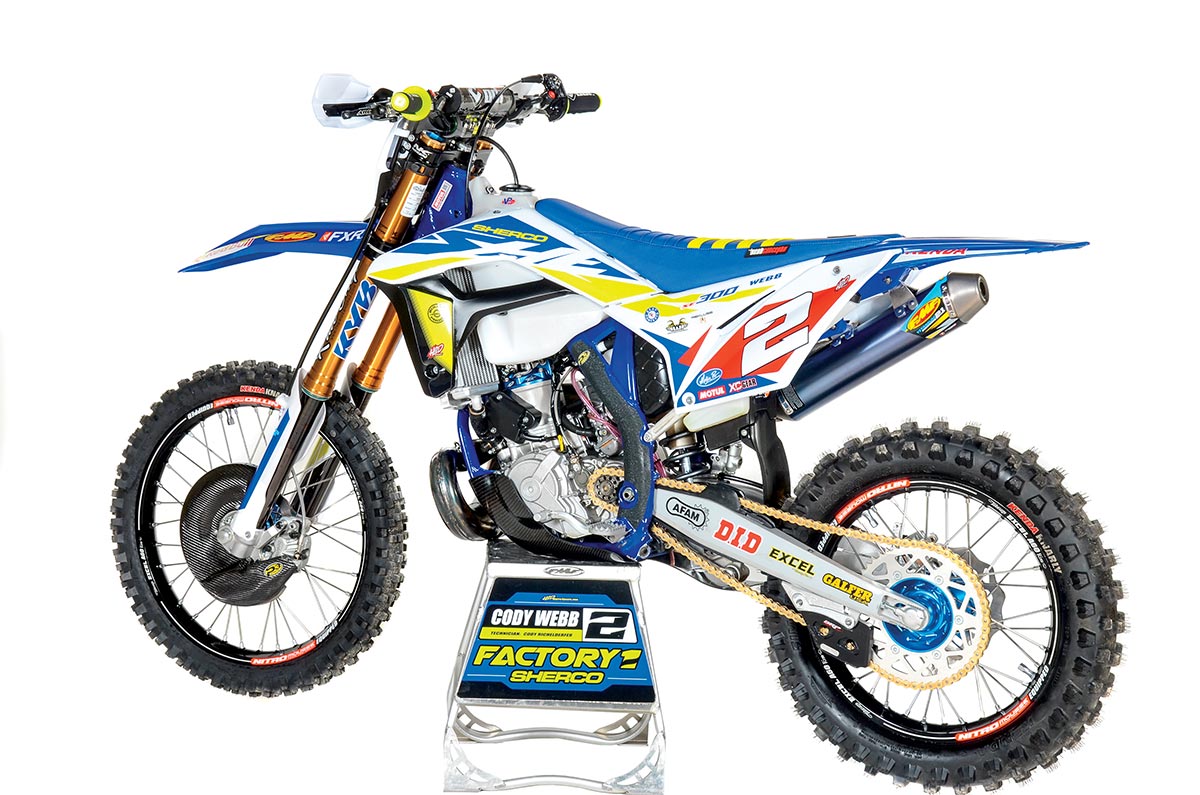 THE FACTORY’S FACTORY
In the Sherco model line, the Factory version of the 300cc two-stroke is the upscale model. For 2021, the U.S. importer didn’t bring in the standard model (called the “Racing” edition), so Cody’s bike has fewer modifications than you might expect. The most significant one is the use of KYB A-kit suspension, which is set up by The Ride Shop in Arizona. The frame and bodywork are all standard issue, and Cody doesn’t use a steering damper.

The motor has a number of changes, but all are off-the shelf parts. The porting, ignition and mapping are all standard. The head is an S3, which has replaceable domes. That allows Cody to alter the compression. When we rode the bike, it had stock compression, although when Cody rides at home at altitude he uses the higher compression dome. Either way, he runs VP C12 racing fuel. The bike comes with an FMF exhaust system coupled with a Sherco silencer. “I brought some relationships with me from my KTM days,” he says. “One of them was FMF. They designed a new silencer for me that helped quite a bit.”

Possibly the most important engine modification is the Rekluse Core manual clutch with a Rekluse slave cylinder. He’s very picky about the action, and he can tell immediately if the basket is cast or billet. “For the type of stuff I do, clutch feel is everything.” He does not run an automatic clutch, although he has in the past. “They get closer and closer to a manual clutch all the time, and some people say they can’t tell the difference. But I can.”

Some of the aftermarket parts are all about crash protection. ARC folding levers aren’t unbreakable, but are probably the closest thing to it. They’re available in aluminum and Memlon versions. Cody prefers the feel of the aluminum versions. The Mako 360 bar mount system from XC Gear is designed to allow cushioned travel in any direction or angle that force is applied to the handlebars. These are mounted on a Neken aluminum triple clamp system, and Cody uses ODI Controlled Flex Technology (CFT) Podium handlebars. The P3 carbon skid plate has frame-rail protection, engine-case protection and shock-linkage protection.

Wheels take huge amounts of abuse during an extreme enduro. Nitro Mousse foam inserts are a must to eliminate the chance of flats.  Dubya USA built wheels that feature Talon billet aluminum blue hubs, stainless steel spokes and black Excel A60 rims. The Kenda Knarly tire is a gummy version. 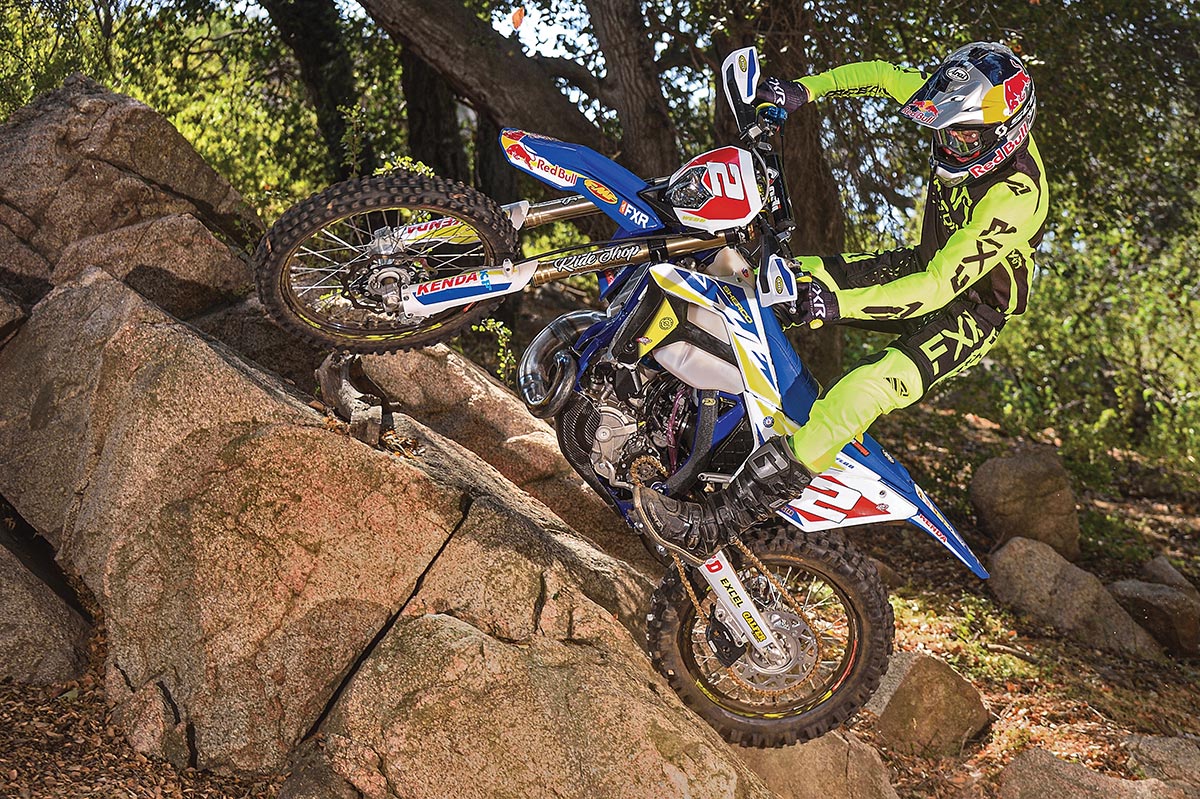 RIDE LIKE CODY
When we tested Cody’s bike the day before the Last Dog Standing, we came to a sad realization: we can’t really test it. Not the way we want to, anyway. After watching Cody climb vertical faces and leap from rock to rock, we very quickly backed away. We can’t test the bike in that setting any more than we could test Ken Roczen’s Supercross suspension or the handling manners of an F22 jet fighter. We could, however, ride the bike and report on how it differs from a stock Sherco 300SE Factory.
It doesn’t.

To clarify, the FactoryOne Sherco 300SE has the feel of a crisp, well-prepared bike built with loving care by a professional tuner. It’s an amazing bike for a lot of reasons, but almost all of that can be said of a stock Sherco as well. Like the production version of the bike, it has excellent low-end power with throttle response that is both instantaneous and very controllable. The motor has an electronic power valve that is a generation beyond most other two-strokes. A computer opens the power valve as much and as quickly as is demanded by engine rpm and load, whereas old-school ball-ramp devices are all-or-nothing, resulting in a sudden hit. The Sherco is freakishly smooth, particularly in the low-rpm regions where Cody spends most of his time. It’s also very difficult to stall, even if you try. This might be one reason why he doesn’t need an automatic clutch, whereas many other extreme enduro riders consider that a necessity. Cody simply doesn’t have an issue stalling the motor, and he almost never gets off to lift the bike over a stump or log. On top, the bike flattens out a little early, possibly a price to pay for all the rich bottom end.

One aspect of the bike that was clearly unlike the standard 300SE was the traction. Gummy tires have their own special feel. They aren’t made for railing a Supercross turn at speed; the sidewalls are too flexy, and you can feel an uncomfortable amount of tire roll. But, the traction they offer on hard surfaces is unreal. You don’t realize how much tire slip is normal until it’s gone. The hardest part is learning to trust the grip. Normal riders with normal tires can sense wheel spin before it happens and prepare to make a dab or a weight shift. In order to use a gummy to its full potential, you have to commit. Keep your weight forward and your feet up. It doesn’t come naturally or quickly.

REALITY CHECK
We would like to say that having Cody Webb’s FactoryOne Sherco in our garage would automatically up our game. We would like to say it’s an easy way to do those amazing feats and be an instant expert. That’s not realistic. The skills required for extreme enduro take years to develop. You can think of the bike, whether it’s a factory-built team racer or a stock 300SE, as a fine instrument like a grand piano or a violin. Having one doesn’t mean you can play it. But, you still need to have one.