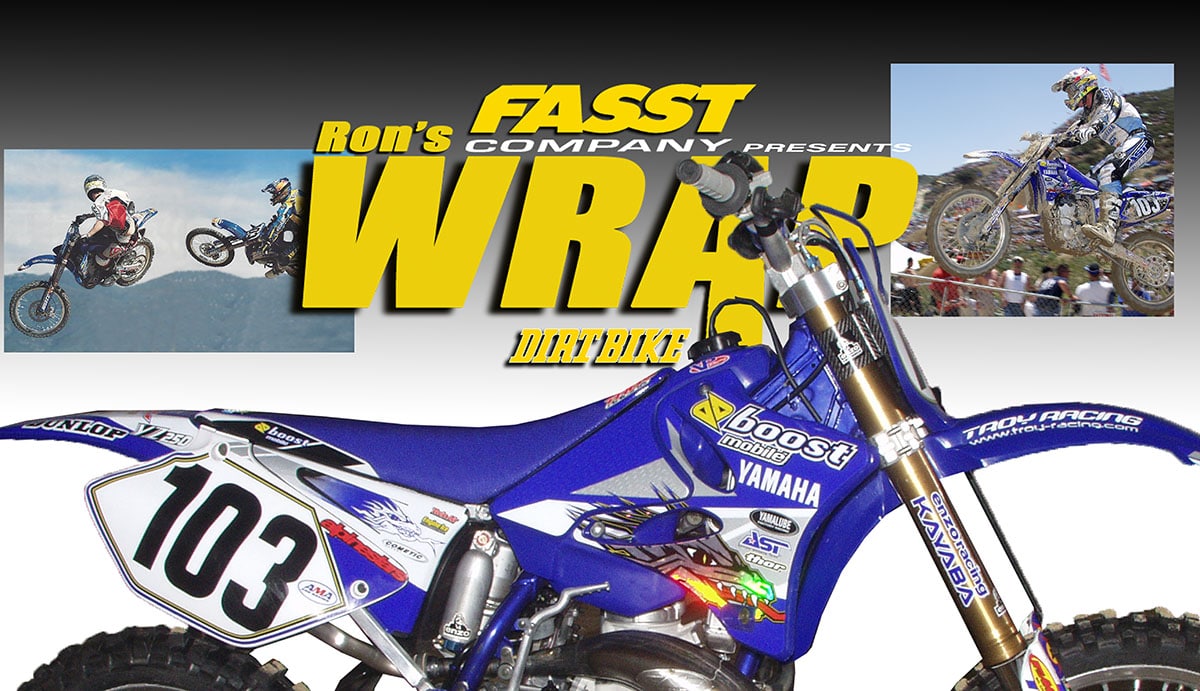 Chad Reed says he’s in his final season of U.S. Supercross this year. Racing without Chad seems unimaginable now; it takes someone with a very good memory to think back to his first U.S. season. It was sooo long ago. I have a crappy memory, but I do remember when Chad came to the U.S. simply because I got to ride his 2002 race bikes. That year he rode in both the premier class on a YZ250 two-stroke and in the 125 East class on the new YZ250F. The 125 East riders didn’t start racing until round six, so in the first three rounds, Chad rode in the big boy class just to see how he would stack up. He performed far better than anyone expected, finishing as well as fifth. Then he utterly dominated the 125 East series, winning all but one. His famous 2002 rivalry with James Stewart started at the East West Shootout that year, with James winning and Chad second. In the outdoors, James dominated 2002. Chad won a single round, setting the stage for a career-long duel that lasted until James quit.

This was the second year that had 250-four-strokes mixing it up with 125 two-strokes. Yamaha of Troy Racing’s Dean Baker and Team Yamaha’s Bob Oliver developed Reed’s 250F motor, starting with Yamaha Motor Corp.’s factory crank, a special transmission that moved first and second closer to third, and a programmable, digital ignition. Deano and Bob O boosted the compression and reworked the head for max flow, and a Hinson basket was used to handle the increased loads from the modified motor and 13/51 gearing. The 37mm FCR carb got  a new intake bell with the DSP carbon-fiber airbox, and it was jetted to get the most out of the Ti FMF header with power-bomb and silencer.

On the track, the Boost Mobile YZ250F was the fastest 250F that we had ridden at that point, but there were still 125s that were faster. In that era, Pro-level 125s were extremely hard to ride. Chad’s 250F still had an easy-to-ride personality that gave it an advantage on dry-slick surfaces, as we had at Glen Helen that day. It wasn’t pipey or cammy at all; the power simply built revs, and the engine reved much freer than stock. And clutch action and gear ratios were perfect. Baker and Jon Rosenthal developed the suspension, linkage and triple clamps for the team with Enzo Racing doing the valving and maintenance. At the time, we thought Reed was a hammerhead. His suspension settings were the stiffest on the team, and for all of team Yamaha, for that matter. What we didn’t understand at the time was that Chad was simply ahead of the curve. He was one of the first in the pool with Supercross-specific settings.

In the outdoor 125 Nationals that year, everyone speculated that Reed had a horsepower advantage over Stewart. It was difficult to say; I rode both bikes early in the year. I reported that Stewart’s bike flattened out early on top, whereas Reed’s bike kept on revving and revving. But I rode Stewart’s Supercross bike, and I know they found more top end before the outdoor season started. In the outdoor races, Stewart always got a better start because he was lighter and his bike was lighter. That prompted Reed’s often-quoted comment that he thought he could beat Stewart if he only got a better start. This reportedly ticked off James, so he let Reed by at Unadilla, just so he could repass him.

Even though Troy Racing was Yamaha’s official 125 team, Chad needed some supercross experience before the East-coast series started, so the team built him a Boost Mobile Yamaha YZ250 for the West-coast rounds. Chad actually started the season with a near-stock motor. Once he saw he could run with the fast guys, Reed asked Baker and Oliver for more power. They ported the cylinder, boosted compression and reworked the head. His machine didn’t get any trick YMC ignition, tranny or works Mikuni carb, just an FMF exhaust and V-Force 2 reed.

Pete Murray, Robby Renner, Shane Trittler and I all rode the bike, and once again, what stood out was the stiff suspension. His factory Kayaba fork had different internals than the KYB-kit YZ250F as per AMA rules. Free-styler Renner actually liked the stiff settings.

The next year, Reed switched to the premier class on the YZ250 two-stroke. Oddly enough, he never won an outdoor national on a 250 two-stroke. But he would win 23 Supercross main events on the bike before switching to the 450 in 2006. His 2002 bike didn’t have all the Team Yamaha bells and whistles, but it was good enough to show what he had for America’s best riders and set the stage for one of the best Supercross careers in history.

Without much racing news, I’ve been having fun digging through some great old stuff. Check out some of the stories that have gone up in recent weeks by clicking on the images below.

Check back again next week!