Back in 2002, James Stewart was something special and everyone knew it. For the first time in years, Kawasaki took its 125 program in house, just for him. Previously, all the 125 riders were farmed out to Pro Circuit so that Team Kawasaki could concentrate on the big 250 stars like Carmichael and Jeff Emig.

So when Kawasaki did that, did they have to start from scratch? “We never really stopped developing the 125,” said Kawasaki’s Bruce Sjernstrom, back in the day. “We had it on the backburner all along. That year, the 125 cylinder was all new, so that meant we had to do some new development, but so did Pro Circuit. Mike Brown could ride a fast, pipey 125 with no problem. He seemed to like them that way. But for James we had to get more bottom and mid-range power. Rick Asch built the motor and we actually had Jeff Emig help with the testing.”

Kawasaki was so proud of its 125 effort that Bruce and the crew had no problem bringing the bike out for us to try, right in the middle of that 2002 season.It was obvious that Stewart’s Kawasaki was an all-out factory effort. The list of unobtainable factory parts was long. The centercases and the cylinder started off as stock parts, but everything else was special. The six-speed gearbox had different ratios set up for Supercross. The outer cases were magnesium. The Mikuni carb didn’t look like anything we had seen before. It had both a PowerJet and a throttle position sensor wired into an ignition that was, of course, programmable. The pipe was specially made by Pro Circuit and the reed valve was specially made by Moto Tassinari. Stewart wasn’t a big guy (not yet), so the seat height had to be dropped for him. About 8mm was taken out of the subframe, the seat foam was shaved and even the seat brackets were shortened. It all amounts to almost two inches. And under that seat was a carbon fiber airbox made locally by Berg Racing.

Was it fast? Yes and no. All the power was right in the middle. It was a little soft way down low, but when it hit, it hit hard.  We thought it signed off early, even by the standards of 2002, but it was deceptive. It made so much in the middle that the top felt comparatively mild. At the time, Pete Murray rode the bike for us. He put it well: “The bike is great. But it wasn’t the bike that won those races.” What you saw on the track was pure Bubba.

Last November, Yamaha introduced the press to the 2020 YZ250FX and the YZ125X in Union, South Carolina. This was a mass gathering of various media outlets. These days the definition of a media outlet is changing. There were a half dozen websites, a few Youtubers and some social media influencers. We were one of the few participants that had a print magazine AND a website AND Youtube AND all the other stuff.  Afterward, we published videos on the YZ250FX and the YZ125X, and we published a website report on the YZ125X as well as the YZ250FX. 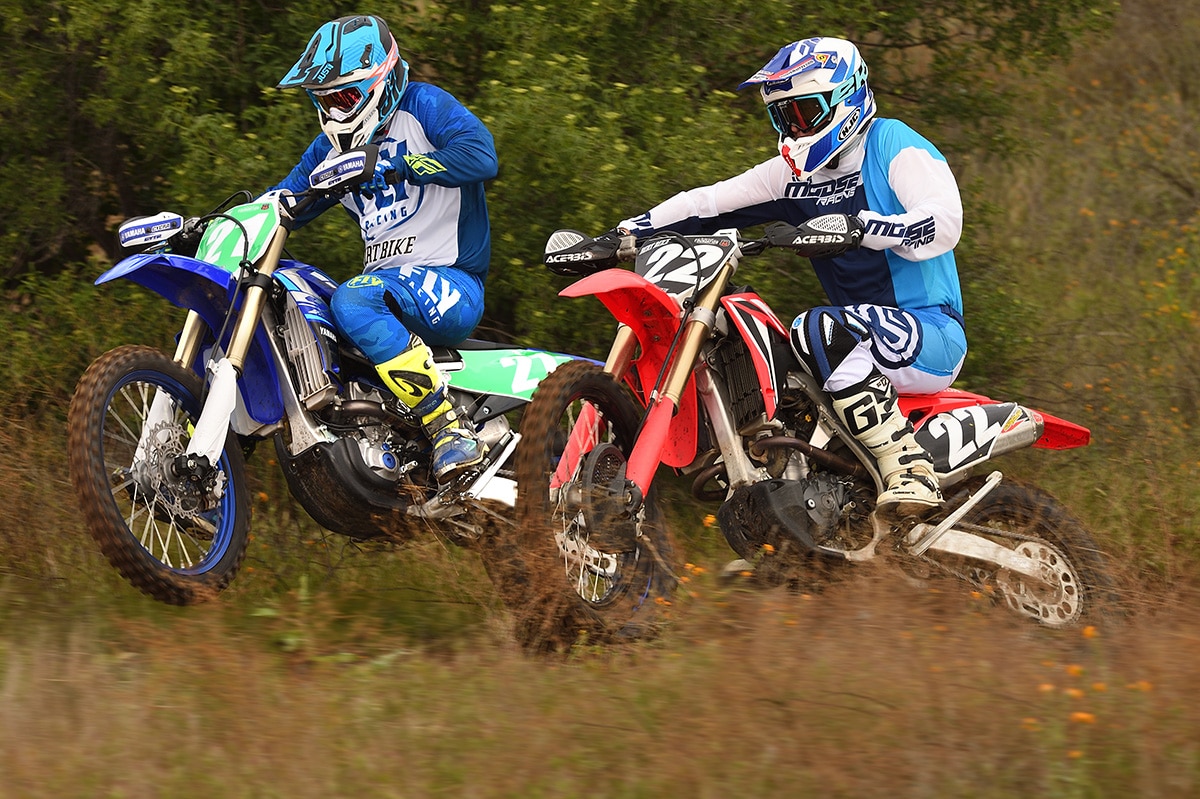 The only problem with mass introductions like this is that you don’t get a very accurate test of the motorcycle. You don’t have other makes on hand for comparison, and you are generally riding in unfamiliar terrain. That’s why we held off on doing a story in the print edition of Dirt Bike. We explained to the people at Yamaha that we need a test bike in our hands in order to weigh it on our scale, shoot it in our studio and test it in our trails. They agreed, and the full test of the 2020 YZ250FX will appear in the June, 2020 issue of Dirt Bike. There will also be a sidebar comparing it to the Honda CRF250R, which was previewed in The Wrap last week. The real reason, however, is that we loved the bike in South Carolina and we wanted one. 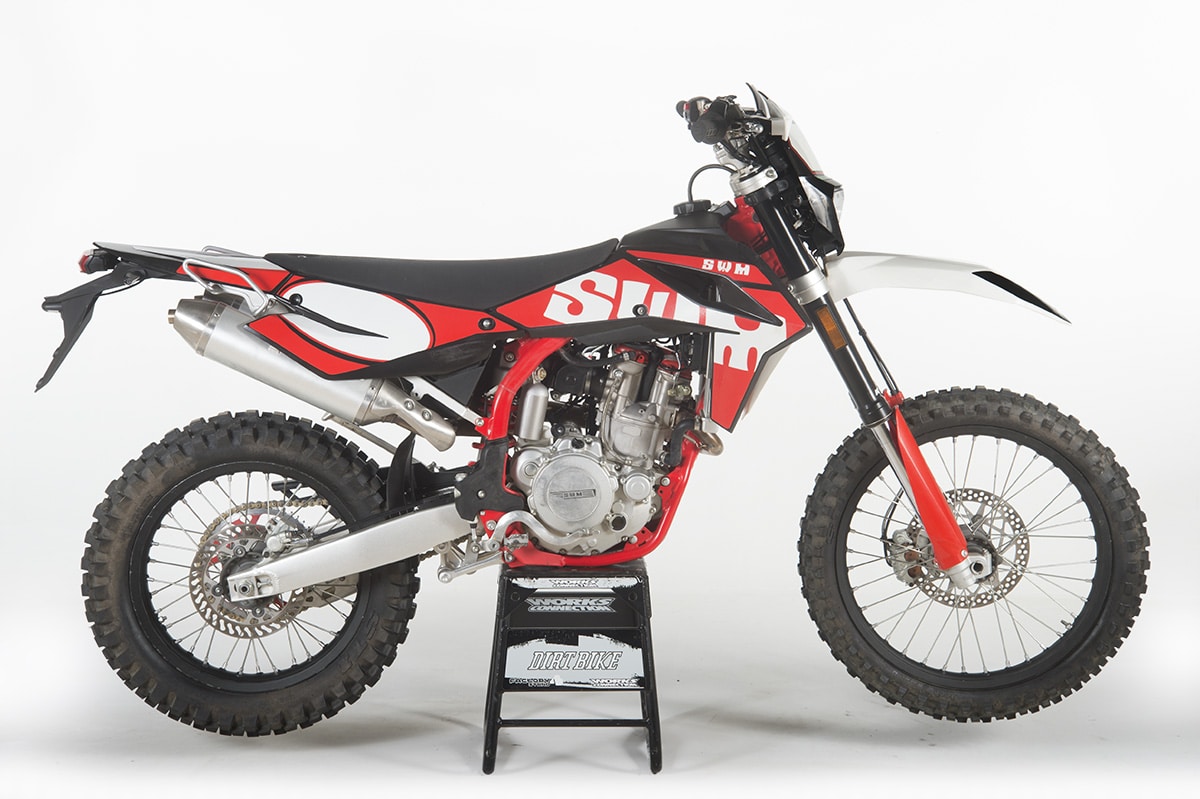 Like everything else in Italy, the SWM factory is on hiatus for now. Motoman, the U.S. importer reports that he received a big shipment of bikes before the Covid 19 crisis hit, so he has bikes ready to ship to dealers. We got one of the RS500 dual-sport bikes for our upcoming dual-sport shootout, and we’ve been riding it.

The SWM RS500 is unchanged for 2020, so if you are familiar with the bike, good for you. Most people don’t have a clue what it is. Check out my report on the SWM from last year by clicking here. The SWM factory near Varese was built about 10 years ago by BMW in order to manufacture Husqvarna motorcycles. After the KTM buyout, the factory was shut down for a short period. Then a group of investors got together, acquired all the intellectual rights to produce the Italian-made Huskys under a different name and reopened the factory–thus SWM was born. 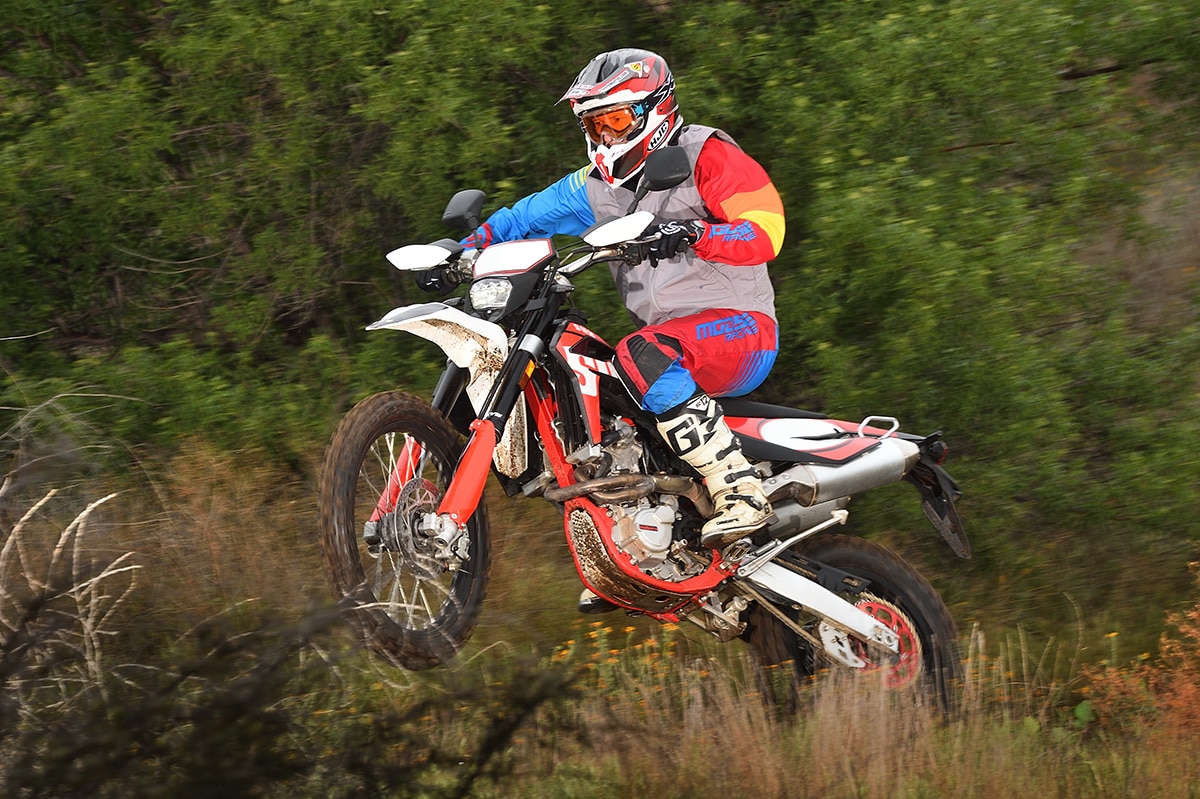 The SWM RS500 is based on the 2006 Husky TE501, which was the first of the hard-core street-legal dirt bikes that inspired KTM and Beta to do the same thing. Now it has been updated with KYB suspension and Mikuni fuel injection. It is, to be fair, technology and design that’s over 14 years old, but it’s also priced accordingly. The MSRP is $7795. 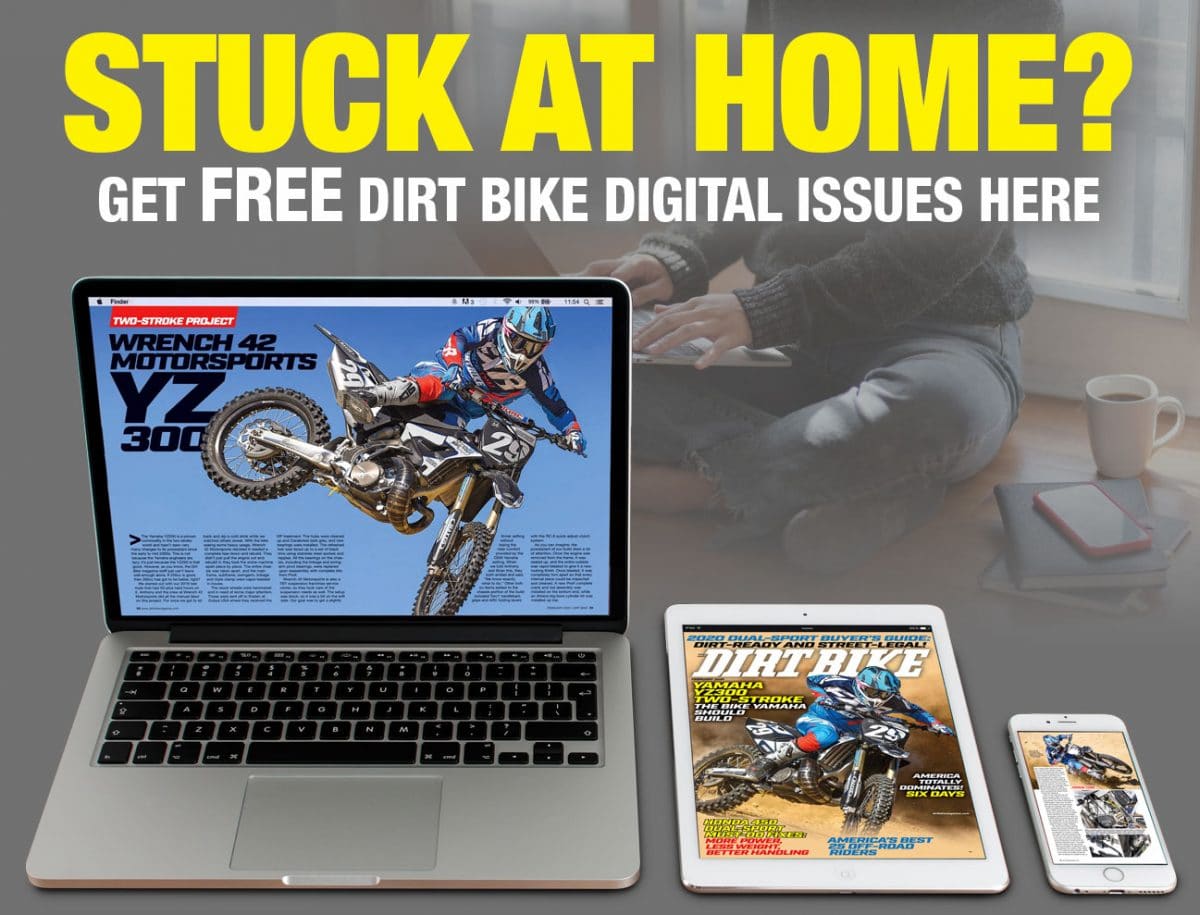 We know you’re stuck at home, desperate for a motorcycle fix of some kind. To help out, we’re making past issues of the print edition of Dirt Bike available on line for no charge. It’s just like the paper product, but with links to videos and other upgrades. Click on the image above to check it out! 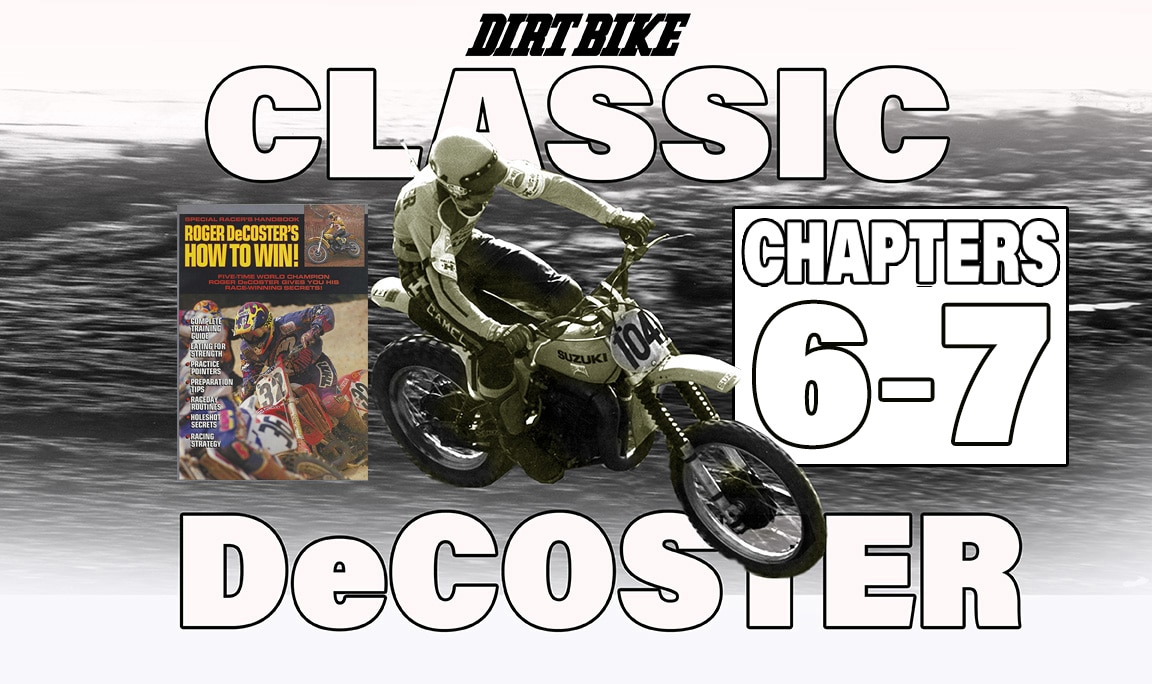 In the months leading up to Dirt Bike Magazine’s 50th anniversary, I’ve been having fun going through all the old issues. I started in 1990, so it’s my 30th anniversary in July. In 1993, Roger DeCoster was on staff full time. He was between his Honda and Suzuki gigs, and we wrote a bunch of stories together. Keep an eye out for them on the website as well as in print. Click on the image above for his racing tips from 1993. They are still as relevant today as ever. 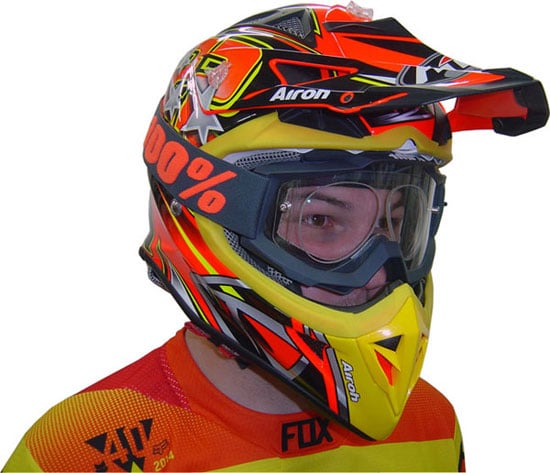 Randy at Pro-Vue has a product worth looking at. Several of the guys on staff (Tom) have aging eyes that need a little help, and have questions on how to deal with that. Here are some answers from Randy’s Pro Vue website.

Q: Is the goggle lens in front of the prescription?
A: Yes.

Q: When the goggle lens gets scratched, can I replace it?
A: Yes.

Q: When the goggle wears out, can I replace it?
A: Yes.

Q: How long does it take to get the goggles?
A: From the time you place the order until they arrive at your door is about two weeks.

Q: How exactly does it work?
A: Your prescription lenses are fitted into a Lexan carrier lens. The carrier lens then attaches to the goggle lens with two screws. The goggle lens fits into the frame normally, and the carrier lens comes across the inside of the goggle in the same place that your eyeglasses would be, so it is like wearing glasses inside goggles, but the only thing touching your face is the goggle foam.

Q: Are these safety lenses?
A: NO. These lenses, just like the goggles are mounted in, are for wind and dust protection only. They are not intended for use in impact type situations.