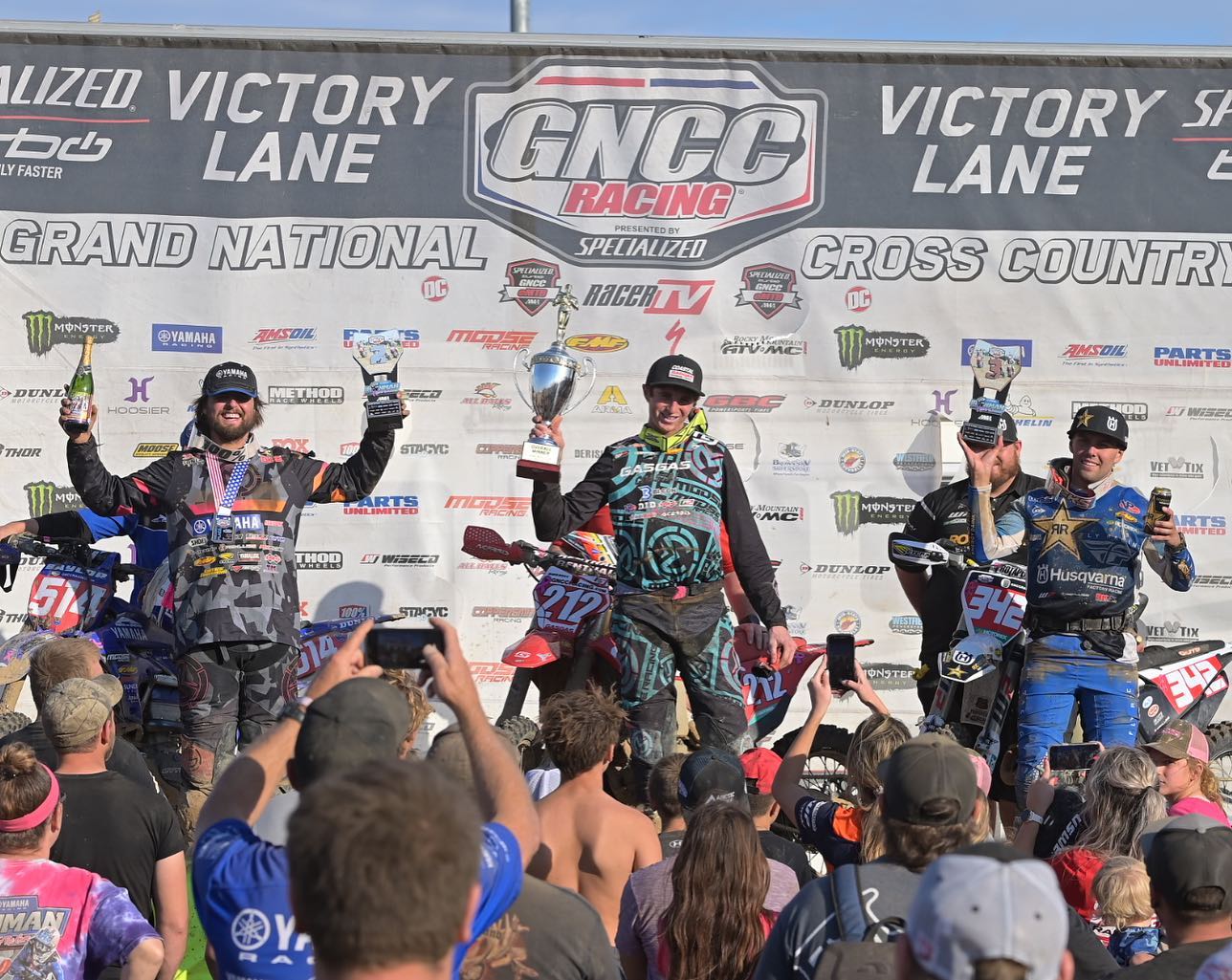 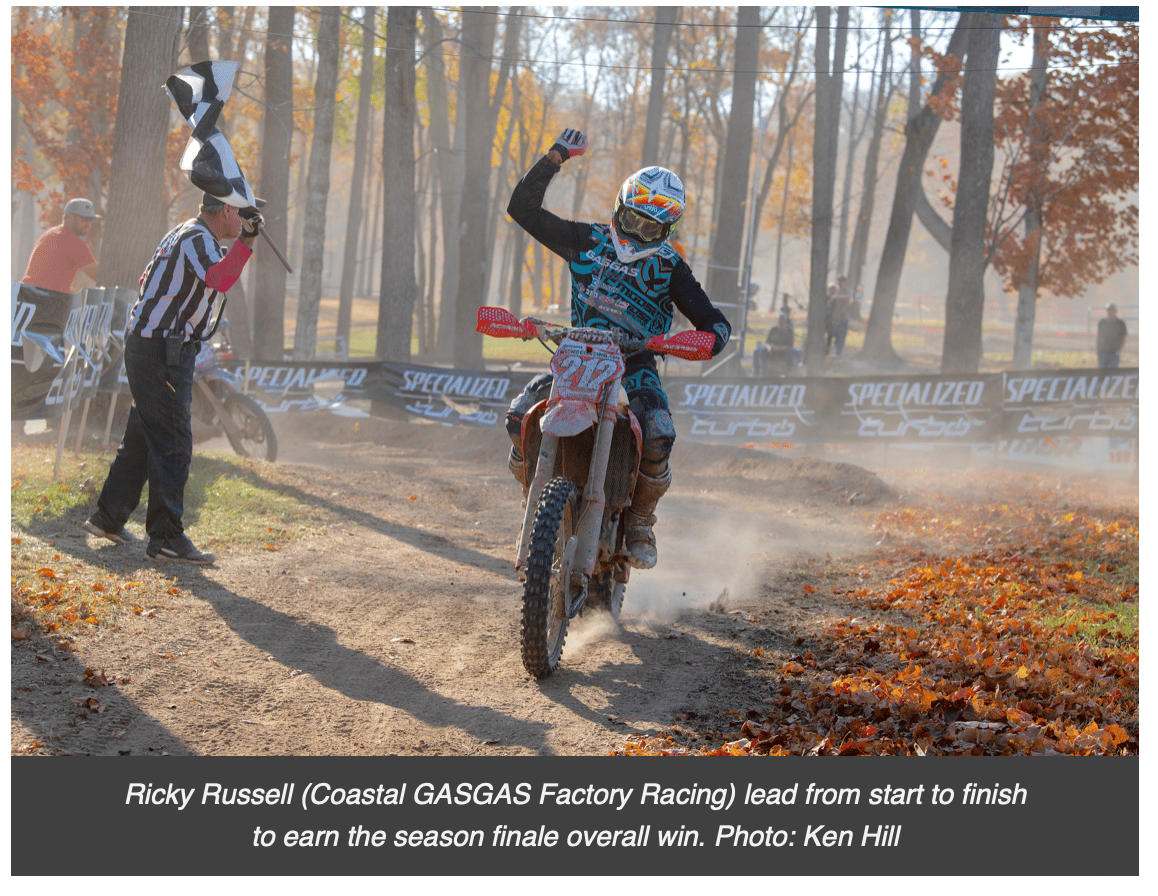 As the green flag flew Coastal GASGAS Factory Racing’s Ricky Russell would earn the $250 XC1 All Balls Racing Holeshot Award. Russell would hold the lead from start to finish as he came through with over a forty second lead on the rest of the field.

AmPro Yamaha’s Steward Baylor would make his way into the second place position after starting back in fourth on the opening lap. Baylor would continue to push, but he was unable to catch Russell to make a pass for the lead. Rockstar Energy Husqvarna Factory Racing’s Craig DeLong rounded out the top three overall finishers at the last round of 2022. DeLong would make the pass for third at the halfway point and would continue to push until the checkered flag flew. 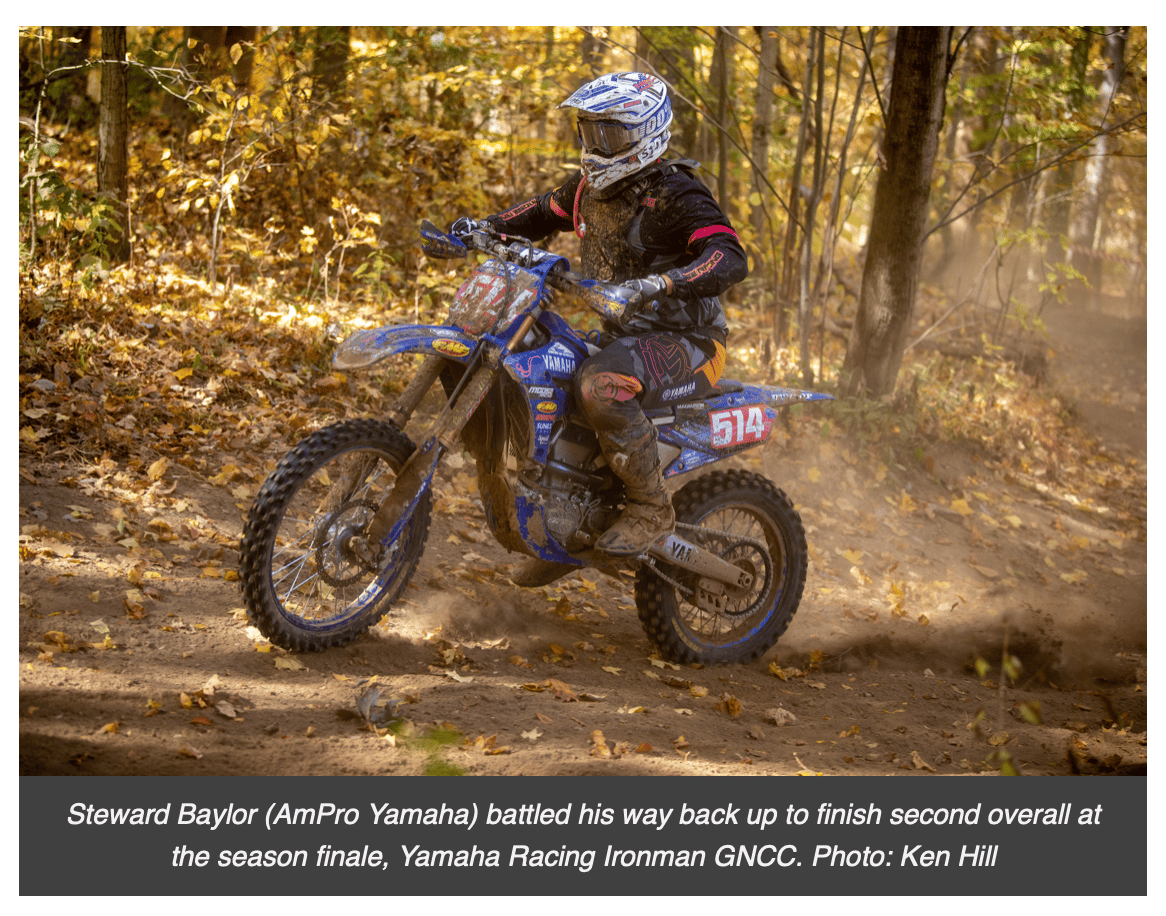 Coming through in fourth was the newest XC1 Open Pro racer, Coastal GASGAS Factory Racing’s Jonathan Girroir. Girroir would start back in the sixth place position, but he would make this passes and move into fourth as the white flag flew. Motoary and Chrissy Route Racing’s Tom Knight came from Great Britain to try his hand at GNCC Racing and would come away with a top five finish on the day.

FMF/KTM Factory Racing’s Josh Toth was battling for a podium position before a mechanical issue would sideline him for the remainder of the race. However, he would still earn a sixth place finish in the class. Factory GASGAS Racing’s Giacomo Redondi who hails from Italy rode under the Coastal Racing tent for the season finale, finishing seventh in the XC1 class. Rockstar Energy Husqvarna Factory Racing’s Thad Duvall was having a good start to the race, running second on the opening lap, but a on track incident left a hole in his radiator and ultimately ended his day. 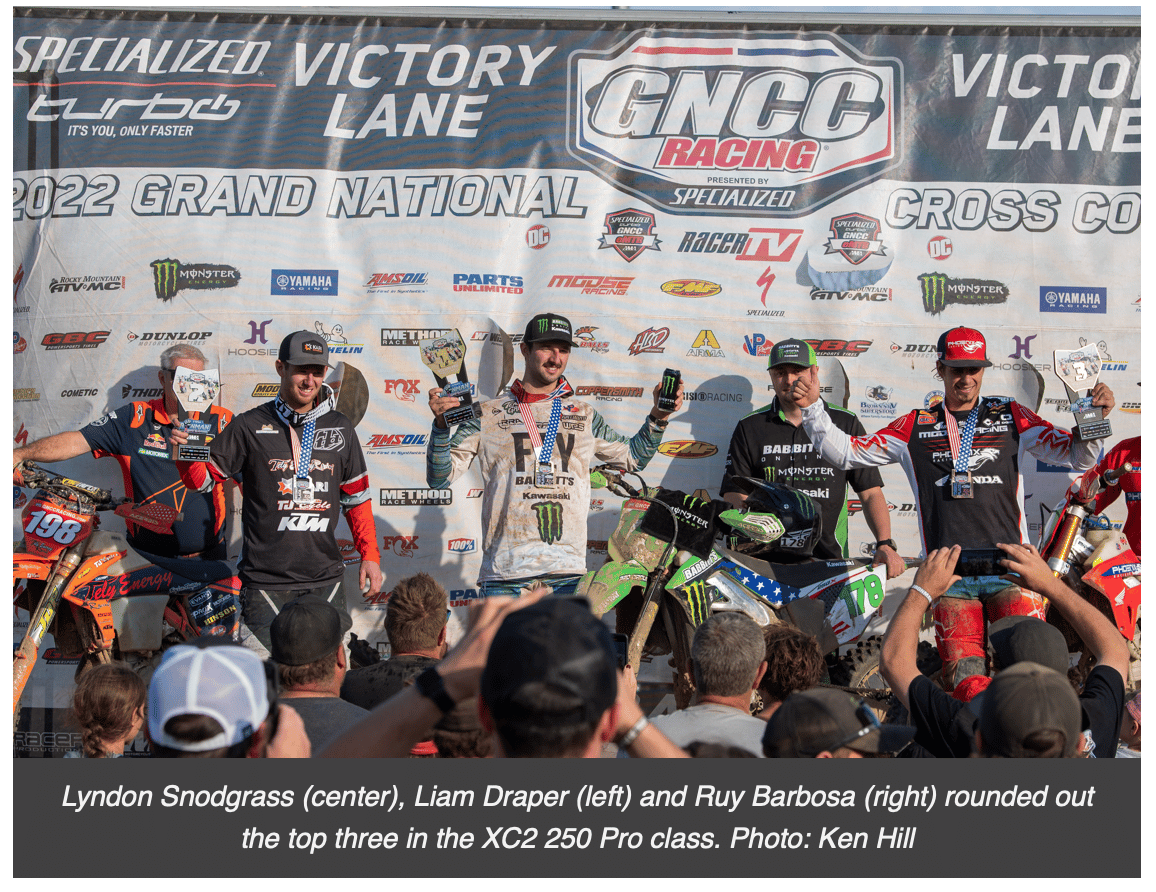 Grabbing the early lead in the XC2 250 Pro class was Babbitt’s Online/Monster Energy/Kawasaki Team Green’s Lyndon Snodgrass. As the race continued on Snodgrass would continue to hold the lead over the rest of the field. Snodgrass would cross the line first, earning the last win of the season. Snodgrass, who earned the XC2 Championship, will wear the number one plate for the class next season. Coming through to earn second in the class was Tely Energy KTM Racing’s Liam Draper as he battled with Phoenix Honda Racing’s Ruy Barbosa. Barbosa would make the pass on Draper, but Draper would soon make the pass back and hold second until the checkered flag flew. Barbosa would hold onto third in the class.

In the FMF XC3 125cc Pro-Am class it was Devore Racing/Action Extreme Sports/Civiello Construction’s Dakoda Devore earning his first win of the season in the class. Devore would work his way up to the lead after a fourth place start to the day in Indiana. Coming through second was Husqvarna/Fly Racing/Coppersmith Racing’s Jake Froman. Froman and Devore would battle back-and-forth for the lead, but Froman would be unable to make the pass stick on the last lap. Rounding out the top three in the FMF XC3 class was Liqui Moly Beta Factory Racing’s Jason Lipscomb. 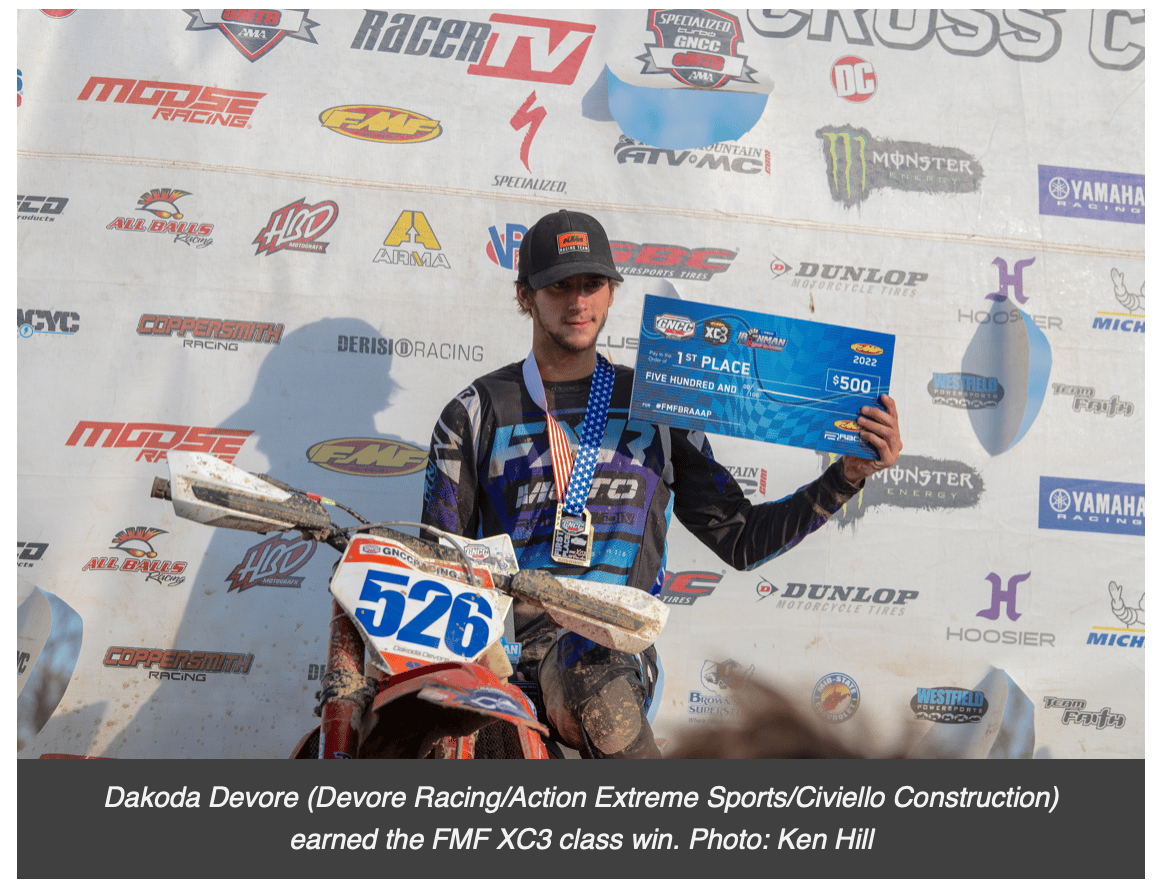 As the WXC class took off it was AmPro Yamaha’s Rachael Archer grabbing the $100 WXC Trail Jesters Holeshot Award. However, it wouldn’t take long for the Rockstar Husqvarna/Surge Off-Road Coaching Team’s Tayla Jones to make the pass for the lead. Jones and Archer were tied for the points, it was a winner take all situation for the National Championship.

Jones would continue to hold the lead, while Archer was hot on her heels as the race wore on. Then as the white flag flew it was Archer coming through the finish line first with Jones twelve seconds behind her. Archer would continue to push to place a gap over Jones, and when the checkered flag flew it was Archer holding that number one position to earn the WXC National Championship. Jones would come through second while Raines Riding University/Yamaha’s Prestin Raines would battle throughout the day to earn her first WXC podium with a third in the class.

Due to the high number of riders, the morning amateur racing at Ironman has continued to be split into two races. In the 8 am amateur race it was Austin Franklin coming through in the Warrior class to earn the overall win followed by Matt Modic in second overall and in the Warrior class. Rounding out the top three overall finishers in the morning was the 250 C Schoolboy racer, Keihin Rupp.

The youth bike racers would have an amended schedule and race on Saturday evening after the pro ATV race. A new winner emerged as Canyon Richards made the move up to the YXC1 Super Mini Sr. class. Richards, who earned the win in the 85 (12-13) class, would come through to earn the youth overall win and YXC1 class win. Sawyer Carratura and Van Gosselin came through to earn second and third overall and in the YXC1 class.

Then in the YXC2 Super Mini Jr. class it was Brody Amos coming through to earn the class win over Ryan Amancio and Doc Smith who rounded out the top three. In the 85 (12-13) it was Landon Barker earning the win, while Ethan Harwell came through to take the win in the 85 Big Wheel (12-15) class. The 85 (7-11) class win went to Colton McQuarrie. Then in the 65 (10-11) class it was Travis Lentz earning the win, while Deegan Caplinger battled to win the 65 (9) class. The Girls Sr. (12-15) class saw Ellie Winland take the win, while Paisley Harris came through to earn the Girls Jr. (8-11) class win. Then it was Landon Bauman earning the Trail Rider (7-15) class win. 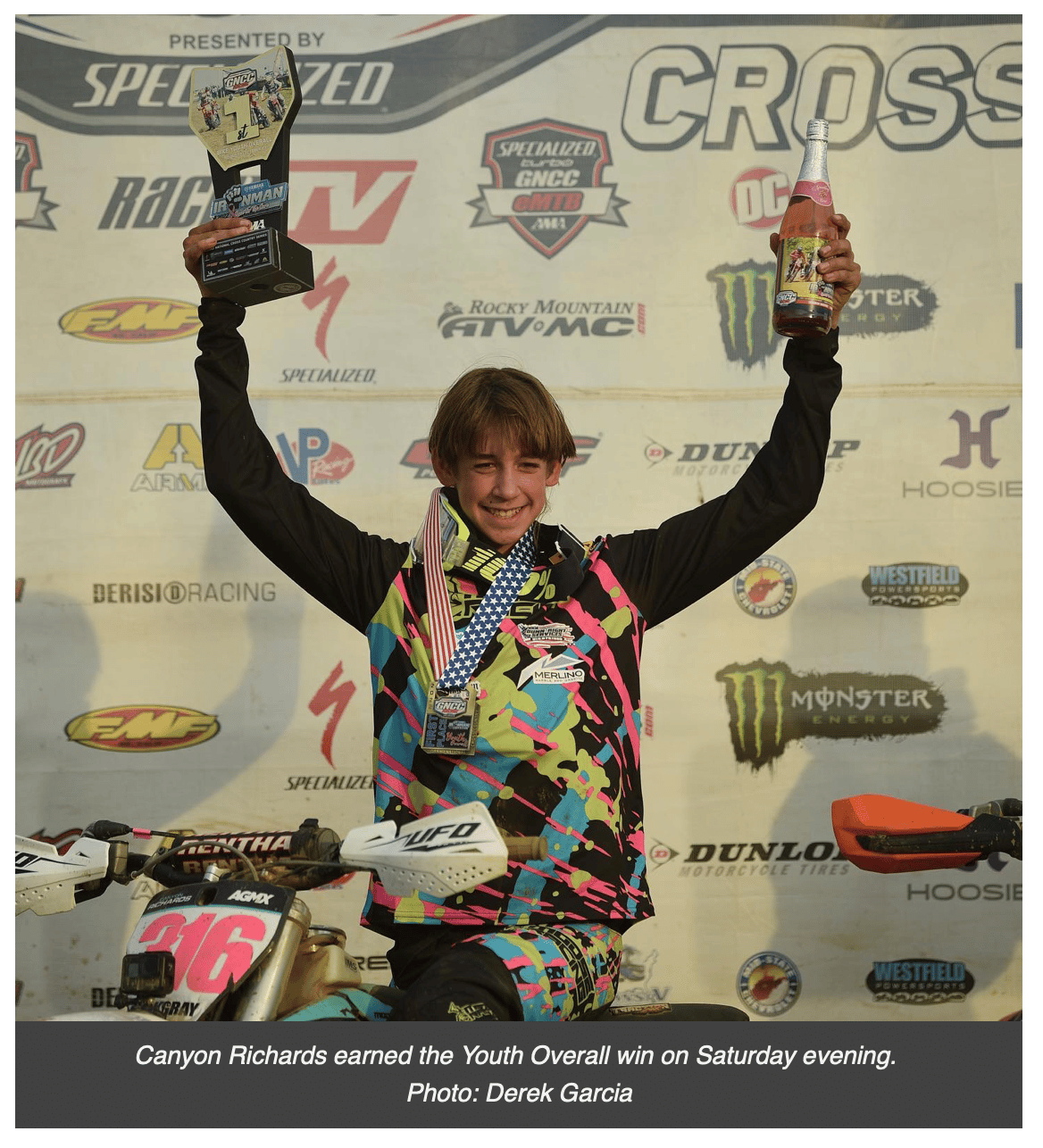 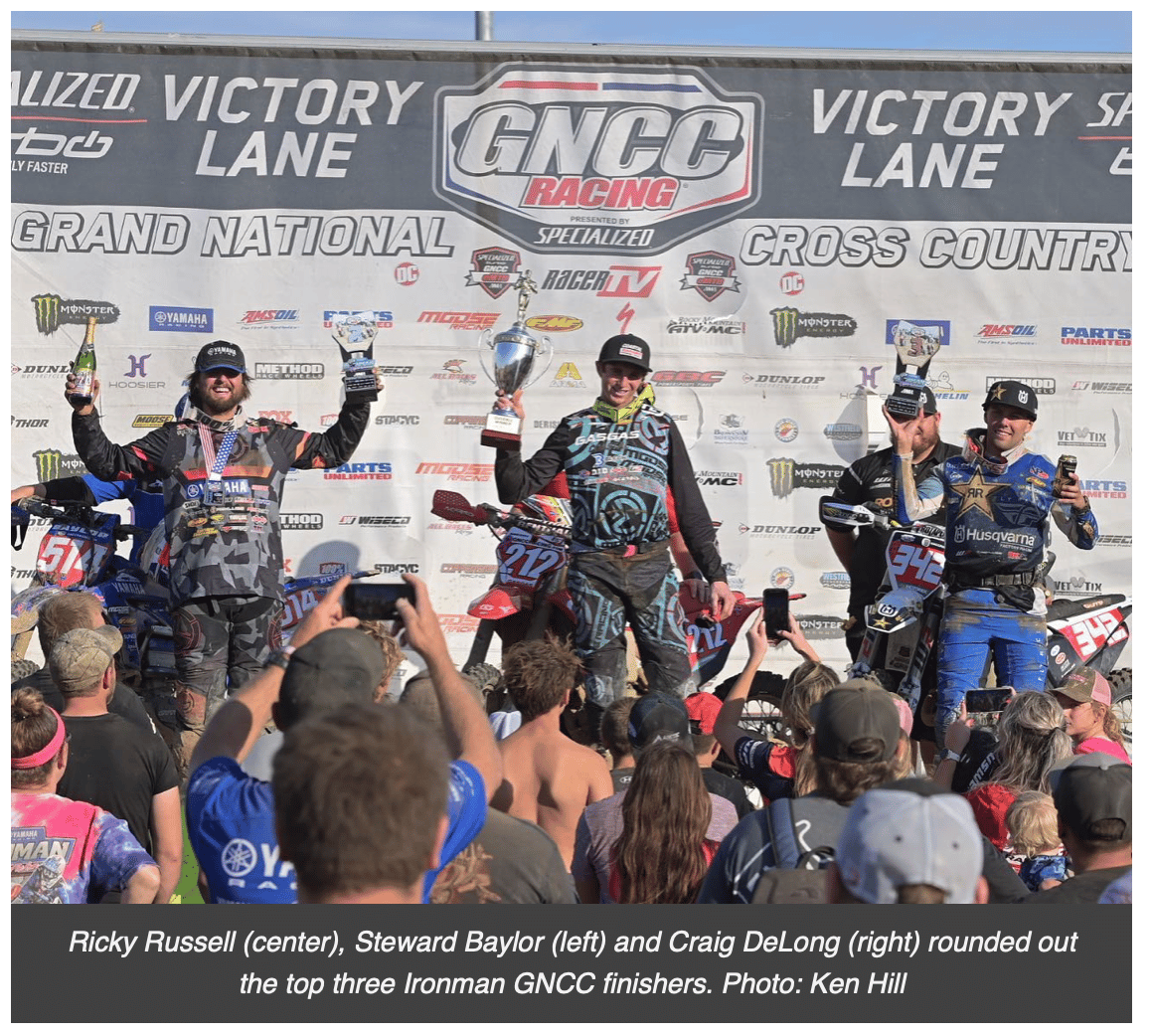