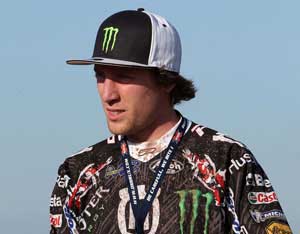 Photo: Jonty Edmonds
The 2012 season is still relatively fresh for CH Racing Husqvarna’s Ricky Dietrich. The Enduro World Championship has yet to begin, but the new British Sprint Enduro Championship (BSEC) is ramping up, and has already provided Dietrich with his first win of the year. He battled with Taddy Blazusiak throughout the weekend, and while a few mistakes relegated him to third on Saturday’s event, Dietrich was able to pull off a flawless performance on Sunday for the Elite win!

It’s a landmark win for Dietrich – his first European victory, and his first race win since June 2010 (Cahuilla WORCS) – but still feels he has a lot of work to do before he’s at the top of his own game.

We checked in with Ricky to hear about his weekend, what this win means to him, and spending time with his teammate and off-road icon, Juha Salminen in preparation for the upcoming FIM Enduro World Championship.

Congratulations on your win! How was the race?
Thanks. The conditions were absolutely perfect. We managed to get the only two sunny days there are in England. The first round was crazy because it was frozen solid! Fortunately the first and second weekends were two totally different races. Like I said, the conditions were amazing, and I really enjoy the format.

Is it a relief to get this first win out of the way?
A little bit, yeah. I was definitely a little nervous, especially racing in this format. Each time you go out, you have to be 100%. You can’t make a mistake and it literally comes down to split seconds that can win or lose the race. It’s definitely different from American style off-road where you go out and race for a couple of hours and usually you know how your race is going, and you kinda settle in. Whereas this, you go out and you have to be flat out every time, and you want to know test times when you come in and stuff like that. It was a bit more nerve wracking. At the same time, I was nervous to not screw it up! [laughs] It’s different, but I think it’s super fun.

The other day you Tweeted that you were going riding with Juha Salminen. How was that?
We didn’t end up getting to ride together that day because it rained too much. He needed to break in his race bike before they put it in the box to ship out, so he ended up going to this indoor Arenacross-style track around here. I ended up going out in the hills and getting a day of full-on mud practice in. We got to sit down and chat for a couple of days, but I didn’t ride with him.

Did you take anything away from just spending a couple days with him?
Yeah, definitely. It’s always fun to pick his brain on certain things. We also got to talk about races that we’ve done [together] in the past. He did one or two WORCS races when he was doing his American tour so we talked about a few of the races that we’ve been at in the past. It was good to catch up and I’m looking forward to the first World rounds – racing with him and all the guys.

Even though you’re back on top of the podium, your team feels like there’s still a way to go before you’re personally on top of your game. Do you agree?
Yeah, absolutely. It was a big win, obviously, but it’s a small piece of a much bigger puzzle that we’re building toward. It felt good to win and it was satisfying, but there’s always the bigger goal to chase after. If anything, this was just a good boost for my personal confidence, and encouragement to keep working hard. I have been working hard since I’ve been over here. I’ve had some small setbacks with the twisting of the knee and all that, but that’s finally not an issue anymore and out of the way.
It feels like we’re finally starting to see the light at the end of the tunnel. It’s getting a lot brighter. My manager, Riff, has been working with me and he knows the hard work that I’ve put in, and how many times we’ve just been knocked back down. Everyone experiences hardship and tough times in their life, and it’s really been crazy how much work and effort we’ve put in, just to have more roadblocks in our way that we have to keep tackling. To finally be able to win this race is a breath of fresh air, but at the same time, there are much bigger goals.

Speaking of roadblocks, talk about your recent knee injury.
It happened exactly six weeks ago now. I was practicing with [Alex] Salvini down at his place. We were just having fun, filming video, and I had to do a photoshoot for Husqvarna that day. We were really just having a fun day, and out of nowhere, I tweaked my knee doing something really stupid. I don’t know why, but it seems like I always make my biggest mistakes when I’m not being serious, kinda like when I broke my arm on the parade lap in ’07. [laughs] Stupid things happen when I’m just dorkin’ around!
I didn’t do anything serious to it – if anything I just strained it or stretched it kind of like a minor dislocation. I needed a couple of weeks for the swelling to go down and just chill out. When I did the first round of the Enduro Sprint in the UK, I dabbed it and stretched it again. It really freaked me out and thought it was going to be one of those problems that you struggle with all year, but surprisingly it felt tremendously better extremely fast after that race. I think that race loosened it up and got the blood flowing through it. The swelling went away, and I haven’t had a problem since.

It sounds like your win was a breakthrough, but at the same time you’re not hanging too much on this result.
Yes, exactly. That’s just life in general, too. For a moment, I can stand on the podium, and yeah, I won that day. But I woke up this morning and I haven’t accomplished anything. There are goals for every day. My goal for today wasn’t nearly as big as winning that race, but everything starts over and you gotta keep plugging away.

Jordan Ashburn Interview at the first GNCC of the Year