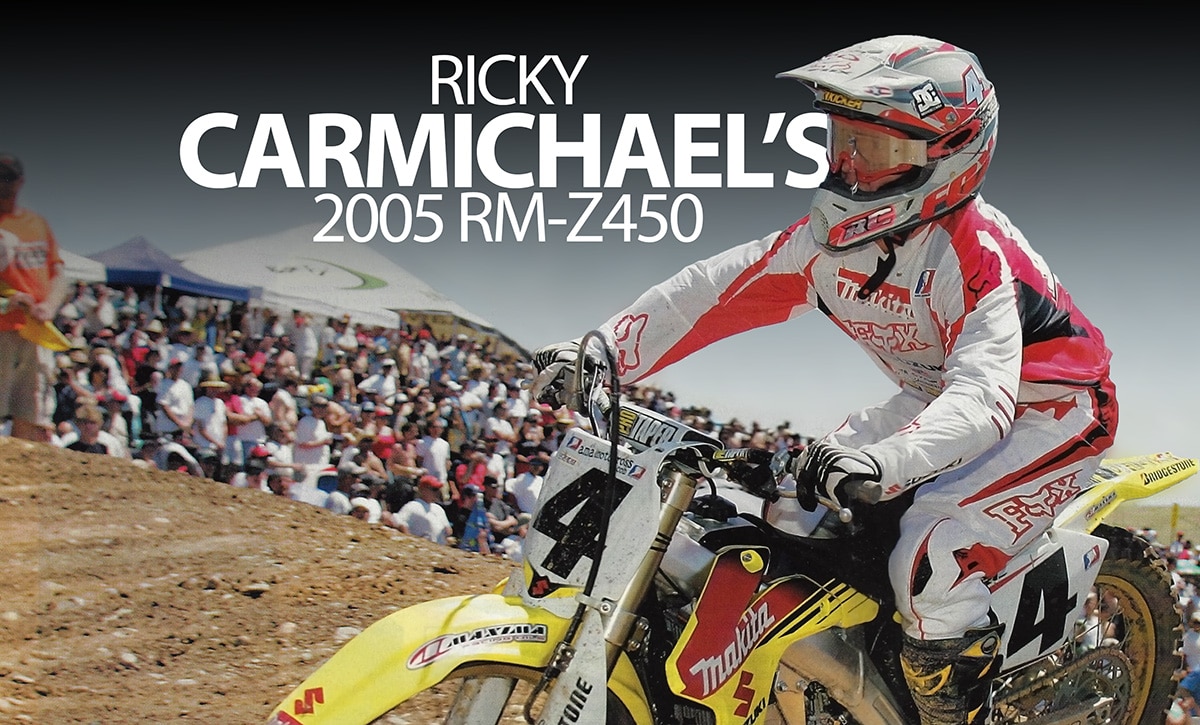 At the end of 2004, Suzuki Team manager Roger DeCoster scored the prize that every manager dreams of. He signed the greatest rider of the era–perhaps any era: Ricky Carmichael.  The problem was that he didn’t really have a motorcycle for Ricky to ride. Carmichael had just finished a perfect season on the Honda CRF450R, and Suzuki’s 450 wasn’t quite ready. In Supercross, two-strokes were still considered the weapon of choice, so Ricky would ride the RM250 there while Sebastien Tortelli developed the RM-Z450 under racing conditions. Carmichael won the Supercross title; Tortelli was 7th. At the Hangtown outdoor season opener, Ricky would ride his first race on the 450. Suzuki used its one-time production-rule exemption in order to give him every advantage. Roger DeCoster talked with us later about the pressure of perfection for the August, 2005 issue of Dirt Bike.

Things were getting crazy. In the weeks and days leading up to the first National of 2005, Team Suzuki was working like crazy. “We’re putting in 16-hour days,” said Team Manager Roger DeCoster. “We have to build a new bike almost from scratch and we only have a week or so.”
It shouldn’t have been that difficult. The Suzuki RM-Z450 already had a season of Supercross under Sebastien Tortelli, so you would think that it would just be a matter of getting Ricky Carmichael used to the four-stroke. But two factors complicated things:
1. Motocross is not Supercross.
2. Ricky Carmichael is not Sebastien Tortelli.
The matter was made even more difficult by differing sponsors. Tortelli had a Yoshimura deal and Carmichael was with Pro Circuit. But most of all, the problem was that Suzuki had to deal with the pressure of perfection. It had been a very long time since Carmichael had lost an outdoor race.

The Supercross schedule was so demanding toward the end of the series that the development of the new RM-Z had to be considered a lower priority. The championship was Ricky’s to lose. If he was injured while testing, it would have been a disaster. Yet there was much work to be done. Suzuki had elected to use its one-season exemption from the AMA production rule. The logic was simple: since the RM-Z was a first year model, the team thought it would be safer not to be bound to the stock frame and engine cases. If problems surfaced, they wanted to be free to correct them. As it turned out, no serious flaws came out, but it would have been a huge waste of the one-time allowance to just use production-based stuff. They might as well go all out to give Ricky an advantage.
So different frames had to be tested. Ricky tried different displacements, up to 460cc. There were also different gearboxes–not only different ratios, but different numbers of gears. Tortelli was able to try several different configurations during the Supercross season but, as it turned out, Ricky didn’t care for the Frenchman’s set up. “Sebastien always wanted more power,” said Roger. “Ricky wanted the bike to be smoother. He was willing to give up some of the peak power.” The pressure to get it right before the season started was even greater than usual because, oddly enough, Carmichael was likely to win on anything. “When Ricky wins, he doesn’t want to change anything,” said DeCoster. They had to get it right from the beginning.
The team settled on a configuration in the week before the outdoor season started. But then unexpected problems began to surface. The bike started missing when it got hot. In supercross, heat related problems were never an issue. But as winter turned into spring, ambient temperature increased and the bike behaved differently. “We made some changes between Tortelli’s bike and Ricky’s bike, so we weren’t quite sure if it was weather-related or something we did. It could have been a different pipe for all we knew,” said Roger.
As it turned out, the problem was fuel temperature. On 90-degree days, the fuel was being superheated before it got into the motor. It was an easy problem to fix, but it required another day of testing in a time when days of testing were a rare commodity.

In its final configuration, Team Suzuki’s RM-Z450 was far more production-based than it needed to be. The bike had a stock four-speed gearbox. In fact, much of the motor would have been right in line with the production rule. But the frame that Ricky liked best was a prototype 2006 production frame.
Ricky put much higher demands on a clutch than a normal human, so works parts were used there. But it wasn’t a slipper clutch like the one that Chad Reed was testing on his Yamaha 450 (which is designed to reduce engine braking). Carmichael was fine with the level of four-stroke engine braking that could be attained through conventional means. The bike used works Showa suspension components (just like Suzuki’s production-based race bikes) and it was held to the same weight limit and fuel restrictions as everyone else.
So did Suzuki waste its one-time exemption to the production rule? Not really. The rule was designed for just this purpose, to allow a manufacturer to develop a new bike. The RM-Z was new and like all motocrossers, it was under development, despite the fact that a production bike is already for sale. It’s just that in the case of the RM-Z, Suzuki really could use its racing effort to help develop next year’s model. Isn’t that the way it should be?

In the end, Ricky Carmichael’s outdoor season wasn’t quite perfect, but it was close enough. He would win by over 100 points. For Suzuki, it would be their greatest year in racing since the Mark Barnett Era. For Carmichael, it would be one of the greatest overall years in a career filled with greatness.