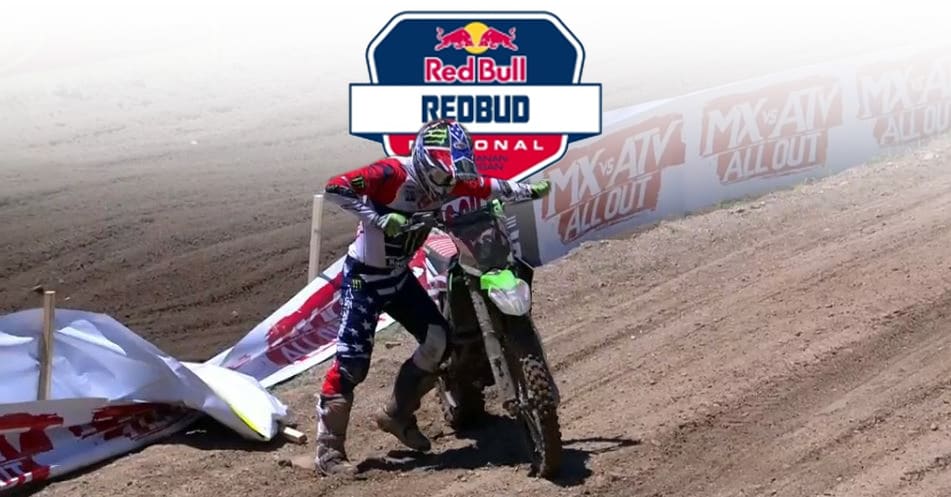 There was a big shakeup in the Lucas Oil Pro Motocross series at Redbud this weekend. Eli Tomac came in with a huge points lead in the 450 class and left without it, while Marvin Musquin took his second win of the season as well as the overall points lead. Here’s how it came about:

As the riders rounded the first turn, Blake Baggett emerged with the holeshot, with Lorenzo Locurcio in second and Eli Tomac in third. A mistake from Locurcio allowed Tomac and Phil Nicoletti to move past him, and then a crash from Baggett gave the lead to Tomac.

Once he took the lead, Tomac started to pull away. Marvin Musquin and Justin Barcia had both gone down in the first turn of the race in separate incidents, so they — like Baggett — were focused on salvaging positions instead of challenging Tomac for a win. The only rider who appeared capable of mounting a challenge to the Monster Energy Kawasaki rider was Ken Roczen. Despite getting held up a bit by Musquin’s first-turn crash, Roczen worked his way up to second place after a few laps and got the deficit to under five seconds.

Tomac was running at a much faster pace in the later stages of the race and built himself a huge lead, but with three laps to go, disaster struck for the points leader. Tomac’s rear wheel stopped rotating, and he could do nothing as he sat on the side of the track while everyone else went around him.

That misfortune allowed Roczen to inherit the lead, and he closed out the final laps to take the checkered flag. Finishing in second place was Musquin, who battled hard through the field after his first-turn crash. Benny Bloss ended up on the podium in third, and Barcia and Baggett bounced back for top-five finishes after their own first-lap issues.

And just like that, the championship race has gotten a lot tighter. Thanks to Tomac’s DNF and Musquin’s resilience, there was a 22-point swing between the two riders in just this moto. That means that Tomac’s 32-point lead is now down to 10 points entering Moto 2.

For the third time in four motos since returning from injury, Justin Bogle grabbed the holeshot. Marvin Musquin and Ken Roczen soon moved toward the front and engaged in a back-and-forth battle for second place. Musquin emerged with the position, then overtook Bogle for the lead. As he came under fire from Roczen, Bogle tipped over and fell all the way back to 36th.

Meanwhile, Tomac’s struggles continued. Because of his DNF in Moto 1, Tomac had a bad gate pick for Moto 2 and was unable to get a good start. That forced him to come from 18th place to salvage as many points as possible. After racing his way up to sixth though, Tomac went down and lost several positions. To make matters worse, he needed to pull into the pits to get the bike straightened out after the crash. As a result, he needed to come back yet again — this time from about 12th place.

Up front, a lead pack emerged as Musquin, Roczen and Justin Barcia settled into the top three spots. Things stayed close for a while, but no real battles materialized until the final lap. That’s when Barcia caught up to Roczen and tried to do whatever he could to make the pass for second place. The factory Yamaha rider eventually found an inside line that allowed him to move around Roczen and take the position, but neither rider had an answer for Red Bull KTM’s star Frenchman. Musquin (2-1) won a moto for the fourth straight week and the overall for the second straight week.

And most importantly, Musquin also took over the points lead — something that seemed nearly unimaginable earlier in the morning, but came to fruition thanks to Tomac’s DNF in Moto 1 and ninth-place finish in Moto 2. What was originally a 32-point lead for Tomac entering the day is now a narrow 3-point lead for Musquin entering Round 8, which will take place two weeks from now at Spring Creek.

More success for Shane McElrath — on the opening lap of the race, he overtook holeshot winner Austin Forkner for the top spot. Aaron Plessinger soon joined the fray to make it a three-way battle for the lead, and on Lap 2 he successfully used LaRocco’s Leap to pass Forkner for second place.

Five minutes into the moto, Plessinger was all over the back of McElrath, and when they came back around to LaRocco’s Leap, Plessinger was once again able to use the jump to make a pass. That gave Plessinger the lead, which he would go on to hold for another 15 minutes or so. By that point, Forkner — who had gotten back up to second place — was all over him and battling hard. Forkner found a line around Plessinger, but his time in the lead only lasted about 20 seconds. In an attempt to re-pass Forkner, Plessinger took an inside line that intersected with Forkner’s outside line, and the two riders collided. Plessinger stayed upright, but Forkner went down and appeared to be in some pain. He then pulled into the pits and did not finish the race.

With Forkner out of the running, Plessinger’s lead was uncontested for the rest of the moto and he took the checkered flag by a comfortable margin (even with a quick tip-over on the final lap) to score his fifth moto win of the season. RJ Hampshire finished second, a new season-high for the GEICO Honda rider, and Dylan Ferrandis rallied from 15th after Lap 1 to finish third.

As for Plessinger’s chief championship rival, Alex Martin got a strong start and was running in the top five early, but then he fell on Lap 3 and lost several positions. It was the continuation of a recurring problem for Martin, who has now crashed in six of the last seven motos he has raced. And it wouldn’t be the end of that problem either — Martin went down again while battling with Garrett Marchbanks late in the race, though he quickly remounted and was running in fifth place. A late pass on McElrath moved Martin up to fourth for the moto.

About 10 minutes into the moto, Austin Forkner — who nearly won Moto 1 before his DNF — caught Savatgy and Martin and initiated a three-way battle for second place. With the racing as tight as it was, all three riders were forced to jump LaRocco’s Leap, and after a few minutes, Martin and Forkner both got around Savatgy.

The battle then came down to Forkner and Martin, who were involved in an incident while battling for the lead last week at Southwick. This time around, the two riders avoided contact, and Forkner successfully passed Martin for second place shortly after the midpoint of the moto.

Forkner couldn’t make a run at the leader though, so Plessinger finished off the 1-1 sweep with ease. Forkner, Martin, Dylan Ferrandis and Savatgy rounded out the top five in the moto.

The pair of moto wins also gave Plessinger his third overall victory of the season, with all three of those wins coming in the form of 1-1 sweeps. Martin (4-3) finished second overall but lost ground to Plessinger in the championship standings. The gap between the two riders now stands at 35 points as the series heads into Round 8.

Ferrandis (3-4) rounded out the overall podium for the day at RedBud.