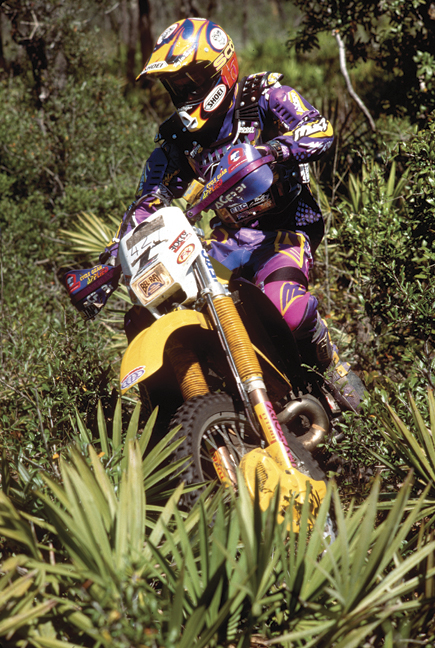 The American Motorcyclist Association (AMA) is pleased to announce the first member of the AMA Motorcycle Hall of Fame Class of 2009, each of whom will be revealed in random order over the next few weeks. Among the honorees who will take to the stage at the Hard Rock Hotel & Casino in Las Vegas this Dec. 5 will be seven-time AMA National Enduro Champion Randy Hawkins.
‘In the world of off-road racing, one of the toughest sports on the planet, there are few who can match the stellar accomplishments of Randy Hawkins,’ said AMA President and CEO Rob Dingman. ‘From the late 1980s through the ’90s, Randy made it look easy, dominating the AMA National Enduro Championships, while carrying the flag proudly in international competition.’
AMA Motorcycle Hall of Famer Jack Penton, co-chairman of the AMA Motorcycle Hall of Fame Off-road Committee, added: ‘Randy is one of the most worthy off-road riders, and his record and the amount of time that he’s contributed to the sport are just phenomenal. Most fans know that Randy’s a seven-time AMA National Enduro Champion, but he’s also an 18-time rider at the ISDE (International Six Days Enduro), many of those times on the Team USA Trophy Team. That puts Randy in the top 10 in the world in ISDE appearances, and it’s part of the reason he’s successfully mentored so many other riders over the years.’

Hawkins grew up in Travelers Rest, S.C., where he still lives today. His first race was a motocross event in 1976 in River Falls, S.C. That race launched a career that would see Hawkins win multiple AMA National Enduro Championships, 13 ISDE gold medals and 73 AMA national victories. Today, Hawkins is the team manager of Am-Pro Yamaha, which competes in the AMA National Enduro Championship, the Grand National Cross Country Series, EnduroCross and AMA Regional Hare Scrambles Championships.
‘To think that I started riding a motorcycle for fun, never dreaming it would be a career, then to have it become my entire lifestyle, and now to receive this honor is just very humbling,’ Hawkins said. ‘The off-road racing industry is so friendly, so family-oriented, and I’ve met so many wonderful people throughout my career that I feel truly blessed to be associated with all the other great riders in the AMA Motorcycle Hall of Fame. I’m excited about it, and I’ll do whatever I can to help carry the banner. This sport has given more to me than I could ever give back, and I want to be involved as long as I can.’
This will be the first time the AMA Motorcycle Hall of Fame induction ceremony has been held outside of Ohio, and Don Rosene, chairman of the AMA Motorcycle Hall of Fame Induction Committee, said that he’s looking forward to this year’s event more than ever.
‘Every year when we put this program together, we look for ways we can improve it,’ Rosene said. ‘It started out in a ball field. Then we moved it to a hotel in Columbus, Ohio, for several years, and now we’re going to the Hard Rock Hotel & Casino in Las Vegas. It just keeps getting better.
‘I’ve been involved with motorcycles since 1954, and this is so exciting for me,’ Rosene said. ‘When we announce this year’s class, anybody who has ever been involved in motorcycling will see this as the once-in-a-lifetime opportunity that it is. This is always such a nice ceremony — I get chills when these guys and gals are announced — and this year, it will be incredible.’