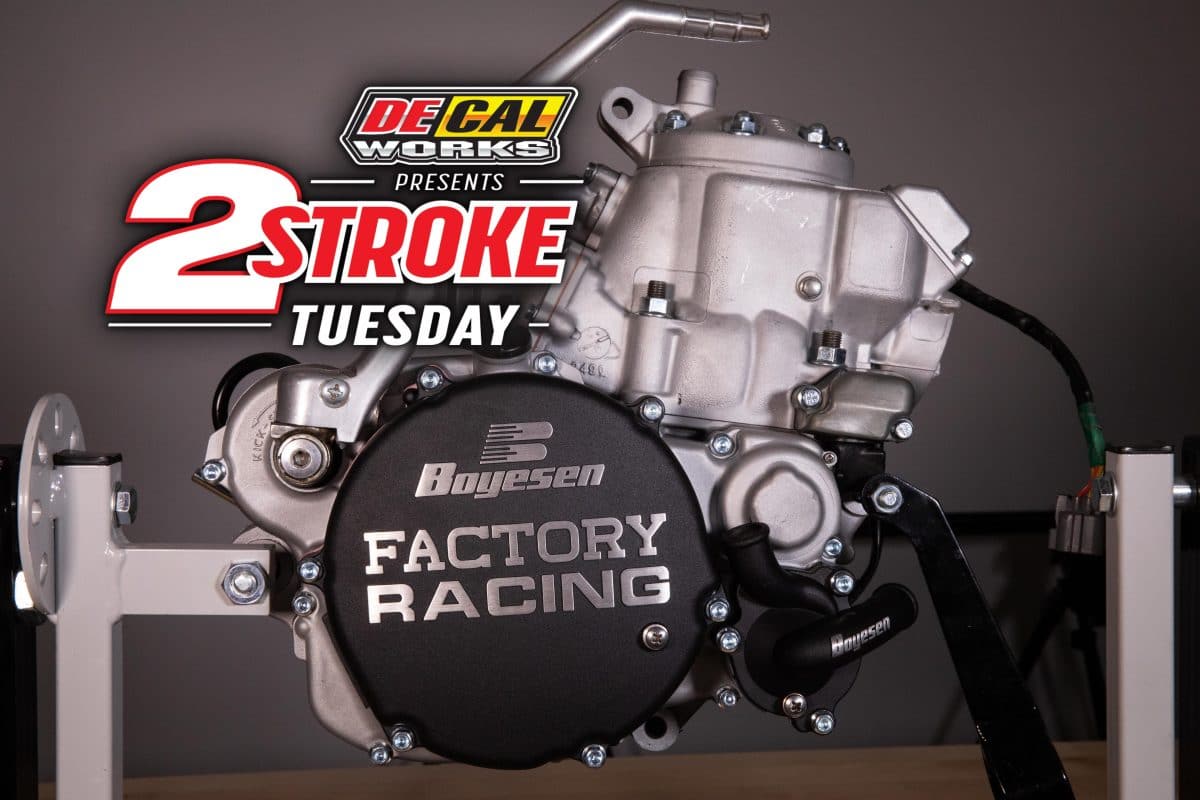 On this week’s Two-Stroke Tuesday brought to you by Decal Works Kevin Bailey from Race Winning Brands give us an exclusive behind the scenes look at our 2003 Kawasaki KX327 project being built right now. This machine was originally a done back in the early ‘2000s for a magazine and now it’s back for round 2. Don’t miss the link at the bottom of this post to our 1996 KX250 rebuild. 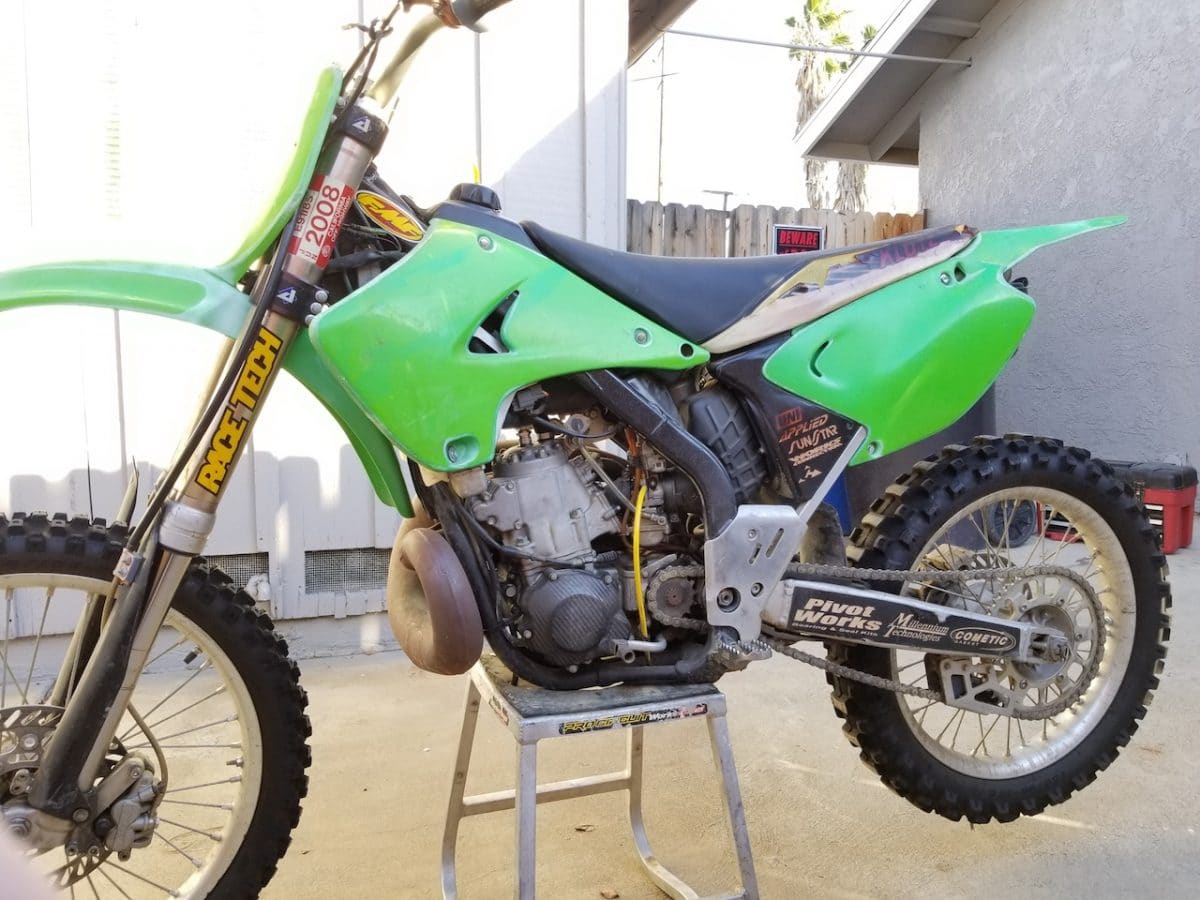 Needless to say, our 2003 KX327 project was found in the typical “needs a little TLC” condition. One of our favorite features were the open wires where the kill switch used to be. Who knows how long it sat outside exposed to the elements, but judging by the sunbaked seat cover and airbox graphics, we’d say it was quite some time. 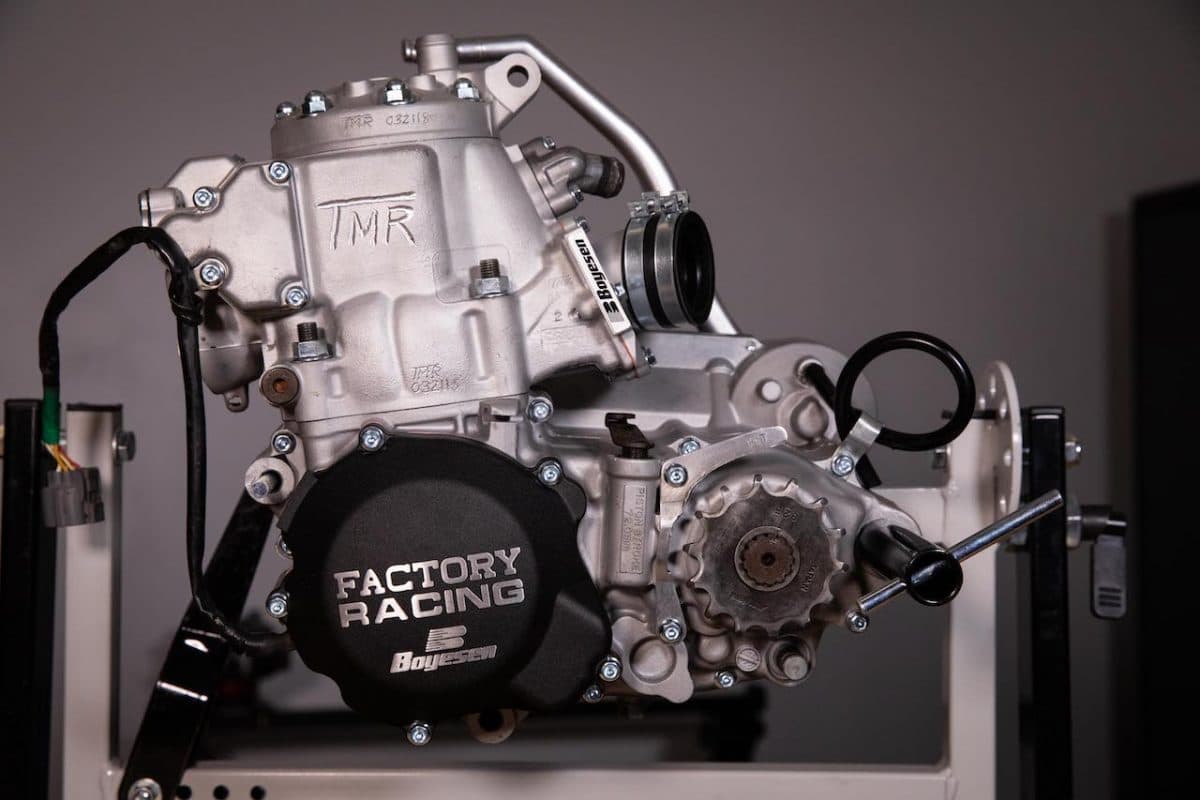 After teardown, one of the first things addressed was the engine. This bike’s powerplant was originally built by Tom Morgan Racing with an overbore and long-rod design to achieve 327ccs. We reached out to Tom and he happily obliged to help us get the engine freshened up. 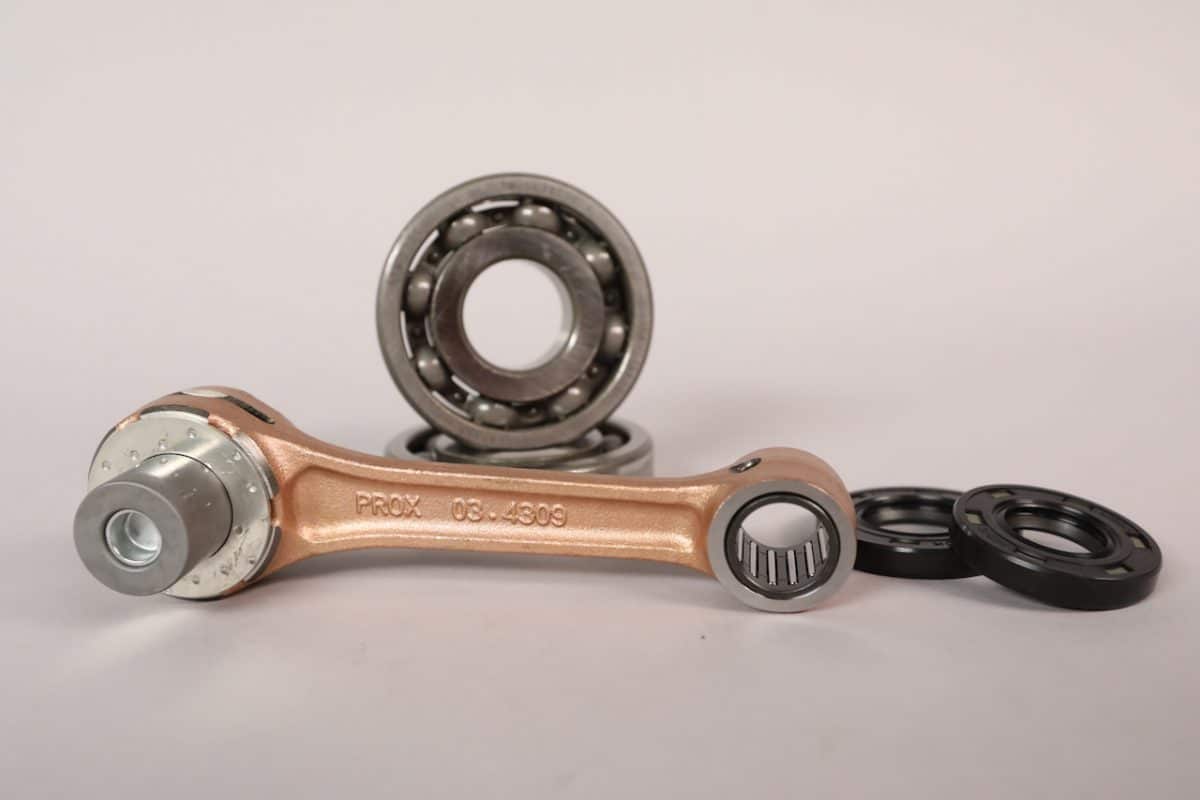 This time, it received a stock-length ProX connecting rod, ProX main bearings and seals, a cylinder bore. and replate by Millennium Technologies, and a custom Wiseco piston made specifically for TMR. 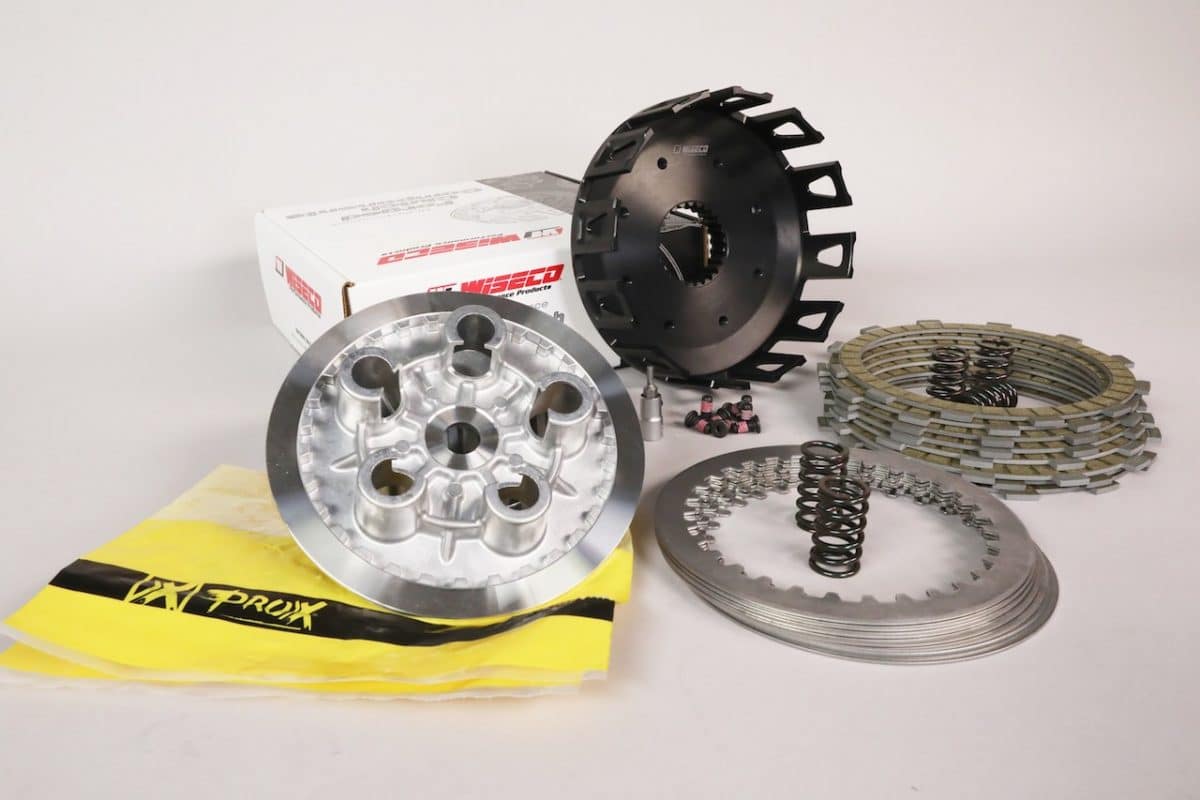 The clutch was completely freshened up with a Wiseco basket, plates, and fibers, and ProX inner hub and pressure plate. 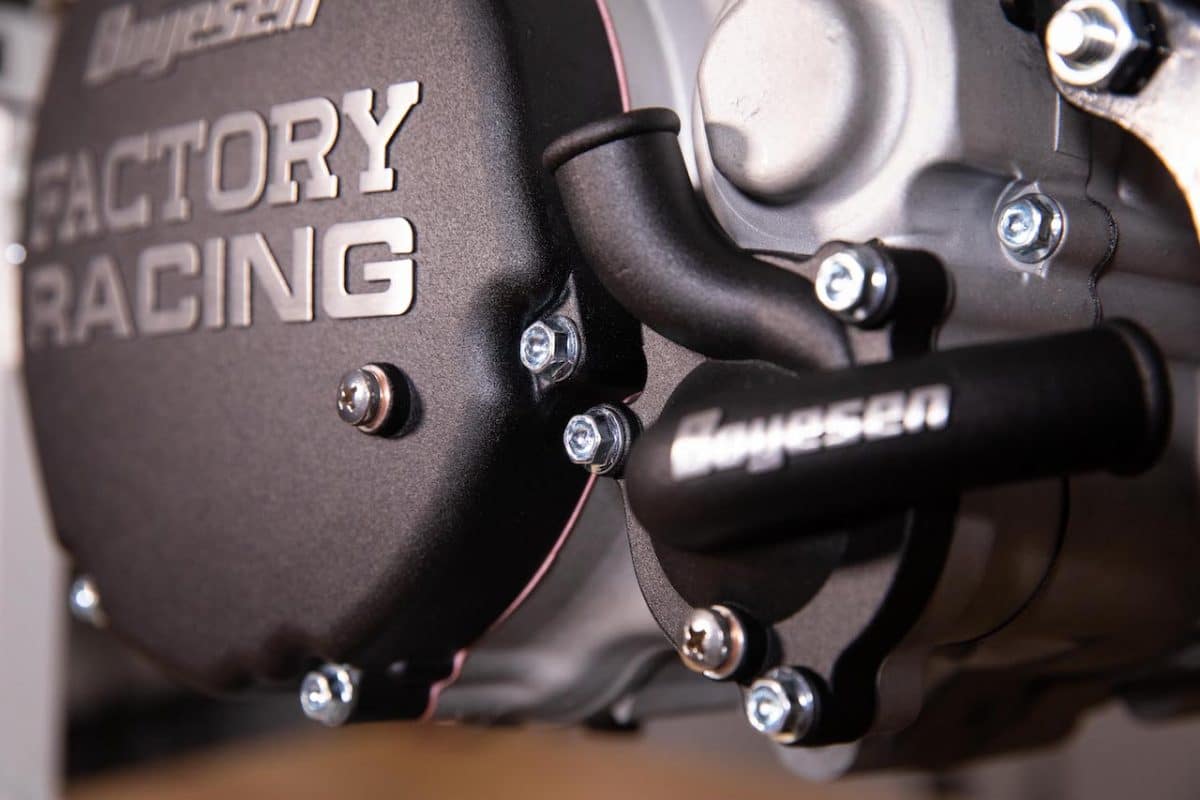 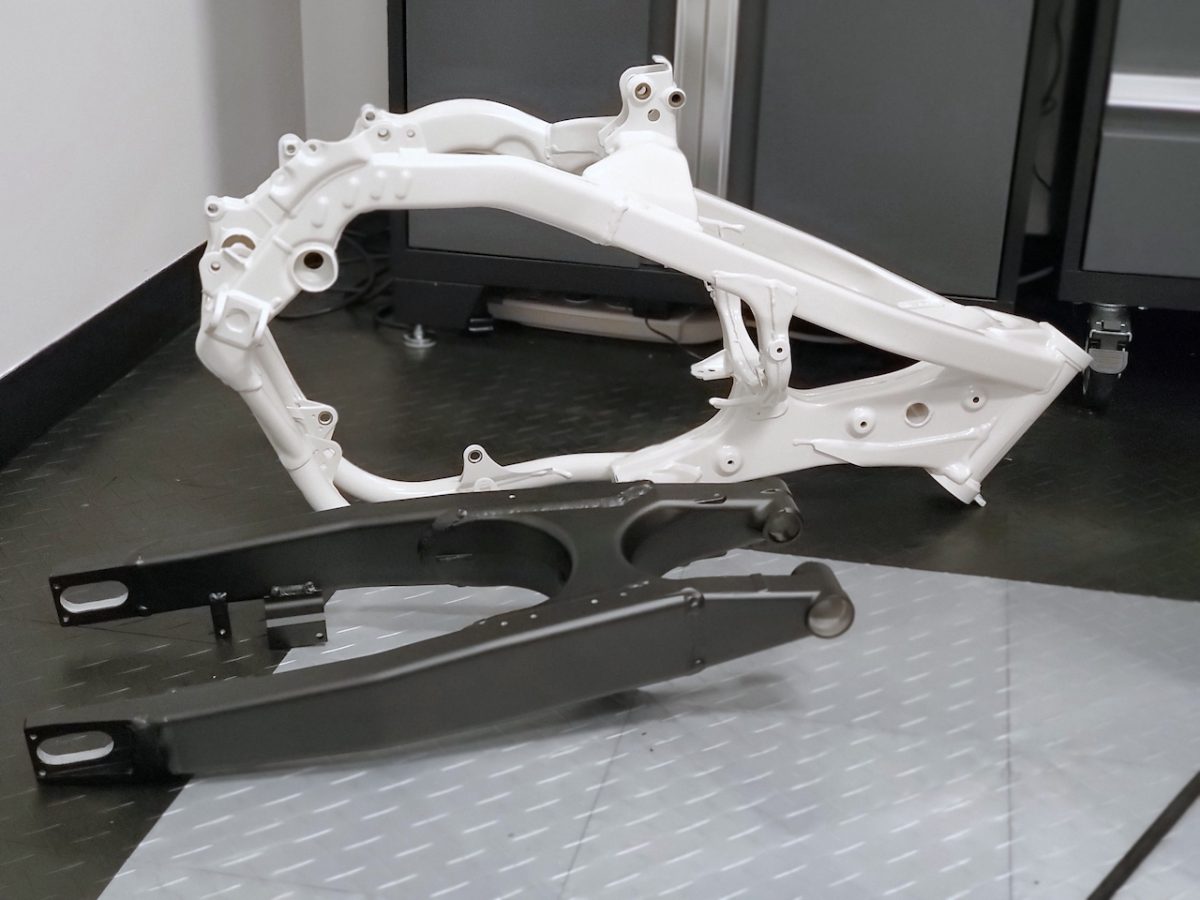 As cool as the black with gold sparkle frame was on this bike, we decided to switch it up and go with a cement gray powdercoat completed by the folks at Specialized Coatings in Huntington Beach. After searching for months and setting up listing alerts, we finally came across a used swingarm that was in decent condition to replace the cracked swingarm that was on the bike. Note to self, restoring standalone model year bikes comes with obstacles. Specialized Coatings also did a nice matte black on the swingarm. 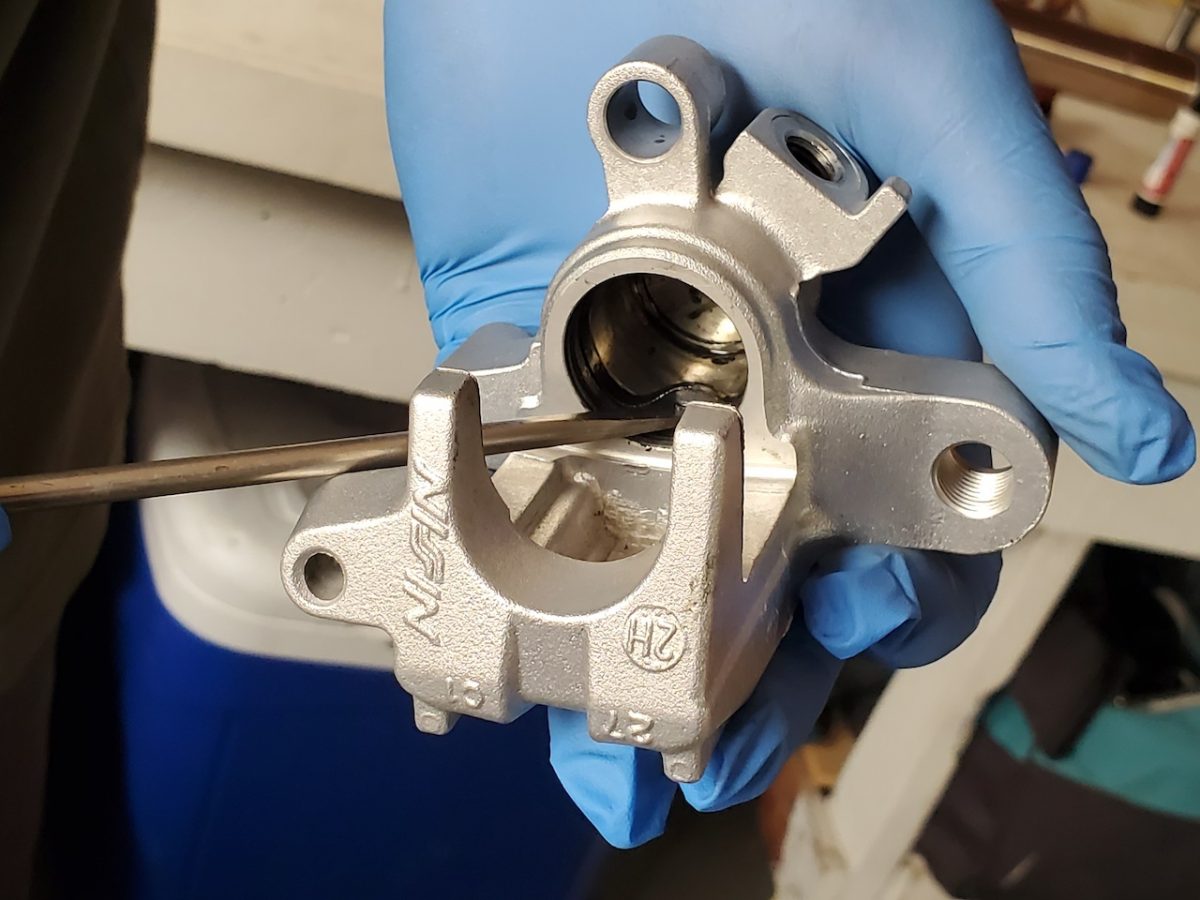 Make no mistake, there is not a rebuildable item on this bike that isn’t getting rebuilt. The brake calipers are getting freshened up with rebuild kits from ProX Racing Parts, as are the front and rear master cylinders and linkage and swingarm bearings. Secondly, let’s take a moment to appreciate how amazing-looking parts always turn out when we clean them up with our vapor blaster from Vapor Honing Technologies. We also hit the linkage knuckle, subframe, head-stays, and master cylinders. 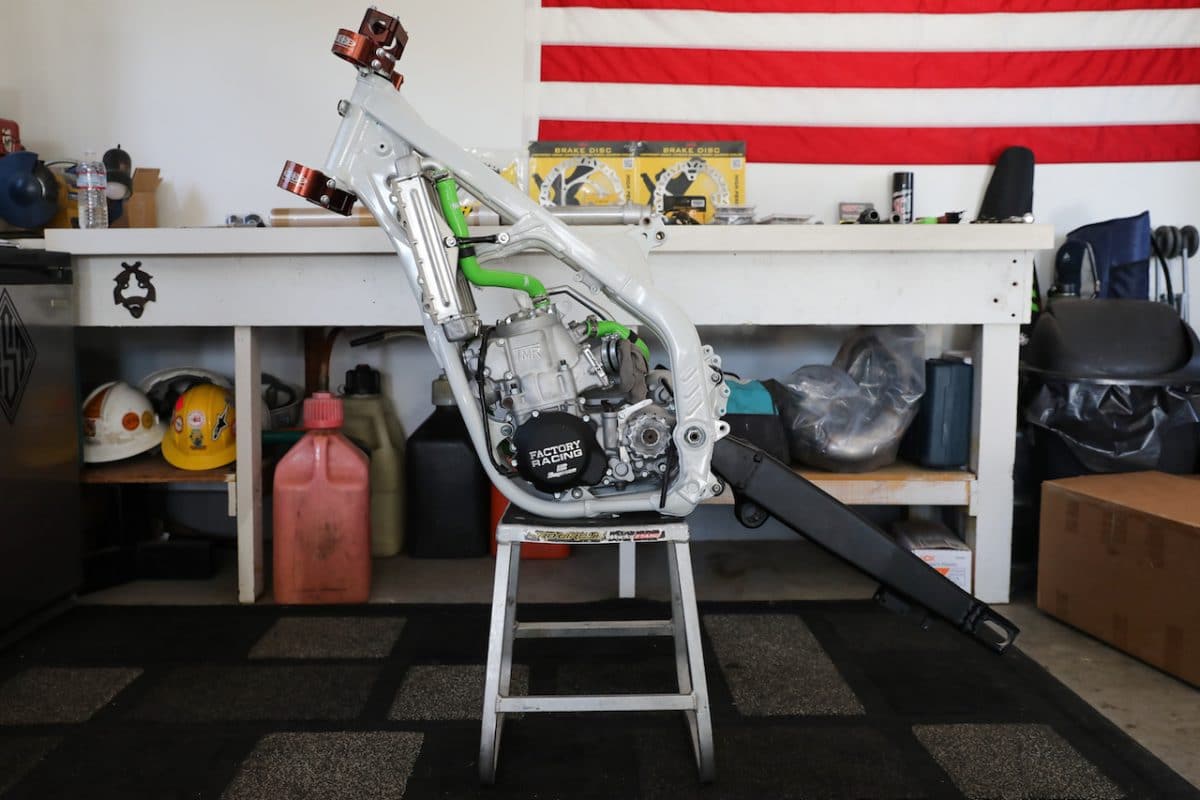 The slow-but-sure reassembly process has begun. It may not look quite like a dirt bike yet, but the classic-colored Pro Circuit triple clamps and Kawi-green Samco Sport radiator hoses are already setting this bike off. Much like with the engine, Bolt has been a lifesaver with their complete kits that allow us to replace just about every fastener on this bike. Soon, we’ll be fitting up some fresh Race Tech suspension, a Lectron carb, UFO plastics, Faster USA custom wheels, a non-sunburnt seat from Seat Concepts, and another handful of goodies from ProX.

With this 1996 Kawasaki KX250, our main goal was to find an off-road bike that the average person could afford to not only build, but then ride on a regular basis. We teamed up with Moto One and Western Powersports in Boise, Idaho, to see if it was possible.