A DUEL TO THE END! PHOTOS AND STORY WRITTEN BY CARSON MOORE 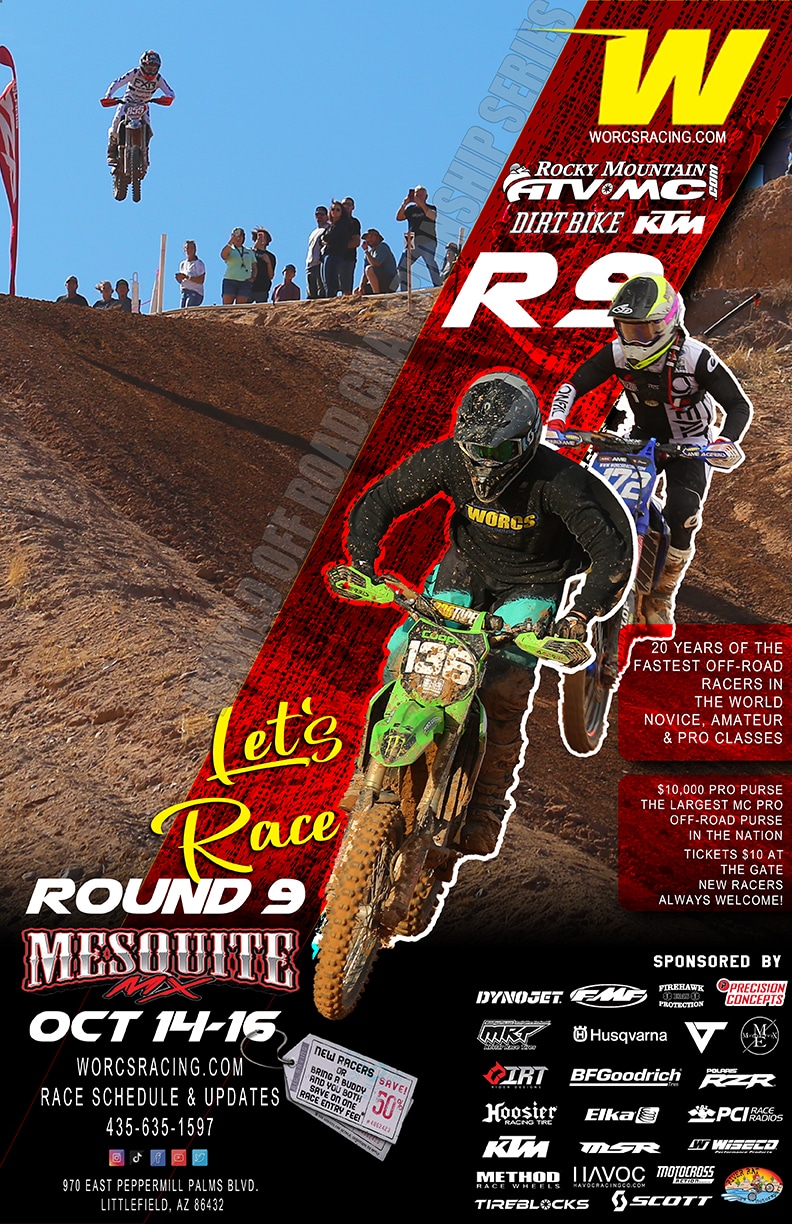 The Rocky Mountain, ATV/MC WORCS series stopped at Mesquite, MX, for round nine of the series. The course layout used the MX sections, deep sand, and high-speed areas that fulfilled a 6-mile loop on the property lines.

As the field lined up on the gates at Mesquite MX, it would be Factory Honda rider Chance Hymas grabbing the hole shot and leading out of the MX section. Oliveira found his around the Honda rider and led the opening laps.

Austin Walton aboard the Rockstar Energy Husqvarna trailed only Oliveria, opening up a substantial gap. The battle ensued between the two, at times only being bike lengths apart for most of the race. As the closing laps started, Walton laid it over in a corner giving the room needed for Oliveria to bring home another Pro win and the Championship.

Third place went to Dare Demartile aboard his Beta Racing bike, which marks his 5th podium of the season, and rounding out the top five was Tyler Lynn on his Precision Concepts Kawasaki and Tallon Lafountaine aboard his SLR Honda machine In Pro 250, SLR riders Noah Viney and teammate Jack Simpson rounded the first turn in a 1-2 punch leading the opening lap. Simpson found his way around Viney and put himself in the lead. Mateo Oliveira settled into a pace, finding himself around Viney and Simpson, overtaking the lead on lap three from the Honda rider.

However, three Brothers Kilmartin Racing Husqvarna rider Kai Aiello had a rough start. He would find himself at the back of the pack when the race started and saw himself working through the pack until he settled in for third. Aiello was lightly challenged by his teammate Aeck but held on for the final podium position.

Pro-Am Points leader Collier Martinez had a practice crash a few weeks ago, breaking his wrist; the points leader was forced to sit out at Round 9 and watch his competition duke it out. With Martinez out, it allowed Jace Allred to shine in the class, where he led from start to finish. Behind Allred was Brandy Richards, who locked up her women’s pro championship the day before leading the KTM squad to three Pro championships at WORCS this year. Additionally, we had a new entry in third place, with Jason Fichera racing in his first Pro-AM. He would make an impressive comeback as he was in ninth place after the first lap but made his way through the competition until he found himself on the podium in third place.

Thank you to all the competitors, sponsors, and everyone who came out to Mesquite this past weekend. We hope to see everyone at the final round in Primm, Nevada, on November 4th-6th.