Race Around the Lake returns! 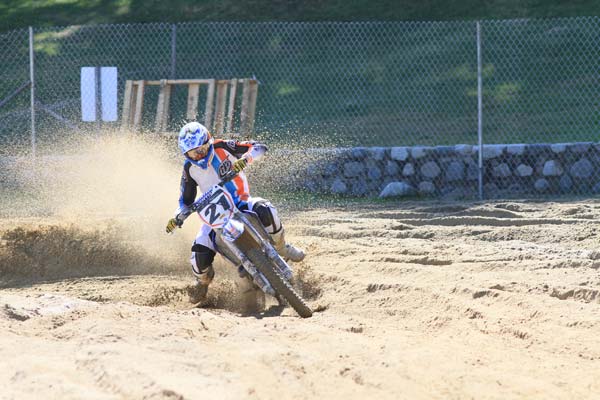 Race Around the Lake

The biggest classes for the weekend were the Vet divisions.

Race around the Lake returned to Castaic Lake for the first time since 2006. The event, spearheaded by former racer/Dirt Bike tester and promoter Shane Trittler features a wildly fun circuit that uses the trails, roads, walkways and actual beach areas to the county park. Shane builds a small, user-friendly motocross track that mates to the trails, meandering 4 to 5 miles through the county park. The entire venue is one of the most unique races in the country where fun and camaraderie are stitched to dark woods, high speed beach racing and slick track smooth walking paths where one stab at the front brake will send you straight to the tarmac, fanny first. This year over 1100 entries invaded Castaic Lake showing that times may be tough, but folks still love their dirt bikes and will pay for the privilege to race something unique and special. We’ve attached some photos showcasing the event along with a little Q and A with Monsieur Trittler.

Racing on the sidewalks amidst the picnic tables and on lookers was interesting.

The motocross track started the fun.

When was the first RATL?

How many entries did you get this year?

How was it working with the Castaic people and were there any issue putting on the race?

I’m not really sure I want to comment about working with the County. I will say it is very challenging putting a motocross race on in a County Park that is not designed for that. But that’s what makes it this race so wild!

What was the biggest class?

The biggest class was on Sunday and it was the Vet/Senior event. I think there were around 150 riders on the start line. There was 5 lines of riders. I got an e-mail yesterday from a guy who in raced that moto. He just wanted to tell me how much fun it was racing with all those guys and everyone was having so much fun and riding so curtious. Not a word normally associated with motocross racing.

What is the biggest challenge in laying out the event?

When we are laying out the course we have remember that every single thing has to be put back exactly like it was before we got there. It takes us almost as much time to do that as it does to build it. That is the most challenging part about putting on this event.

What was the best part of putting on the event?

m not even sure I can pin down a best part of putting on this event. Riding the team race myself is up there. Seeing 200 of my friends having a blast made it worth it. But I’d have to say the riders and families really enjoying the weekend and then going out of their way to tell us how much fun they had rated the highest. Dennis, Terry, Brian Staben, Mitchell Staben, Randy Commans and Hayden Commans all basically donated so much time and effort into this event to make sure it’s the best it can be. It makes me feel good that their efforts were so appreciate by everyone

Big fun on the beach!

Lip skids were plentiful on the snot slick walkways.

Creepy tunnels hooked the sections of the track together.

Hum, a mini Kehoe in action.

The Pit bike class was a hit.

WHIBLEY ‘TREATS’ HIMSELF TO ANOTHER MOOSE RUN WIN!