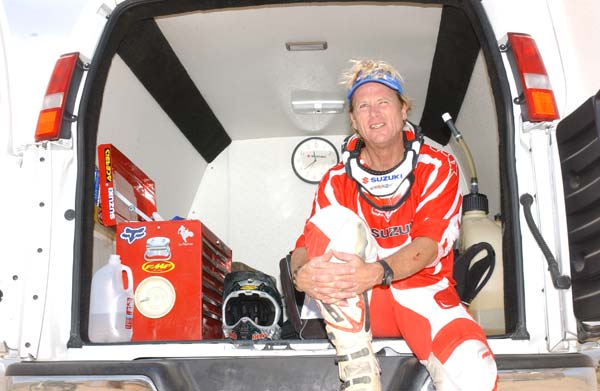 DB: So Mike Congratulations on the new gig!

Thanks, I’m looking forward to it

DB: First question, how does this affect Suzuki’s GNCC effort and who is going to captain that ship?

Our GNCC effort is solid, Shane Nalley is my race coordinator and he will step up to keep guiding things along. Our core group remains the same, with Josh Strang, Shane Nalley and Chris Wolf. We will have Rodney Smith taking care of a new program we will be starting at the GNCC’s and we hope to announce that soon.

DB: So, were you shocked about getting asked to head the Motocross effort for Suzuki? Or, in the same vein-were you stunned that DeCoster actually left?

I wasn’t shocked, but I was honored that they gave me the call. As far as Roger, the truth is, he was offered a deal, but he felt that the offer from another company suited his plans better

DB: It seems to us, that with the economies sluggishness and Suzuki’s trimming the number of machines they’ve been bringing in, mated to all of the rumors going around the you guys were getting out of racing that things in the Dungey camp might have been a bit shaky.

You can’t control the rumor mill, however, Suzuki is absolutely committed to racing, if we were planning on getting out of the racing business why did we hire Metty on a 2-year deal to be Ryan’s teammate?

DB: What’s your relationship with Dungey, the motocross team and the men behind the scenes there?

I’m really looking forward to working with Ryan, the goal is simple and one I have always followed with any rider I have worked with, build him the best bike possible, surround him with a solid infrastructure and then let him do his thing. No matter what any body says, when it comes down to it, Ryan Dungey was the man behind the bars last year, he alone rode the bike; I don’t recall anybody riding on the back.

DB: How do you see the upcoming Supercross season, especially with a lot of the injured talent returning?

I think Ryan proved he is the best motocrosser in the world right now. I don’t care about who was there and who wasn’t there, you have to be in it to win it, and he was. People can say this guy got hurt and that guy was out, but Ryan raced every race, perhaps that’s a testament to his ability to ride at that extreme edge and not step over it and get hurt.

DB: When do you guys start testing for Supercross and is there any big changes slated for the machine?

We begin testing later this month. Obviously the bike he won on last year was incredible, but you never settle, you must always look to improve.

DB: You guys have hired Brett Metcalf, thoughts on him?

I’m really stoked on working with Metty; he is such a solid, hard working athlete, very old school in his approach to his commitment. I think people love to get behind a humble hero.

DB: Any plan for a Lites program?

We have already announced Bill Keefe and the Rockstar Energy team will run our Lites program. They will be enjoying the benefit of our team resources as far as technology and parts are concerned

DB: Any final thoughts or words of wisdom?

I just want to go racing, with Ryan and Metty I believe we have the top team and our only goal is to continue to win. I also just want to wish the best and thank the people I worked with in the Suzuki Off Road team for all of their hard work and commitment over the years. We won a lot of championships and had some great times. And I know Josh Strang will be at the top of the off road world for a long time.

Rodney Smith and Mike testing in the high desert.