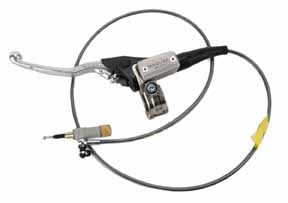 PRODUCT: European bikes like KTM and Husqvarna have had hydraulic clutches for years, but for some reason, Japan has been reluctant to jump aboard. Now it doesn’t matter; if you want to go hydraulic, you can on almost any bike. The Magura Hymec aftermarket clutch system isn’t actually new, but it has received renewed attention lately with riders like Chad Reed using it.
The Hymec consists of a master cylinder/lever with a hydraulic hose and a small slave cylinder that connects externally, just like the stock cable. In the case of the Honda CRF450R, the installation is designed to be quick and easy, without any modification. It’s a bolt-on replacement for the stock lever and cable.
POSITIVE: If you race the Honda CRF450R at a high level, consider the Hymec a must-have. The stock clutch is notoriously under designed. It heats up quickly and fails after very few hours. The most common complaint is the feel, which is inconsistent and vague. With the Magura clutch in place, all of the complaints about feel go away. The clutch engagement point is always the same, regardless of how hot the motor or how worn the clutch plates. We also found that installation and maintenance were easy. Frankly, bleeding a hydraulic clutch is a task that scares us. But we replaced the Magura system’s hose at one point and found the bleeding process to be painless with just a syringe. We’re also pleased with the overall quality of the parts. The lever pivots rearward in the case of a crash, and is made of good metal, so it can be straightened in the case it does get bent.
NEGATIVE: The hydraulic hose runs very close to the Honda exhaust pipe, and can get burnt. We discovered this the hard way, thus the need for a new hose. Once you are aware of this, the problem can be fixed with a zip-tie. Also, don’t expect Magura to fix all the Honda’s clutch problems. The stock plates and basket still wear quickly.
BOTTOM LINE: The system is expensive, but that’s not surprising. It’s a top-shelf product. The MSRP is $334.95, but it makes the Honda a much better bike. For other applications, the benefits aren’t as substantial. We know that Chad Reed and the R&D department at Honda agree and are considering a hydraulic clutch as standard equipment for 2013.
RATINGS
Installation: 9
Durability: 7
Value: 8
Performance: 10
Overall: 8
Contact: www.powersports.magura.com
Share FacebookTwitterGoogle+ReddItWhatsAppPinterestEmail

THE LIFE AND TIMES OF THE SUZUKI RM250