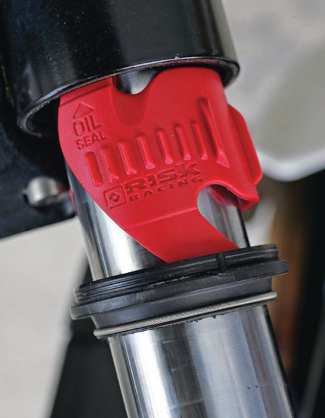 Share FacebookTwitterGoogle+ReddItWhatsAppPinterestEmail
PRODUCT:
The Seal Doctor by Risk Racing is a tool that helps fix a leaky fork seal. A large amount of leaking seals are the result of dirt being trapped in the seal. Rather than have new seals installed, the Risk Seal Doctor cleans out the offending grime, making for a tight seal once again and no more dripping.

POSITIVE:
This product works! We’ve been big believers in cleaning out seals for years simply because we hate the cost and downtime associated with yanking our forks off to get the new seals installed. We’ve mainly used 35mm film, cut them down into 3- or 4-inch strips, and then slid them under the seal and rotate. It works, but it is a pain. The Seal Doctor clamps onto the fork tube, slips under the seal and can be rotated easily. And unlike a piece of film, controlling and rotating the tool is a snap. We like to rotate the tool and follow it with a jet stream of contact cleaner for several rotations. This gets the dirt out, and truth be told, we have about 90 percent less forkseal failures than we used to.

NEGATIVE:
It’s not the end-all cure, and if you wait too long, excess damage to the seal will result and the tool won’t work. Also, it won’t fix a nicked fork tube, which is another major reason for leaky seals.

BOTTOM LINE:
This tool never leaves our toolbox! For $24.99, it paid for itself too many times to count. Now we use it as preventative maintenance tool several times a month.