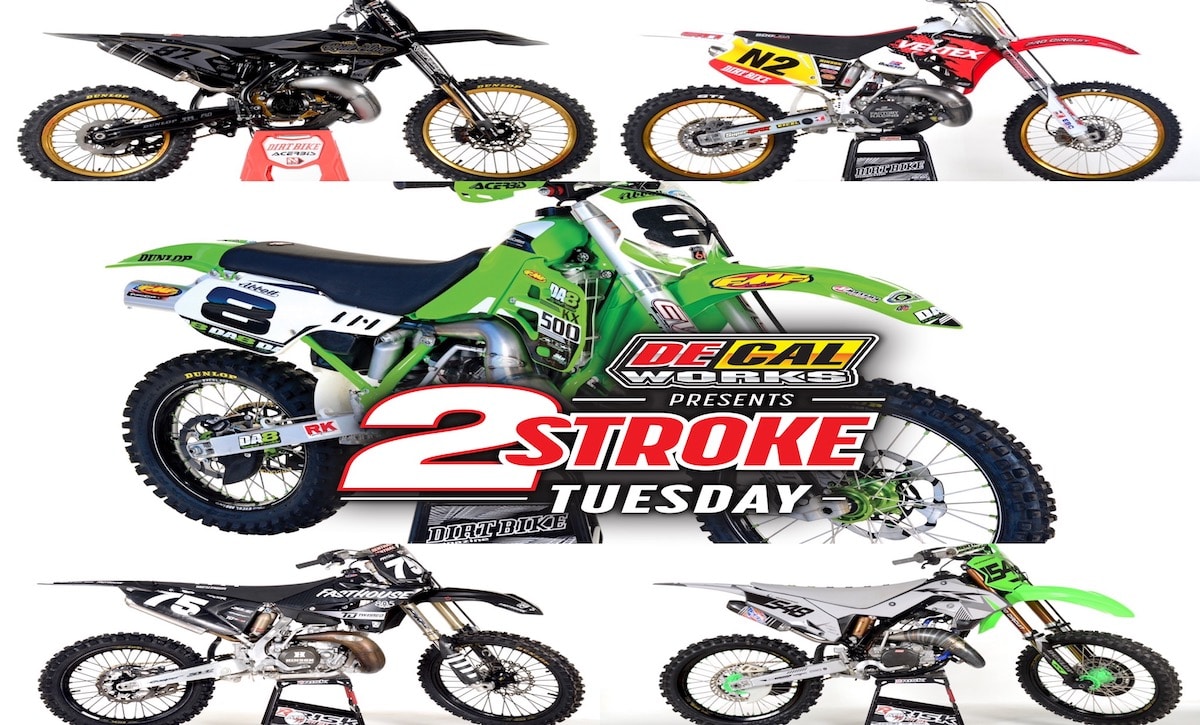 On this week’s Two-Stroke Tuesday we give you a look at our video series “Premix”, where it’s “All Two-Strokes All The Time”. This playlist on our YouTube channel is dedicated to our 2-stroke project bikes and new model videos. A little bit of everything and anything related to 2-strokes. If you want to see more head over to our YouTube Channel . Enjoy!

Editor Ron Lawson put in a lot of late night garage hours on this build and now that it’s done he is like a kid in a candy store with a pocket full of cash. Nic at Decal Works did a great job making the build stand out with a custom set of graphics.Faster USA built a brand new set of wheels featuring their billet aluminum hubs, stainless steel spokes and Honda gold Excel rims. Those were wrapped with the brand new STI Tech 2 Pro tires and heavy duty STI tubes.A complete Hinson Billetproof clutch was installed with both the top and bottom-ends being replace. Bolt-on products from Boyesen and Pro Circuit gave the twenty-three year old machine some extra grunt.A Scotts Performance stabilizer fits perfect under the ODI crossbar and we welded on a permanent frame mount. The crossbar pad did require some minor modifications.Late ’80s and ’90s CR250R owners have been requesting so many “Works” style pipes from Pro Circuit that they decided to start making them again.The seat cover and foam was in pretty bad shape. Jeff at SDG rebuilt the foam adding some extra where the stock seat dipped giving it a more modern look and feel. SDG covers are made of a rubberized gripper material.Older bike restorations like this don’t always turn out the way we want. They usually look good and run bad or the other way around. Not the Revo Rocket! It looks amazing and is a blast to ride.

Trevor Stewart’s Yamaha YZ300 Two Stroke World Championship Race Bike. This bike does have some upgrades but it isn’t over the top. With some minor revisions to the stock platform this bike can still win races. Twisted Development took a YZ250 two stroke and added an Athena 300cc kit to it to give it a boost in the power department but beyond that, this bike is very close to stock in comparison to the other two strokes on the line during the race. Dirt Bike Magazine had Trevor Stewart bring his bike out after the World Championships so we could go over some of the details and highlight his riding skills that took him to a win in the 2nd moto on race day. Enjoy a minimal amount of talking and a handful of wide open two stroke clips.

Here is your first look at our Kawasaki KX144 build with Josh Bombard. Tim Sharp was the man behind the wrenches of this project and we gotta say it came out amazing.Polisport Plastics has released a couple 2-Stroke restyle in the last few years that have changed the game! The KX version used on this build gives the 2003 machine a modern day look just like the brand new 250/450 four-strokes.Carbon Fiber and cone pipes just make everything look cooler! Light Speed Carbon has recently started reproducing two-stroke parts that at one time only made for factory teams. Scalvini makes exhaust for most popular two-strokes so a cone pipe and carbon silencer could be in your future.Companies that made this build possible include Scalvini Exhaust, Dunlop, Light Speed Carbon Fiber, Polisport Plastics, Pro Circuit, Renthal and Rival Ink graphics. Tim Sharp Race Prep was in charge of building this machine.

Dirt Bike Magazines gives you an exclusive first look at our project “Dark Knight KTM 500” built by Johny Weisman at The Ride Shop AZ. This project combines brand new KTM technology with old school Kawasaki two stroke technology and a bunch of aftermarket bolt-on items. The Ride Shop Dark Knight project is the brainchild of CEO Johny Weisman. At first glance you might not notice the blacked out Kawasaki KX500 two-stroke power-plant tucked neatly into a 2020 KTM chassis. We worked with industry leading companies like Dubya USA, Boyesen, Dunlop, TM Designworks, P3 Carbon and a host of others to make this build happen.Both the fork and shock received gold DLC coating and up front the Dark Knight has a KYB conversion done in-house by Weisman himself.Yes, that is a Kawasaki KX500 power plant and yes that is a removable clutch cover. The factory Kawasaki off-road bikes had these back in the day and Johny just happens to be Destry Abbott’s former mechanic so you know this machine is trick.We see lots of coated engine parts but this has got to be the first time we have seen a blacked out Keihin Carburetor. Check out that gold DLC coated shock shaft in the lower right hand corner of this picture.Weisman hasn’t come clean with all the internal modifications to the engine yet but stay tuned for the complete story in an upcoming issue of our printed magazine.

This is just part 1 of what we shot with Destry. Enjoy the sweet sound of his updated KX500! The 2nd part you will be able go get up close and personal with the bike as well as hear about all the trick parts Destry put on it ! For more head over to our YouTube channel.