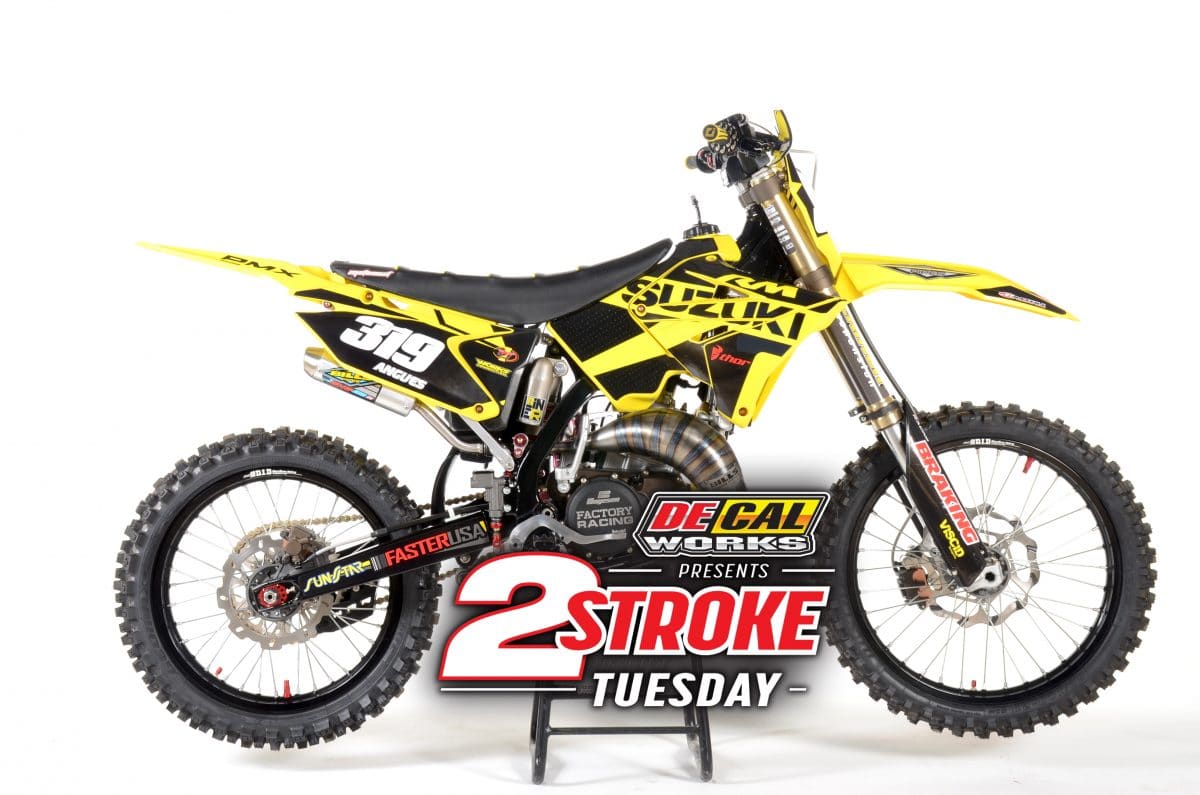 On this week’s Two-Stroke Tuesday brought to you be Decal Works we give you an exclusive first look at the PMX Racing 2004 Suzuki RM125 project in the Dirt Bike Magazine studio. We also let builder Shiloh Angues tell his story about the build. 2-Stroke History this week is all about the Suzuki RM250 and we have an insane Yamaha YZ125 project from the crew at Faster USA featured in this week’s Behind The Build section. 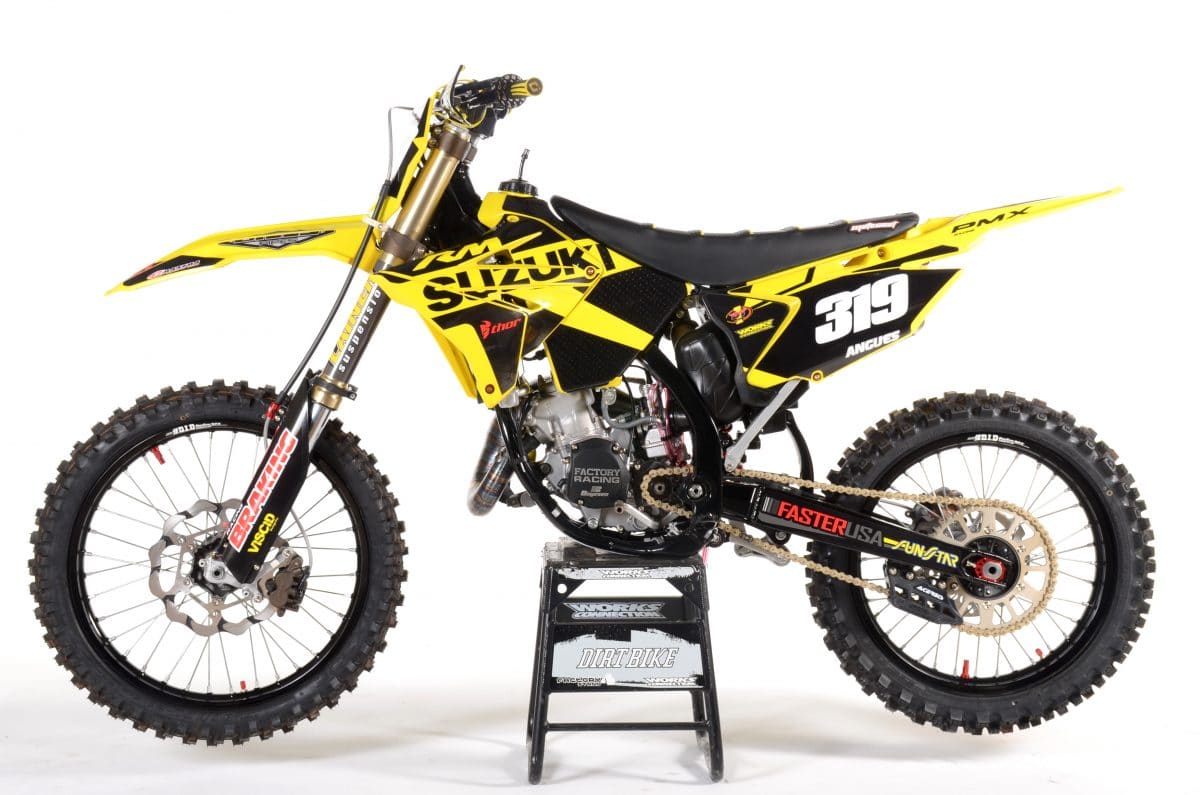 The bike is a 2004 Suzuki RM125, my wife Jill has owned it since 2005. The bike saw many year of riding and racing until 2012 when my wife transitioned to an RMZ-250. Since that day the bike sat under a sheet in the garage until November 2019 when we decided to build it for the upcoming world 2 stroke championships. Looking to build a bike in 4 months was a daunting task however my wife and I  were committed to the build and so with that started tearing it apart. 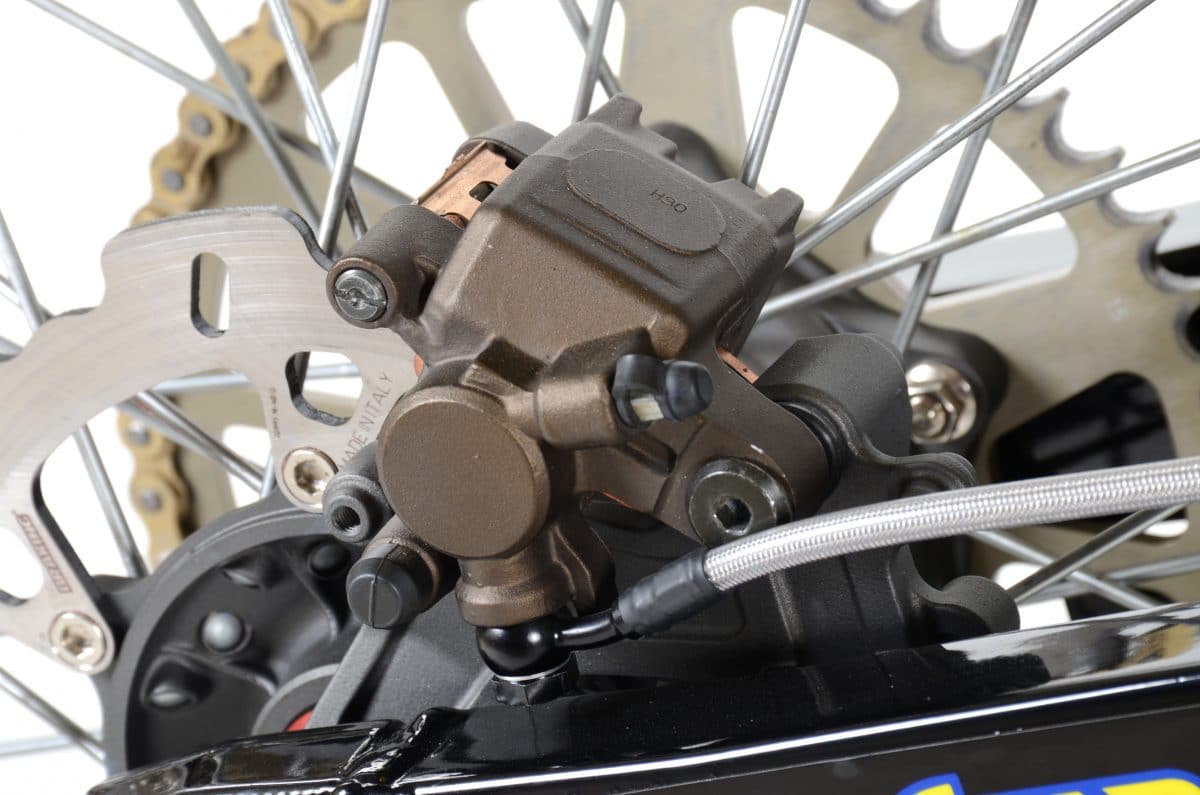 The frame and swing arm were stripped and powder coated gloss black. In parallel to the frame getting worked we stripped down all of the other components from the brake system to the various engine / suspension components as well as the wheels and headed over to Faster USA to have them perform there vapor blasting and cerakote process. 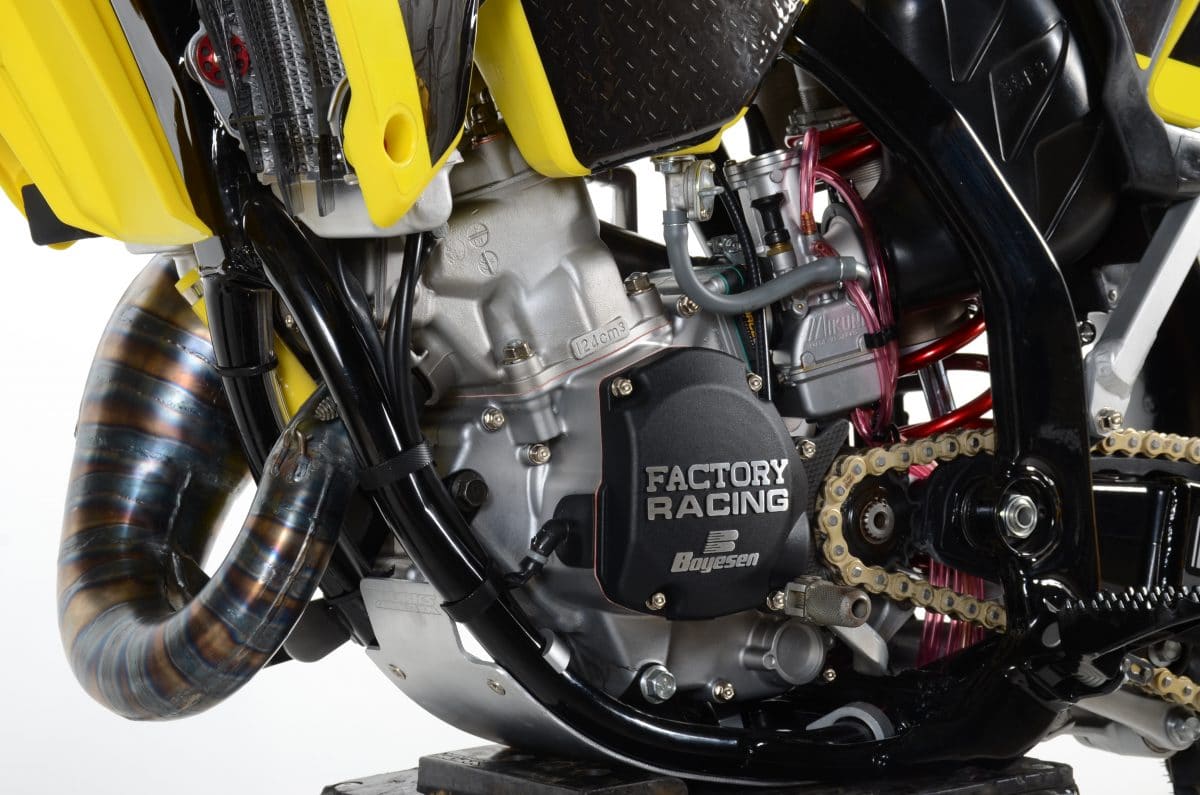 Next, we headed to the internet and sourced all the OEM parts from Rock Mountain ATV and some ProX parts from eBay. In addition, we reached out to Spec Bolt and ordered a full bike replacement kit using their Nickel Wurks hardware. Through our racing effort we have created great relationships with our sponsors so we reached out to them to see what was available for dated machine and started ordering what we could. 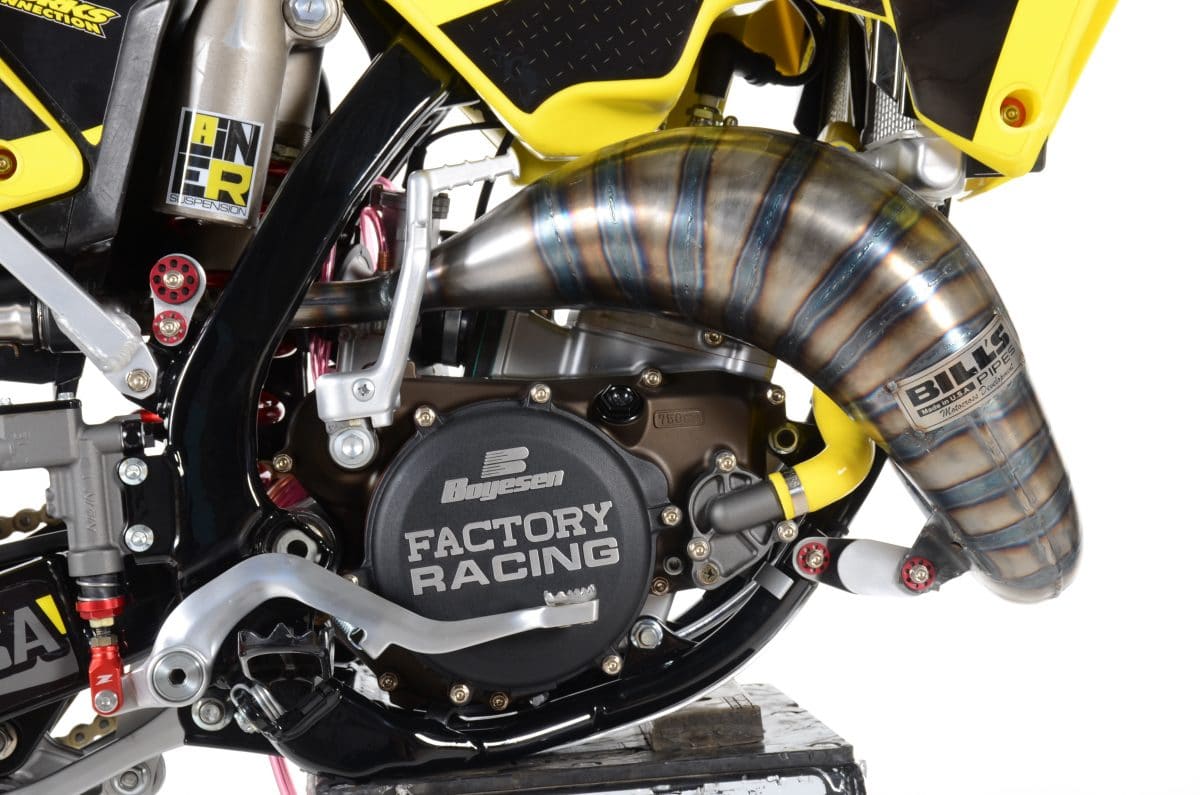 For the moto and pipe package we headed over to Billspipes and Jeff Springman fabricated one of their cone look pipes and silencer and dropped in a fresh Wiseco Piston. Note: the motor was built back in 2010, the head was ported / polished, millennium did the coating Nickel Silicon Carbide 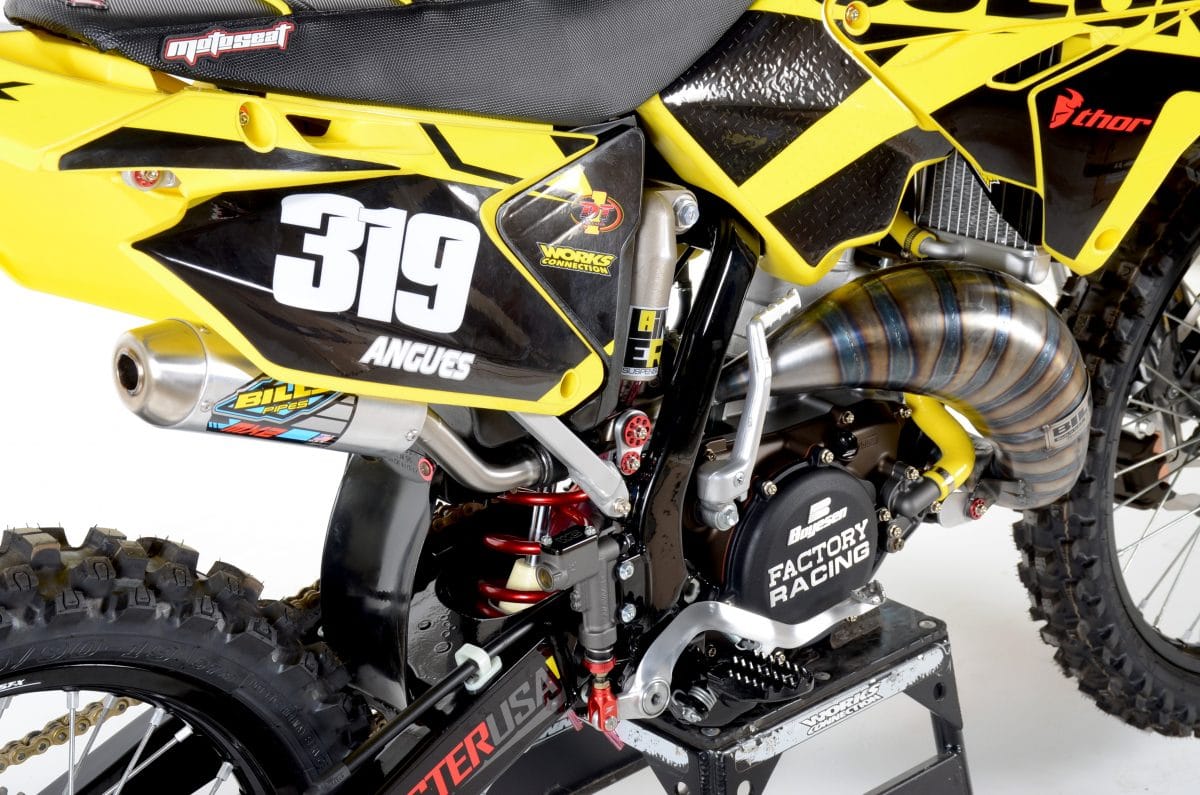 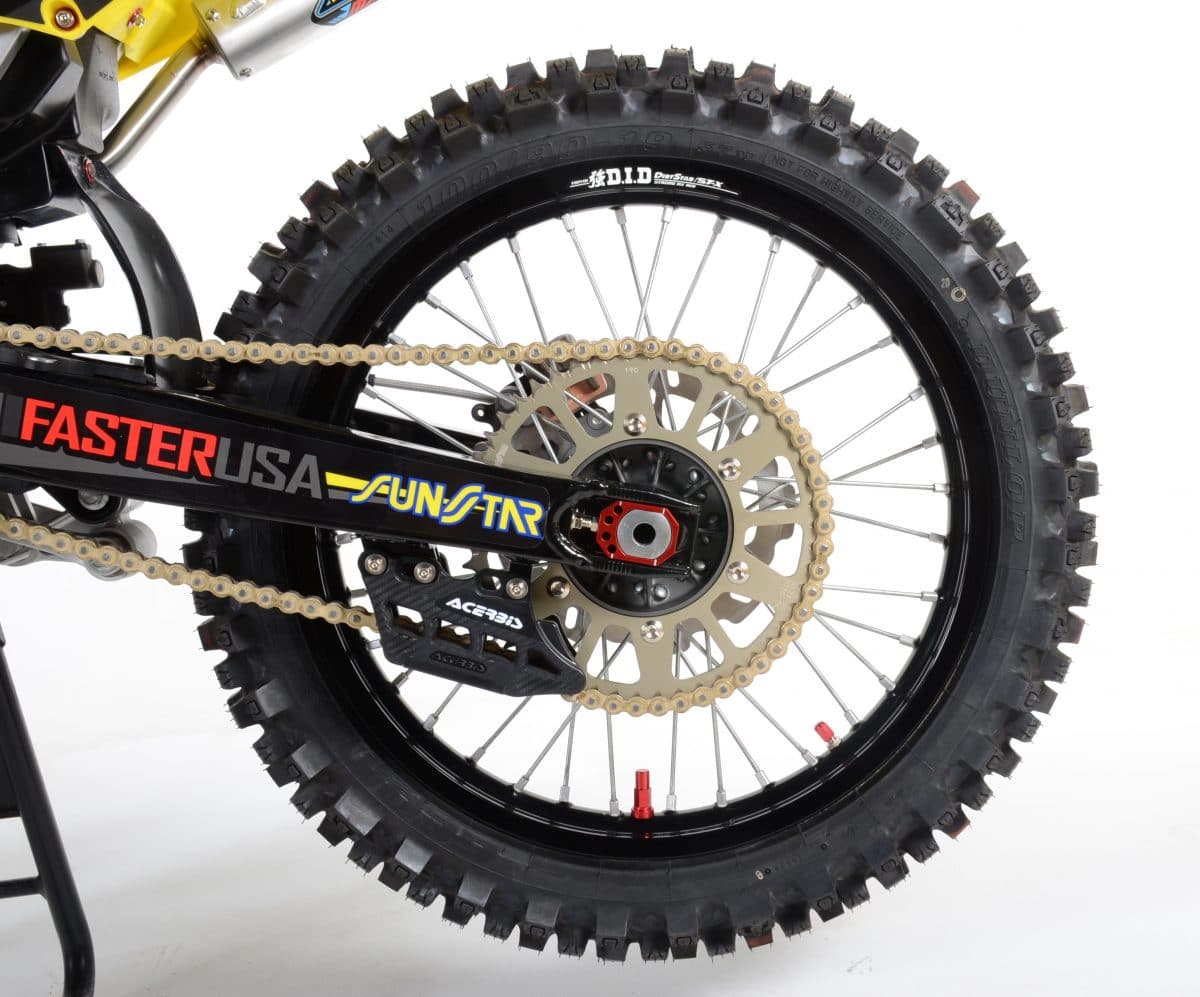 For the suspension I turned to our good friends over at Lainer Suspension. The dated suspension was disassembled, ultrasonic cleaned, valved and reassembled using their latest components.. 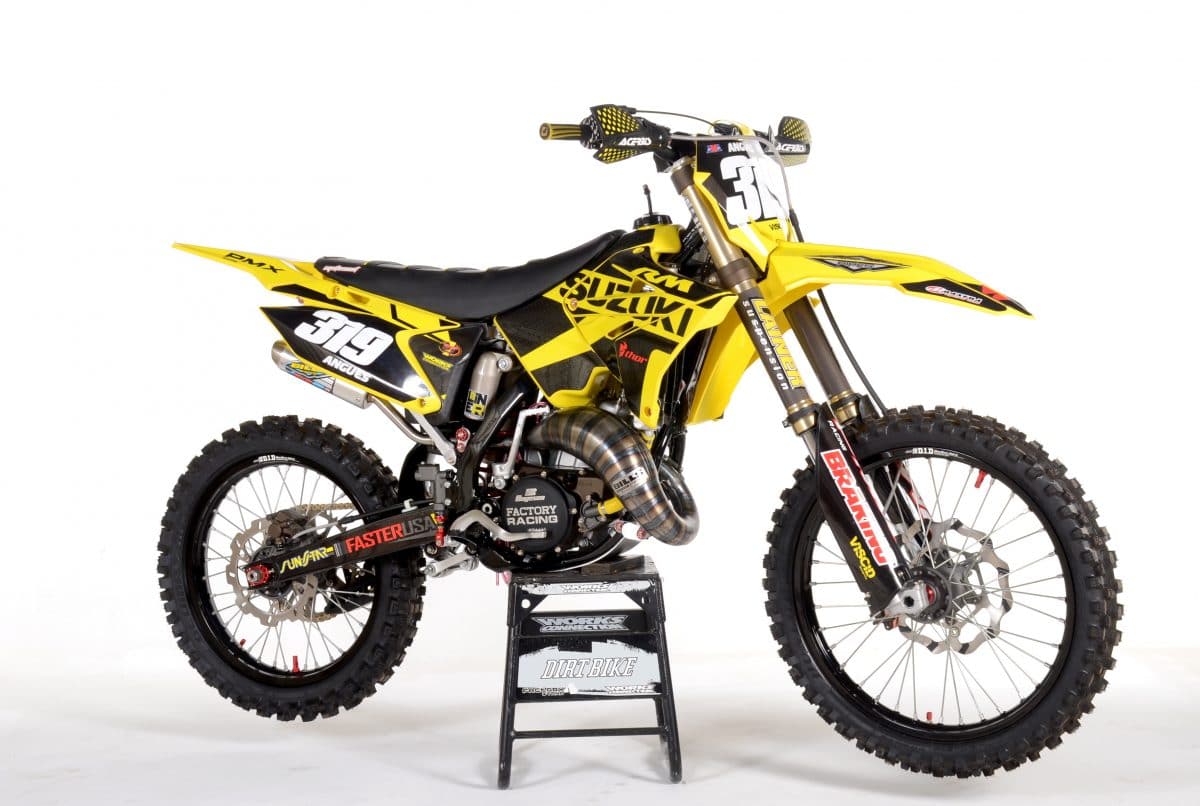 Some of the parts included on this build are as followed :

The story of the Suzuki RM250 isn’t just about a single motorcycle. It’s about a dynasty of bikes, championships and riders that goes back to a glorious era in the history of motocross. Forty-five years ago, motocross was an obscure European sport. In America, we loved flat track and hill climbing. Even in Europe, road racing was a far more popular sport. No one really saw any future in the cult sport of motocross. CLICH THE IMAGE BELOW FOR MORE!

There’s no better project bike than a Yamaha YZ125. First, there are a million of them out there on Craigslist, eBay or any yardsale. Second, it’s been basically the same bike since 2005. You can find an 18-year-old bike and when it’s done, pass it off as a new one. CLICK THE IMAGE BELOW FOR MORE!