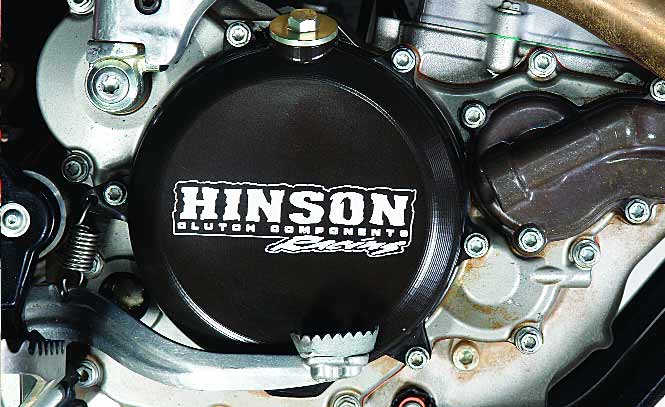 Most of the parts on your bike are hard to improve. This isn’t 1977 anymore; the O.E. makers have learned to do it right over the years. But one very big exception is the clutch. While stock plates on most bikes are of very high quality, the baskets, inner hubs and pressure plates aren’t. Almost all the factory teams don’t even try to use stock components. Hinson Racing has stuff that that they just can’t seem to beat, so that’s what they all use. We just installed a Hinson clutch in our 2009 KTM 250SXF. Here are some of the tips to pay attention to.

1.)
The surface treatment on Hinson’s clutch components is much harder than that of the stock stuff. You can hardly scratch the surface with a awl, whereas stock parts are surprisingly soft.

2.)
After you depress the pistons in the rear brake caliper, you can use a screwdriver to hold the brake pedal out of the way. Then it’s easy to get to all the screws. If you lay the bike on its side, you don’t have to change oil. But come on, you probably need to change your oil anyway.

3.)
After you remove the springs and pressure plate, be careful not to lose the pusher in the center of the hub. Bend the tabs of the central washer flat with a chisel. Then it’s time to use the big gun. If you leave the plates in place, it only takes a little finger pressure on the top plate to keep the hub from turning.

4.)
Now pull out the stack of plates. You can use two of the original spring screws as handles to remove the inner hub. Watch for the big washer underneath. The basket comes out next. Yeah, it’s not brain surgery.

5.)
Here’s where it gets interesting. You have to get the gear off the original basket. It’s riveted in place, so get out the punch, the hammer and the drill. Put a punch mark in the center of each rivet.

6.)
Now use a brand new 1/4-inch drill bit to drill out the rivets. Don’t worry about messing up the big backing plate under the rivets; you won’t be reusing it.

7.)
A Hinson baket comes with new screws and cushions. There’s a light film of oil on the screws when they come out of the package. Use contact cleaner to get them squeaky clean.

8.)
We know you’re smarter than this, but we have to say it anyway. The holes in the new backing plate have bevels for the heads of the screws. Don’t put it on upside down.

9.)
Here is the most important part of the whole process. Use red Loctite (272) on the screws and in the holes of the basket that they fit into. Not blue Loctite. Not Joe’s Tread Magic. Not even an OLD bottle of Loctite. It loses its strength after as little as a few months.

10.)
This isn’t absolutely necessary, but it makes us feel better. Peen the screws with a punch. Put one dot on each side and one in the center of every screw. Now you won’t have to worry about those screws coming loose, ever.

11.)
When you install the basket, make sure that it drops all the way into place. Rotate the basket until you feel the teeth engage the gear underneath.

12.)
You probably don’t have a cool basket-holding tool like this, but we really wish you did. It’s the only way to get the proper torque on the center nut. If not, do your dirty little deed with an impact wrench, but don’t be proud. Don’t forget to bend the washer tab up when you’re done.

13.)
Here’s a fun little secret. You probably don’t need new steel plates. The old ones have been trued and tempered perfectly through hours of use. If you replace them be sure that the new ones aren’t bent, by stacking them up and checking them out.

14.)
Here’s where a good memory pays off. Install the plates just as the old ones came out. On some bikes there are rings that go on first with a special friction plate that sits at the bottom of the stack. Be sure to install the little pusher bearing in the center before you install the pressure plate, the springs and the screws. Torque down the springs to the proper spec (it won’t be much).

15.)
The clutch cover is purely cosmetic, but it’s hard to resist. It never gets ugly, and has the same hard finish as the internal parts.