Photo Special! Blazusiak takes the win and Championship at the Vegas EnduroCross finals 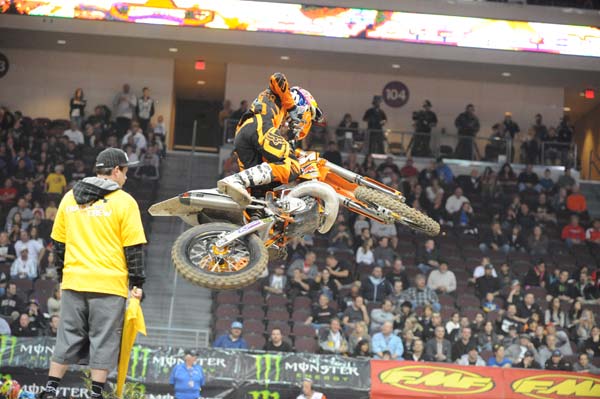 Blazusiak takes the win and Championship at the Vegas EnduroCross finals
Geoff Aaron and Cody Webb round out the podium!

Las Vegas, NV (November 20, 2010) – A capacity crowd filled the Orleans Arena in Las Vegas Nevada and watched KTM’s Taddy Blazusiak win the race and defend his GEICO EnduroCross, presented by E3 Sparkplugs Championship.  Christini/GEICO KTM’s Geoff Aaron finished second in the race and also the Championship for the second year in a row and Cody Webb, the 2010 AMA Trials champion earned his first ever EnduroCross podium.

Taddy Blazusiak got the day started off by barely edging out Monster Kawasaki’s Justin Soule to set the fastest time during the Pioneer hot laps that puts the riders on the track by themselves for a single lap against the clock. Geoff Aaron had the third fastest time.  Those three riders earned the first picks for the heat races and all three also earned quick trips to the main event by winning their respective heats.

Geoff Aaron tried to keep Blazusiak in line, but the factory KTM rider started checking out on the first lap.

Geoff Aaron got aggressive on the start of the main event and pushed Blazusiak a little wide to take the Girardi Wealth Management $750 Holeshot award but Taddy fought back quickly to take the lead.  Aaron stayed close for most of the race to keep Taddy honest but ultimately lost touch.  That allowed Taddy to edge away and take the win.  Cody Webb appeared to have third locked up but Lucas Oil backed Colton Haaker worked his way through the pack to take the position but then had an ugly trip over the bars and ultimately finished fifth.  Mike Brown and Justin Soule also fought for the final podium spot but both had their own issues to ultimately finish fourth and sixth respectively.  Kyle Redmond, Jamie Lanza, Cory Graffunder, Kevin Rookstool and Destry Abbot finished seventh to eleventh.

Mike Brown took the start of his qualifier. Lurking back in the pack is #762 Justin Soule’. They had an epic battle.

Geoff Aaron and Colton Haaker put on a great show during their qualifier.

Destry Abbott takes to the air as Taylor Robert (on Ricky Dietrich’s bike) grabs the start.
Where was Dietrich? Rumor has it he missed a team meeting and was told to stay home.

Brown and Soule’ duking it out hard.

One lap later Justin looks over his shoulder as Browny is still mired in the boulder zone.

GEICO EnduroCross also includes three support classes at each event and the top finishers from the five previous rounds as well as the Vegas daytime qualifiers earned the right to compete for AMA number one plates.  Ty Davis rode his Husqvarna to the 35+ vet class win over Todd Sciacqua and Kurt Nichol.  Luke Reynolds survived a last lap crash in the rock pile to win the Open Amateur class over Mark Mcgregor and Ryan Sandoval.  Multi time AMA Trials champion Patrick Smage won the TrialsCross championship over Bryan Roper and Shad Petersen.

Destry Abbot and Matt Crouch were also honored with “Spirit of EnduroCross” awards for their contributions and commitment to the sport.  Abbot is always a crowd favorite and had a 100 person strong cheering section in Vegas.  Crouch has displayed a serious commitment to EnduroCross by traveling across the country from his home base in Texas to follow the series and help his GEICO teammates get their bikes to all of the races.

Trailer: What if film