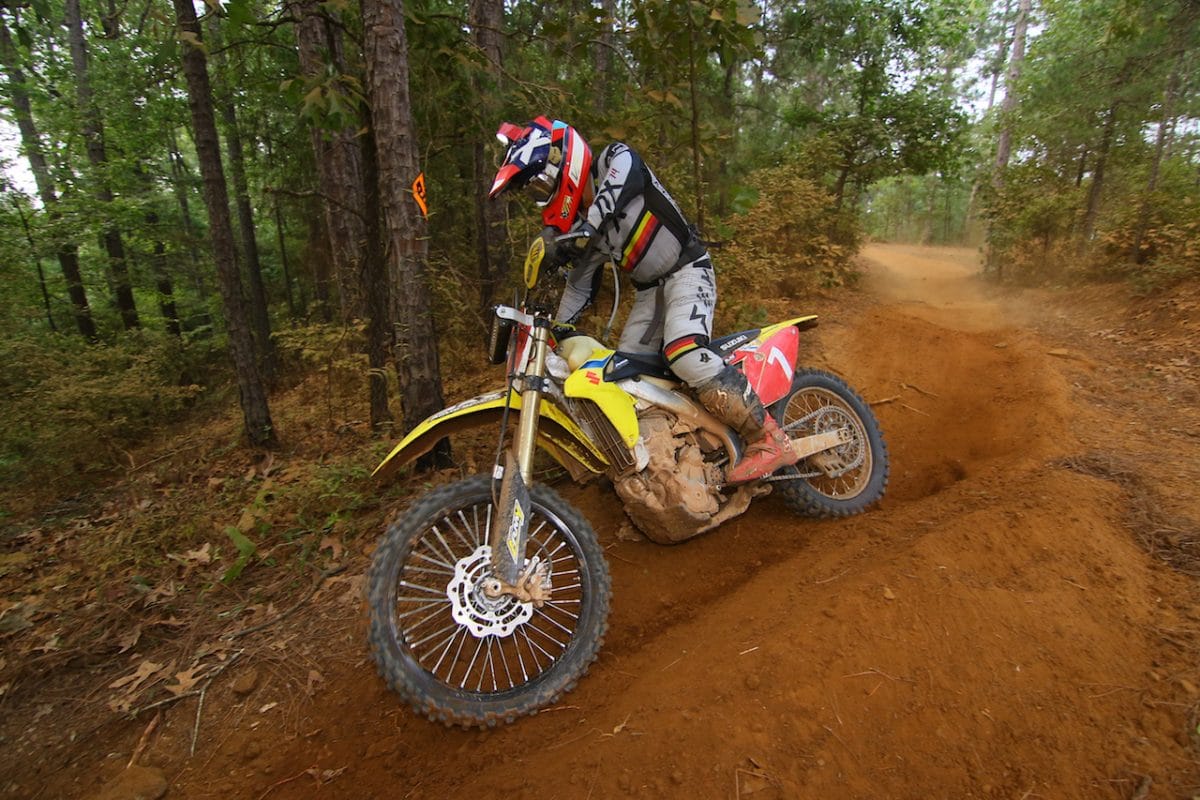 Story and photos by Kenny King

The 17th running of the Perry Mountain 24 Hour Challenge is in the books and this year Team Max Motorsports Suzuki claimed the overall on a 2018 RMX 450Z.  They completed 64 laps with a zero-issue ride for the victory. Suzuki’s Southeast district manager Tim Castrone teamed up with Max Motorsports in Pelham, Alabama to get a Suzuki on the top spot. They put together a team of veterans and first timers including Jase Lewis, Geoff Braico, Scott Keegan, Andrew Matusak, Garrett Edmisten and Joey Baker. The riders would do 3 laps between pit stops. Australian rider Geoff Braico set the fastest lap of the race early Sunday morning with a 19.31 lap. For those not familiar with the race, it all started when a few club members back in 2000 headed to California to ride the Glen Helen 24-hour race. When they got back to Alabama the idea for the race took shape and the race is still going strong. Held in the small town of Maplesville, Alabama, this part of the state is hot and humid in June. The race is usually dusty, this year was no exception. The course was 8.5 miles long and considering this club hosts National Enduros at this same location, it wasn’t a course of fire roads and wide-open terrain, you had to dodge some trees. Pro riders were turning 21 minute lap times and 25mph averages. The terrain is quite varied. Rocky hills to long sections of whoops even sections of a MX track. But the main challenge is the good ole Alabama Heat and Humidity.

In the runner up spot was team NAP XC Gear #2. Consisting of Dalton Riddle, Jeff Covan, Corey Jordan, Will Seivenpipper, Payton Attaway and Michael Ashe riding in the 6 bike Open class. They finished 62 laps on 1 Yamaha, 3 KTM’s and 2 Husky’s. This year the club added the 6 bike class. Each rider got to ride their own bike instead of just one bike for the team. This was a popular option, but it took you out of contention for the money if you finished top 3. They fought most of the race with Team NAP XC Gear # 1, the defending Champs. The team of Brandon Ferguson, Jake Froman, Cole Kirchoff, Tanner McCoy, Zachary Nash and Steve Nicholas lll riding a Sherco 300 SEF-R Factory, started out strong but had their share of problems. They finished 61 laps for third. Right on the heels of the Sherco team was Team Sakai / Victorious Secret 6.0 with riders Cooper Currie, Max Currie, Cameron Reed, Matt Crouch, Evan Chisolm and Trent Whisenant on an S&T Cycles GASGAS EC300 riding in the Elite class. They were in the hunt most of the day until their bike seized and had to be pushed into the pits forcing the use of their backup bike. They finished with 60 laps.

During the early parts of the race things were going smooth. Riders were just getting the feel of the bike and course and trying to maintain constant laps. But, as it always happens, all the drama is at night. Word got to the pits that the Sherco team had lost all the sub frame bolts and the rear of the bike was loose. The rider made it to the pits and the sub frame replaced but with the clock ticking, valuable time was lost and they found themselves down a lap. After a few more laps the gremlins struck the Sherco riders again. The battery was not secured in the first pit stop and had shorted out. Now they were down several laps. Time they just couldn’t make up. During the night, the Max Motorsports team used the 2-lap lead and changed the oil and a rear wheel, other than air filters, the only thing they did.

One of the more adventurous teams was Team BRAAP for Brains riding for the Pediatric Brain Tumor Foundation. Tim Williams rode a Honda Africa Twin, Tod Zacher on a KTM 1090, Christopher Jones riding a BMW HP2 and Harrison Kendrick on a KTM 950 SE. They completed 32 laps. They had a few issues, mainly small ones like the KTM overheating, Africa Twin had Fan problems and the BMW made it a lap then overheated. But the biggest issue riding the course was the whoops according to Tim Williams on the Honda. He said the big bikes don’t handle them so well.

Finishing first In the Ironman class was Eric Meeks on a Sherco 300. He rode an impressive 37 laps. In the Iron woman class was Florida’s Aurielle Henry riding a 1988 Honda XR 200. She rode the old Honda for 25 laps.