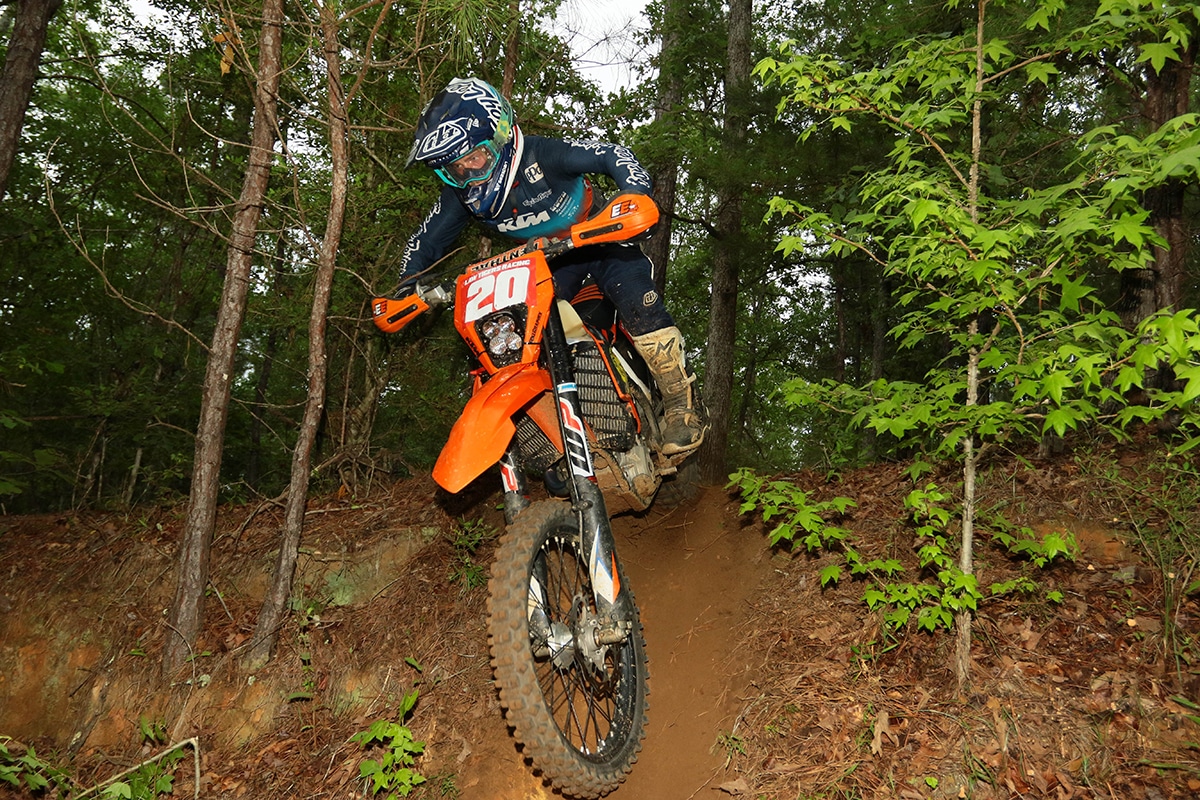 Team NAP/XC Gear Elite ( Andrew Clark (SCO),Josh Vender (KTM), RJ Cook (KTM), Steve Nicholas (KTM)) took the overall win a the 19th running of the Perry Mountain 24 hour challenge. The  Elite team completed 56 laps  with the fastest average lap time of 25:28 dominating the race from start to finish with a 2 lap lead over the runner up team. “ We tried to just ride consistent, we knew it was going to be a long race. With each rider doing 3 laps. It was a little dusty at first until the rains came. Mostly It was pretty uneventful except for a few light issues during the night” said Andre Clark. The Perry Mountain club missed putting on the race in 2020 due to issue related to Covid. This year the club  had a near record turnout with almost 100 teams signed up. Usually this time of year in Alabama, its hot and dusty, This year temps were a bit lower in the high 80’s, but for the first time in many years rain was on the forecast. The course was 9.5 miles of tight Alabama woods with fire roads and  a few gnarly hills that caused a few riders problems when the rains came.

In the number 2 spot was team Blue Calf Semi-Factory Racing, riding in the expert class. The team  consisted of Tommy Hill (KTM), Alex Mitz (HUS), Clay Lyons (YAM), Kurt Lucas(KTM), Shawn Clark(YAM),  and Martin Cox(KTM) .They came all the way from South Florida finishing with 54 laps, and an average lap time of 26:55. “ Our race went pretty good, we got the hole shot and battled with Team NAP/XC Gear. Then one of our riders fell into a creek and we lost a good bit of time there and had to work our way back. Then one of our riders got food poisoning and left us with 5 riders. There were a lot of whoops on the course, But not as big as the ones were used to riding in Florida.” Said Tommy Hill.

Rounding out the podium was  Team Law Tigers/MAX Motosports riding in the expert class. The team consisted of (Jase Lewis(HUS), Neal Ousley (SUZ),Grady Faint(KTM), Tyson Miller(Suz),Nick Ragland (YAM), Ty Roberts(HUS). They completed 54 laps as well and finished right behind the number 2 team.  “ We didn’t have any real issues at all, on the next to the las lap we got passed by the number 2 team and then we had to pit. We just weren’t able to make up the time and lost 2nd by a minute and a half. It did get sloppy after the rain and there were a lot of riders stuck on some of the hills which was thought at night.” Said Neal Ousley

Perhaps the most remarkable ride of the race was Team AHRMA Dream Team. Made up of some of the 80’s and 90’ fastest riders. Terry Cunningham, Trampas Parker, Fred Hoes and Tommy Veator all former champions racing wonderfully restored 1983 Husqvarna air cooled bikes. With Cunningham on a 430 Auto. “My race was pretty uneventful, just typical Alabama riding. I was blessed by the lord to get rain every time I went out to keep me cool. “ These guys finished 7th overall with 50 laps. Fred Hoess led the team one lap one. “ I had a bit of a mechanical on lap one and that put us back right off the start. “ The mechanical was a seized engine and a tow back to the pits. They were 3 laps down and dead last after one lap.

Trampas Parker, former world motocross champion piloted a 430 Husky and rode the most with 16 laps with a 26:34 lap average. “ By the time they got us back in the pits we were 97th overall. We just wanted to get back in the race and try for a top 10.” Said Parker. Perhaps Tommy Veator said it best “You just can’t ride old bikes and not have fun”

In the Iron-man class, Jordan Whitmer on a Kawasaki rode 35 laps and Caroline Kent with the Iron-woman win with 17 laps and the best team name with “ Somebody help my husband with the babysitting please.” 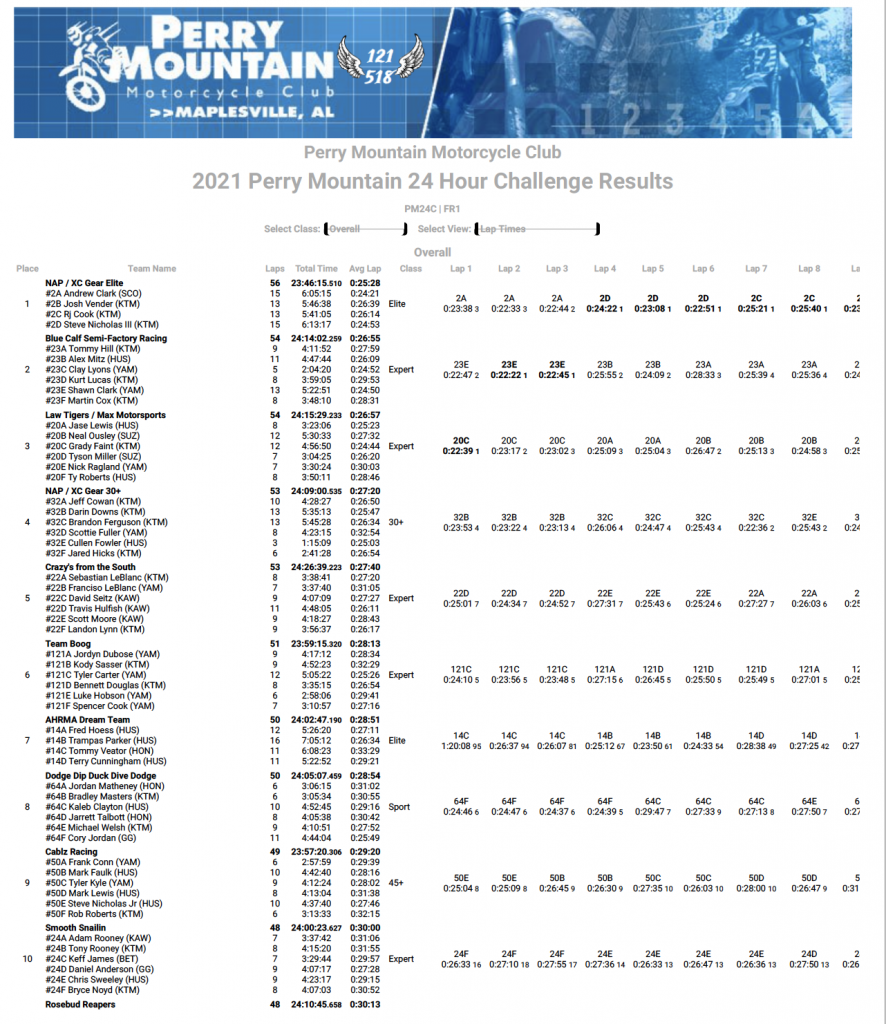