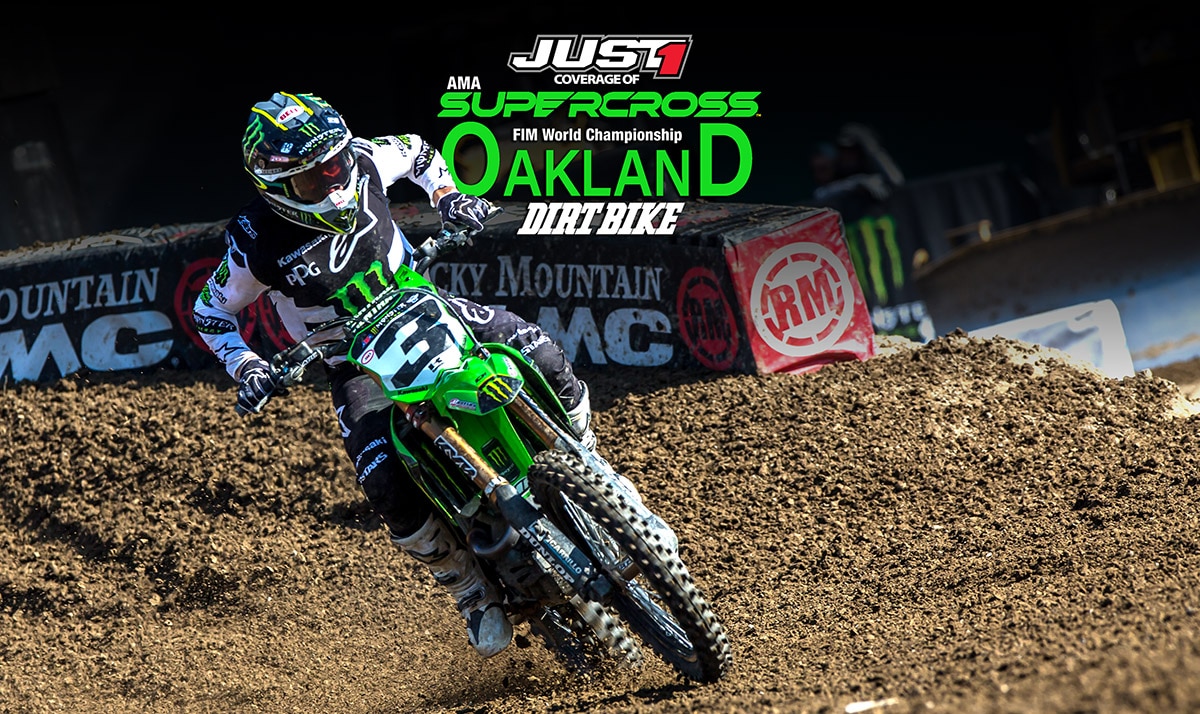 Eli Tomac made a statement that he is not going way any time soon. In round 5 of the 2020 Monster Energy Supercross season, he battled with points leader Ken Roczen wheel-to-wheel in the main event at the Oakland Coliseum and came out ahead. Cooper Webb also reignited his season with a  last lap charge that lit up the stadium. For extended coverage of the 2020 Oakland Supercross, click here.

Ken Roczen got the start but Adam Cianciarulo and Eli Tomac were right there, setting up a rare showdown  with all the fast guys up front. Cooper Webb was  there as well, and he made a few attempts at passing Tomac. Behind them, it was Zach Osborne, Justin Hill and Jason Anderson. Blake Baggett and Justin Barcia were buried in the pack.  As the race opened up, Webb lost some time to Tomac, while Roczen maintained a small gap over Cianciarulo.   Around the halfway mark, Tomac forced a pass on his teammate, but the three riders still rode at about the same pace. Suddenly it seemed like Tomac found a little more speed and he took the lead. Then he put in a few hot laps, gapping Roczen by a few seconds. By this point in the race, Webb and Jason Anderson were battling for fourth, while sixth was anyone’s race between Justin Barcia, Justin Hill and Dean Wilson. With five minutes to go, Tomac went over a berm and lost the lead. He wasn’t done, though. Within a couple of laps, he was racing wheel to wheel for the lead again. In the last few laps, everything closed up. Tomac retook the lead, and Cooper Webb absolutely caught on fire. He passed Cianciarulo and then closed in on Roczen. In a dramatic last- turn showdown. Webb slammed Roczen and took second. Roczen took the hit and stayed up, but seemed slightly hurt–it was either his foot or his pride.

Eli Tomac and Ken Roczen were both in heat one making for a loaded race. It was Roczen who took the holeshot, but Tomac took the lead almost immediately. Then Roczen took it right back. Blake Baggett hooked on to the two of them and they quickly pulled away from Vince Friese, Zach Osborne and Malcolm Stewart.  Baggett didn’t let Roczen and Tomac get away and it was an intense three-way battle for the whole race. With two laps to go, Tomac stalled briefly and lost a spot to Baggett. That fired up Baggett, who made a number of attempts at the lead. Tomac got back into it at the start of the final lap, repassing Baggett for second. Roczen withstood all the chaos to win ahead of Tomac and Baggett, with Stewart a good 10 seconds back.

Justin Hill got the start while Jason Anderson  tangled with Ryan Breece and dropped back to last. Adam Cianciarulo also went down on the first lap, leaving Hill all alone up front.  Aaron Plessinger had the number two spot for a while with Justin Brayton and Justin Barcia right behind him. Cooper Webb passed them all on the fourth lap and stated eat into Hill’s gap. Barcia and Brayton also passed Plessinger.  In the late laps, Cianciarulo and Anderson moved into  transfer spots, and Barcia pulled off the track with a blown engine. His crew would have a very short time to replace the motor for the Last Chance Qualifier.

The motor swap went as smoothly as it cold have for Justin Barcia’s crew and he was on the line for the Last Chance Qualifier with plenty of time to spare. His start wasn’t the greatest, but he was in the lead before a lap was complete. Dean Wilson was also in the LCQ, and soon the two of them were safely in qualifying position with Cade Autenrieth third. Alex Ray provided most of the drama in the race by passing Jason Clermont on the final lap.