ON THE ROAD AGAIN BACK TO THE DESK 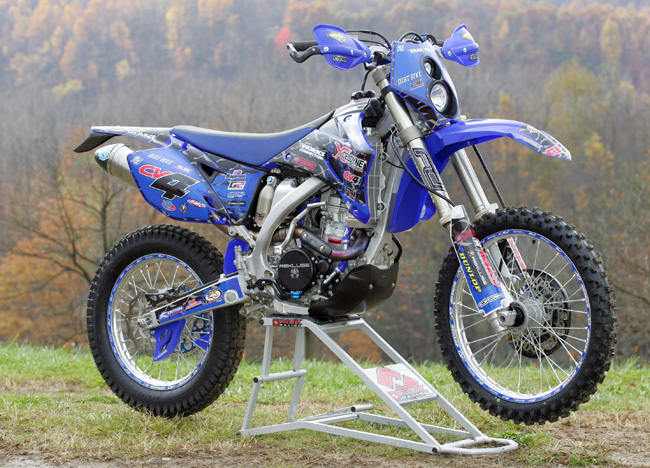 Look for this machine in an upcoming issue of Dirt Bike. It was one slick 2008 WR250.
October was a super duper month with three days of riding in Idaho, another two in Ohio for the eighth annual Turkey Run and some ballistic testing days at moto tracks and my favorite off-road locations. But like all things good, they have to come to an end, or at least be put on hold for a few days. For me it’s that time of month when the office is home and the keyboard is the tool for arm pump. Of course as soon as deadlines creep closer the weather turns in favor of off-roading with rain and snow in the hills. My mighty Sprinter always holds a moto bike, an off-road machine, gear and gas just incase the power goes out at the office and I simply can’t get in the building. Much to my dismay, the rolling blackouts of California aren’t happening right now.

Boothy got home from his Ohio travels in time to dress up Baby Boothy like the famous Chucky. Don’t worry, it was a plastic knife.
When I floated out of LAX on my way to Ohio last week it was 80 degrees. When I woke Saturday morning for the Turkey Run at Crow Canyon it was 34 degrees with light rain. I hooked up with the crew from CV4 and a sweet rebuilt 2008 Yamaha WR250. We spent two days riding the trails of Crow Canyon in what people from Ohio call mud, but I swear it was more slippery than ice. Nearly 1000 riders visited Crow Canyon over the two day event and KTM was on location doing demo rides on all the 2012 machines, both motocross and off-road. The demo rides were free and it is always a big success. I flew home on Halloween and was happy to see some of the airport staff dressed for the occasion but seeing a zombie take your boarding pass while boarding the germ tube isn’t an equation for relaxation. As soon as I could I called everyone I had just roosted with in Ohio and let them in on the good news, I was driving home in 75-degree weather. I think AT&T was having typical coverage issues because the line kept going dead.

Testing ESP suspension on our KTM 530EXC.
The winter weather is finally here in southern California so I’ve been hitting the local spots with firefighter Joel and an old friend from way back in my BMX days, Michael. We’ve been beating on tires, stabilizers and testing lights on our night missions. Trust me, it’s all in the name of work, there is absolutely no fun in spending hours in the dead of night exploring new trails. I can always count on Joel to say yes to a ride, even when it’s raining and snowing. For Joel, the more adverse the situation the more fun it will be, which can end sort of badly. We once had a Husaberg eaten by a bear. Next stop? Vegas for the final round of the EnduroCross where I’ll be racing in the vet class along side my good buddy Tod Sciacqua, who is clearly faster than me but I’m not above a friendly take out move given the chance.  Here are some photos of what’s been going with one third of the Dirt Bike staff and keep an eye out for a silver Sprinter ducking and weaving through traffic heading towards the mountains, especially if there are dark clouds overhead.

Ohio mud is beyond slick but somehow still gets stuck everywhere.

Boothy hasn’t been over eating; his under jersey chest protector isn’t flattering.

Polisport light for our WR450.

We’ve put hundreds of miles on the Fastway stabilizer and are loving it. Check out the February issue for a full test.

We’ve learned what happens to a trials tire when a blown out Mousse insert is used. Uh where did the knobs go?